45 automatic colt pistol ammo is the perfect complement for your 1911 pistol or other 45 ACP chambered handgun. You'll generally find .45 auto ammunition for sale loaded with bullets that range between 185 grain and 230 grain, with the 230 gr. variety the most common.

Check out our full line-up of in-stock .45 cal ammunition for sale with full metal jacket (FMJ) and lead round nose bullets and also jacketed hollow point (JHP) rounds ready for your next trip to the range. Shooters looking to get some practice or training time in will likely lean toward a full metal jacket projectile while those looking for a round they can rely upon for self defense will want to get a more sophisticated jacketed hollow point bullet that is designed to expand upon impact with its target. In either case, check out our line-up of cheap 45 Auto ammunition available in the bullet categories laid out below:

There really is no difference for these terms, as they are largely used to describe the .45 ACP, which is the official name of the cartridge. When someone says “.45” in reference to ammunition, they are usually referring to the .45 ACP. The same goes for “.45 Auto,” as “ACP” stands for “Automatic Colt Pistol.” However, they may be referring to the .45 GAP, which stand for “Glock Automatic Pistol.” The GAP, however, is much less common than the ACP. 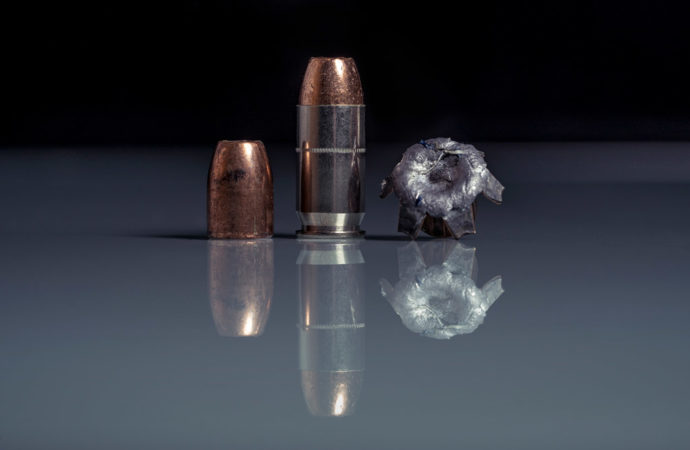 Is 45 ACP Good For Self-Defense?

Generally speaking, 45 ACP is a slow handgun cartridge but it delivers a lot of energy down range. This makes it a great choice for self-defense shooters. We tested several 45 ACP hollow point options with ballistic gelatin to see how they performed. Find out the best options for 45 ACP self-defense ammo here.

No. Unlike other cartridges (the .38 Special and .357 Magnum, for example), these two cartridges are not interchangeable at all. The .45 ACP was created by Colt’s Manufacturing Company for their line of pistols, while Glock created .45 GAP ammunition for their own products. These cartridges have different dimensions, most noticeably a vastly different overall length.

How Far Can a .45 ACP Effectively Shoot?

The .45 ACP is an effective handgun round for target shooting, but it is generally limited to about 50 yards of effective range, a fairly common maximum distance for handguns. For example, the Gold Medal rounds with 185-grain FMJ bullets (a light bullet for this cartridge), when zeroed to 25 yards, will drop 3.1 inches at 50 yards and almost two feet at 100. This makes using the .45 ACP at distances over 50 yards extremely difficult. You can learn a lot more about the caliber's capabilities in this 45 ACP Ballistics guide.

Is the .45 ACP Ideal for Self-Defense?

Yes. The .45 ACP can deliver effective speed and velocity for personal and home protection. The cartridge has muzzle velocities generally in the range of 800 to 1,100 feet per second, and can go even higher if you are firing +P ammunition. It also delivers muzzle energies approaching 500 foot-pounds, which drives effective penetration and expansion to the target. The only downside for .45 ACP is that it may be too large for some conceal-carry users and could have too much recoil for effective secondary shots. If you are using the .45 ACP for self defense, you will want expanding rounds such as jacketed hollow points.

That depends on what you want from your cartridge. If you value sheer strength and stopping power above all, the .45 ACP is your best option. However, the 9mm Luger ammunition is a compact yet powerful cartridge that is ideal for many gun owners.

Which Firearms Commonly Load the .45 ACP?

While there are many weapons that can load the .45 ACP, the most famous is the 1911-style semi-automatic pistols. These firearms can be chambered for many different calibers, but the 1911/.45 ACP relationship is one of the most famous and successful gun/cartridge combinations in the world.