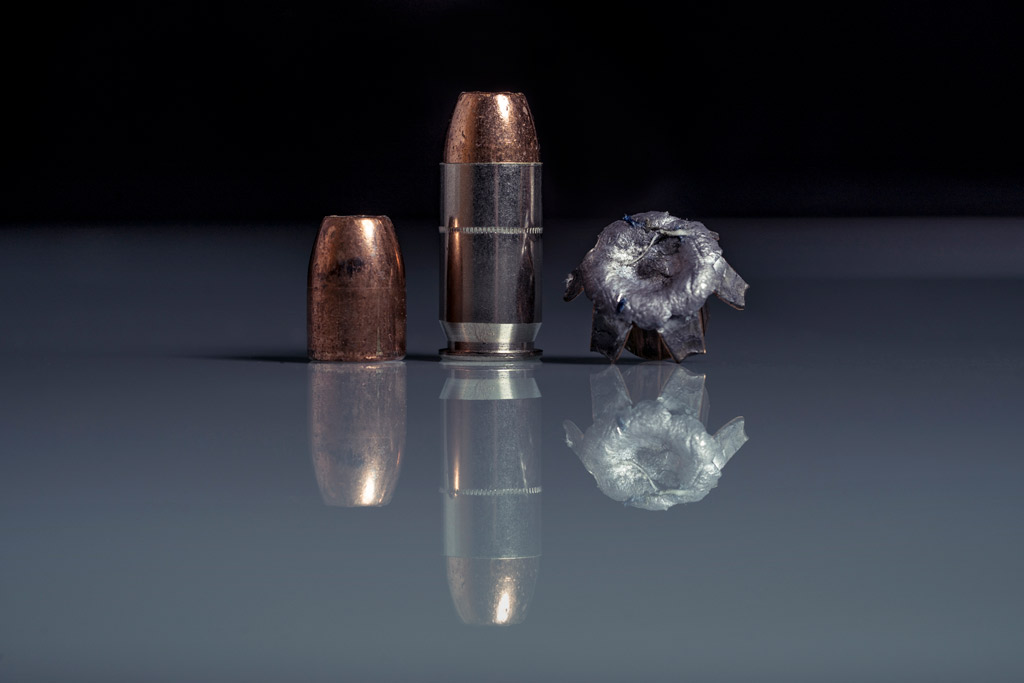 We analyze the results of dozens of ballistic gel tests to showcase some of the best performers in 45 ACP ammunition.

When considering the best 45 ACP ammo for self-defense available today, it makes sense to first understand the history of the cartridge.

The .45 ACP has more than a century of history, but despite its age, it remains one of the most popular rounds for personal defense and target shooting; it’s still used by some military and law-enforcement personnel to this day. First released in 1905, a United States Army request for a stronger cartridge sparked the caliber’s birth.

The original .45 ACP carried a 200-grain bullet and was matched with the Colt Model 1905, although a 230-grain bullet became standard after more testing. Combining accuracy and stopping power, the .45 ACP became an effective round for combat and self defense. It was used extensively by 20th-century law enforcement and military personnel, and became the standard round for 1911-style semi-automatic pistols.

Today, the .45 ACP remains an effective self-defense cartridge, but to get the best performance for your needs, you have to choose the right round. To determine the best 45 ACP ammo for self-defense, we invite you to explore the following analysis.

Performance Standards from the FBI

There are many variables in self-defense ammunition, and some people place a greater emphasis on certain ballistic stats than others. For example, one person may prioritize expansion diameter, while another prioritizes delivered energy. One of the best resources for this debate is the Federal Bureau of Investigation. According to their standards, self-defense rounds should penetrate 12 to 18 inches during ballistics testing. This penetration range, they say, provides the best results, as too little (less than 12 inches) may not stop a threat, while over penetration (over 18 inches) will result in unwanted downrange damage, injury, or even death.

Penetration is an essential factor for self-defense ammunition. Without consistent, deep penetration, a shot will not be able to reach the vital organs, which is crucial for stopping a threat as quickly as possible. Without penetration, there will also not be enough blood loss to reliably drop an attacker. How much penetration do you need? According to the FBI, a self-defense round should deliver at least 12 inches of penetration during ballistics-gel testing in order to reliably stop a threat. However, they recommend that bullets not penetrate more than 18 inches, which would be considered “over-penetration.”

Over-penetration is a concern for anyone who own a home-defense weapon or carries a concealed-carry handgun. If a bullet over-penetrates, either through a target or through a barrier, it could cause damage, injury, and even death to someone downrange. With the FBI’s standards in mind, we first looked at the deepest-penetrating rounds that do not go over 18 inches of penetration. There were many round that went over, with the highest penetration reaching almost 25 inches. 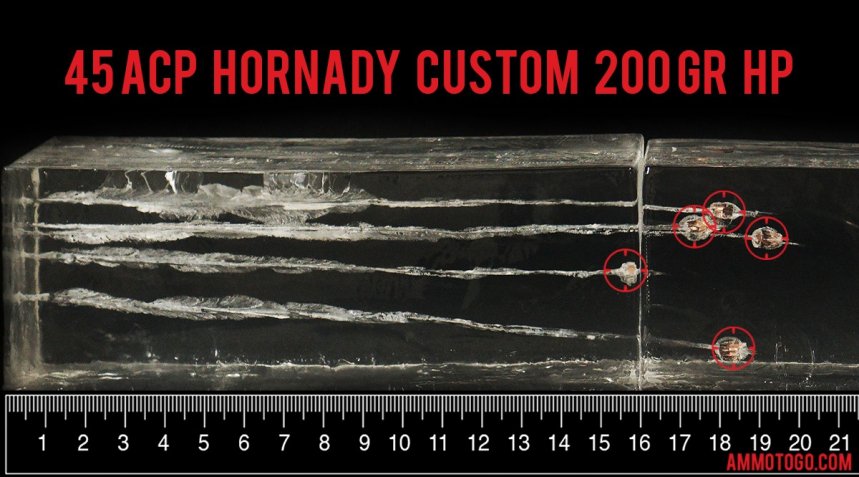 Deepest penetration not over 18 inches:

Shot diameter is another important factor for stopping a threat. This refers to the expansion of the round once it strikes the target, a factor that is enhanced in hollow point rounds, which are specifically meant to expand on impact. Essentially, the larger a bullet expands, the more effective it will be for stopping a threat. Bullet design, however, is not the only factor that will drive expansion.

Bullet speed also enhances expansion; generally speaking, the faster a bullet is traveling when it strikes, the better it will expand. A lack of speed and energy can lead to less expansion, creating concerns for self-defense cartridges. The ideal shot diameter is considered 1.5 times the bullet’s original diameter. .45 ACP bullets have a diameter of .451 inches, so your self-defense cartridges should deliver an expansion of at least .676 inches. For shot diameter, there is no maximum range like you find with penetration. To make our list, we looked at the largest expansion among all bullets that fell within the FBI’s standard penetration range.

Largest diameter for rounds with 12-18 inches of penetration:

Although it may not be considered as essential as penetration and expansion, velocity is important for your self defense weapon. Velocity ensures that your bullet is striking the target with enough energy to drive both penetration and expansion, as well as release enough energy into the target, creating greater knock-down potential. To make this list, we once again looked at the top rounds that fell within the FBI’s standards for penetration.

There were, for example, two that were in the top five, but were left off because one did not penetrate enough and the other penetrated too much.

Highest-velocity rounds for all products in 12-18 inch penetration range:

Other Factors to Consider

It seems that no “best ammo” sort of article would be a fair analysis without a few caveats. These aren’t necessarily cop-outs if you’re looking for advice but rather variables that each individual shooter should consider as they look to select the best 45 Auto ammo for themselves.

We’re basing our suggestions to you on a set of tests conducted with a 4″-barrel. This is a fairly standard barrel length and some folks are even able to use it for concealed carry. If you carry a snub-nosed revolver or a 5-inch barreled pistol, the ammo will likely perform differently in your firearm than what we saw in our testing. 4″ provides a good baseline but certainly isn’t the end-all, be-all.

There are essentially two schools of thought when it comes to overpenetration.

A.) If you go through your target, you can be a threat to others in the vicinity

B.) Better to have enough power to go through your target than not inflict enough damage

Look, we get it. Some shooters aren’t worried about overpenetrating with their 45 ACP ammo. That’s fine and we can certainly appreciate the desire to have all the firepower you can muster when trying to stop an attacker. For the purposes of this analysis, we are sticking with the FBI’s recommendation. To learn more, here is a good resource on the downside over-penetration as well as a resource claiming this risk is overblown.

Final Thoughts: What’s the Best .45 ACP Round for Personal Defense?

After looking at the data, we can reliably recommend a few cartridges as the best 45 acp ammo for self-defense, especially the Winchester Ranger Talon with 230-grain hollow points.

This cartridge had the best expansion (.91 inches) among all 31 products and fell in the FBI’s preferred penetration (14.18 inches). For this reason, it may be the best .45 ACP round that was tested, but other great options include the Federal LE Tactical products. As long as you choose a round that has expansion higher than .675 inches and penetration within 12 to 18 inches, you will have a reliable, trustworthy .45 ACP for personal protection.