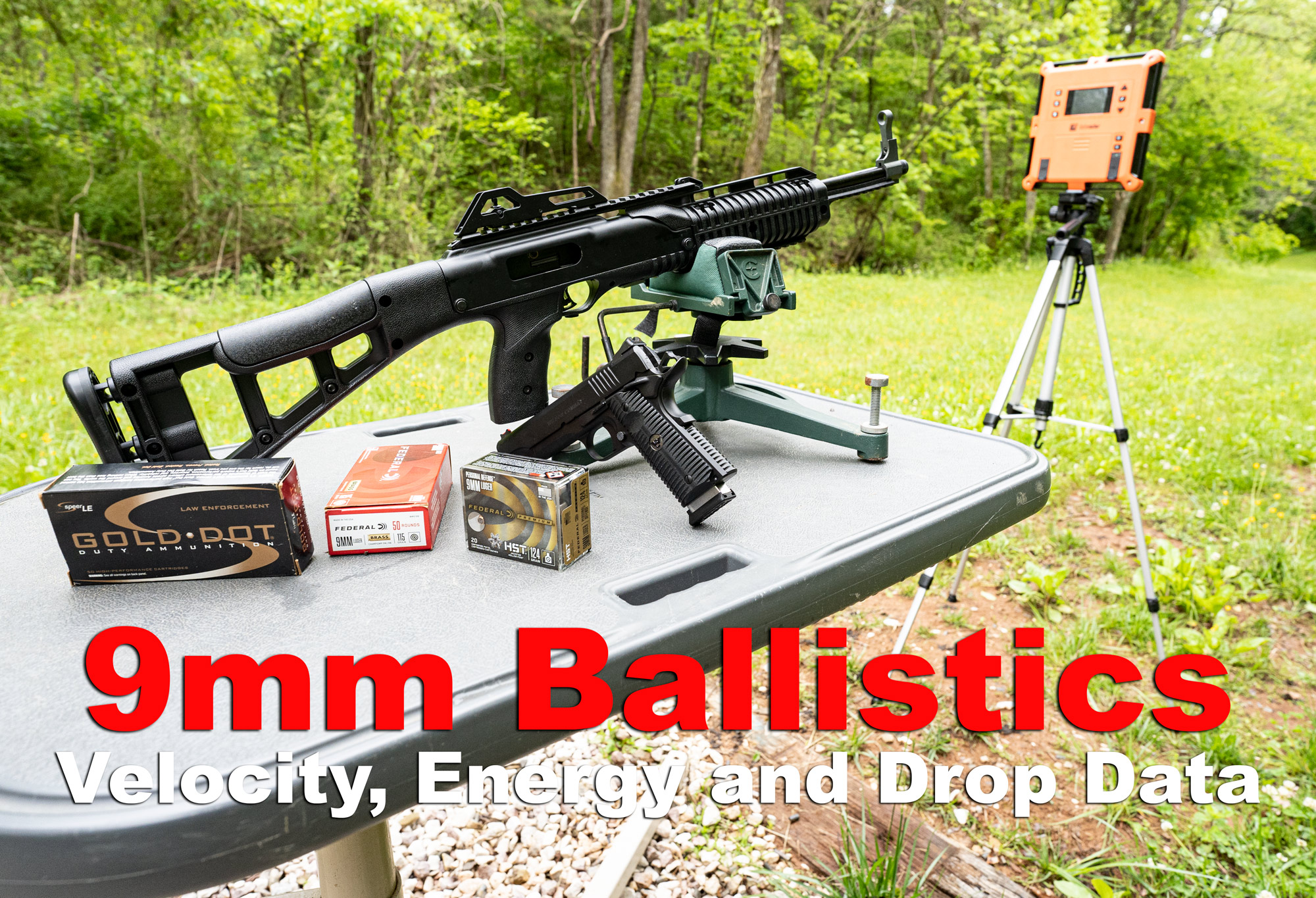 An in-depth look at 9mm ballistics. We’ll cover the caliber’s capabilities and offer velocity, energy and bullet drop data for the most popular 9×19 loads at AmmoToGo.com.

9x19mm Parabellum is by far the most popular handgun cartridge for self-defense in the world. With advancements in technology since its introduction at the turn of the 20th century, the 9mm is able to deliver similar terminal performance to rounds with heavier bullets such as the 45 ACP and 40 S&W. The 9mm’s lower cost and recoil make it an even more attractive solution for effective self-defense. But what can you expect when it comes to 9mm ballistics – velocity, energy, etc.?

Factory loaded rounds are most commonly available with 115, 124, or 147 grain projectiles. As the most popular handgun cartridge, 9mm ammo is available with every conceivable type of projectile including frangible, shot, rubber, and blank.

While not typically considered a hunting round by any means, the 9mm is effective for varmints and even deer hunting with a suitable bullet.

The 9mm was developed by Georg Luger in 1901, who based it upon his earlier 7.65×21mm Parabellum. He removed the bottleneck from the predecessor’s casing to meet the German military’s demand for a larger diameter projectile. Luger presented his new round to both Great Britain and the U.S. before it was adopted by the Imperial German Navy in 1904 and the German Army four years later.

The 9mm earned international attention following WWI, partly due to its relatively small dimensions that permitted the design of high capacity magazines. As the semi-automatic handgun gained traction in the late ‘60s and early ‘70s, so too did the 9mm. It effectively supplanted the 38 Special for police use thanks in large part to its superior ballistics and functionality in semi-auto firearms. According to one major online ammo retailer, in 2013 the 9mm accounted for 21.4 percent of all ammunition sales, beating out 223/5.56 by nearly six percent. It is therefore not only the most popular handgun cartridge in America, but very likely the most popular cartridge period.

Luger designed his original 9mm to be lethal at 50 meters. Today, modern incarnations of his cartridge significantly exceed that limit.

A 9mm round’s ballistics depend upon which of the three common bullet weights it’s equipped with:

Bear in mind that these numbers vary by manufacturer. Those who prefer lightweight 9mm projectiles enjoy lower recoil; If you select heavier bullets benefit from deeper penetration of the target. Fortunate enough to equip your firearm with a suppressor? You’ll do well to pick heavier bullet weights that convey a subsonic muzzle velocity.

What About 9mm Carbine Ballistics?

If you’re firing 9mm ammo with a pistol caliber carbine, expect to get another 5-10% velocity out of your ammo.

Obviously, the increased velocity will impact terminal ballistic performance. If you’re shooting a hollow point at a soft target, the extra ~100 feet per second from a carbine will give you a slightly different wound channel than firing the same ammo from a shorter-barreled pistol.

Regardless of its bullet weight, the 9mm provides just the kind of flat trajectory that is most conducive to accurate shooting. Bullet drop tends to range from 10 to 12” at 100 yards. That’s likely more distance than you’ll need for self-defense.

9mm loads frequently deliver a muzzle energy greater than 300 ft lbs. That’s the amount of energy even cautious self-defense experts consider adequate for self-defense. And because 9mm ammo is so relatively inexpensive, it permits its shooter to practice longer and more often. Since the shooter is the main determinant in any weapon’s efficacy for self-defense, that is possibly the 9mm greatest strength.