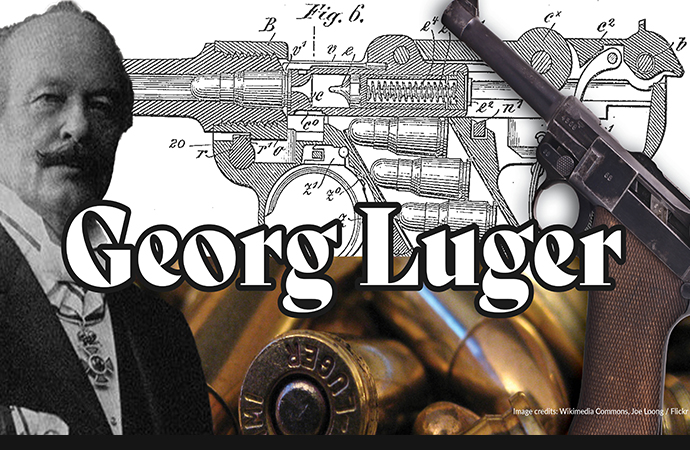 A look at the life and contributions of Georg Luger, father of the modern 9mm cartridge.

In the world of firearms, several legendary names stand out from the crowd – Samuel Colt, Richard Gatling, John Moses Browning, Mikhail Kalashnikov, Eugene Stoner. These men changed the course of history with firearms and cartridge innovations. But you’d be shortsighted not to include Georg Luger among them.

When it comes to enduring legacies, Georg Luger certainly deserves a place among the ranks of influential firearms innovators. The inventor of the iconic semi-automatic pistol bearing his name and the mastermind behind the world’s most popular cartridge (the 9x19mm Parabellum), Luger’s life left an enduring mark in history and on the arms industry.

Georg Johann Luger was born on March 6, 1849, in Steinach am Brenner, Tyrol, a spot located in what was then the Austrian Empire just over the border from what is modern-day Italy. After his birth, Luger’s father, Dr. Bartholomaeus von Luger, moved the family to Italy. Luger grew up speaking both German and Italian. He attended the Wiener Handelsakademie (Vienna Commercial Academy), the predecessor to today’s Vienna Business School.

Luger volunteered to serve in the military as a Reserve Officer Cadet with the 78th Infantry Regiment in 1867 and was promoted to Ensign the following year. His respectable marksmanship landed him at the Austro-Hungarian Military Firearms School at Camp Bruckneudorf, where he eventually became an instructor. There, Luger’s interest in automatic loading systems was born.

After leaving the military in 1871, Luger became an accountant. He may have lived out a regular humdrum life as a businessman if he hadn’t met German engineer and small arms designer Ferdinand Ritter von Mannlicher in 1875. The two worked together on magazine designs, which led to Luger leaving his dull life of accounting to work for Ludwig Loewe and Company (which later became Deutsche Waffen und Munitions Fabriken, more commonly known as DWM), a weapons and munitions company in Imperial Germany.

Luger patented his semi-auto, breech-loading pistol in 1898. The pistol featured a forward-angled grip for excellent “portability” and a delayed blowback system to help manage recoil. Luger also shortened the cartridges used in his pistol, which made the grip narrower and easy to hold onto. The new cartridge was dubbed the 7.65x21mm Parabellum in Europe and the .30 Luger in the United States. 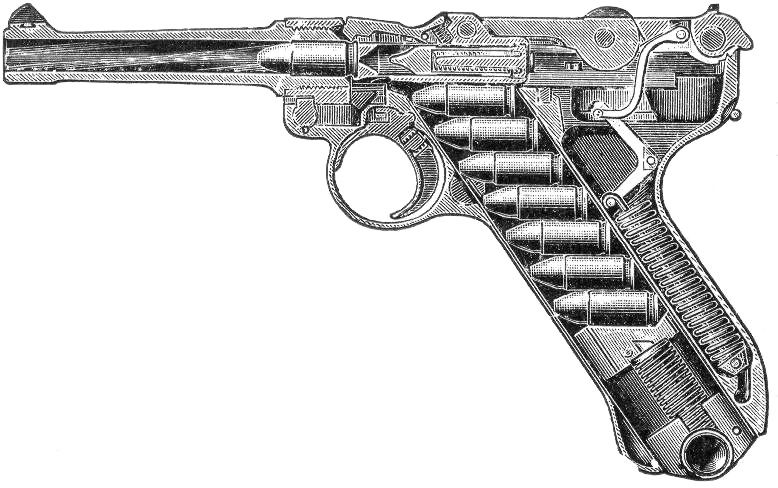 Parabellum, by the way, is derived from the Latin phrase: Si vis Pacem, Para Bellum (If you seek peace, prepare for war). This was the motto of the cartridge’s manufacturer, Deutsche Waffen- und Munitionsfabriken (DWM).

At the time, the Luger pistol was a major advancement in firearms technology. It replaced the German Reichsrevolver in 1908 (explaining the gun’s alternative names P08 and Lange Pistole 08). The German military used the pistol until 1938. The DWM built more than 198,000 Luger pistols between 1913 and 1918. After 1918, the Treat of Versailles limited the pistol’s production. 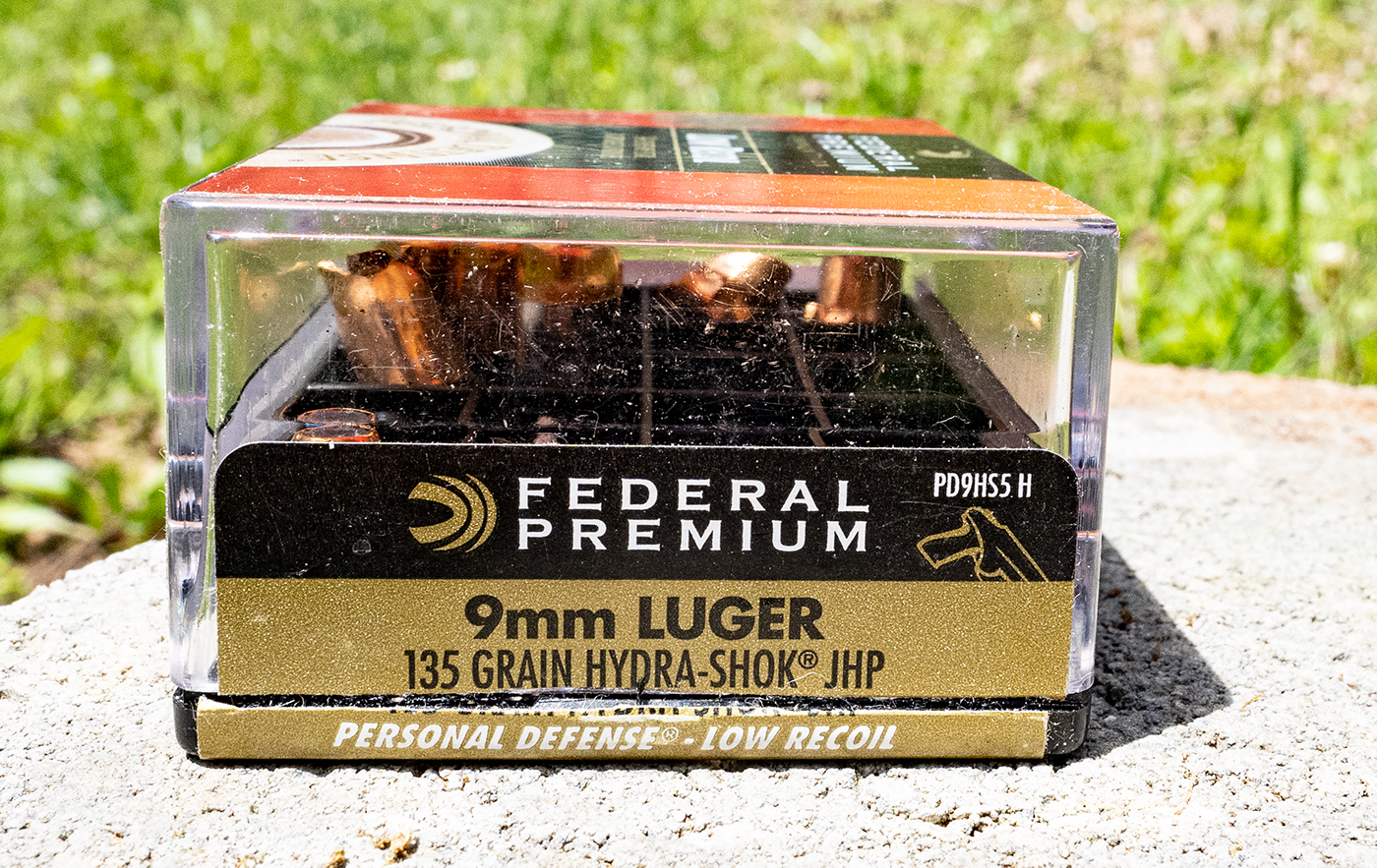 Replicas of the Luger pistol are still in production today. However, the market is mostly for those with nostalgic notions of firearms history. The pistol saw its heydey, and firearms technology moved beyond what the pistol could offer.

However, the cartridge Luger designed to improve his pistol design endured.

As Germany pushed for a larger caliber in their military sidearm, Luger took the 7.65x21mm Parabellum case and removed the bottleneck shape. The result was a tapered, rimless case that he topped with a .380 caliber projectile. Thus was born the 9x19mm Parabellum, also known as 9mm Luger.

Luger presented his new cartridge to the British Small Arms Committee and the U.S. Army in 1902. The Imperial German Navy selected the cartridge in 1904. In 1908, the German Army officially adopted 9×19 Parabellum for their service pistols.

Although Luger’s pistol gradually waned in popularity after the First World War, the 9x19mm Parabellum cartridge’s favor swelled. The cartridge’s flat trajectory and mild recoil have made the 9mm Luger the most popular pistol cartridge in the world today.

Law enforcement around the globe began adopting the cartridge immediately following World War II. That was mostly due to the availability of compact semi-automatic pistols with relatively generous magazine capacities chambered for the round. Previously, law enforcement had relied mostly on revolvers chambered in .38 Special.

In 1985, the Beretta M9 became the official duty sidearm of the US Army, and with it the 9mm Luger cartridge.

By the mid-1980s, 9mm Luger reached icon status in pop culture. It was regularly featured in Hollywood productions and gangster rap.

Today, with the Sig Sauer M17 used by the US military, the Glock 17 in widespread use by law enforcement, and the Glock 19 as the most popular sidearm in civilian use, the world goes through a ton of 9mm cartridges.

Luger’s brainchild is the best-selling cartridge in use today. It makes up more than 21% of ammunition sales in the United States.

Every major ammunition manufacturer in the world produces this versatile round, often in several specialized variations. 9mm Luger is affordable and readily available for target shooting, self-defense, duty use, and competition. And as ammunition technology has advanced and terminal ballistics have improved, the 9mm Luger has closed the performance gap, giving larger caliber designs like .45 ACP a major run for the money.

The 9mm Luger is a fabulous do-it-all cartridge. With advanced materials and cutting-edge ammo designs, the 9mm is perfect for everything from backyard plinking to all-out warfare. And it’s all thanks to a humble ex-accountant who was a good shot and had an interest in weapon design. Luger’s relatively small invention left a huge and lasting footprint on the world of firearms and ammunition.