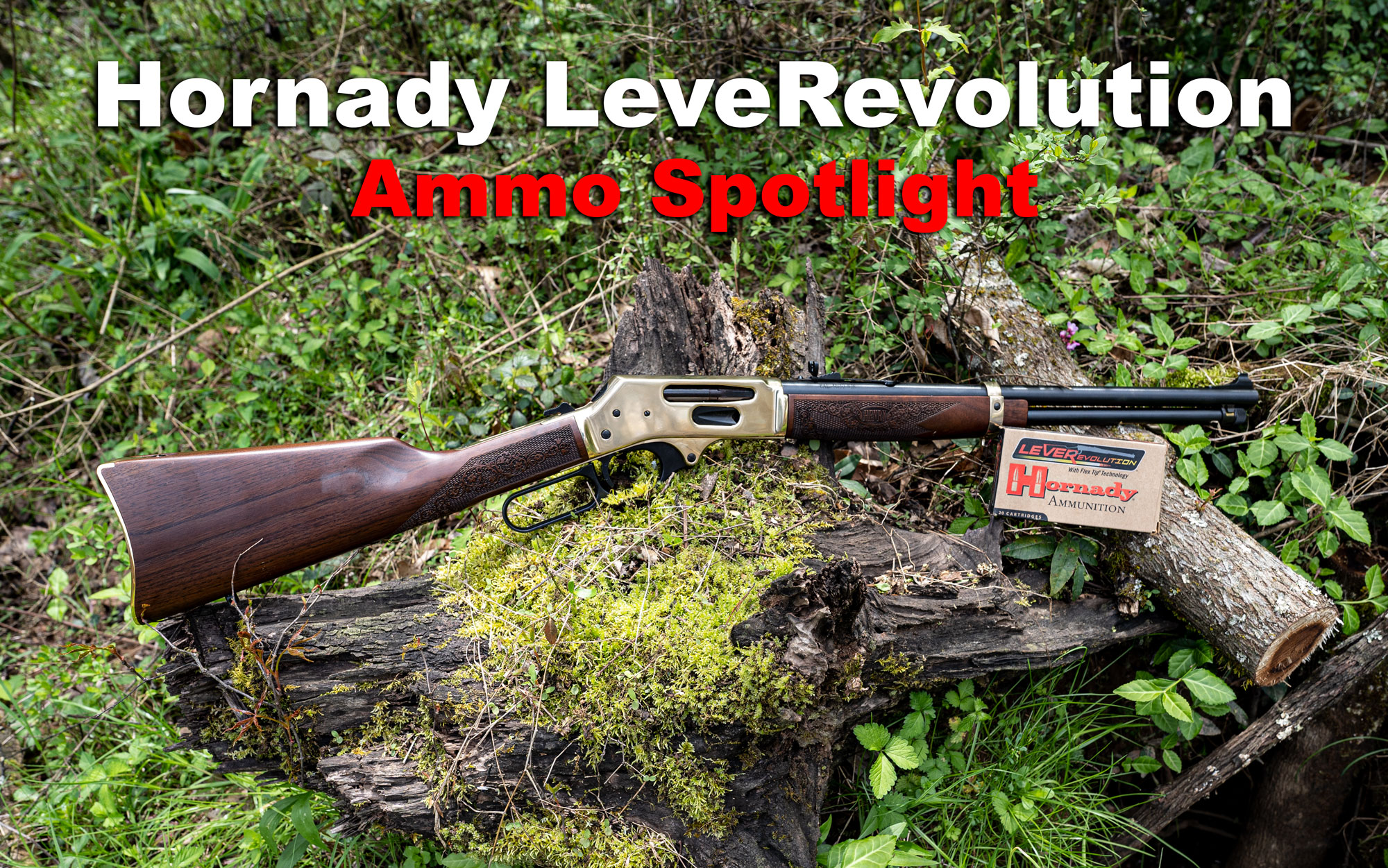 If you shoot or hunt with a long gun, odds are good you’ve seen Hornady LeveRevolution ammo on the shelves. What is so special about these rounds and how does Hornady make them ideal for lever action rifles? Let’s explore and find out!

Lever action rifles hold a special place in the hearts of American shooters, especially those with a preference towards history and nostalgia. Associated in the national consciousness with the frontier and the American West, these rifles have long been trusted for hunting and protection.

In the modern firearms industry, with “sporting rifles” and semiautomatic weapons, it’s still enjoyable to use classic designs like a lever action. Loading up these rounds for hunting makes the experience even better.

Helping to reignite people’s passion for lever action rifles, Hornady’s LEVERevolution (pronounced “lever evolution”) delivers modern velocities and trajectories to these timeless rifles. Read on to learn all about this unique line of ammo or click the banner to below if you’re interested in buying Hornady LeveRevolution.

The Problem with Tubular Magazines 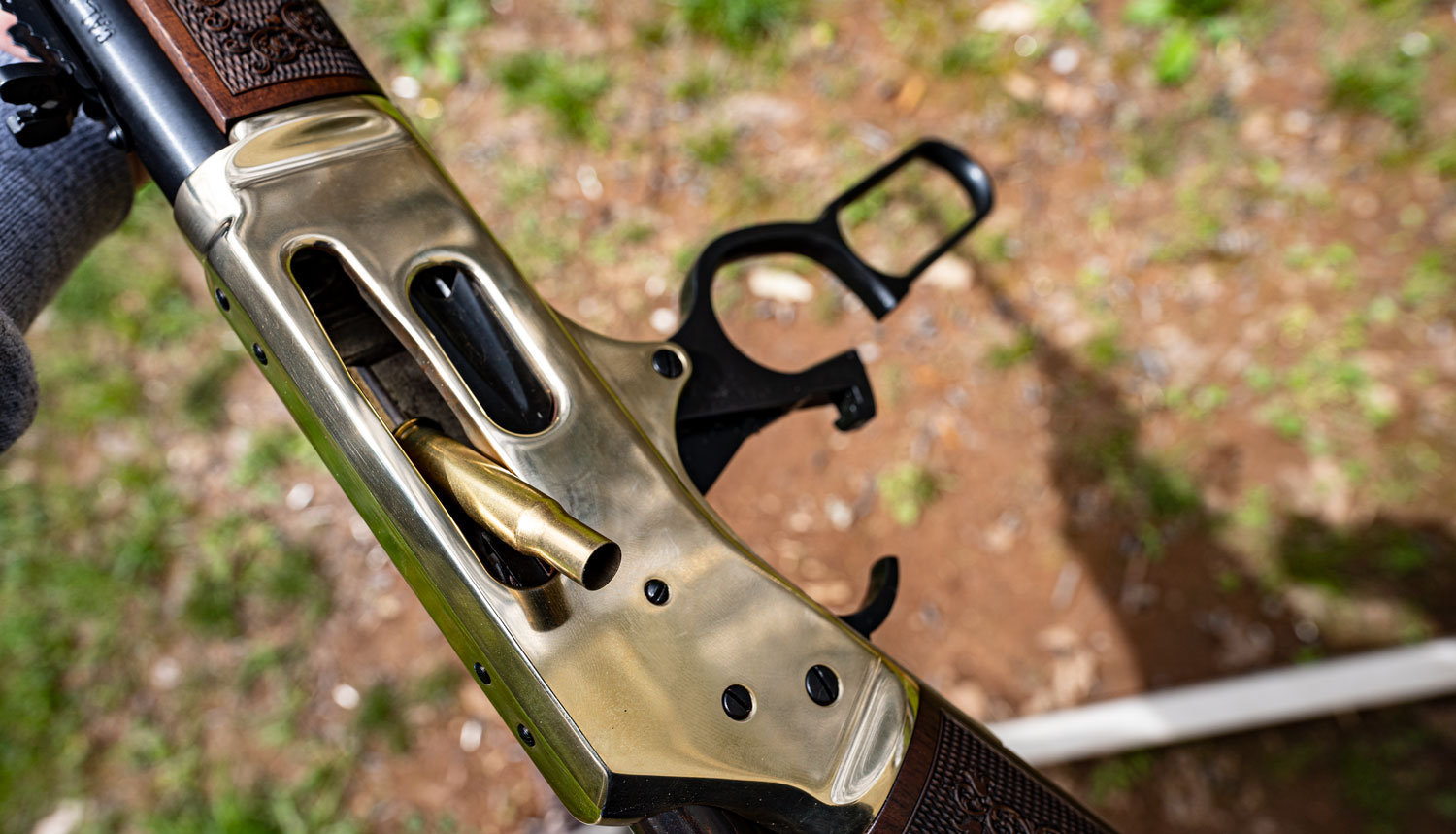 Lever action rifles have a unique flaw that sets them back from other designs, especially semiautomatic and bolt action rifles. Lever action firearms have a tubular magazine, with the cartridges stored in a line down the tube running alongside the barrel.

With cartridges stacked front to back, you have the bullet tip of one cartridge touching the primer of another. That bullet to primer relationship creates the potential for a hard, narrow tip to ignite the cartridge in front. This is why lever action rifles use round or flat-tipped ammunition. But rounded and flat projectiles have more aerodynamic drag, which means trajectories suffer and the bullet is more likely to drop.

To solve this issue, LEVERevolution rounds use a special bullet specifically designed for lever action rifles. 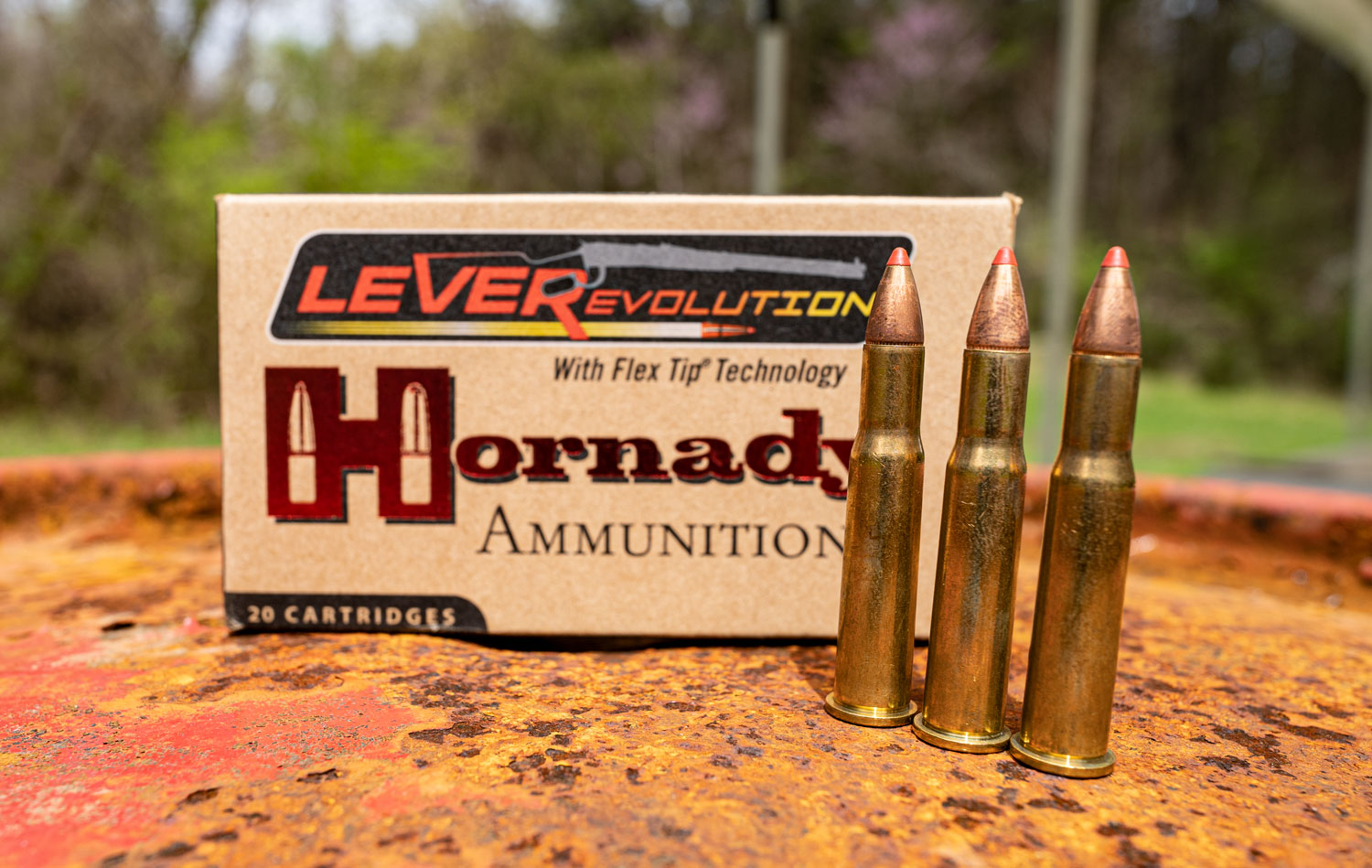 While there are other advantages of the LEVERevolution lineup, the key feature is the bullet. Specifically, the bullet tip. Hornady, a brand known for numerous innovations in the firearms industry, is using their patented Flex Tip bullets. This bullet is a soft tip projectile that has, essentially, the aerodynamic qualities of a pointed tip. With a soft polymer tip, the bullet can maintain better aerodynamics when fired, yet it maintains safety inside the tubular magazine. With this bullet design, users essentially get the aerodynamics of a pointed tip with the safety of a rounded or flat-top bullet.

Hornady is using two different bullet products that both use the Flex Tip technology: the FTX and the MonoFlex bullets.

The FTX bullets are designed for lever action rifles, providing accuracy and power to these popular firearms. The bullets are made with a flexible tip (Hornady’s FlexTip technology), as well as a heavy jacket that encompasses the body of the bullet and its lead core. Near the middle of the bullet is an interlocking ring. That ring ensures superior weight retention and increases the consistency of expansion.

Unlike the FTX bullets, MonoFlex bullets do not have a lead core, and are instead made with a single piece of copper alloy. This copper won’t separate, so it maintains power and penetration when striking a target. According to Hornady, MonoFlex bullets have a 95% weight retention. 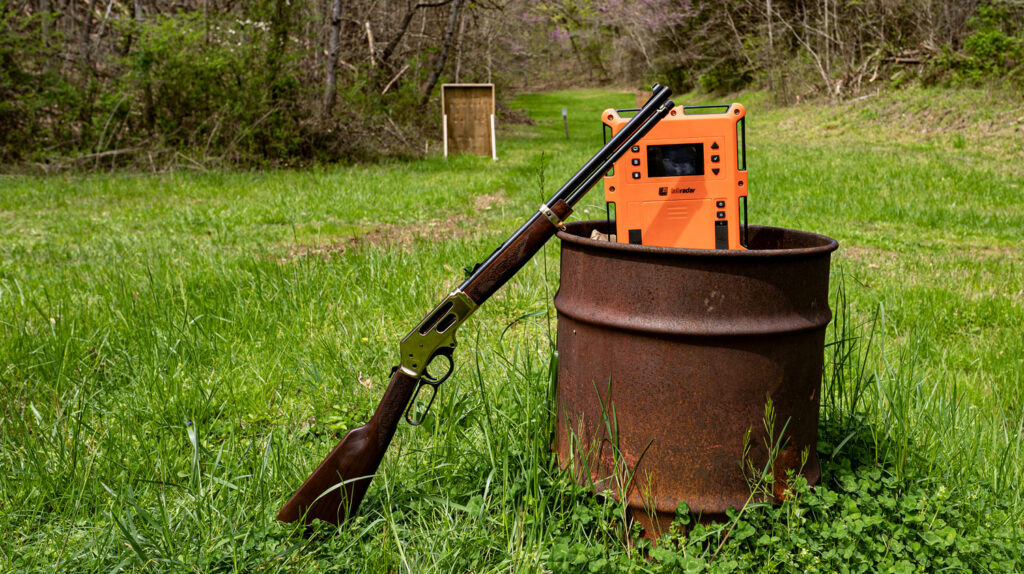 In addition to the bullet design, Hornady has also included an advanced propellant that provides superior muzzle velocity while maintaining conventional internal pressures. This contributes to both superior trajectories as well as better terminal ballistics. Basically, thanks to state-of-the-art gunpowder, LEVERevolution rounds shoot straight and hit with maximum effect.

What Makes Them Ideal for Lever Action Rifles?

To fully understand why LEVERevolution rounds are so effective, you should understand the concept of ballistic coefficient. Essentially, ballistic coefficient is a mathematical measurement of a projectile’s ability to resist air drag. It takes into account a variety of factors, including weight, length, and width of the object.

This formula can, in theory, be applied to all objects. We typically only use the formula though for items that are launched through the air. For example, an arrow will have better ballistic coefficient than a balled-up piece of paper.

For shooters, the higher the ballistic coefficient, the better the bullet will resist air drag. This means bullets with better drag will drop less over a specific distance, assuming all other factors (such as velocity) are the same.

We won’t dive into the specific coefficient statistics of each LEVERevolution round; just know that these cartridges pack bullets that have a higher ballistic coefficient than comparable cartridges.

To help you see the difference between LEVERevolution and typical lever action ammunition, let’s look at two comparable products from Hornady.

While slightly different in bullet size, Hornady has the .30-30 Winchester 140-grain MonoFlex round and the 150-grain RN Interlock, which has a rounded nose. The MonoFlex has a ballistic coefficient of .277, while the Interlock has a B.C. of .186. The result? When zeroed to 200 yards, the MonoFlex drops 12.4 inches as 300 yards. Under the same conditions, the Interlock bullet drops almost 30 inches.

What Cartridges are Available? 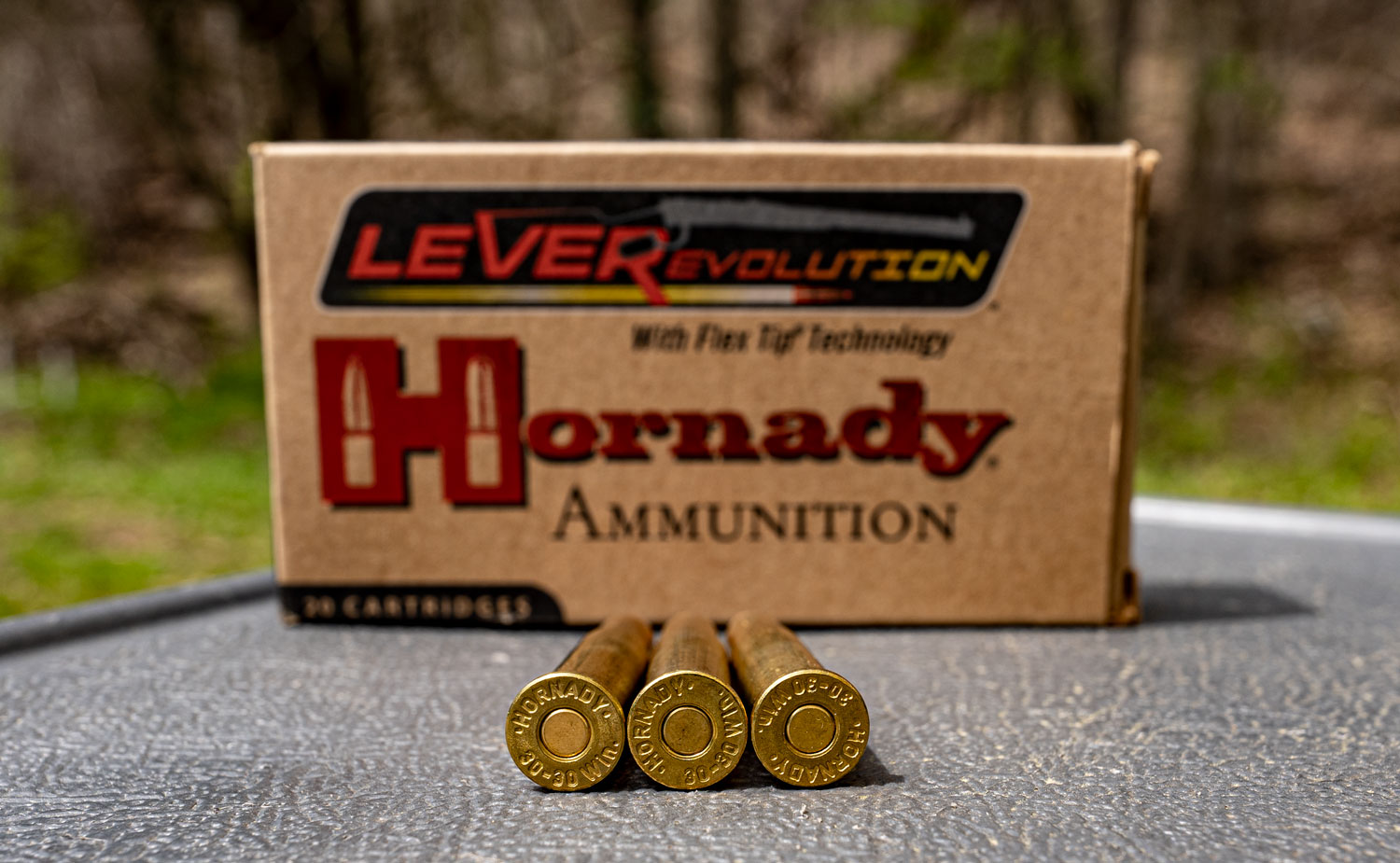 Hornady is providing a variety of products in their LEVERevolution lineup, including both rifle rounds and cartridges that a commonly associated with handguns.

Hornady’s 30-30 LeveRevolution is the best seller in the line-up that we carry here at AmmunitionToGo.com. You can pick it up by the box of 20 rounds or the case of 200 rounds.

If you haven’t used it before – check out the reviews customers have left at AmmoToGo.com about these rounds.

I’ve been hunting a long time with my lever action 30-30 and this ammo by far is the best I’ve ever used!
Gives great knock down to a gun that doesn’t have a lot of energy. – ATG customer

Hornady’s 45-70 loads in the LeveRevolution line are also very popular. You can get these rounds in the same 20 and 200 round configurations as the 30-30 Win.