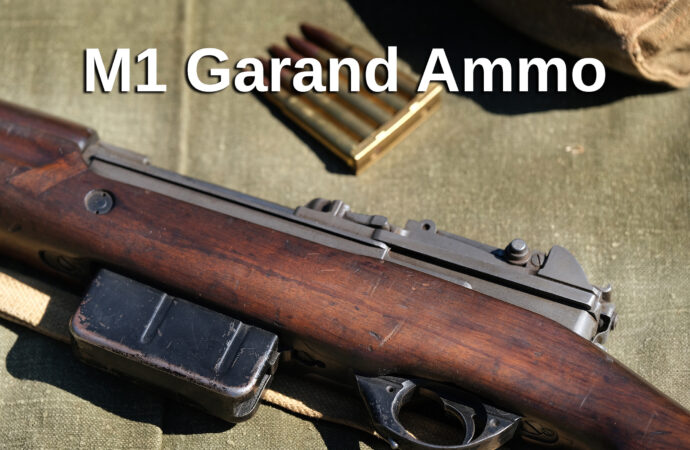 A look at M1 Garand ammo - what makes it different from "normal" 30-06 Springfield rounds and what your best bets are for specific ammo options.

There are a lot of firearms we can call “historic.” The M1911, the Thompson sub-machine gun, the Colt single-action “Peacemaker,” the Henry repeating rifle; all impacted the way people hunt, defend themselves, or fight in wars.

The M1 Garand is certainly one of those weapons. Famously called “the greatest battle implement ever devised” by General Patton, the M1 Garand was the first standard-issue autoloading rifle used by the United States military.

Carried in conflicts that include the second World War and the Korean War, the M1 Garand remains a popular rifle for sport shooters, hunters, and nostalgic-minded firearm enthusiasts.

The firearm loads .30-06 Springfield ammo. But there is a problem: only specific ammunition, made precisely for an M1 Garand, should be used in the rifle. 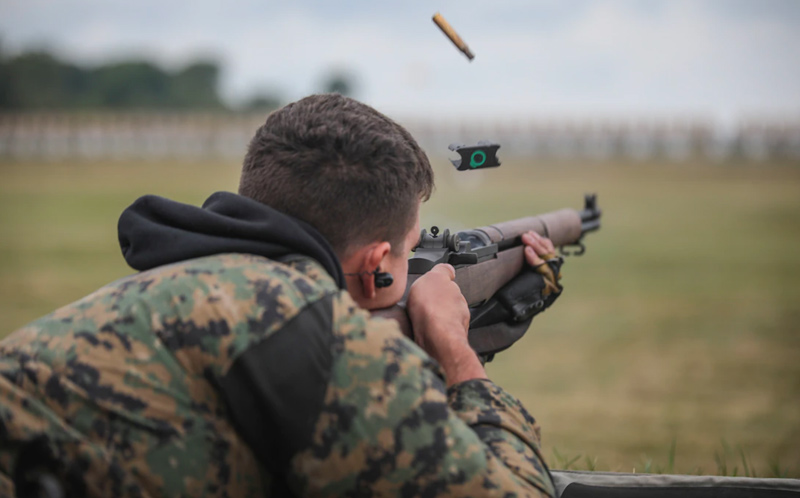 The issues stems from pressure. We won’t go too deeply into the stats and figures, but essentially the M1 Garand, which debuted in the mid-1930s, cannot handle the higher internal pressures created by modern ammunition.

In particular, commercial hunting rounds, which are intended for high speeds, straight trajectories, and powerful impacts, will overwhelm the internal components of an M1 Garand. The port pressures and gas volumes are just too high; when fired they cause violent stress and can damage the firearm’s rod, bolt, and receiver.

Even if the bullet is the same size as M1 Garand ammo (such as the Federal, Hornady, and Seller & Bellot products we’ll discuss below), the internal pressure can be higher, resulting in failure. (In other words, it’s not the bullet weight that matters, it’s how manufacturers load the propellant.)

So if you own an M1 Garand, you can’t grab the first box of .30-06 ammo within reach. You have to be selective, and you can’t load high-powered hunting cartridges. You have to find ammo specifically marked for the rifle.

Fortunately, there are options available for owners of this historic weapon.

If you shop for ammo from military surplus outlets, you may find M2 Ball ammunition, which is .30-06 Springfield with a 150-grain bullet. This is the ammo that most owners rely on, but the supply of this military surplus product is steadily declining. For this reason, shooters may turn to products created by a few of the biggest names in the ammo industry. Surplus can be a hit-or-miss option for M1 Garand ammo though. For instance, we’ve had Greek surplus, Turkish surplus, and others come in over the past several years. Once they sell out, re-supply is often difficult. 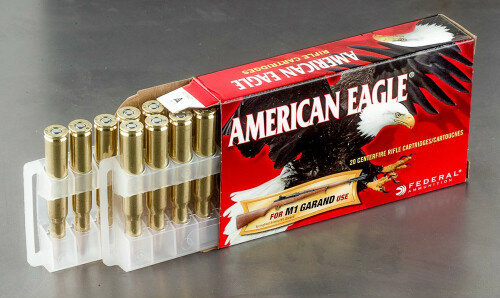 With a 150-grain full-metal jacket bullet, this 30-06 ammo from Federal Premium is specifically made for the M1 Garand. The cartridge, essentially, is a dialed-down version of their standard .30-06 American Eagle product, which also carries a 150-grain bullet.

You can see the difference in their statistics:

To be fair, these are external statistics, not internal pressures. But they demonstrate how the M1 Garand ammo is slightly lower in power. 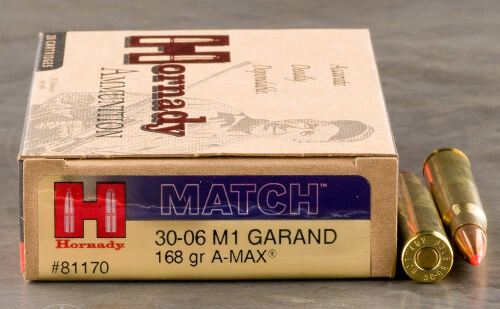 Hornady, another of America’s major ammunition manufacturers, makes a 168-grain ammunition for the M1 Garand. Unlike most products for the rifle, this one does not use a FMJ round. Instead, manufacturers load it with a ballistic-tip projectile. According to Hornady’s information, the cartridge is “built to replicate the original military performance specifications unique to many vintage rifles.” Hornady developed it specifically for match shooters.

Again, we can see how the M1 Garand ammo is slightly lower in power than other products:

Again, we see the M1 Garand product is just a bit weaker than Hornady’s other options.

The third major ammo manufacturer that makes ammo for the M1 Garand is Sellier & Bellot. They offer a 150-grain FMJ ammo that is marketed as “tactical ammunition.” It’s an ideal product for training and target shooting. Like the others, it also has lowered internal pressure, allowing it to perform safely in the M1 Garand. 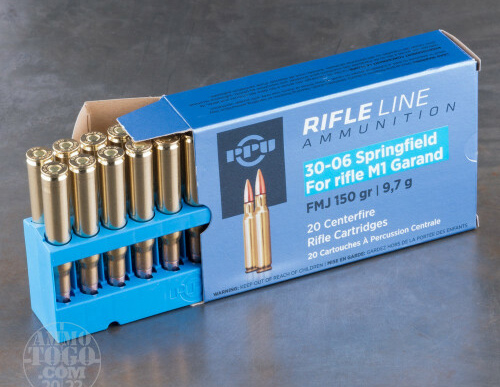 Prvi’s 150 grain M1 Garand ammo features the same bullet weight the American military fired in World War II. Made in Serbia, these rounds have quickly grown acceptance among American civilian shooters and their specially-made for the Garand load is a good seller with solid reviews at AmmoToGo.com. Prvi Partizan also makes this in a bulk 500 round ammo can option that can save you a few cents per round when in-stock.

Hunting Ammo for the M1 Garand: Make Your Own

You may have noticed a trend with the above ammunition: they are all for target shooting, range training, and competition; there are no commercially-available hunting rounds made for the M1 Garand. (Seems like an open opportunity for ammo manufacturers!) It’s all FMJ bullets and training rounds, no expanding rounds like hollow points and soft noses.

If you want to hunt with the M1 Garand, it appears you have to do a little more work.

An option, although one that requires far more effort than purchasing a box of rounds, is reloading your own ammo. If you are an experienced hand loader, you can create your own rounds for use in the rifle. An expanding tip, such as a hollow point or soft nose, loaded with the proper specs, should serve your needs.

Get an Adjustable Gas Plug

Instead of adjusting the ammunition, it’s entirely possible to adjust the rifle with an adjustable gas plug. These products, which replace the standard plug that sits just underneath the barrel, allow for the release of internal gasses, thereby reducing pressure inside the chamber. (There are several options available, but it’s recommended that you use a specifically-designed tool for the replacement.)

These products are adjustable, so you can set the pressure to your exact needs. Basically, you want to start loose, allowing for the most gas to be released, resulting in the lowest pressure. However, when pressure is too low, the rifle won’t cycle, as the cycling process is powered by the pressure. Make one shot at a time, steadily increasing pressure until the rifle ejects the spent cartridge and loads a fresh round. (Do not go any tighter!) This process must be repeated with different ammo products, as each one will have a different internal pressures.

With this adjustment, you can safely use hunting ammunition with expanding rounds in your M1 Garand.