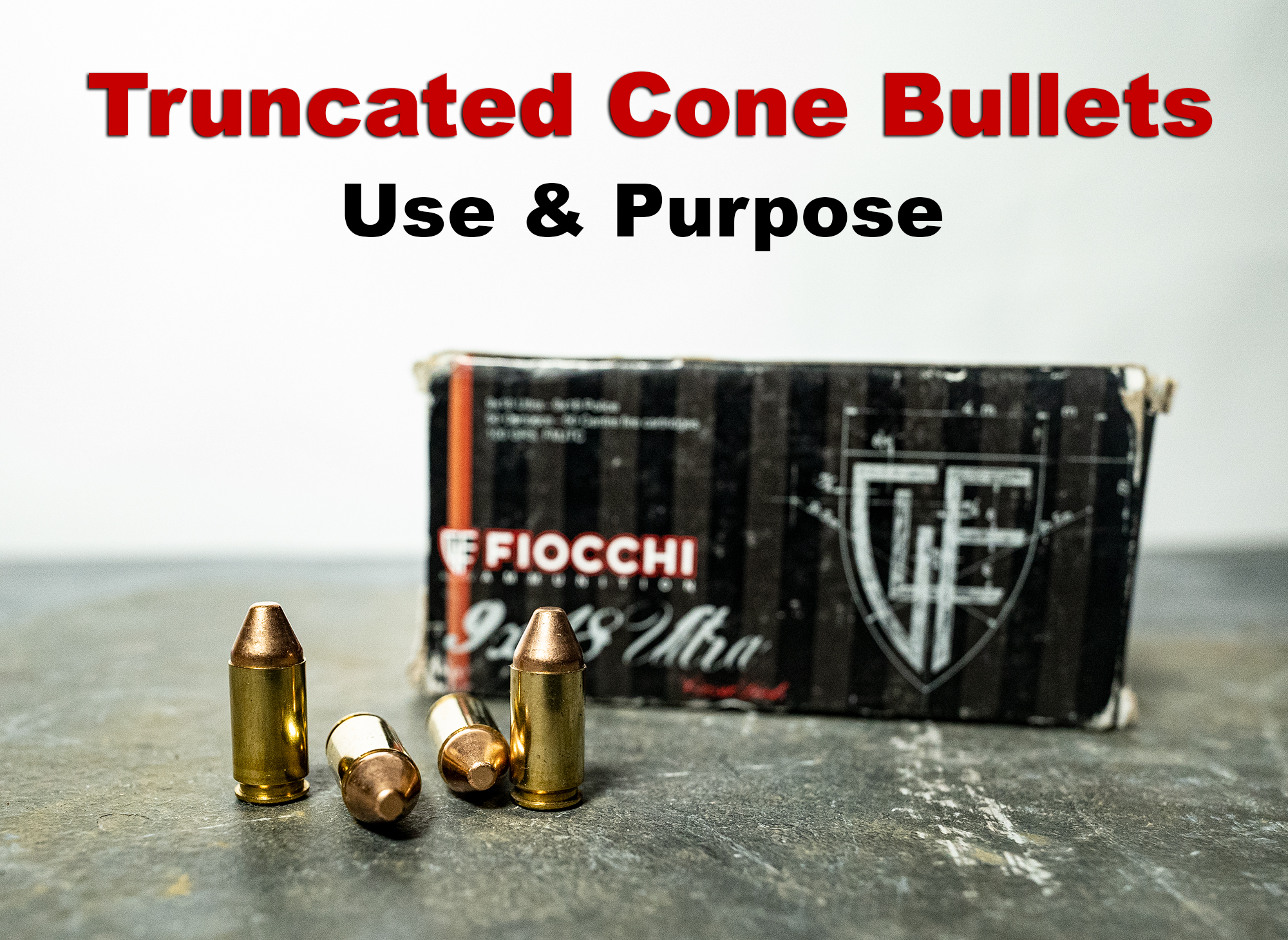 All about truncated cone bullets – why you might use them and how they are different from more common full metal jacket bullets.

As a gun owner, you have a variety of ammunition options available. There are numerous bullet types, and each one has their own unique purpose. Some, ballistics experts create for a specific purpose. Others engineers design to be a versatile round, capable of performing in many different activities.

One type of bullet that is less common, less well known, but nonetheless highly effective in certain situations, is the “truncated cone.” Often available as a full-metal jacket round, a truncated cone bullet is effective for target shooting and plinking but it can also be useful for hunting and pest control.

If you own a handgun or rifle, you should understand the uses for these interesting and underrated bullets.

Your Guide to Truncated Cone Bullets

What are Truncated Cone Bullets?

“Truncated,” simply means something that is cut short. In more detailed terms, it means having the apex replaced by a level plane.

If all of that doesn’t quite make perfect sense, that’s okay. Just know that truncated cone bullets are simply cone-shaped rounds that don’t have a point at the end but instead have a flat plane, one that runs parallel to the base of the bullet. Imagine a traffic cone that doesn’t go to the top, but is instead cut off and has a flat plane at the top. This, essentially, is the shape of a truncated cone bullet.

Full-metal jacket bullets are round and completely wrapped in copper. They have a lead core with a copper jacket that covers either the entire bullet or everything except the base. Full-metal jacket rounds are available in truncated cone products, which are often referred to as “FMJ-TC” rounds.

Basically, a FMJ-TC round is a bullet with a copper jacket and a cone shape with the top cut off to a flat plane.

While each person will have a different experience, most will find that these rounds provide a few different benefits.

Most important, they are usually good for feeding from a magazine into the chamber. They usually have a smooth feed that works well in most semiautomatic pistols and rifles. While jams are certainly possible, they are less common with FMJ-TC rounds because the shape creates less potential for cartridges getting stuck on corners and edges.

These rounds offer an interesting combination of penetration and blunt force. The penetration you’ll witness depends on the size of the plane, the weight of the bullet, speed, distance, and other factors, but the smaller the diameter of the plane, the more penetration it will deliver. On the other hand, if the plane, also known as the “meplat,” is larger, there will be more force or “shock” at the point of impact. Because of the flat plane, FMJ-TC rounds can deliver impressive results when shooting targets.

The flat nose also helps when shooting paper targets. Because of the flat surface at the front of the bullet, these rounds create clear, distinguishable holes in paper targets. Basically, it punches a clean hole instead of ripping through the target, making your hit points more visible. This visibility makes them a popular choice for anyone who enjoys target shooting, especially from a distance.

Some also report that these rounds are more accurate than other types of ammunition, but there is little hard evidence to prove this claim.

What Do They Offer Over Traditional FMJ Rounds?

The main benefit that these bullets offer over traditional full-metal-jacket rounds is clear holes when shooting paper or cardboard targets. As we have discussed, the flat nose at the front of the cone shape allows the bullets to punch clean holes in paper and other materials, leaving a distinct hole that is easily visible, even from a distance.

A typical FMJ bullet has a rounded nose, so it doesn’t punch through the paper, but usually rips through the material, leaving a tear in the target. This makes it harder to see, which is why many shooters prefer FMJ-TC rounds. With these rounds, you get all the benefits of a FMJ (smooth feeding, clean shooting, less fouling), as well as a clean, visible hole at the target.

Most people will use these bullet specifically for target shooting. There are a few factors for why these bullets are popular among target shooters. Most notably, when shooting at paper targets you can leave clear, identifiable holes in paper and other target materials, so you can easily keep score or track your shooting while you go. They are also popular for target shooting because of the enhanced feeding. With fewer chances for a jam, they are useful when you shoot dozens and hundreds of rounds on a single trip to the range.

Some will use small-caliber FMJ-TC rounds for varmint control and small-game hunting. As we described, the rounds deliver a combination of penetration and blunt force, so they are effective at harvesting small game.

If you’ve decided to try FMJ-TC rounds, you may, in all honest, have trouble finding the cartridges you need. Frankly, a lot of manufacturers don’t make them. That’s in direct contrast to FMJ rounds, which basically every factory makes.

In the FMJ-TC space, the Italian manufacturer Fiocchi, which has facilities in the United States, is the big player. They offer a variety of FMJ-TC rounds rounds for different pistol cartridges, including 10mm Auto, .357 Magnum, and 9mm Luger. PMC also manufacturers some FMJ-TC rounds, like this 10mm ammo.

These cartridges are from Fiocchi’s Specialty, Ultra line, which were marketed as a police product even though they were made available to the public. These are, admittedly, rare and hard-to-find cartridges.

There are also some boxes of FMJ-TC rounds on the market from Remington, most notably a 10mm Auto product that carries a 180-grain truncated cone bullet.