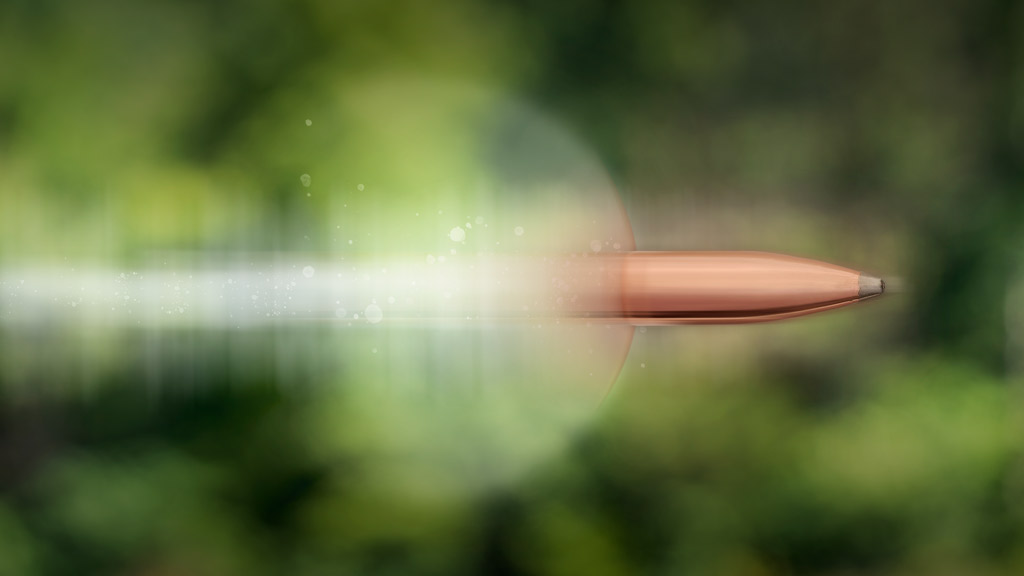 Ballistic coefficient is a measurement of a bullet’s ability to travel through the air. It might not matter if you’re shooting at 50 yards, shooting pistols, or firing birdshot but it’s crucial if you want to harvest game with a long-range rifle.

If you understand ballistic coefficient, you’ll perform better at the range and in the field.

Simply put, ballistic coefficient is a numerical measurement of a bullet’s ability to cut through the air.

If a bullet has a high BC, then it is better able to slice through the atmosphere without being slowed by air particles. Bullets with higher ballistic coefficients resist drag better than bullet with low BC. This has profound implications on the bullet’s overall performance, including accuracy and terminal ballistics.

Bullets that are too heavy can drop sharply because of an increased rate of drag. Bullets that are too light will not have the momentum or energy to keep cutting through the air efficiently. Therefore, a properly weighted bullet is one of the key factors for ideal ballistic coefficient.

The other factor that impacts a bullet’s ballistic coefficient is shape. Regardless of weight, having the ideal shape will impact how the bullet flies through the air.

Think of paper airplanes; using the exact same pieces of paper, you can make two planes that weigh the same but perform very differently. This is the same principle that impacts a bullet’s ballistic coefficient, which is generally improved by elongating the nose and narrowing the rear into a boat tail.

An easier way to think of it, however, is simply whether the bullet is long and thin, short and fat, or somewhere in the middle. (There’s a mathematical equation for measuring sectional density, but we’ll spare you the details.)

How to Actually Measure Ballistic Coefficient

Basically, they can’t just look at the weight and shape and sectional density, they have to use the bullets in precise testing.

For modern bullets, the range of ballistic coefficient is about .12 (which is at the low end) to 1.0, which has extremely high air-drag resistance.

Note: Ballistic Coefficient is to Bullets, Not the Cartridge or Other Factors

There is an important point about ballistic coefficient that must be addressed to fully understand the measurement: BC is for the bullet only. It is a measurement that has nothing to do with the cartridge. Propellant load, the rifle, or any other component other than the projectile itself won’t have an impact on the coefficient.

What Does a High Ballistic Coefficient Mean?

All of this results in a measurement that helps you determine how well a bullet slices through the air, but what does it really mean for your performance? Basically, it’s all related to down-range velocity. As you probably know, velocity has a profound impact on how your bullet performs overall.

First of all, having a better down-range velocity means the bullet will drop less. You’ll still have to compensate for drop (you can’t escape gravity), but when firing a bullet with high ballistic coefficient, you can count on less drop from the barrel to the target. Essentially, you’ll get a straighter trajectory if you have a higher ballistic coefficient.

Higher velocities down range also impact terminal ballistics. If a bullet can strike a target at a faster speed, it will penetrate deeper, which is crucial when hunting large game, especially in the western portion of the United States, which calls for long shots over open country. With more velocity, the momentum will also drive greater expansion, assuming you are using an expanding bullet. This expansion is also critical to big-game hunters.

High ballistic coefficient also enhances the bullet’s resistance to crosswind. This can help increase your hit percentage and make you a more effective shooter, whether you are aiming for game animals or competition targets.

Who Should be Concerned with Ballistic Coefficient?

The principle can apply to really any rifle bullet but it’s mostly applicable to long distance shooters. Riflemen who shoot at distances of 200 yards or greater are the ones that really need to understand ballistic coefficient. Air drag is certainly a factor under 200 yards, but it doesn’t have the noticeable impact on a bullet that you would have at 300, 500, or even 1,000 yards.

Ballistic coefficient will also not be a concern for anyone firing handguns or shotguns. It is a rifle ammo specific designation only.

That said, if you fire a rifle at a significant distance, whether that is for hunting or target competitions, having a basic understanding of these principles will make you a more successful shooter.

Basically, G1 is no longer representative of modern bullets. It uses a system that changes the bullet’s rating through the course of flight, meaning the BC could change. As a rule of thumb, if a bullet doesn’t have a stabilizing boat-tail, you might see the G1 system used.

The G7 is a more consistent system that stays the same over the life of the flight. This makes it more reliable and steady for shooters. If nothing else, just remember to look at G7 measurements whenever possible. Berger Bullets has a lot more info about the G1 vs. G7 difference if you’d like to get into more details on this topic.

Now that you know the importance of ballistic coefficient, you can choose ammo and bullets that deliver the best drag resistance. Of course, you still need hours of practice to ensure accurate and reliable shot placement.