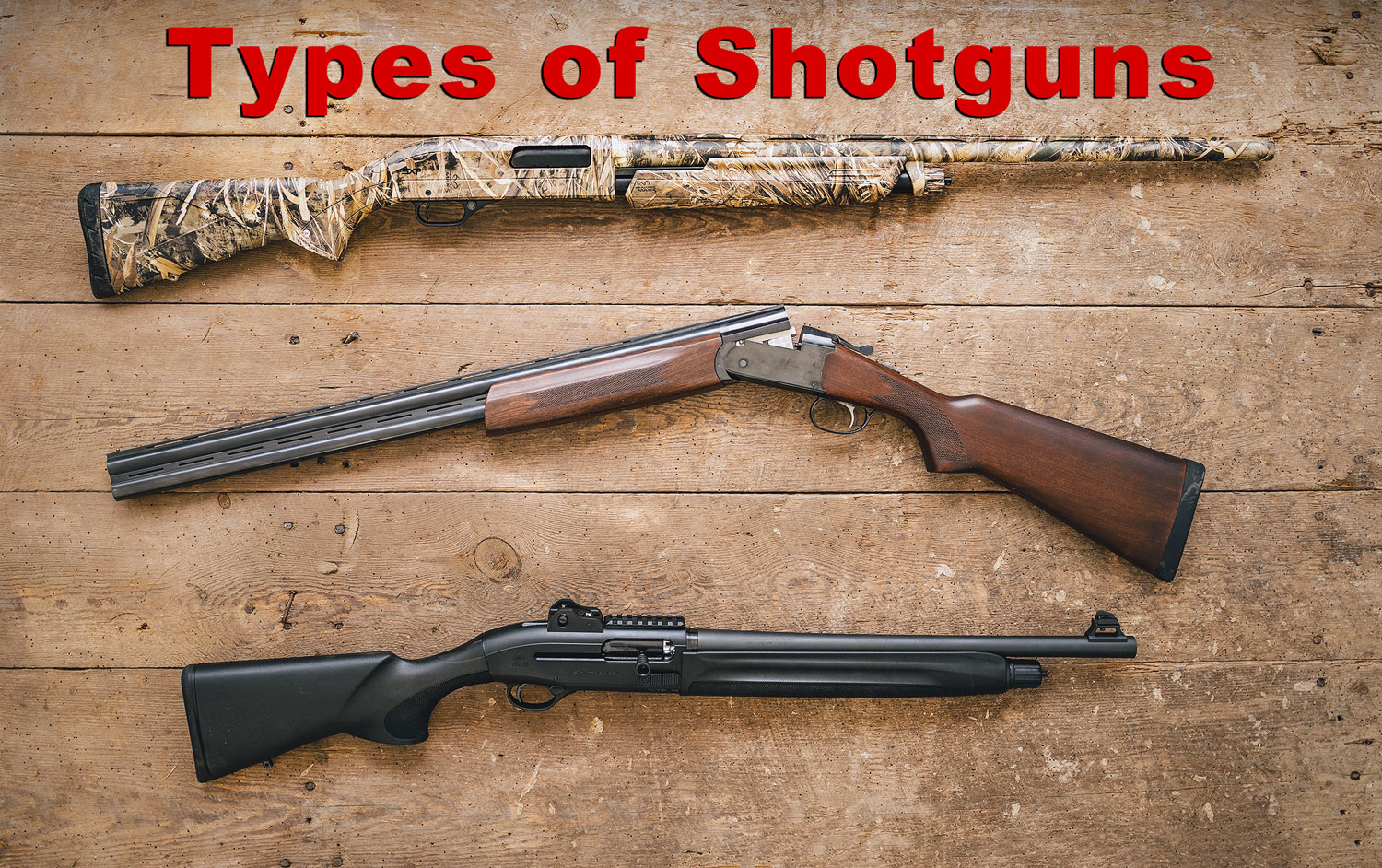 A look at the most common types of shotguns available and why you might select one over the others for your needs.

Shotguns are often thought of as big, brawny hunting weapons. However, the shotgun may be the most versatile tool in a shooter’s arsenal. Many firearms experts claim that if they were limited to just one gun, it would be a shotgun. But you do have several choices when it comes to the different types of shotguns available.

Historically known as a scattergun, shotguns are most effective as short range weapons.

A favorite choice of hunters, a shotgun with appropriate ammunition can be used to hunt everything from small upland birds to large whitetail deer. These firearms are also solid home defense weapons. Because they can accommodate a variety of tactical modifications, they are also commonly used by law enforcement and the military.

Finally, a shotgun is the standard weapon for shooting clay targets, whether with your buddies on the back forty or in regulated trap, skeet, and sporting clay competition.

If you are new to shooting, the world of shotguns can be confusing and pretty intimidating. There is almost an infinite number of weapon choices. The world of shotguns even has its own language that includes exotic words like “gauge,” “buckshot,” and “choke.”

In the interest of education, we’ve compiled this simple, straightforward guide to shotgun basics to help clear things up.

What is a Shotgun? 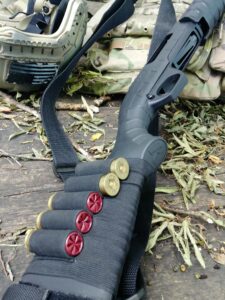 By definition, a shotgun is a long gun capable of firing multiple metal pellets simultaneously. Unlike rifles that have spiraled grooves machined into the inside of the barrel, the standard shotgun has a smooth bore. This smoothbore design allows these weapons to fire multiple pellets of varying sizes.

Although shotguns are not as accurate as rifles, the number of pellets fired with each shot increases the chances of hitting the intended target, making them very effective for fast-moving (like ducks) and close range targets.

Some modern shotgun designs feature rifled barrels. These “slug guns” provide increased range and accuracy, but can only fire special saboted slugs. (Don’t worry. We’ll talk about this in a minute.)

Shotguns come in a variety of gauges. Many shooters refer to their shotguns by their gauge. For example, Grandpa’s beloved “12 gauge” was a shotgun with a specific bore diameter. While rifle bores are measured in “calibers,” shotguns are measured in “gauges.”

Gauge is determined by the weight, in fractions of a pound, of a solid lead sphere that will fit into the bore of the shotgun. If this sounds confusing, it’s because it kind of is. To put it more simply, the size of a solid lead ball that would fit down a standard 12 gauge is 1/12 of a pound. In other words, it would take 12 balls of the same size to make a full pound.

The most common gauges available to modern shooters are the 12 gauge, 20 gauge, and the .410 bore (which is actually like a 67 1/2 gauge, but I told you the world of shotguns could be confusing). The smaller the number, the larger the diameter of the barrel.

Most defensive shotguns are 12 gauges. This is also a popular option for hunters who can handle the recoil. A 20 gauge delivers a little less power, but is still an effective weapon for home defense and most hunting scenarios. These smaller weapons tend to be lighter and produce less felt recoil, making them a favorite for youth, women, and smaller framed shooters. (Not sure if need a 12 or a 20 gauge? This article will help.)

A .410 delivers even less power and recoil and can be a fun-shooting option for targets, small game, and pest control. However, because .410 shells are significantly smaller, there are fewer pellets in each shot. Some shooters find them frustrating when trying to hunt birds and small game.

Types of Shotguns by Action Type

Most of the time, when we talk about the different types of shotguns, we separate them by their action.

The action of a firearm is the operational mechanism that loads, fires, and ejects a cartridge. There are three main types of shotgun actions. 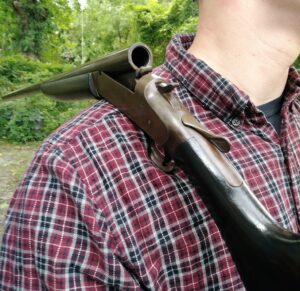 Break action shotguns have been around for a long time. If you’ve ever seen old black-and-white photos of stagecoach drivers or cowboys, they were probably carrying a single or double barrel break action shotgun.

The simplest action design, break action shotguns have a hinge at the breech (back end of the barrel) that opens so a cartridge can be inserted. The hinge is closed to fire the shot. This hinge must be reopened to extract the spent shell and load a new one.

Although these actions are simple and reliable, the number of shots before reloading is limited to one or two (depending on the weapon). Reloading is a process and can be difficult to complete under duress. Because of this, many experts consider break action shotguns impractical for home defense. However, they remain a favorite of hunters who love the traditional aspect of a double barrel shotgun. Some seasoned hunters even claim the lack of follow-up shots force them to be better shooters.

Unlike break action shotguns, the pump action (also known as a slide action) can hold multiple rounds. Shells are loaded manually by “pumping” or sliding the action back and forth. Once a shot is fired, the shooter pumps the action again to extract the spent shell and chamber a fresh round.

Racking a shell (chambering a shell by pumping the action), is that telltale shotgun sound that strikes the fear of God into a home intruder. There’s an old expression out there that “just the sound of chambering a round in a pump action shotgun is enough to eliminate a potential threat, making burglars hightail it to safety.” (For the record, we don’t suggest you merely learn how to load a shotgun and rely on that for self-defense. If you are relying upon a shotgun, train with it and learn how to fire it in a crisis situation.)

As long as the shooter doesn’t short stroke (fail to push the pump completely back to its original position preventing the next round from properly loading in the chamber), pump shotguns are incredibly reliable. Because of their simplicity and dependability, pump shotguns are popular choices for home defense, hunting, and law enforcement and tactical applications.

The only disadvantage of a pump action shotgun is that the shooter can only fire as quickly as they can function the pump. For inexperienced shooters, this can make follow up shots slower than other types of shotguns. However, in experienced hands, multiple shots can be fired in lightening fast succession.

Each time the trigger is pulled on a semi-automatic, a shot is fired, the spent shell is ejected, and a new shell is chambered. The weapon uses the force generated by the previous shot to automatically eject the empty case and cycle the next round. Because the shooter only has to pull the trigger, shots can be fired more quickly when compared to other action types. Also, gas-operated semi-automatics produce noticeably less recoil than other shotguns, making them great options for recoil-sensitive shooters.

The design of a semi-automatic is relatively complex, making them more prone to jamming failures. Semi-autos can also require more maintenance and cleaning than simpler action designs, so only choose this type of shotgun if you aren’t afraid of cleaning your weapon.

What makes the shotgun so versatile is its ability to shoot projectiles of varying weight and size. Shotgun ammo generally falls into one of three main categories.

Birdshot is shotgun ammunition loaded with pellets with a diameter smaller than 5 millimeters. This type of ammunition is categorized by number. As the size of the shot increases, the number designation decreases. The smallest birdshot is #12 shot and the largest is size FF. Generally ineffective as defensive ammo, birdshot is typically used for hunting…you guessed it…birds (although some birdshot can also be used to hunt small game like squirrels and rabbits).

Like birdshot, buckshot is categorized by a number that decreases as the size of the pellets increase. The smallest buckshot is #4 (not to be confused with #4 birdshot). Sizes increase past #1 to include 000 (triple-ought), 00 (double-ought), and 0 (ought). Buckshot is the prefered shotgun ammunition for home defense. It is also a popular choice for hunting whitetail deer and other medium size game.

A slug is basically a large bullet loaded into a shotgun shell. Each slug fires only one large projectile rather than multiple smaller pellets. Slugs for smooth bore shotguns are rifled to create stability in flight and make them more accurate (although they are nowhere near as accurate as a rifle bullet).

Saboted slugs are designed for use in shotguns with rifled barrels. This type of slug is encased in a special wad which grips the rifling as the projectile moves down the barrel. This causes the projectile to spin making them more accurate and increasing their range.

Slugs are primarily used to hunt large game, especially in areas where hunting with a rifle is prohibited. They are also used for military and law enforcement purposes.

Choosing shotgun ammunition is a little more complicated than choosing the appropriate gauge and preferred pellet size. You also need to choose shells that will fit into the gun’s chamber (where the shell fits into the firearm for firing). Chamber size is measured in inches and is often stamped on the barrel. The most common shell lengths are 2 ¾ inches, 3 inches and 3 ½ inches. These lengths are determined by measuring the length of the spent hull.

It is important to only choose shells that are the appropriate length for your shotgun. Using shells longer than the length of your chamber is dangerous and could result in pressures greater than your firearm is designed to handle.

There are four basic choke designs most hunters use. You can learn more about why and how to use shotgun chokes in this article.

No matter which of the three primary types of shotguns you choose, the key to effective shooting is practice, practice, and more practice. The best way to increase proficiency and accuracy is to shoot, so don’t be afraid to send pellets downrange. We’ll see you at the range!

Parts of a Shotgun – A Guide