Parts of a Shotgun – A Guide A guide detailing all the different parts that make up the modern shotgun.

The traditional shotgun is one of the most versatile weapons ever created. Perfect for hunting everything from upland birds to big game, the shotgun is also an ideal choice for home defense and tactical applications.

Although the scattergun has been around for hundreds of years, it can be pretty intimidating for those who are new to shooting. The world of shotguns even has its own language that includes some pretty strange words.

It can be hard for experienced shooters to remember not everyone grew up around firearms. While the language of shooting rolls from our lips like the Mother Tongue, we easily forget newbies are still trying to learn the dialect. And since seasoned gunners can be suspicious of outsiders, it isn’t always easy for beginners to completely grasp the lingo, so they can speak it fluently.

This article is partly designed to be a basic language lesson for the uninitiated. However, it is also an anatomy lesson of sorts, helping everyone become a little more familiar with the inner workings of the ever popular shotgun.

Whether you are a new shooter yourself, or you’re planning to introduce your youngster to the sport, this guide is a great way to gain familiarity with one of America’s favorite weapons.

What is a Shotgun? Anatomy of a Shotgun 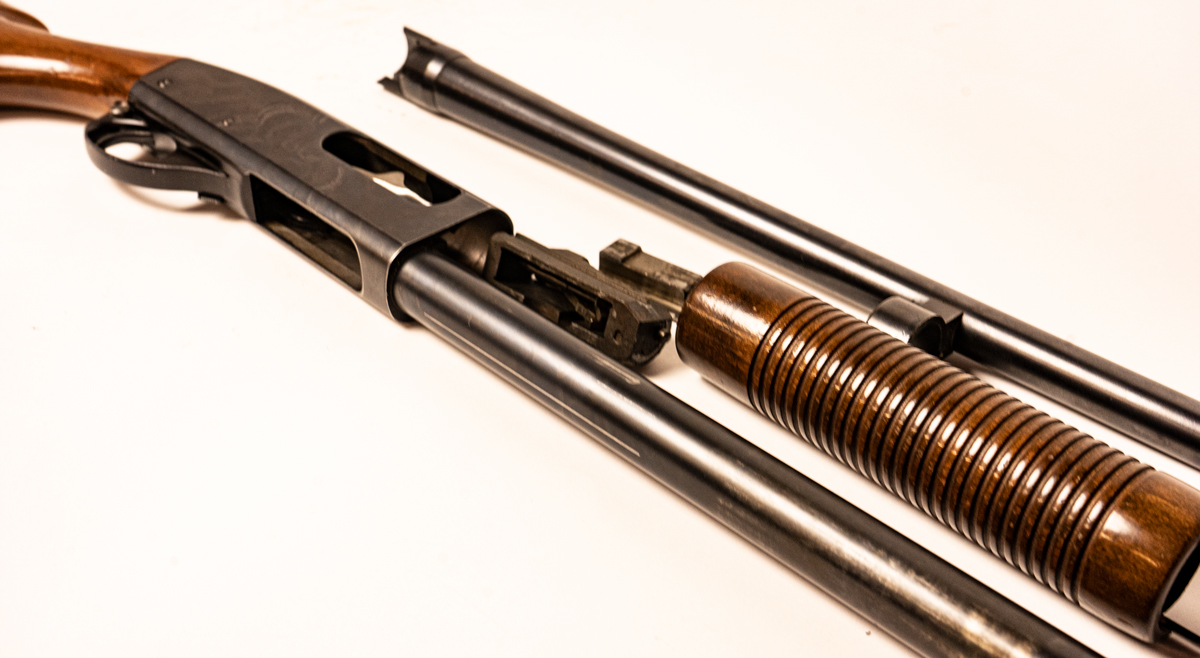 All shotguns have the same basic components, although there may be some variance between specific models. Here is a rundown of the basic parts of a shotgun, starting from the rear and working our way forward.

The stock is the part of the shotgun you steady against your shoulder muscles when you shoot. It also provides structural support for the gun’s action, barrel, and firing mechanism. There may be a recoil pad attached to the butt (the very back end of the stock) to help cushion your shoulder and dampen recoil (sometimes called “kick,” recoil is the backward movement of the gun when it is fired).

Most manufacturers make the stock from wood, laminated wood, a composite material like fiberglass or Kevlar. Sometimes, they’ll even use metal. A recoil pad helps cushion your shoulder from the gun’s “kick.”

The trigger guard is the piece that surrounds the trigger. This piece is usually made of metal and designed to help protect against accidental discharge caused by bumps, snags, or careless handling. 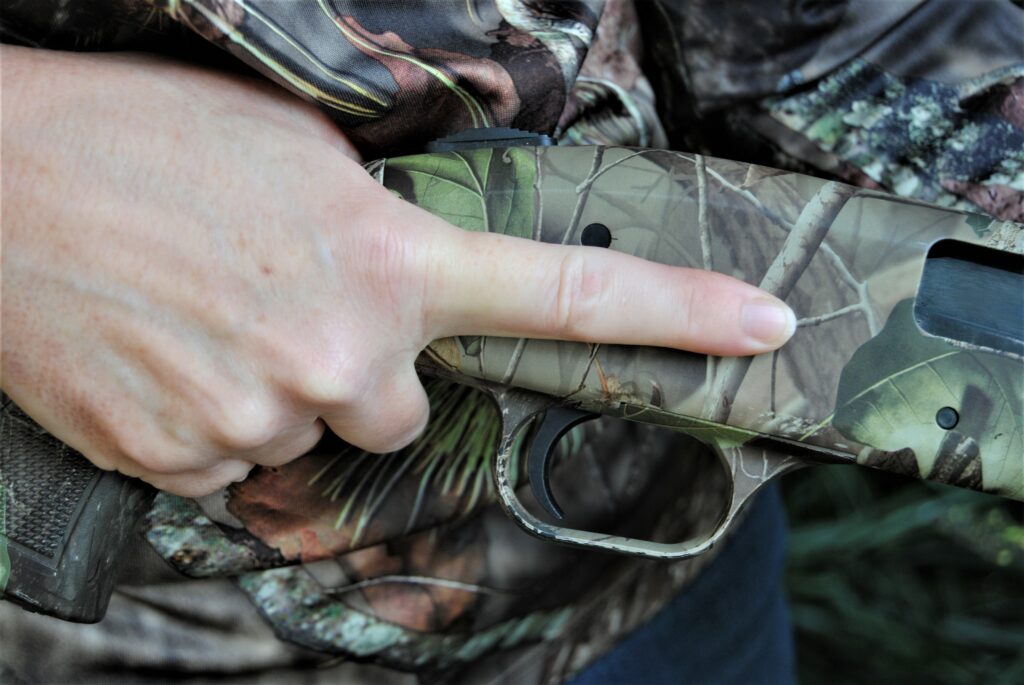 This is the lever you pull to initiate the firing sequence. Shotgun with the safety positioned on top of the receiver. Thumb on a trigger guard safety. The receiver up close and personal.

The bolt blocks the breech while propellant burns and moves back and forth for proper loading and unloading of shotshells. 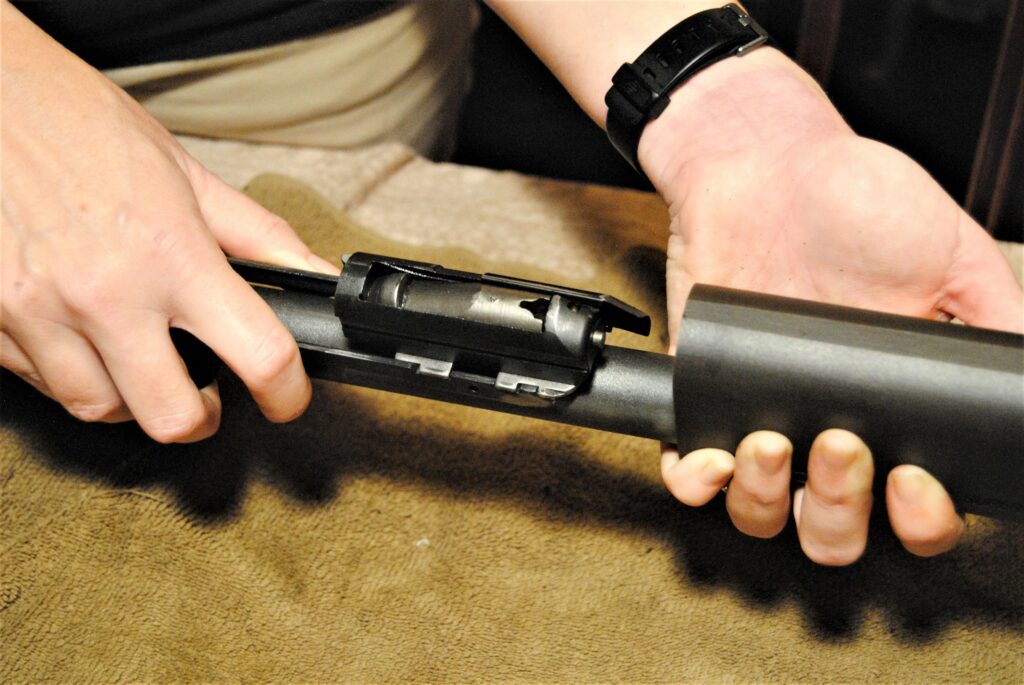 A closer look at the bolt.

The chamber is the part of the gun where the shotshell sits. You can access the chamber from the side or top. It depends on the model of your shotgun.

Chamber size refers to the length of the chamber and determines the length of shotshells the gun will safely fire. Most chambers measure 2 ¾, 3, or 3 ½ inches. 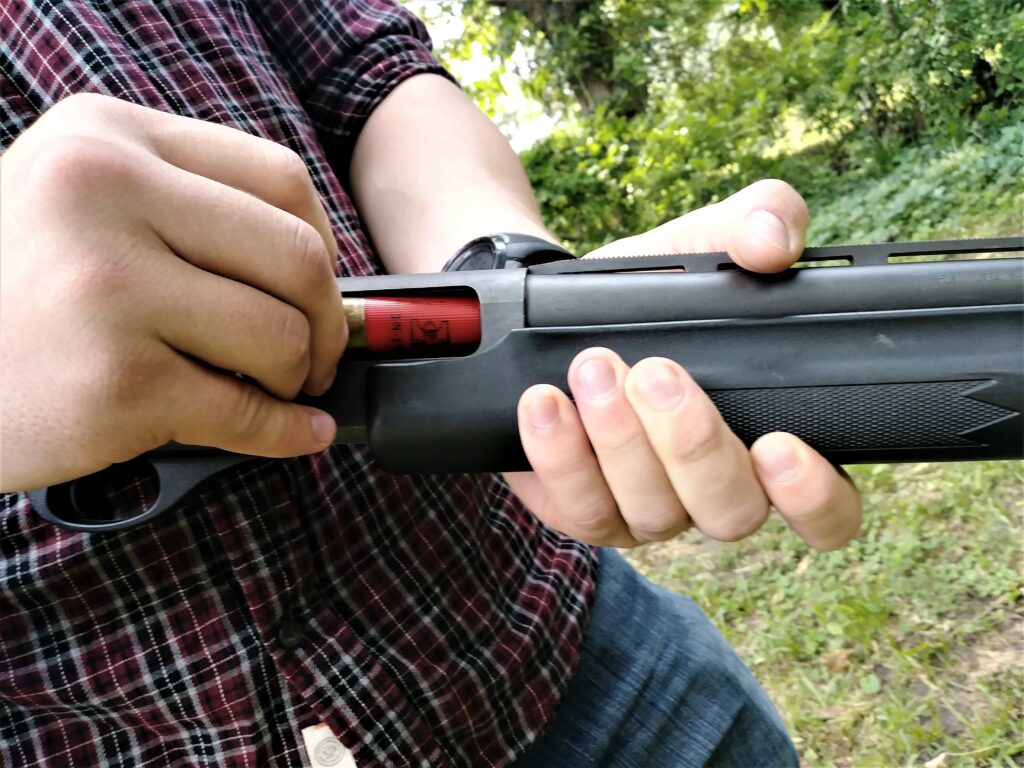 As the name implies, this is where all the action takes place. The action is the part of the shotgun that loads, fires, and unloads ammunition. Shotguns may have a pump-action, semi-automatic, bolt-action, or break-action (either single or double barrel). 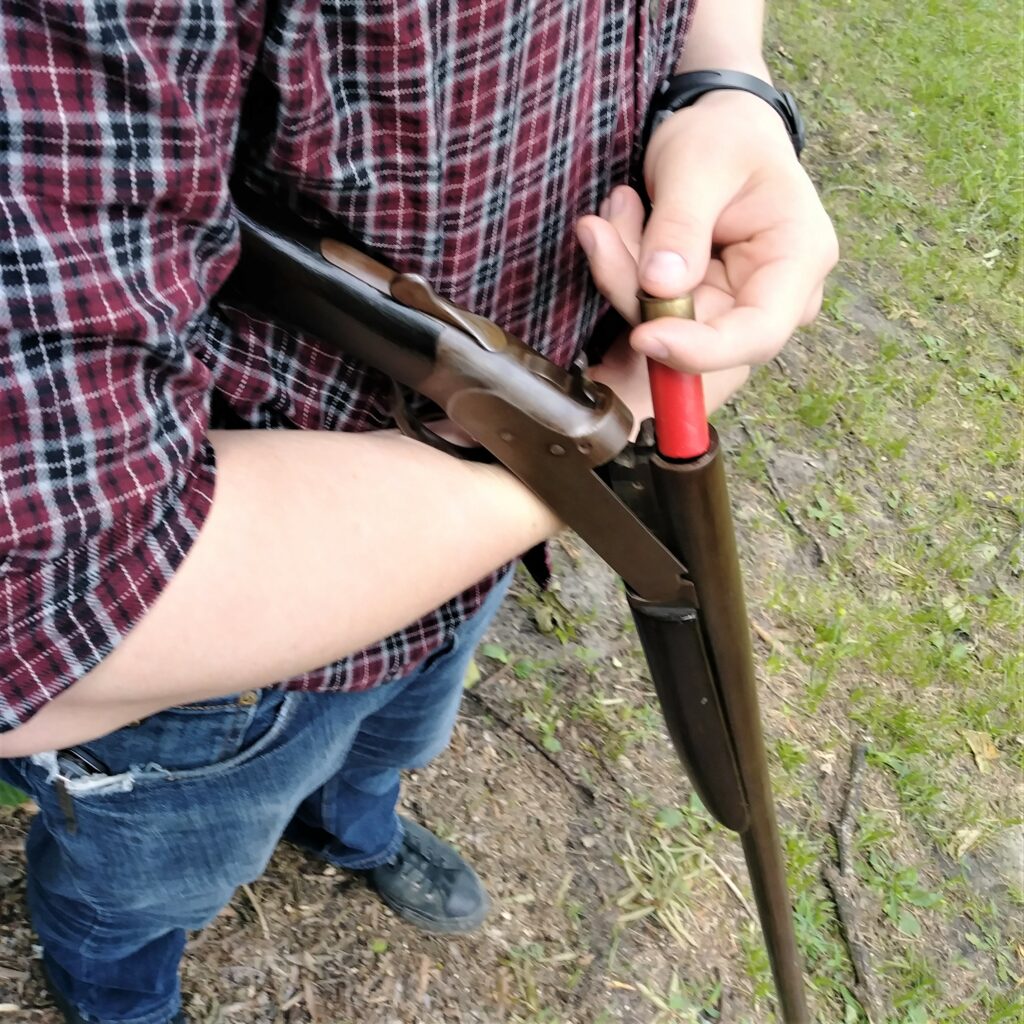 This is where the shotshells are held until they are loaded into the chamber by the action. Depending on the shotgun, the magazine may be a short tube located below the barrel or a box that snaps into the receiver.

The iconic “pump” of a pump action shotgun, the forend (also called the forestock) slides back to eject a spent shell and cock the action. When slid forward, it loads a new shotshell from the magazine into the chamber. The forend (or forestock) of a pump action shotgun.

The barrel is a long metal tube that provides a straight exit path for shot to travel as they are pushed forward by expanding gases.

The hollow inside of the barrel is called the bore. Most shotguns have a smooth bore. However, some barrels designed for sabot slugs will have rifled barrels (barrels with grooves machined into the barrel’s surface. “Rifling” spins a projectile as it travels down the barrel).

The diameter of the bore determines the gauge of the shotgun. When it comes to shotguns, the smaller the gauge, the wider the bore. We determine gauge by taking a lead ball that fits snugly inside the barrel and analyzing how many of those balls it would take to weigh a full pound. As an example, it takes twelve lead balls the diameter of a 12 gauge shotgun barrel to add up to a pound.

Thankfully, most shotguns have the gauge stamped somewhere on the barrel. Only load your shotgun with shotshells that match the gauge of your weapon. 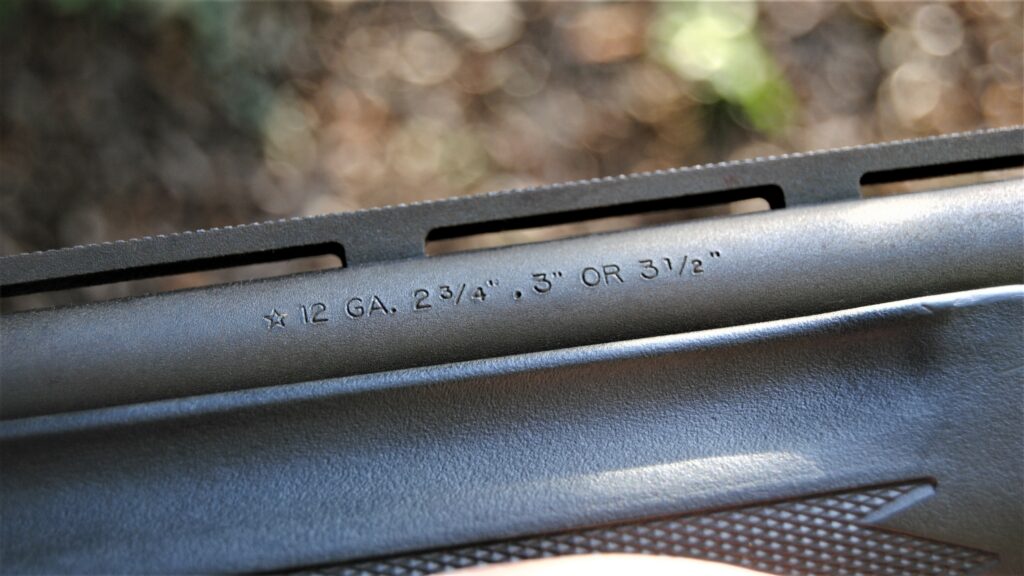 Most shotguns have the gauge stamped on the barrel.

The muzzle is the very front end of the barrel where the projectiles exit.

Some shotguns have a fixed choke integrated into the barrel. Others have interchangeable screw-in chokes so you can switch out chokes to match your shooting needs.

To learn more, we have a whole article on how to use chokes here. More traditional shotguns have a round bead on the top of the barrel used for aiming. “Drawing a bead” means lining up the sights with your target. Newer shotguns may have more rifle-style post and blade sights that are more appropriate for hunting big game. 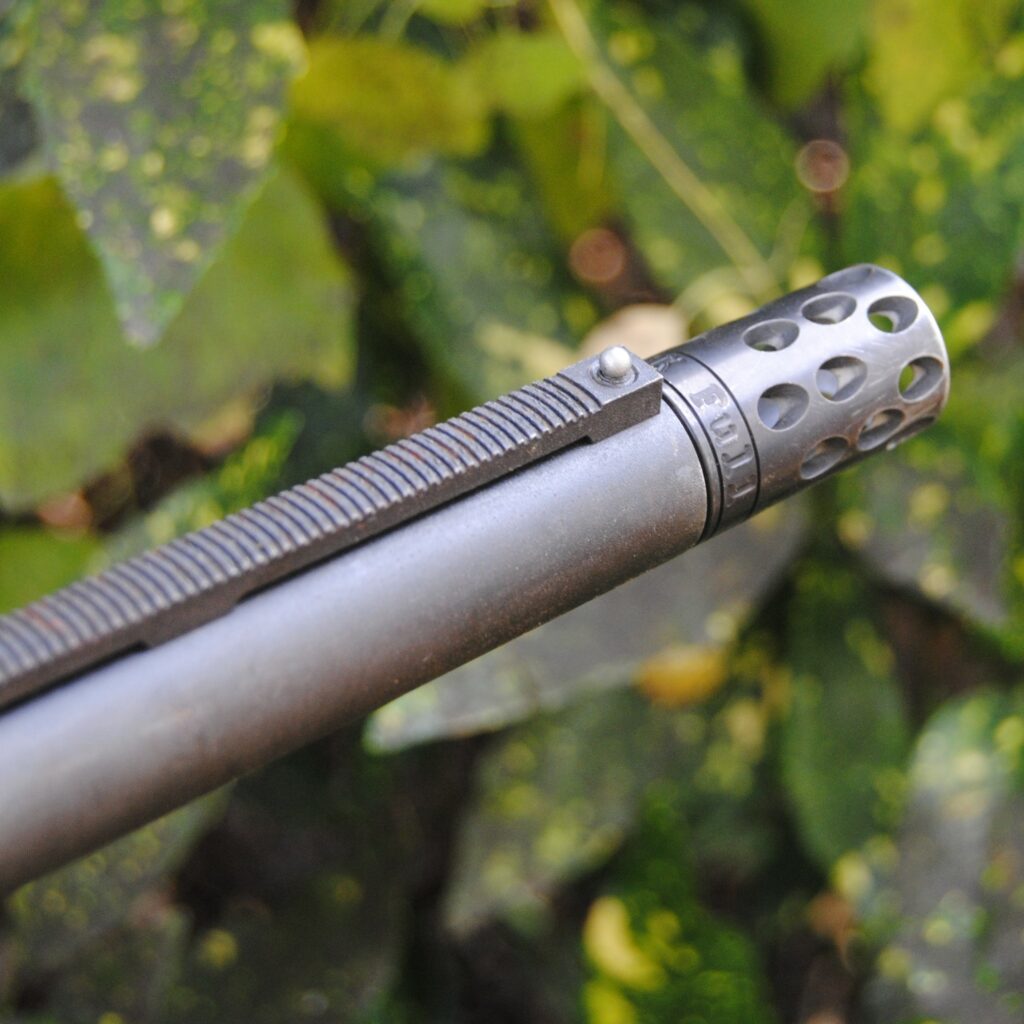 A shotgun with modern fiber optic post and blade sights.

Shotguns are versatile weapons. You can use them for everything from hunting to home defense. These weapons have been around for hundreds of years. While their design is relatively simple, the regulations and traditions surrounding these iconic firearms can get pretty complicated.

It is always a good idea to approach everything in the world of shooting with as much knowledge as possible. The information contained here is relatively basic. Use this information simply as a starting point for better understanding. Shotguns are fascinating weapons, and there is plenty more to learn.

The Correct Way to Shoulder a Shotgun