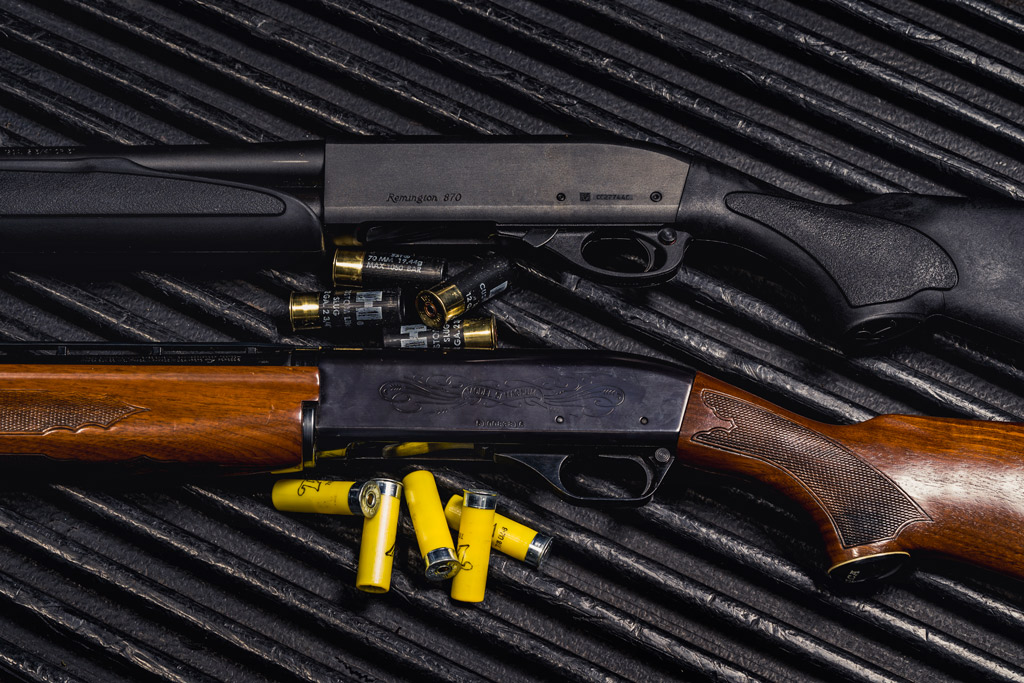 It’s a common debate, especially among first-time shotgun buyers. Should you go with a 12 gauge or a 20 gauge shotgun? In this article, let’s look at the benefits of each caliber and why you might select one over the other.

When comparing shotguns and shotgun ammunition, few topics are as complex as 12 gauge vs. 20 gauge.

Comparisons for rifle or handgun cartridges have a generally-universal set of characteristics to compare; yes, there are variables, but not as many. With shotgun ammunition, you have slugs, shot size, shell length, and other variables that add complexities to an already complex subject.

Despite the complexities, you can make fair comparisons between 12-gauge and 20-gauge calibers and ammo. This should allow you to make a clear decision on your firearm choice.

In This Case, Smaller is Bigger

Hunters and trap shooters understand that the lower the number, the larger the caliber in a gauge-designated shotgun. If it’s been a while since you’ve reviewed calibers, or if you’re simply new to firearms, it helps to quickly review how gauges are determined and why a smaller number means a bigger shell.

Gauge in determined by the number of lead balls with the same diameter as the barrel that it would take to weigh one pound.

History of the Shotgun Shell

In the early days of firearms, almost all guns could fire both solid-piece single projectiles (bullets or “balls”) as well as “shot,” which in many cases could be just about any hard, solid object that could be crammed down the barrel. As rifling was developed and the bores of long guns became smaller, the shotgun became its own separate entity. Common guns could no longer shoot both shot and bullets.

Shotguns became a popular tool in bird hunting, and found use among guards and law enforcement; it wasn’t until later in the 19th century that they started to become useful in  the military. Although they were used by both sides during the Civil War, the shotgun became especially useful in the trench warfare of World War I. It also saw service in the tight jungle combat of World War II’s Pacific Theater.

Today, shotguns are largely a specialty weapon among the military. Their most common purpose is a hunting tool.  However, many of us rely on shotguns for home defense and many others are passionate about shotgun shooting sports like trap and skeet.

The most popular shotgun caliber, by far, is the 12-gauge. But the 20-gauge, which is smaller and lighter, certainly has its uses among hunters and people concerned with home-defense. It’s obvious both calibers have a loyal fanbase all over the country.

You would think that because 20-gauge ammunition has less material, it would be cheaper, but this is not necessarily the case. In most stores, you will find that 12-gauge ammunition is just as affordable as 20-gauge; if there’s a difference, it’s slight at best.

By “spread,” we are referring to the width, height, and length (commonly called the “string”) of the pellets fired from the shell. In most cases, you will find that 12-gauge shotguns have a wider and more dense spread, although this is heavily dependent on the choke you are using. However, if a wide (while still effective) spread is important, a 12-gauge gives you better results.

When you compare the photos above, it’s clear there are more pellets on target and it’s a much more dense pattern for the 12 gauge.

As you might assume, the recoil from the smaller 20-gauge is easier and more manageable. Experienced shooters, children, and some smaller individuals may find that the 20-gauge is easier to handle. At least in theory, if you find the gun easier to handle your accuracy will be better. Not to mention you’ll be more confident which leads to a more enjoyable time shooting.

So, in the 12 gauge vs. 20 gauge debate, if you’re a younger shooter the recoil advantage might be enough to have you leaning toward the smaller shotgun.

When it comes to overall power, including velocity and energy, the 12-gauge wins virtually any fair comparison. The 12-gauge is simply too large for the 20-gauge to stand a chance in this area, as the 12-gauge delivers more speed and power to the target.

Because the 12-gauge, in general, is faster in exit velocity than the 20-gauge, it will also have a better effective range.

Because of that increased range, hunters can place shots with confidence on geese and ducks that may be out of range for users of a 20-gauge shotgun. The same is true for slug shells we referenced earlier; despite throwing a lighter slug, the 20-gauge has more drop than the 12-gauge.

“Versatility” is a tough characteristic to determine in any firearms comparison, but in a shotgun it can be almost impossible. (Because, quite frankly, they are all versatile.)

While the 20-gauge is certainly a great all-around gun, most would agree that the 12-gauge is the more versatile of the two. With a 12-gauge shotgun, you can do a wide range of activities, especially given the choke options that are available with today’s firearms. Also, most ammo manufacturers have twice or three-times as many 12-gauge options than 20-gauge choices.

With a 12-gauge shotgun you can have more power for sports like deer and turkey. You also have the range required to make longer shots on fowl such as geese and migrating ducks. You can also scale down the 12-gauge with shorter, smaller ammunition, allowing you to pursue smaller game. While the 20-gauge is undoubtably a versatile load, we think the 12-gauge has a slight edge.

Either the 12-gauge or the 20-gauge can give you outstanding performance in the field. Frankly, both are formidable home-defense tools. (A 20-gauge shot can deliver over twice as much energy as a .44 Remington Magnum, so lack of power is not a concern.)

If you want a versatile hunting firearm, with practically unlimited ammunition choices, the 12-gauge will suit you well. However, if you want a smaller firearm for small game or youth hunters or trap shooters, the 20-gauge may be your best option.

Have thoughts on this great caliber debate? We’d love to hear them in the comments below!