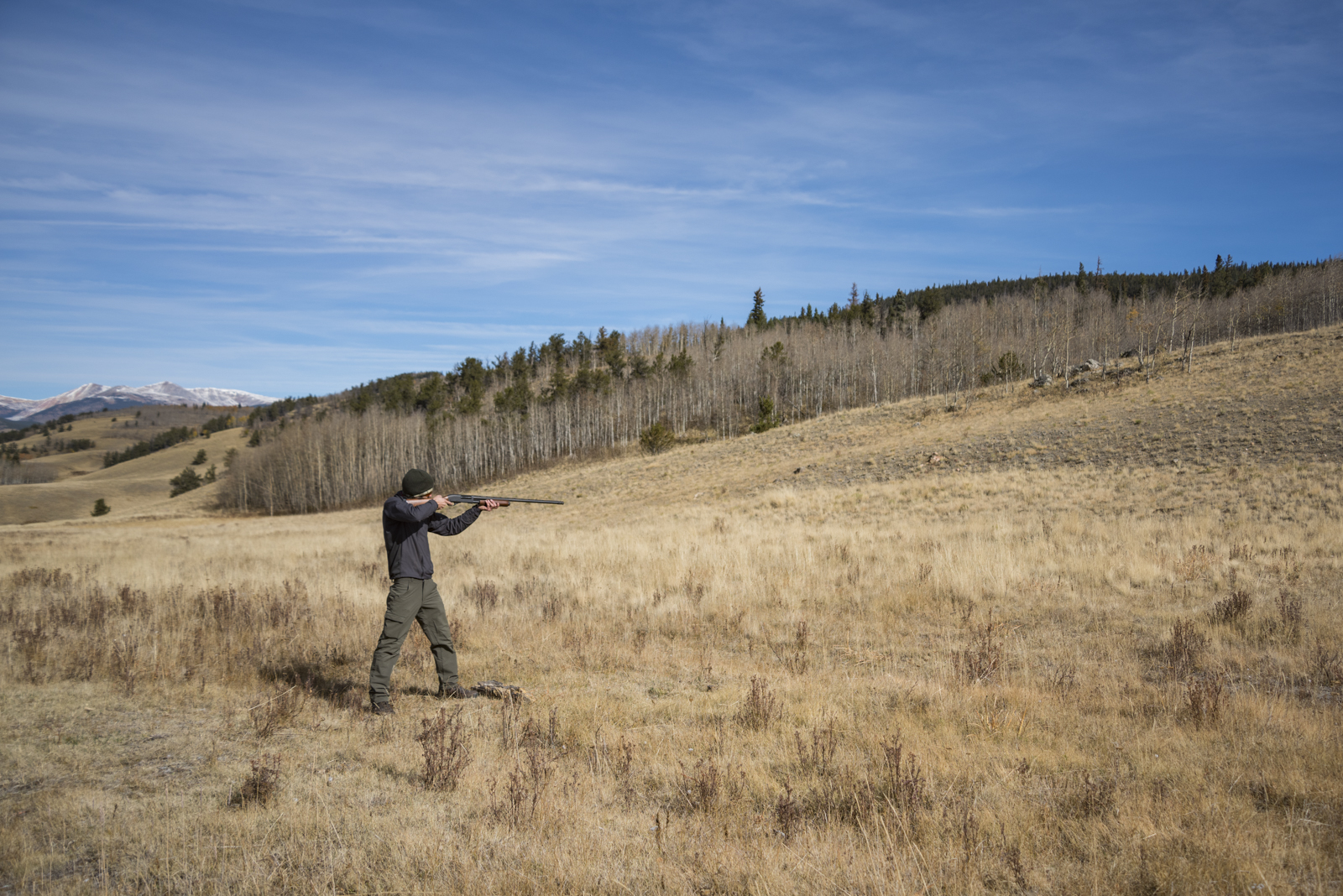 Shotgun chokes are a great way to tailor your 12 gauge or 20 gauge loads to a precise pattern. Having this sort of customization can be a huge resource whether you’re looking to hunt ducks at a distance or a larger game relatively close-by.

If you’ve spent much time in the field, you know shotguns use shells for ammunition. Each shell is loaded with dozens of round shot pellets. When the shotgun fires, shot pellets fly out the end of the barrel, known as the muzzle. The advantage of shooting shotgun pellets is that the pellets spread out covering a larger area as opposed to one single bullet like out of a rifle. This gives the shooter an advantage when shooting fast moving and smaller targets, such as birds, waterfowl, or rabbits.

Sometimes a shooter may want the pellets to stay closer together and travel farther, or spread out faster and not travel as far. This is known as spread, and spread can be controlled by an attachment known as a shotgun choke. 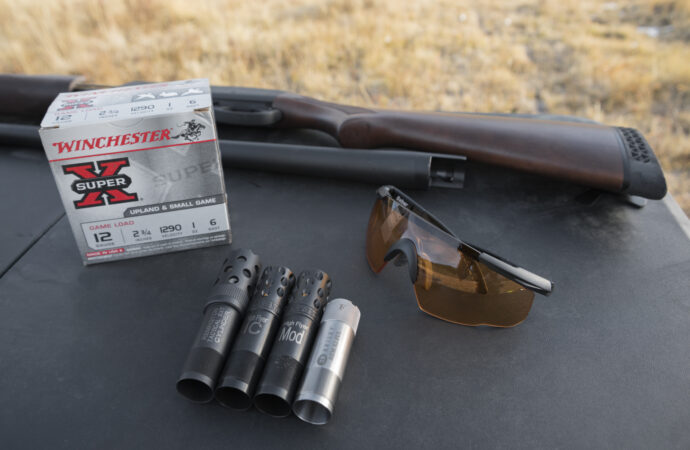 As a shotgun shell releases pellets they travel through the barrel in a cluster. As the cluster leaves the barrel, the pellets begin to widen their pattern.

A choke constricts the shot pellets as they fly out of the end of a barrel. This is done by the diameter of the inside of the choke becoming smaller towards the end of the barrel – the normal diameter is “choked down”, so to speak. The constriction causes a small, large, or somewhere in-between pattern that the shooter desires for the type of hunting or training they are performing. A shotgun choke can either screw onto the end of a barrel or come directly built into the barrel of a shotgun.

There are also subdivisions of these chokes that give shooters even more control over their spread. Generally, you can expect to pay between $25 and $100 for a quality choke to pair with your 12 or 20 gauge shotgun.

Each choke type constricts shotgun pellets to a specific pattern size depending on how far the pellets have traveled from the end of the muzzle. One produces a smaller pattern size than the last, with the cylinder giving you the widest pattern and the full giving you the most constricted.  I will discuss the differences in these chokes based on the most common shotgun gauge used, the 12-gauge.

The cylinder choke does not actually constrict the pellets and merely keeps the pattern size to that of the barrel being used. This means the diameter is the same as the barrel, or a 0-inch difference in diameter size to the barrel. This is the widest pattern. The cylinder choke works best at around 20 yards for up-close fast moving targets, such as a stirred up close-quarters quail or rabbit, or up-close clay targets. This choke is also mainly used for close-quarters or indoor self-defense as the pattern covers a large area very quickly.

The second choke with a slightly smaller pattern size is the improved cylinder choke. The improved cylinder is actually the first choke to constrict the pellets, at .010-in smaller diameter than the barrel. This slight constriction of the barrel allows for a still-wide cluster of pellets to travel further, about 30 yards. This enables the shooter to be able to reach out and still hit a fast moving, smaller target. Improved Cylinder chokes are a good choke choice for clay targets that are thrown a little further out. It is also good for smaller, faster flying game such as dove or teal.

The modified (or mod) choke, measures .020-in in diameter. This is a versatile choke for all types of shooting at distances between 30-40 yards. The mod choke is great for waterfowl, pheasant, turkey, and is what I would consider the best go-to all-around choke. If you do not plan on purchasing a shotgun that has a barrel with interchangeable chokes, I would suggest getting one that has a modified barrel first. This way you have the most versatile built-in choke barrel. There also is as what is known as lightly modified (or light mod) choke. These offer a little less constriction and improved mod that has a little more constriction.

Full chokes constrict the barrel .35-inches, making an ideal addition to a shotgun that’s hunting geese or duck at about 40 yards out and beyond. Full chokes were once much more widely used by outdoorsmen than they are today because of the transition from lead to steel shot.

Besides these four main classifications of chokes, there is also what is known as a skeet choke, which falls between an improved cylinder and a modified choke. This is popular for clay target shooting enthusiasts as it allows the shooter to shoot clay both at closer and slightly farther ranges between 20-30 yards. A light modified choke is also a good option for clay target shooting practice as well.

There are some basics of how to care for and install a shotgun choke that you should know. A choke screws into the end of a shotgun muzzle by using threads, just like what you’d find on a bolt. There are threads on both the outside of the choke and the inside of the muzzle.
Installing a choke is relatively easy. First, you will want to place a light coat of choke or gun oil on the threads, so that the choke does not seize and get stuck after firing. Next, place the choke threads into the end of the barrel and screw in until hand tight. After screwing until hand tight, use a choke key and gently tighten until the choke is all the way tightened into the muzzle.

Be sure to not over tighten, as this can cause the choke to become stuck after firing. Though, also be leery of a loose choke. Firing the shotgun with a loose choke can damage the inside edge of the shotgun barrel, choke, and threads as well. Never fire a shotgun that has a barrel with a choke without the choke in the muzzle. This can damage the threads, causing the muzzle to longer accept a choke, thus making the barrel useless. You can watch the video below for a demonstration on how install a shotgun choke. 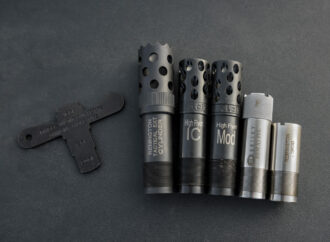 Considerations Before You Shoot

There are some important specifics that should be noted when deciding what choke to use.

For one, steel pellets are not recommended to be fired through chokes that have a constriction size smaller than improved modified. As the constriction of a choke compresses the pellets together, too much pressure can be applied on the barrel if you are using steel, potentially damaging or even exploding the barrel.

Lead pellets, on the other hand are a softer metal and are able to be constricted through the end of the muzzle regardless of choke constriction.

Note: In 1991, federal law banned lead shot for hunting waterfowl. Be sure that you do not shoot lead however at waterfowl over bodies of water or on land that specifically restricts the use of lead pellet shotgun shells.

I chose lead for every shot because lead has more of a tendency to spread out. I felt that would show a more accurate spread pattern potential for each choke. After shooting one shell at each target, I examined and measured the size of the pattern, the general way in which the pellets were clustered. You can see the results of my choke spread pattern test in the photos below:

The test came back to be fairly accurate as to how each choke is known to function and the pattern they are designed to provide. Practicing live-fire pattern tests is important for shotgun shooters to know how different chokes work and what patterns they produce at what distances.

This type of practice will make you a better shooter and/or hunter, so you know what shotgun chokes to use for the specific targets and distances. Every gun will produce a different pattern, even guns of the same exact model firing the exact same ammunition. Spending time performing pattern tests such as these will only make you a better shot, which will help you have better results in the field.

Remember, if you are target shooting on public land, always be sure to pick up all of your shell casing, target debris, and other trash.

A lot of the most experienced shotgun users have never performed choke spread pattern tests like the one I described above. Most still do not know everything there is to know about shotgun chokes. The only way to become more experienced is to practice.Shotgun chokes are fairly inexpensive and so is getting a barrel that accepts different chokes. Knowing the difference between the spread patterns of each of the main four chokes will only make you a better shooter whether you are hunting or just doing target practice. Shotgun shooting is a fun, active form of firearm shooting, and shooting with different chokes will only add to that.