A side by side look at the 38 Super vs. 45 ACP calibers. Let’s explore the benefits of each and help determine which is best for your needs.

The .45 ACP and .38 Super are two powerful and effective cartridges that can be used for self-defense, hunting, and target shooting. To choose the right one for your needs, you should understand the prices, speeds, energies, and capacities for the 38 Super vs. 45 ACP. 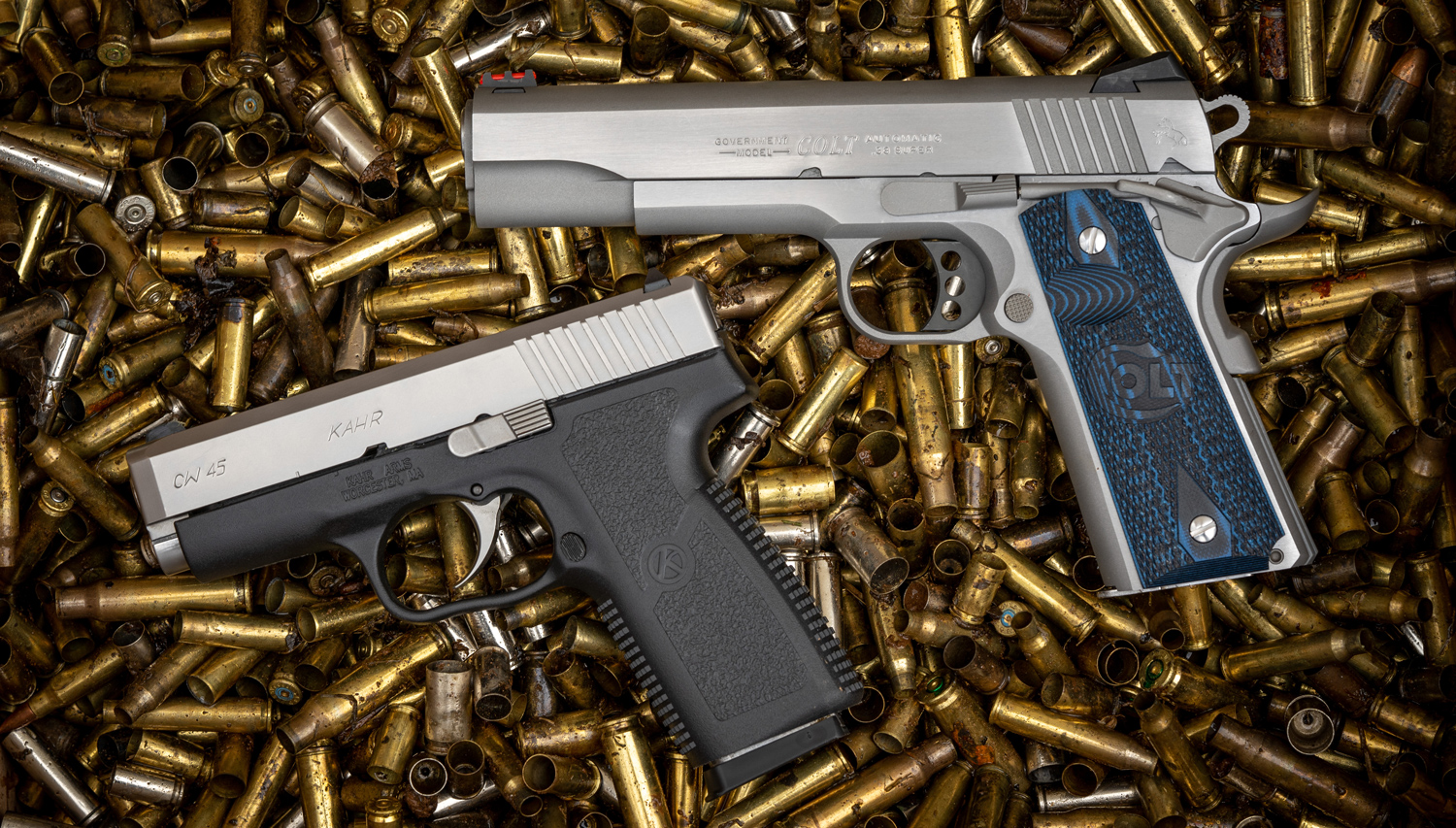 The .45 ACP, for “Automatic Colt Pistol,” is one of the most powerful handgun cartridges currently available, despite that fact that it was released only a few years after the end of the nineteenth century. Created by legendary firearms designer John Browning, the cartridge was intended for the M1911 semiautomatic handgun, which became an exceedingly popular option for military sidearms, as well as civilian use.

Thanks to long-range accuracy and power, .45 ACP ammo became an excellent military cartridge. It produces a strong but manageable recoil, although compact handguns firing this round can be harder to control.

Getting to Know the .38 Super

Also designed for use in the M1911 pistol, the .38 Super was made to be a high-speed version of the .38 ACP, and it has become a reliable option for hunting and self-defense, although it has experienced limited use compared to other handgun option.

38 Super ammunition cartridges distinguish themselves from other “.38” and “.357” rounds by their longer case. This case allows for more propellant to be loaded behind the projectile, creating greater velocity, straight-line trajectories, and superior ballistic energy. Because of its accuracy and speed, it is a popular choice for competition shooting.

There are very few of us who are not sensitive to ammunition costs. While some people’s budgets are larger than others, practically everyone needs to know how much they will spend on cartridges when selecting a specific rifle, handgun, or shotgun.

While there are certainly lower-cost cartridges, neither is particularly expensive. That said, the .45 ACP tends to have lower prices, largely because there are more available options. When writing this article, the lowest per-round price for a .45 ACP was $0.24; the .38 Super was $0.38 per round.

You can find some .38 Super rounds that are less expensive than certain .45 ACP rounds, but across the board the .45 will be a bit more affordable.

Because the .38 Super was designed to be a fast, high-velocity cartridge, it generally logs speeds that are faster than the .45 ACP. In some cases, it logs faster muzzle velocities than the .45.

We see this when looking at the same line of products from a specific manufacturer. Armscor makes full metal jacket ammunition for the .45 ACP and the .38 Super. The speed difference in these cartridges is significant, as the 230-grain .45 ACP has a speed of 830 feet-per-second (fps), while the 125-grain .38 Super has a speed of 1,357 fps. (And the .38 is not even a “+P” product.)

Comparing speeds is difficult, as many manufacturers don’t create .45 ACP and .38 Super products that align perfectly. (There is usually no two products with the same bullet size, for example.) That said, when looking at the general range of .45 ACP round, and comparing that to the general range of .38 Super rounds, you will find the .38 has speeds almost always above 1,000 fps, usually anywhere between 1,200 fps and 1,400 fps. The .45 Super, however, is usually around 900 to 1,200 fps.

Both of these rounds have factors that could contribute to a higher ballistic energy. The .45 ACP has a size advantage, and a larger projectile will strike with greater energy than a smaller one, assuming the speeds are the same.

However, the .38 Super has a speed advantage. If the two projectiles are the same size and shape, the faster one will deliver more energy.

So which is better?

Let’s start by looking at the two cartridges we compared above; the products from Armscor. The .45 ACP has a listed muzzle energy of 352 foot-pounds (ft-lbs), while the .38 Super’s product description lists the muzzle energy at 511 ft-lbs. It appears that in this case, the lighter, faster projectile has more energy.

How about the Winchester products? The 160-grain .45 ACP has a muzzle energy of 430 foot-pounds, while the .38 Super comes in at 426 ft-lbs. In this case, the difference is almost non-existent.

Across the range of products, it seems the .38 Super has a slight advantage in energy, but it is minimal.

The ability to load enough cartridges for sufficient self-defense is a serious concern for most handgun owners. While many are perfectly content carrying five or six rounds, most feel that more available round is rarely a bad thing. With that in mind, people often want to know which cartridge allows for more rounds per load.

Handgun design matters most in this case, but the cartridge can make a difference. However, it appears that there is very little difference in carrying capacity for each cartridge. No matter which you prefer, you can find handguns that carry ten or more rounds. However, there appears to be a wide selection of compact .45 ACP weapons that carry around six cartridges.

No matter which one you select, you can find affordable ammunition at ammotogo.com. Browse our inventory of .45 ACP and .38 Super cartridges and find the right products for hunting, target shooting, and personal protection!