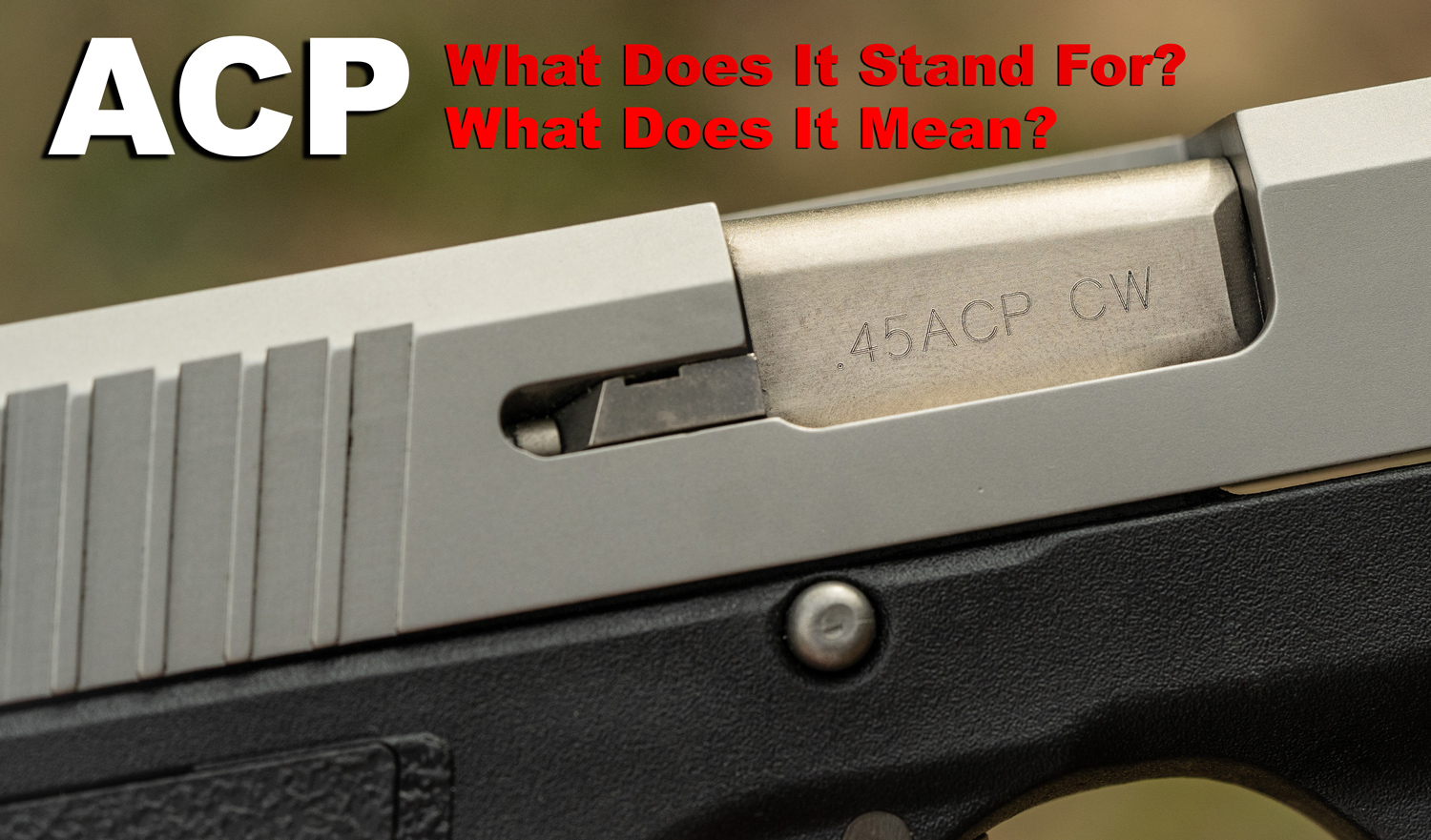 ACP is a common term you’ve probably seen on ammo and firearms. But what does it mean and what are the term’s roots?

Newcomers to the world of guns and ammo generally have tons of questions. Even those of us who grew up in the culture can be confused by all the gun lingo and alphabet soup acronyms. One of those common questions is, “What does ACP stand for?”

Although we may often see those three letters, not everyone knows exactly what they mean.

What Does ACP Stand For?

The longer answer? The letters “ACP” are used to denote various cartridges designed by John Browning for Colt semi-automatic pistols. These straight-sided cartridges are all similar in appearance and include .25 ACP, .32 ACP, .38 ACP, .380 ACP, and .45 ACP.  However, if we stop right there, we miss out on a very interesting story.

In the world of firearms, there may be no figure more legendary than John Moses Browning. Born in Utah in 1855, Browning built his first firearm at the tender age of 13 using tools and materials from his father’s gun shop.

At 24, Browning patented a self-cocking single-shot rifle with a falling block action. He later sold the design to the Winchester Repeating Arms Company.

In 1889, John Browning was shooting with some friends when he made an observation that would ultimately change the course of firearms history. As the men took turns shooting, Browning noticed that some tall grass would bend when his short friend, Will Wright, fired his weapon. Each time Will shot, the muzzle blast from his gun would send the weeds rippling, indicating a release of energy. This gave Browning the idea to harness that wasted energy to work the firearm’s action, cycling the next round into the chamber. By the end of that same day, Browning had developed a prototype for his own self-loading pistol.

Changing the World of Firearms

In 1895, Colt Manufacturing Company began production of the machine gun Browning had designed. This was the beginning of a lengthy collaboration between Colt Firearms and John Browning.  Although Browning wasn’t the first person to design a semi-automatic pistol, he was the first to invent a slide enclosing the barrel and the firing mechanism. Produced by both Colt and the Belgian firearm company, Fabrique National de Belgique (FN), Browning’s self-loading pistols range from the minuscule .25 caliber to the more substantial .45.

John Browning was a genius when it came to firearms design and innovation. In fact, this man invented more firearms than any other gunmaker in the history of the world. We have him to thank for the Winchester Model 1894 lever-action rifle, the Remington Model 1905 semi-automatic shotgun, the M2 Browning heavy machine gun (which still serves as the standard heavy machine gun of the United States military)… And the legendary Colt Model 1911 semi-automatic pistol.

When most people hear Automatic Colt Pistol, the first thing that comes to mind is the Colt .45 ACP Model 1911.  For more than a century, John Browning’s semi-auto M1911 has traveled with US troops to battlefields and military hot spots around the globe.

The weapon (and the .45 ACP ammunition designed to go with it) was designed in response to America’s first overseas insurgency, the Philippine-American War.  Unless you were paying close attention in high school history class, you probably don’t remember much about this conflict.

Although overshadowed by more famous “wars” like Korea and Vietnam, the Philippine-American War was America’s first foreign “adventure” as a new world power. Politics aside, the conflict was an important milestone in military history, because it forced the United States to rethink its weapons and military strategy.

Warfare in the Philippines

In the Philippines, American troops were confronted by the Moro tribesmen of the southern islands. The Moro were men of amazing physical endurance and savage fighting ability. Fueled by religious fanaticism (and probably some pretty potent opiates), the Moro engaged American troops with brutal guerilla tactics that often included close-quarters engagement. The tribesmen were typically armed with long, wavy kris blades which proved lethal in combat.  At the time, American troops carried the Colt M1892 revolver as their designated sidearm. However, the revolver’s .38 Colt Long cartridge was inadequate for reliably incapacitating these tribal warriors.

In combat, the Moro often tied off bleeding limbs to prevent blood loss and continued charging, even after being shot several times.   Their violent and bloody encounters with Moro warriors made the US Army realize the necessity for a heavier round with greater stopping power.

In 1906, the United States military began testing several cartridges and pistol designs for combat use.  The cartridge that emerged as a clear winner was the .45 Automatic Colt Pistol (.45 ACP for short). Several pistols were also tested, and Browning’s auto-loading pistol, the Colt Model 1911, was officially adopted by the US Army just in time for the First World War.

The US continued to use the 1911 through Vietnam and much of the Cold War. The Beretta M9 eventually replaced the 1911 in 1985.  However, due to the M1911’s popularity, it was never completely phased out of military use. Even today, chances are good that America’s elite fighting soldiers have a 1911 strapped somewhere to their MOLLE gear when they charge into harm’s way.

Today, the 1911 continues to have a wildly committed fan base. There is definitely some serious nostalgia that contributes to its popularity (This is the sidearm that helped the United States win TWO World Wars!). However, there is more to the 1911 and its .45 ACP cartridge that helps maintain its appeal, even in the face of modern advances in small arms technology.

First, the 1911 and .45 ACP combine to deliver major stopping power. Although the cartridge produces some pretty lumbering velocities (usually less than 900 fps out of the muzzle), the projectiles are large and heavy. The bulk of the projectiles helps produce some serious, hard-hitting kinetic energy. With that powerful energy behind it, the .45 ACP penetrates deep and cuts a pretty wide .45 caliber wound channel as it goes.

Second, the recoil is relatively tame for such a large caliber. Some even claim it produces less perceived recoil than many lightweight .40 S&W pistols. The 1911’s bulk certainly helps absorb some of that recoil.

Finally, the 1911 makes a practical carry weapon. I know at first glance, the 1911 looks like a monster, but hear me out. Even though the 1911 Government model measures 9 inches and weighs a hefty 3 pounds, the slide is relatively slim. At less than an inch (.9 inches to be exact), the 1911 is significantly more slender than a Glock 17 (1.26 inches). And if you want to compare apples to apples, the Glock 21 (chambered for .45 ACP) is even wider.  That slender profile makes even the largest 1911 surprisingly easy to carry. It is still heavy, so you still might need a good sturdy belt to keep it from dragging your pants down.

While Browning’s Colt .45 ACP Model 1911 is certainly his most popular pistol/cartridge combo, he is also responsible for creating a whole host of other firearms and cartridges. Many of his pistol loads carry the ACP acronym, including:

The .50 BMG (12.7×99mm NATO and designated as the .50 Browning by the C.I.P.) was another cartridge he developed for the Browning .50 caliber machine gun. Browning also engineered the 9mm Browning Long (9 x 20mm SR), a centerfire pistol cartridge adopted by the Belgian, French, and Swedish military. And since he isn’t here to do the bragging, we’ll do it for him with this partial list of Browning’s most notable firearms.

The Colt .45 ACP Model 1911 is one of the most iconic weapons ever made, and we have Browning to thank for it. However, the contributions of John Moses Browning extend far beyond the Automatic Colt Pistol.  His early pump and lever action designs helped tame the American West. His military weapons like the .30 caliber machine gun and the .50 caliber M2 changed the course of world history.  It is difficult to believe that one man could contribute so much to the world in one lifetime. The extent of Browning’s impact is truly difficult to quantify, but we are certainly thankful for it nonetheless.