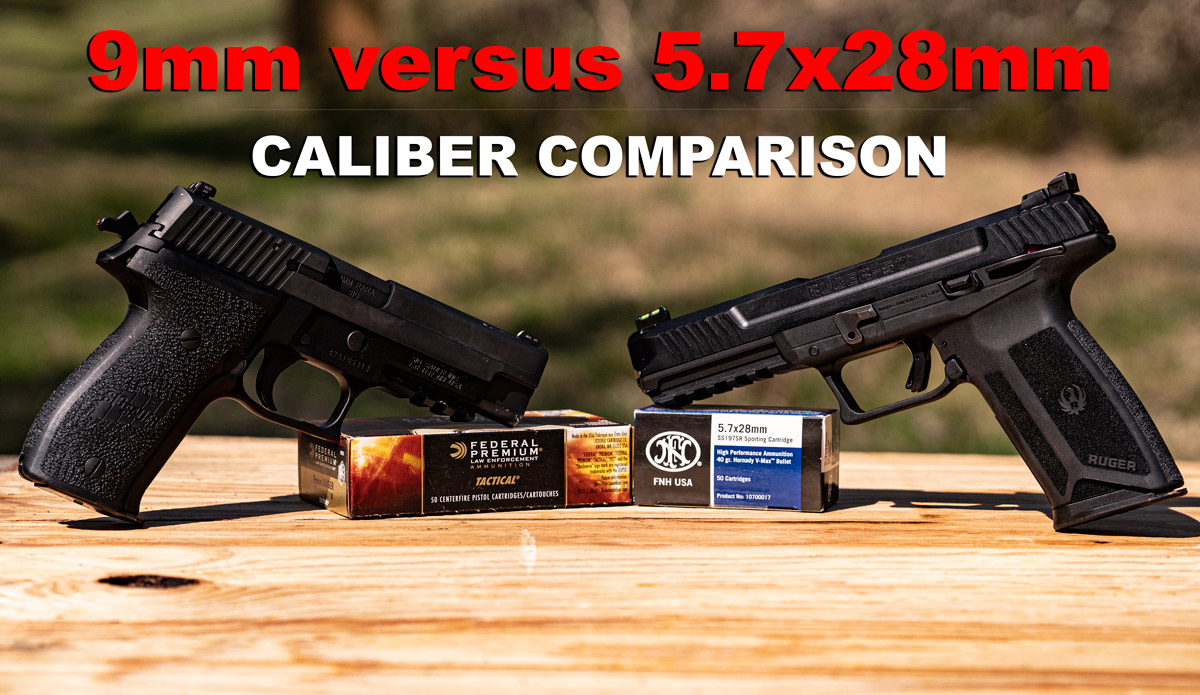 Sometimes in the shooting industry, a new cartridge will skyrocket the sale of a specific rifle or handgun. On occasion, the opposite occurs. A new weapon will breathe life into a previously forgotten (or at least, neglected) cartridge. This is the case with the new pistol from Ruger, called the “Ruger 57.” As buzz builds and ownership of the pistol picks up, we thought a 5.7×28 vs. 9mm caliber comparison would be a good way to get a feel for what the round is capable of.

Ruger’s new handgun, which comes with a standard 20-round magazine, is becoming one of the most talked-about pistols in the industry. Ruger announced it in late 2019 and it hit the market in early 2020. The Picatinny-railed pistol is fairly compact with a user-friendly design. But what really has shooters talking is probably the more accessible price point. While it has an MSRP of $799, it’s not uncommon to see dealers price them at closer to $700. That’s about 40% lower than what it would have cost you to start shooting FN-Herstal’s 5.7×28 before the Ruger arrived.

The Ruger 57’s popularity is also bringing new sales to its cartridge: the speedy, far-flying FN 5.7x28mm round.

This round is becoming so popular, that it may challenge one of the champions of the handgun world: the 9mm Luger. But is this cartridge ready for entry as one of the dominant rounds in the world, or is it another challenger that will quickly be dispatched and forgotten?

We can’t predict the future, but we can look at the two rounds and try to make a fair comparison.

Despite being released all the way back in 1901, 9×19 ammo continues to be an extremely popular round. It may be the most popular handgun cartridge in the world. With a supreme balance of energy, velocity, accuracy, and compact size, the 9mm has risen to the top ranks, thanks in large part to numerous handguns chambered for the round from leading manufacturers like Glock and SIG Sauer. 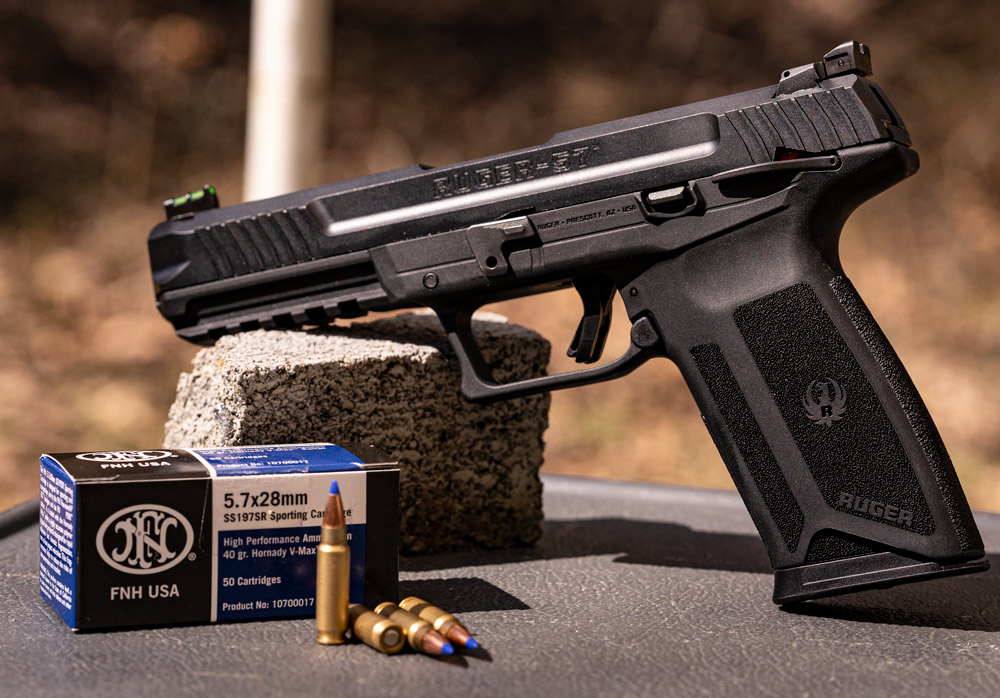 In the shooting industry, the FN 5.7x28mm is a newcomer. Released in the early 1990s, the cartridge was meant to be a high-velocity, low bullet-weight round that could be used by both military and police forces. Notably, the “5.7” was actually meant to replace the 9mm Luger among NATO forces, although full adoption never occurred. Regardless, the cartridge became a popular choice for private gun owners, especially hunters who wanted an accurate small-caliber handgun round they could use effectively at medium to long distances. While some see it as an expensive pistol, FN’s $1200 Five-SeveN MK2 pistol has enjoyed a loyal following. 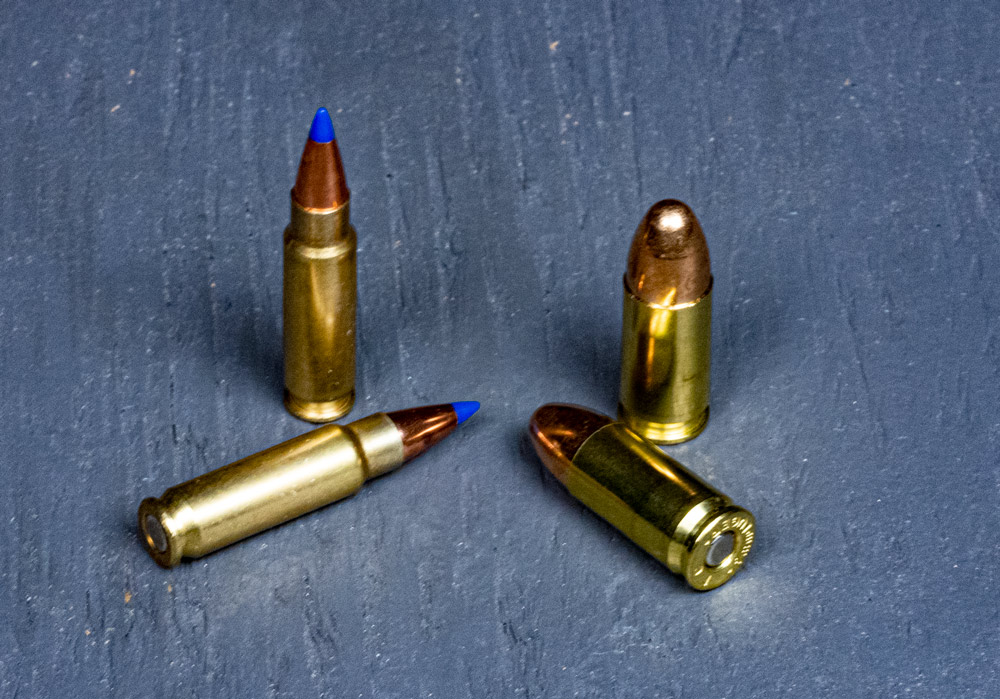 As I write this, there’s no question 9mm is the cheaper round to shoot.

Getting into the details – here’s the disclaimer you knew was coming: The prices listed below are subject to change and used for example only. For current pricing visit our site.

In regards to price, FN 5.7x28mm ammo simply can’t compete. 9mm Luger is one of the most affordable handgun cartridges available. This is largely due to the massive amount of available options. (When writing this article, there were 218 different 9mm products on the AmmunitionToGo.com website and only four 5.7 products.)

Even similar products show the 9mm to be more affordable. Total metal jacket (TMJ) rounds from Federal Premium were as low as $0.32 per round, while TMJ rounds from the same company in 5.7 were $0.57 per shot. So, if cost matters to you (and it does to me) there’s a clear winner in this 5.7×28 vs. 9mm battle. 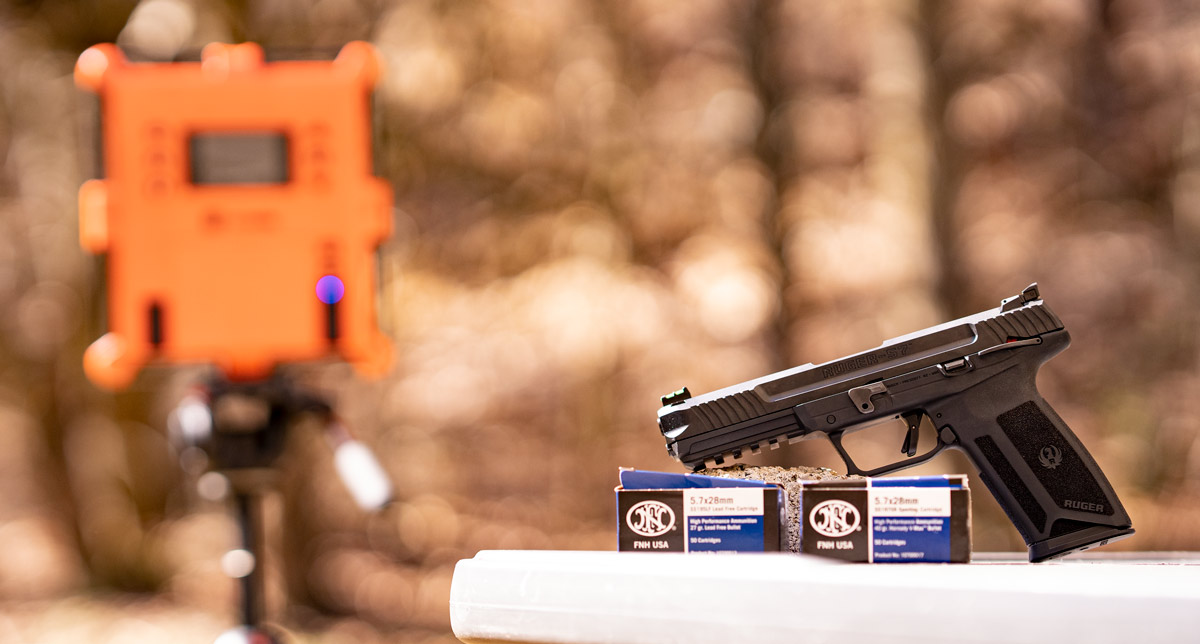 Speed is an important factor for ballistic performance, impacting accuracy, trajectory, energy, and penetration. The 9mm is well established as a reliable handgun cartridge, but if speed is your goal, the 5.7 delivers faster muzzle velocity.

The 9mm usually logs speeds ranging from about 1,000 to 1,400 feet per second (fps), depending on the specific load you shoot. That Federal TMJ round we discussed above, for example, has a muzzle velocity of 1,120 fps. In fact, in our testing of dozens of of 9mm rounds (see our 9mm Luger page, then scroll to bottom), the fastest round was 1,250 fps. Not bad at all, but it seems sluggish compared to the 5.7x28mm.

The Federal Premium 5.7 TMJ rounds that we discussed above have a manufacturer reported muzzle velocity of 2,250 fps. Clearly this is the faster of the two, and with greater speed and lighter bullet, it also maintains better downrange accuracy.

We’re always leery of manufacturer test results. Plus, we wanted to get a better sense of just what shooters should expect if they pick up a Ruger 57. So, we tested two of the better selling FNH loads with a chronograph.

These are two very different cartridges, with distinct differences in design, bullet size, and muzzle velocity. But when it comes to muzzle energy, they seem to be similar.

The 40-grain 5.7x28mm V-MAX, for example, holds a muzzle velocity of 367 foot-pounds (ft-lbs.) Similarly, the 115-grain 9mm Luger Lawman has a muzzle energy of 368 ft-lbs. These are fairly typical stats for the cartridges.

So there is a lot of overlap, but if you prioritize muzzle energy, the 9mm likely has the most potential, as it have more options. There are 9mm Luger cartridges that boast muzzle energies over 450 ft-lbs, while FN 5.7 cartridges tend to top out around 400 ft-lbs; not a huge difference, but a difference nonetheless.

Muzzle energy as a number is great but typically, the reason we care about it is because we’re looking to stop a threat. While not the perfect medium, Clear Ballistics synthetic gelatin can give us a relative idea of how ammo will perform.

We set up and fired some of the 40 grain FN V-Max loads into gel with the Ruger 57 from 10 feet away. In front of the gelatin testing material, we placed a standard four-layer cloth barrier.

Penetration was better than we expected. Of the five test rounds we fired, all five traveled at least the Federal Bureau of Investigation’s minimum of 12 inches. The farthest pushed through the gel 17″. (We recorded an average penetration of 14.4-inches in our five round group.)

In the wound channel, we did see evidence of some minor flaking from the bullets. We did not observe any signs of tumbling from the projectiles in gel.

Expansion was a different story. To put it kindly, we found the results here a little bit underwhelming. We measured the expanded diameter to be approximately 3/8″, on average. for our 5.7x28mm rounds. In our testing of 9mm self-defense loads, it’s not hard to find a 9×19 round that consistently expands to about double that. Keep in mind, we do expect new FN 5.7 ammo options to hit the market if and when the Ruger 57’s popularity grows. Speer, for example, is already working to get a new Gold Dot load to market this year for the firearm. 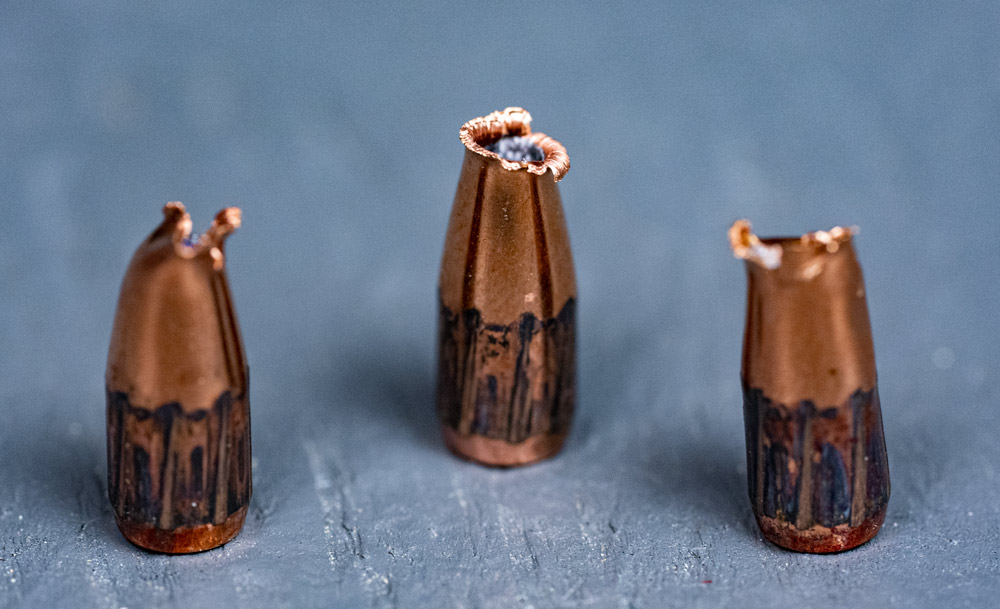 The backward force of the gun into your hands, known as “recoil,” is heavily tied to the cartridge’s muzzle energy. Hard-hitting recoil can make high-volume shooting, such as an afternoon at the range, painful on your hands and body. Good shooting technique can sometimes mitigate the effect but the force is still there.

Anecdotally, the Ruger 57 was much easier on the shooter than the Sig P226 9mm pistol when fired during our testing. However, neither of these rounds is considered a high-recoil cartridge, so this is really not a factor in their comparison. Basically, we expect few people will say “I’m buying the 9mm Luger because the 5.7 is too hard to handle,” or vice versa.

Whether you are using the handgun for target shooting or personal defense, you likely want to know how many rounds can be carried in a single load. This will largely depend on the handguns made for the cartridge, although cartridge design plays into account, and some cartridges allow for high load capacities.

Pistols for the 9mm Luger generally allow for 8 to as many as 15 rounds, although you can certainly find weapons that pack more. Handguns for the FN 5.7, however, usually can carry as many as 21 (20+1) while still remaining compact and concealable. The Ruger 57, for example, has a carrying capacity of 20+1, as does the popular FN Five-seven handgun.

The 5.7x28mm generally gives you more rounds on target here. Of course, if you’re looking for a smaller frame to use for concealed carry, your options in 5.7x28mm are extremely limited.

Either one of these cartridges will make a fantastic addition to your gun safe. 5.7×28 is a pleasure to shoot and we admittedly had a good time with the Ruger 57. However, if pricing is a serious concern, the 9mm Luger is likely your best choice. Of course, prices for the 5.7 could go down if the cartridge gains significant popularity. If speed and downrange target shooting is your goal, then you will likely be best served by the FN 5.7x28mm.