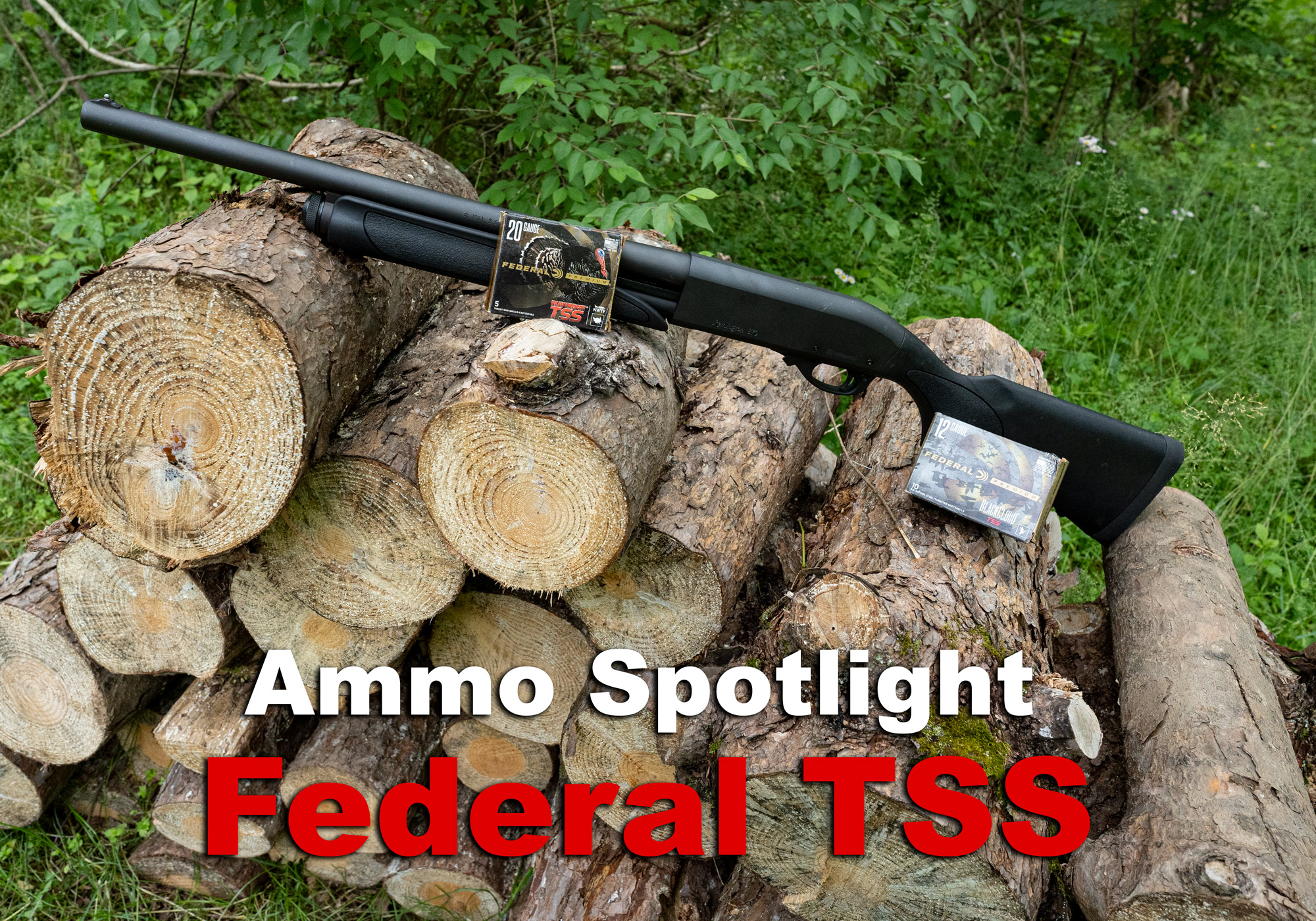 We shine our ammo spotlight on Federal’s TSS line of shotgun loads. What makes the TSS line special and is it worth the price?

Federal makes their Tungsten Super Shot (TSS) with tungsten alloy. It is commonly loaded in the Minnesotan manufacturer’s Heavyweight TSS line of shotgun ammunition, which is specialized for hunting turkey. Federal TSS is a premium hunting load. If you have ever priced Heavyweight TSS ammunition, then you have surely noticed it is considerably more expensive than traditional lead shot loads. So why bother with it? To answer that question, we first need to consider the pros and cons of lead shot. 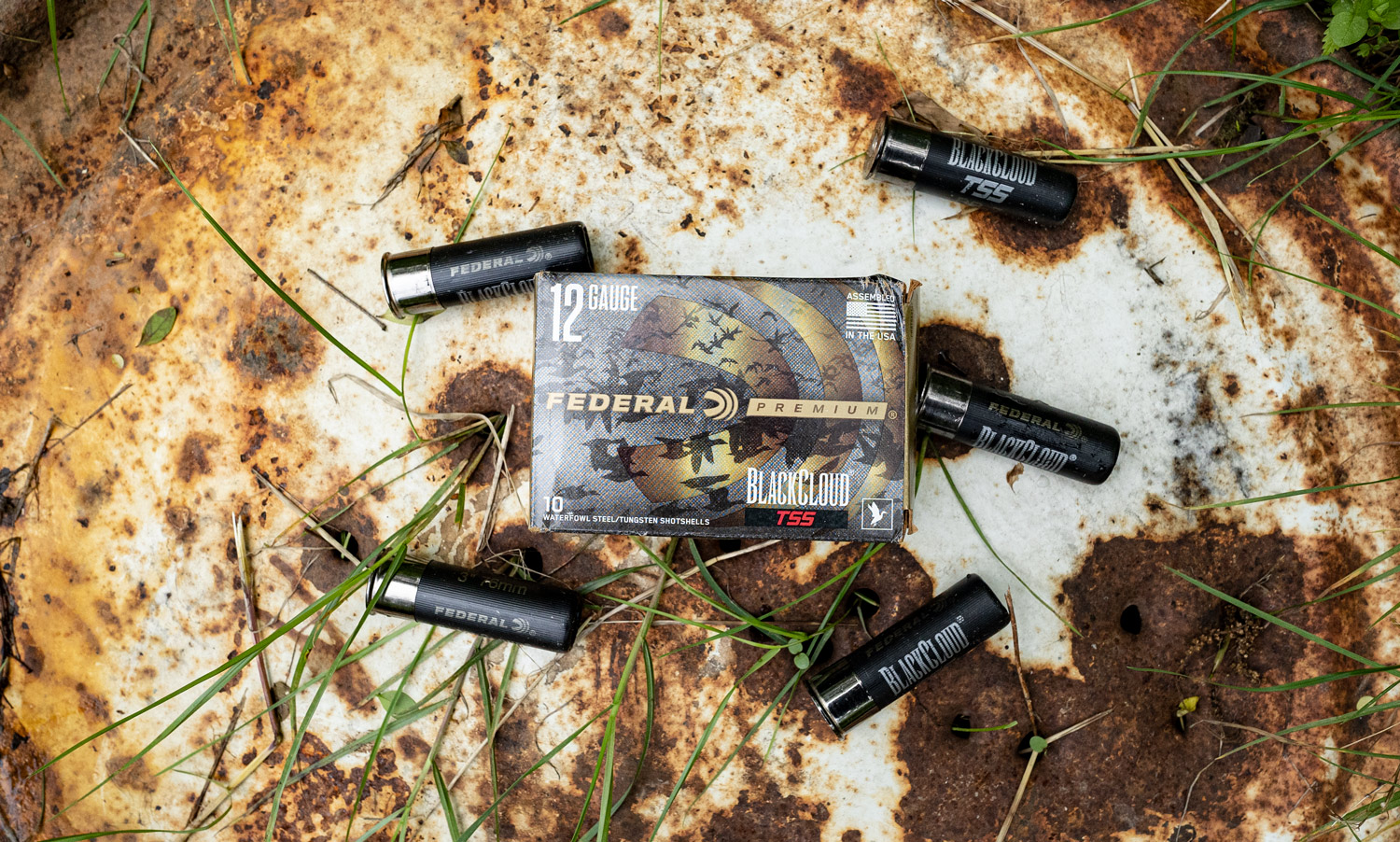 Lead is a nearly perfect material for shot pellets. It is very dense at 11.35 grams per cubic centimeter (g/cc). Because it packs so much weight into so little space, lead carries momentum that conveys good downrange velocities and deep penetration of game.

Unfortunately, lead is also toxic. It harms blood cell production, prevents calcium absorption, and in high enough concentrations can even cause brain damage. In 1986 the U.S. Fish and Wildlife Service estimated that spent lead shot was poisoning and killing as many as two million ducks every year!

Eagles can also accumulate lethal concentrations of lead in their bodies if they eat enough live birds containing shot, and lead consumption remains the leading cause of death for California Condors. (The same bird which Johnny Cash called “d*** yellow buzzards.”)

In 1991 the U.S. government issued a nationwide ban on the use of lead shot for hunting waterfowl. Legislators continue to ponder calling on the federal government to prohibit all lead-based ammunition and fishing tackle on the 568 million acres of land and water managed by the U.S. Fish and Wildlife Service.

What Are the Alternatives to Lead Shot?

Fortunately waterfowl hunters had a viable alternative: steel, which is completely nontoxic, has a density as high as 8.05 g/cc, and when loaded to a high enough muzzle velocity offers serviceable momentum for taking ducks and geese.

Ammo makers tried other nontoxic alternatives to lead such as nickel (8.9 g/cc) and bismuth (9.75 g/cc) and remain available. But the king of all of nontoxic shot materials is tungsten. It boasts a density of 19.35 g/cc, which is 70 percent greater than lead!

The only drawback to tungsten is its price tag. It comprises only 0.00011 percent of the earth’s crust, and about 85 percent of the rare metal is mined in China. It costs about $13.64 per pound, which is a steep climb up from lead.

What Is Federal TSS?

Federal doesn’t make TSS out of pure tungsten. It is tungsten alloy, and accordingly has a density of 18 g/cc. At that density TSS is still 58.5 percent denser than pure lead (and 56 percent denser than the lead alloy that is commonly used to make shot).

Heavyweight TSS shotshells are available in 410 Bore, 20 Gauge, and 12 Gauge shotshells. This ammunition features granulated buffering material in its shot column. It protects the shot against deformation that could impact pattern density.

A Heavyweight TSS round additionally features Federal’s FliteControl Flex wad. This wad erects petals around its base upon exiting the muzzle to promote more consistent in-flight separation from the shot. This even further improves the TSS’s pattern density. (The FliteControl Flex is not available in 410 Bore loads.)

Why Use TSS for Turkey Hunting?

Although turkey hunters aren’t bound by the same laws as waterfowl hunters (yet), the advantages heavier-than-lead shot like TSS offers can be well worth the added cost.

Federal TSS is the densest shot on the market. Because a single pellet of TSS is over 50 percent heavier than a lead shot pellet of the same size, it is able to (A) retain greater velocity and (B) penetrate up to 50 percent deeper.

Turkeys are perceptive birds, so being able to shoot them from greater distances is a huge advantage. TSS’s superior momentum greatly increases its effective range relative to lead shot. This allows hunters to take gobblers standing as far as 75 yards away – a significant improvement. And alongside a Heavyweight TSS shotshell’s other features which improve pattern density, TSS is able to put far more pellets on target dozens of yards out than lead could accomplish.

Turkeys are also rugged. Because TSS retains significantly more energy at any point throughout its trajectory, it consistently penetrates soft tissue 50 percent deeper than lead. The difference in TSS’s terminal ballistics could easily spell the difference between a failure and a delicious Thanksgiving dinner.

Finally, TSS makes turkey hunting more accessible. Back in the day hunters rarely considered any shell less powerful than 12 Gauge adequate for bagging turkey. But because TSS fits so much gobbler-busting potential in so little space, the lower-recoil 20 Gauge and even the 410 Bore have become viable turkey hunting rounds. Little Timmy, who would have gotten his socks knocked off by a 12 Gauge’s recoil,can now hunt with a lighter gun right alongside dear old dad!

Federal also has some options as part of their Black Cloud ammo line-up loaded with TSS.

The ban on lead shot for waterfowl hunting gave rise to several nontoxic shot alternatives. Although expensive, tungsten shot’s superior density has made it a popular choice for turkey hunting. Turkey hunters know longer range and deeper penetration pose significant advantages. TSS is Federal’s premium tungsten alloy shot, and when loaded in a Heavyweight TSS shell is a turkey hunter’s best ally in the field.