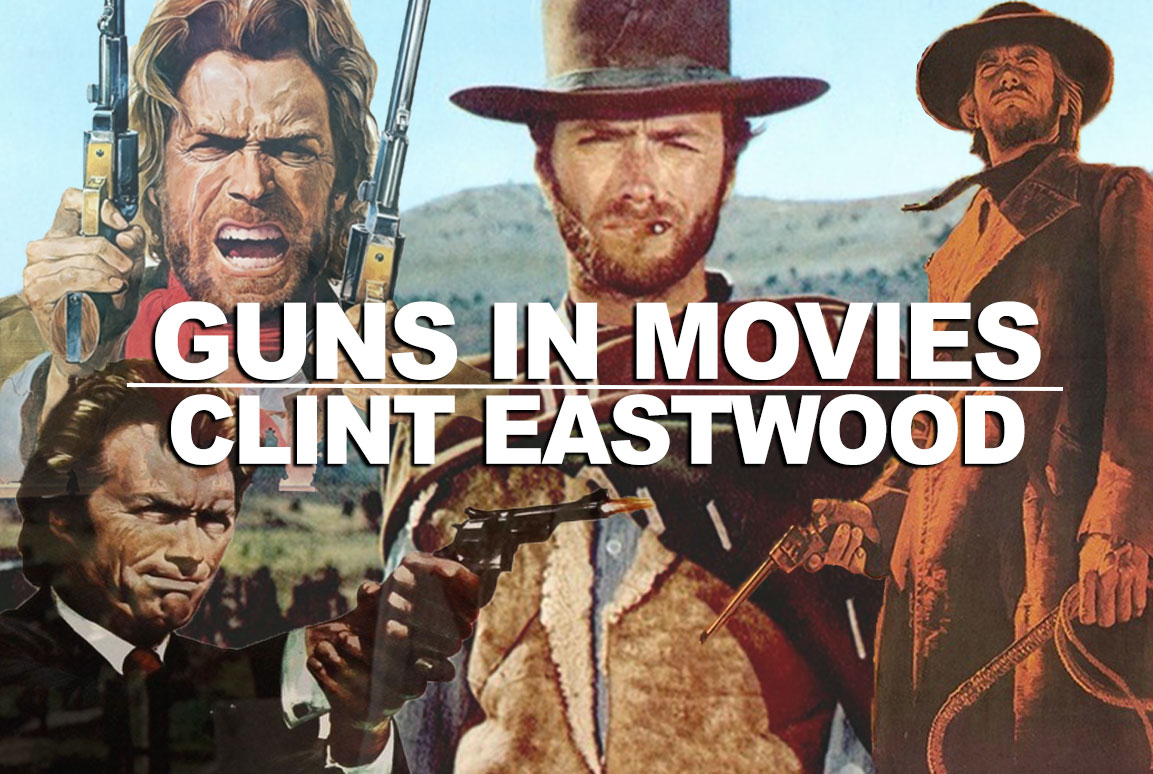 Few people have had as much success in, and as much influence on, American cinema as Clint Eastwood. He found his breakthrough playing a quiet, dangerous, and clever drifter in Sergio Leone’s spaghetti westerns, and has given American pop culture (especially gun owners) some of its most famous movie quotes while also becoming a highly […]

Few people have had as much success in, and as much influence on, American cinema as Clint Eastwood. He found his breakthrough playing a quiet, dangerous, and clever drifter in Sergio Leone’s spaghetti westerns, and has given American pop culture (especially gun owners) some of its most famous movie quotes while also becoming a highly respected director and producer.

He has starred in adrenaline-soaked action films and directed classic romances, giving Eastwood has a career that touches practically every facet of American cinema.

While not every movie in his collection is a jaw-clenching action film, many of his movies feature firearms that play almost as important a role as the man himself. With that in mind, let’s look at some of the most famous Clint Eastwood guns in movies.

While there were previous two movies in the “Dollar Trilogy” (Fistful of Dollars, For a Few Dollars More), the final film in the series, a three-hour epic about competitors chasing after buried treasure in the post-Civil-War west, launched Eastwood into stardom.

In the film, Eastwood totes an 1851 Navy revolver as his main sidearm. He also uses multiple long rifles, including a Sharps 1874 rifle, which he uses to sever a hangman’s rope from a distance; experts might say a little too much distance, but hey, it’s a movie!

Firearms / Ammo in The Good, The Bad, and The Ugly: 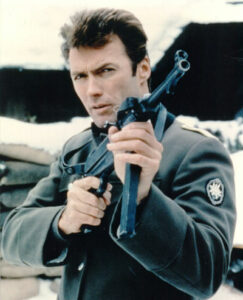 After success in the western genre, Eastwood branched out into other films, starting with thriller action and war films. Where Eagles Dare tells the story of a rescue mission set during World War II.

In the film, Eastwood and his team go in disguise as Nazi soldiers, so he sports some of the weapons used by the Axis powers, including the Wehrmacht MP40 submachine gun and the Walther PPK pistol.

Oddly enough, 40 years later the MP40 Submachine Gun Eastwood used in the film showed up in the news again. Someone showed up with the German gun at an amnesty event where police collect firearms in Somerset, England. While most guns dropped off at events like that are destroyed, police were smart enough to set Eastwood’s aside. The MP40 currently resides at the Royal Armouries Museum in the town of Leeds. (Most of Where Eagles Dare was filmed in Austria and Bavaria.)

After commercial box office success in multiple genres, Eastwood decided to get back to westerns with Two Mules for Sister Sarah, a story about a drifter who saves a nun from bandits; a nun that turns out to hide some important secrets. Escorting the nun to safety, he ends up involved in the Mexican fight against French invaders.

Throughout the film, Eastwood carries a Colt Single Action Army revolver, which were chambered for many cartridges, including the .45 Colt. He also uses a Winchester carbine rifle, and even gets his hands on a Gatling gun, which could have fired the .45-70 Government.

If it weren’t for the spaghetti westerns, Dirty Harry might be the film that is most associated with Clint Eastwood, at least the first half of his career. Playing a no-nonsense, skull-busting, old school detective struggling to adapt to a more sensitive world, Eastwood goes in pursuit of a serial killer, using a combination of cunning, firepower, and classic investigating.

This movie features Eastwood’s most famous firearm: the Smith & Wesson Model 29, chambered with a .44 Magnum which Eastwood calls, “the most powerful handgun in the world,” (no longer the case). In a famous rooftop scene, Eastwood uses a Winchester Model 70, a hunting and sniper rifle chambered for numerous rounds, including the .458 Winchester Magnum.

The first western directed by Eastwood, and only his second film directorship overall, High Plains Drifter drew heavily from the tone and style of spaghetti westerns. However, it has more of the traditional American western plot, with a wandering, dangerous, yet skillful stranger saving a town from criminals.

As the Stranger, Eastwood carries a Colt Single Action Army revolver, as well as an 1892 Winchester Carbine with a saddle ring, which may have loaded the .44-40 cartridge. Winchester’s 1892 was a follow-up to the 1886. Today, the Model 92 carbine is still available, chambered in 357 magnum and other calibers but it’s not hard to find the lever action for sale used in .44-40.

One of the most famous roles for Clint Eastwood, Josey Wales is a fictional character created by novelist Forrest Carter. The movies follows the adventures of a Missouri farmer whose family is killed by unionists during the Civil War, launching him into the war and a subsequent life of crime.

Eastwood gets to use numerous firearms in the film, including two Colt Walker 1847 revolvers and a Colt Army Model 1860.

By 1985, Clint Eastwood had long been established as a household name in American culture, and despite making a variety of movies, westerns remain his most popular genre. In Pale Rider, Eastwood plays a preacher with a mysterious past, a preacher who just happens to be an expert with a revolver and not bad with an axe handle either!

Besides the axe handle, Eastwood’s preacher also wields a Remington 1858 New Army Revolver which could have been loaded with .38 S&W. He also packs a Remington 1858 pocket revolver in is belt, which he uses to protect innocent prospectors from a greedy mining baron.

More thrilling drama than explosive action flick, In the Line of Fire shows Eastwood playing a secret service agent who was on duty during the Kennedy assassination and has been living with the burden ever since. While Eastwood was the starring man, John Malkovich stole the show playing the disenfranchised CIA agent who attempts to kill the current president and Eastwood’s character, earning multiple awards for the performance.

Unlike Eastwood’s westerns and action films, gunplay is not a significant part of the story, but it does play a role. Eastwood carries a SIG-Sauger P229, which have actually been carried by Secret Service agents. The character also has a personal weapon, a Smith & Wesson Model 19, which would have been chambered for .357 Magnums.

Firearms / Cartridges Used on In The Line of Fire:

Seen by many as Eastwood’s masterpiece, this dark revisionist western shows an aging Eastwood heading out for one last bounty hunt with his longtime companion, played by Morgan Freeman. The film takes a different approach to violence than most westerns, making it look ugly, dark, and regretful, a stark contrast to what we usually see from the genre. It was so critically acclaimed that it became only the third western to win the Oscar for Best Picture.

We see Eastwood using many firearms in this film, including a Starr 1854 Army percussion revolver and a Spencer 1860 repeating rifle with a saddle ring.

Playing a surly Korean-war vet who recently lost his wife, Eastwood delivers one of the most memorable performances of his career, in one of the most unique films he ever made. Dealing with a spoiled family, neighbors he can’t (or won’t) understand, and a neighborhood becoming enveloped in crime, Eastwood’s character grudgingly befriends an immigrant family living next door, while bringing the ire of local street gangs.

Although few shots are fired, the film shows Eastwood with multiple weapons, including his M1 Garand rifle, which his character kept after the Korean war. The grumpy Eastwood character also packs an M1911 semiautomatic, which he uses to defend his new friends.

On the Mount Rushmore of American movie stars who appear alongside guns, Clint Eastwood certainly has a place. Embraced by 2nd Amendment supporters alongside legends like John Wayne and Charlton Heston, Clint Eastwood’s legacy will surely live for generations. Now that you know what Eastwood was using in his films, you can safely recite more than just “do you feel lucky” to your movie quoting repertoire while at the range!