The trusty 12 gauge is one of the most popular tools to use to protect your family’s home. But what’s the best shotgun ammo for home defense? In this article, we explore some of your best options.

People have used shotguns to defend their cabins, farms, and houses for centuries. Many modern self-defense experts still consider the shotgun the ideal weapon for home defense. Even Joe Biden publicly touted the shotgun’s practicality during a home invasion (although his notions of firearms safety may be questionable).

Shotguns are so effective for home defense that the simple sound of racking a shell into the chamber is enough to send all but the most determined intruders running for the hills. It takes an incredibly brave (or stupid) individual to stare down the barrel of a 12 gauge and keep coming.

Why Use a Shotgun for Home Protection?

Many homeowners choose a handgun, carbine, or even their favorite hunting rifle as their primary means of protecting their home. However, a shotgun has several advantages over these other weapons.

Most classes that address self-defense shooting emphasize the importance of rapid, accurate shooting for effective and reliable threat elimination. Getting multiple rounds on target is critical, because a single shot may not stop a determined attacker. Many violent criminals even continue to attack after they’ve been shot multiple times. Therefore, quickly firing several rounds from your self-defense handgun increases your chances of stopping that threat. A shotgun achieves the same effect with one pull of the trigger. This allows the homeowner to end a fight more quickly than may be possible with any other weapon. 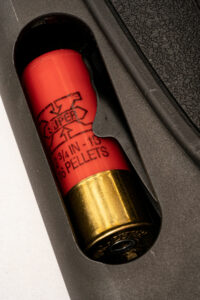 Shotguns are highly versatile weapons. A 12 gauge shotgun has the capacity to shoot ammo that simultaneously fires thousands of tiny pellets or a single massive expanding projectile. It can also shoot everything in between.

This vast selection of shotgun ammunition can leave homeowners confused about what to feed their self-defense weapon. The information provided here should help cut through the confusion and help you make informed decisions concerning shotgun loads for home defense.

Before we get into specific ammo recommendations, let’s take a quick look at the basic types of shotgun ammunition.

Birdshot has the smallest pellet sizes but also has the advantage of numbers. Although birdshot is tiny compared to buckshot, each shotshell contains hundreds or even thousands of tiny projectiles.

Because the projectiles are so tiny, they lack the lethality of buckshot. Their small size keeps them from packing the same punch as a heavier shot load. Tiny shot also lacks the weight and energy needed for deep penetration. Instead, birdshot leaves a peppering of surface wounds that can be painful but don’t typically inflict much internal damage. This doesn’t mean birdshot can’t be fatal, especially at close range. It just means the odds aren’t particularly in your favor.

Buckshot gets its name from the animals it is commonly used to kill. Often used to harvest whitetail bucks in areas that restrict rifle hunting, buckshot is devastating when used at close range on these thin-skinned animals.

Interestingly, human body structure doesn’t differ much from the body structure of a typical whitetail buck. The average adult male has an overall weight, chest circumference, and depth to vital organs eerily similar to the average whitetail buck. Their hearts are also virtually identical in weight and structure. While it might seem macabre to compare humans to game animals, these comparisons are invaluable when it comes to selecting ammunition for personal protection. If a load is lethal on whitetails, logic follows it will also be effective on dangerous humans. 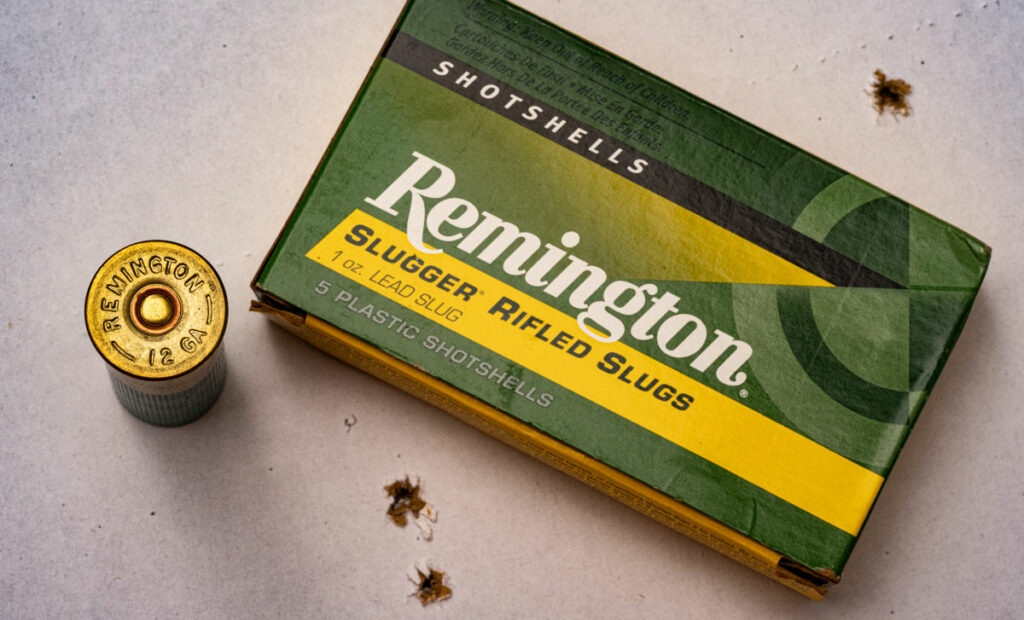 A shotgun slug contains a single metal projectile. These massive projectiles are heavy, penetrate deeply, and deliver serious internal damage. They are also more accurate that buckshot or birdshot for long-distance shooting. Both deer hunters and police officers switch to slugs when shooting long-range targets.

On top of their increased range, shotgun slugs also deliver deep penetration. This is another reason police officers may switch to tactical slugs when engaging dangerous criminals. Their penetrative qualities make them perfect for gun fights that take place in or around vehicles. A standard slug can punch right through a car door without breaking a sweat.

Although the size and weight of a shotgun slug make it more powerful and deadly, they aren’t usually recommended for home defense. Most intruders are engaged at close range, usually between 7 and 15 feet (or the length of a typical hallway). If you need a slug to reach out and touch a criminal, he is probably far enough away not to pose any real danger.

Slugs can also be a major liability in a home defense situation. A slug is going to plow through a lot of stuff before it stops. This includes drywall, wall studs, doors, furniture, and bodies.  A slug can smash through an exterior wall and still have enough kinetic energy to kill someone on the other side. Shooting a slug inside of your home could potentially put the whole neighborhood in danger. 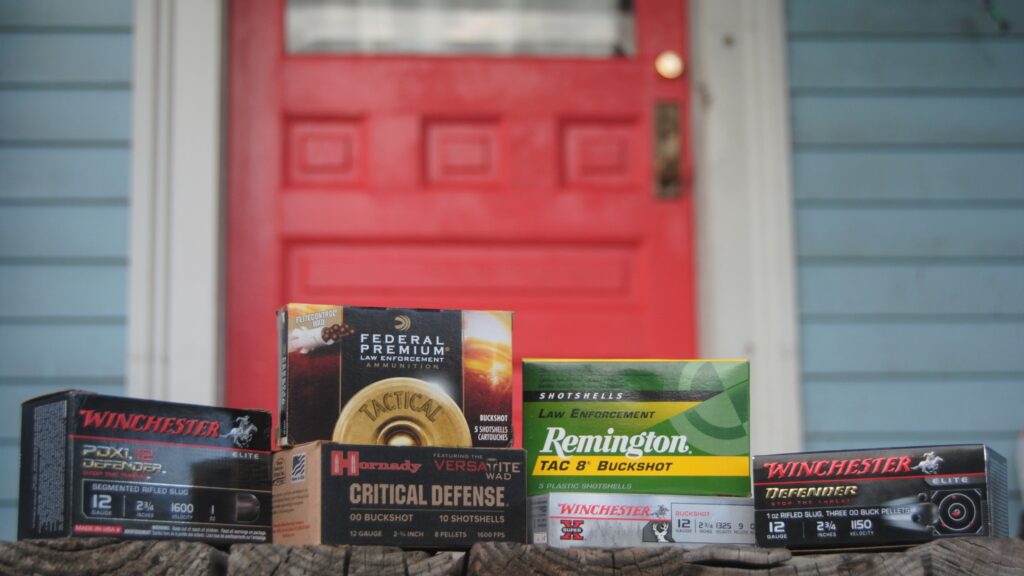 There’s nothing wrong with using plain old buckshot for home defense. Given the statistics of engagement at distances less than 15 feet, any shotgun ammo that reliably cycles through your weapon will be effective.

There is no shame in using a simple, no-frills 00 Buckshot load. 00 Buck has long been the king of home defense shotgun ammunition. Even the United States military and most police departments use simple 00 buckshot, although any buckshot from #4 to 000 will get the job done.

As a side note, I load my own home defense shotgun (a Remington 887) with plain old Winchester Super-X 00 Buck. For me, it seems practical to use the same ammo I use for deer hunting to protect my home.

However, when it comes to shotgun ammunition for home defense, there are good options, and there are better options. Modern advancements in ammunition design have produced some exciting shotgun loads specifically engineered for effective home defense, and these high-performance loads really deliver.

One of the best features of purchasing defensive shotgun ammunition is their reduced recoil. Most shooters agree the one major drawback to using a shotgun is they produce a lot of recoil, especially when loaded with buckshot. That “kick” can be difficult to handle, especially in a stressful situation like a home invasion. Recoil can also be a serious issue for women and younger residents who find themselves face to face with a dangerous intruder, particularly if they need to fire more than one round.

The standard 12 gauge, 2 ¾ inch shotshell loaded with 00 Buck is designed to kill deer at approximately 50 yards. Even if you live in a mansion, you won’t need your home defense ammunition to cover that kind of distance. Again, the typical range for self-defense is 7 to 15 feet, and reduced recoil shotgun ammunition delivers plenty of power for those close quarters encounters.

Shotgun ammunition optimized for home defense may also be designed to produce tighter shot patterns than hunting ammunition. When engaging a criminal within the walls of your home, you don’t want any pellets to miss the target, especially when you have loved ones in the house. Therefore, shot pattern density becomes highly important to prevent stray pellets causing unwanted damage to your home or loved ones. 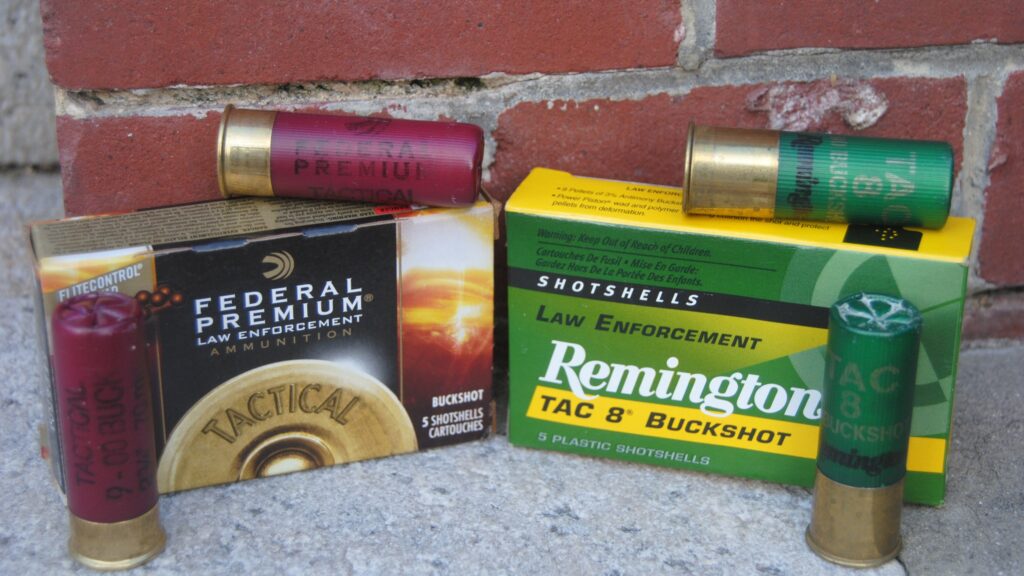 Federal Premium offers several shotgun loads perfect for home defense. Their 12 gauge Tactical Law Enforcement and Personal Defense shotgun loads are both designed for reduced recoil. Leaving the muzzle at only 1145 feet per second, these loads are designed to deliver tight shot patterns and optimal penetration. They achieve this through a unique rear-braking FLITECONTROL wad and copper plated pellets.

Hornady Critical Defense 00 Buckshot is another great home defense option. With an innovative Versatite wad, these shotgun loads deliver tight shot patterns. They also leave the muzzle at a blistering 1600 feet per second, so they hit the target with some serious power. Additionally, Hornady engineers their Critical Defense shotshells to function reliably in both pump and semiautomatic shotguns.

One of the most exciting developments in home defense ammunition is Winchester’s PDX1 Defender shotgun loads.

The Winchester PDX1 Defender line has several innovative solutions for home defense. The most intriguing is their pre-segmented one-ounce rifled slug. Like most shotgun slugs, the segmented PDX1 Defender punches through barriers with little effort. However, once the projectile hits a softer target (like flesh), the slug breaks into three separate pieces. This maximizes internal damage but also eliminates the threat of over-penetration. This makes these segmented slugs them much safer to use on a home invader standing in your front hallway.

The Winchester PDX-1 Defender line also features a slug and buck combo. Each shotshell is loaded with a 1 ounce rifled slug AND three 00 Buck pellets. Designed to compensate for aiming errors that commonly occur when inexperienced shooters are under duress, this combination load makes it possible to miss the target with the slug but still make impact with one of the 00 pellets. However, this load doesn’t eliminate the over-penetration issues of the standard rifled slug. If you’re worried about what might be on the other side of the wall behind your target, this isn’t the load for you. 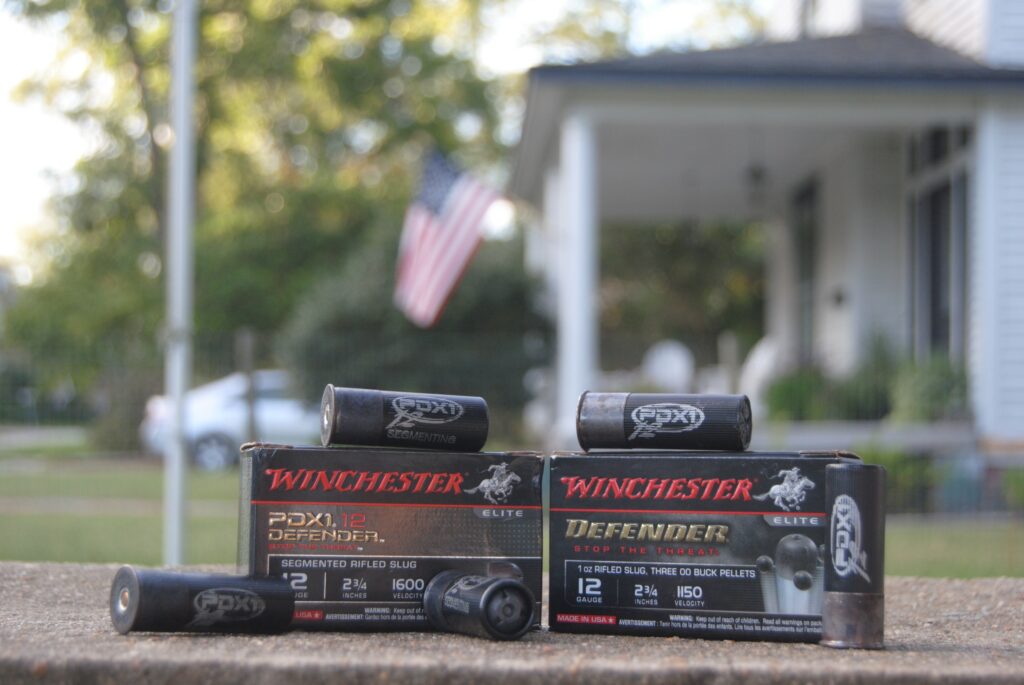 Nothing beats a properly loaded shotgun when it comes to most home defense situations. However, a shotgun, no matter how innovative the ammo its loaded with, is not a magic wand. In most instances, you can’t just wave your shotgun and make the bad guys go away. If you plan to use a shotgun to defend your home, you need to practice with it.

Proficiency with your weapon is your biggest asset. It can take some time and effort to learn how to handle a shotgun smoothly and confidently (especially if it is a pump action). You will be handling that weapon under duress, when your life and the lives of your loved ones are in imminent danger. You need to be able to fire your home defense shotgun without putting any conscious effort into it, because your brain will be busy dealing with the adrenaline dump of a high stress situation.

The only way to achieve that level of proficiency is to practice. I can’t think of a better reason to put lead downrange.