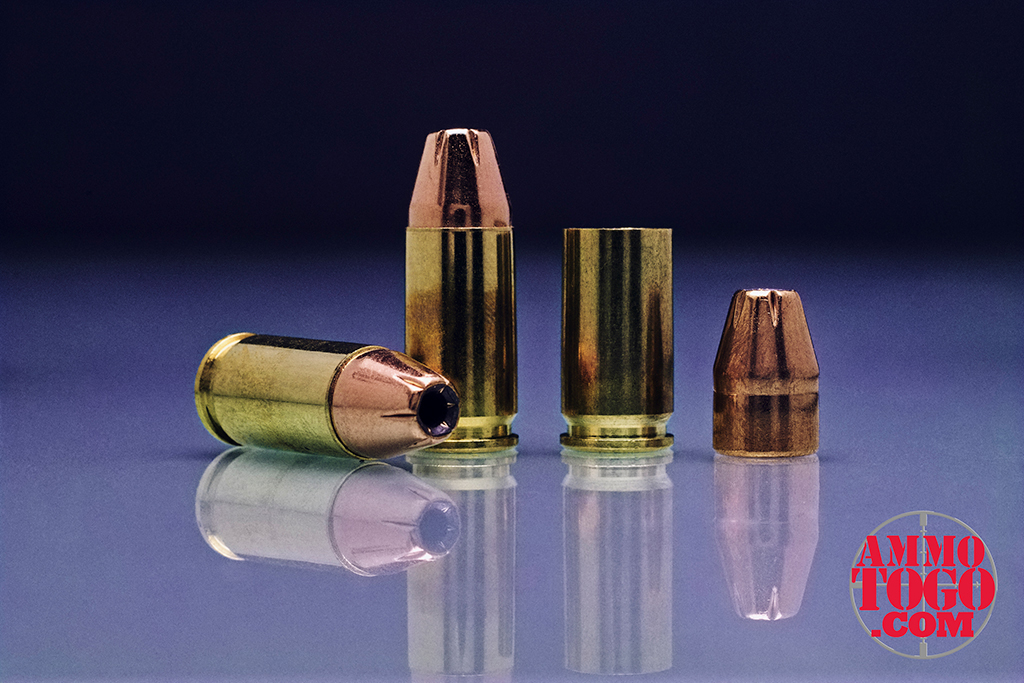 Jacketed hollow points are some of the most common bullets used in self-defense ammo. But what makes a “JHP” bullet different from cheaper full metal jacket choices and why is it more trusted for defense?

The jacketed hollow point (JHP) is one of the most common types of bullets available on the market. Designed for expansion at the target, these rounds are intended to stop threats and drop game animals effectively.

Whether you are an experienced hunter, a concealed-carry permit holder, or a target-shooting enthusiast, you need to understand the benefits and drawbacks of these common bullets.

A hollow point (including jacketed and unjacketed) is essentially a bullet that has a pit or bowl in the nose. This pit is intended to cause expansion when the bullet strikes a target. Hollow point bullets come in a large variety of sizes, cartridges, and shapes, but the overall feature is this pit at the nose.

However, jacketed hollow points have another defining feature: the jacket, which is a hard copper exterior casing that covers the soft interior lead core of the bullet. The jacket brings two distinct advantages over unjacketed cartridges.

First, is cycling. In a semi-automatic firearm, lead bullets sometimes create feeding issues and jams when the cartridge is cycled from the magazine to the chamber. However, with a jacket, the feeding process is smoother and more consistent. Jacketed hollow points do not eliminate jams, but they do reduce them.

The other advantage of the jacket is less fouling. Fouling is a residue left in the barrel when the bullet is ejected. Lead is much softer than copper and leaves more fouling. So, having a copper jacket will delivers better accuracy and performance over multiple shots while maintaining the quality of a barrel.

Firing a projectile that expands at the target had been experimented with for years, but it wasn’t until roughly the late 19th century that manufacturers marketed hollow points to the general public. It’s believed that the initial goal of the hollow point design was actually to increase speed.

To reduce weight, manufacturers took out some of the bullet’s mass at the center of the nose. During testing, they discovered that speed gain was minimal at best. They also noticed the bullets provided greater expansion and a new purpose for the design was born.

Up to this point in history, we’re talking about the basic hollow point, without the addition of jacketing. It’s believed that the jacketed hollow point was invented in India during the late 19th century. At the Dum Dum Arsenal, a British captain developed a mull-metal jacket round with the jacket cut away at the nose. This exposed the lead core. The bullet became known as the “dum-dum,” an early precursor to the jacketed hollow point that we know today.

You have to know how these perform both internally and externally to decide whether their use is right for your purposes.

If you are concerned with bullet speed, jacketed hollow points will make little difference. Overall velocity, both from the muzzle and down range, appears to be unchanged. There also appears to be no difference in the amount of power that is delivered when a bullet lands at target. However, there is a change in how the power is used. (See Terminal Performance below.)

As an example, 115-grain 9mm Luger rounds from Federal Ammunition in jacketed hollow points and full metal jacket (American Eagle) have the exact same ratings for velocity and energy from start to finish.

The accuracy of a jacketed hollow point verse a full metal jacket round is a complex debate with no clear answer. It depends on so many factors, such as the cartridge, the firearm, bullet weight, and wind direction.

It’s a reasonable assumption that full metal jacket and soft point rounds would be more accurate, as the bullet is more streamlined; however, some believe that JHP rounds are more accurate because the bullets have better balance. Like most aspects of firearms, you need to try multiple options to see which is right for you.

Terminal performance is where jacketed hollow points have a distinct, undoubted advantage.

The expanding nature of the bullet creates more lethal and effective wounds. This allows users to stop threats or drop game with greater effectiveness. As the bullet expands, it also slows and stops in the target, which makes it less dangerous for others. With full metal jacket rounds, there is a chance that the bullet could travel through the target (or a barrier such as drywall) and harm another person.

For more on terminal performance, be sure to check out our massive self-defense ammo testing project.

Are there Disadvantages of JHP Ammunition?

Like everything in firearms, there is bound to be a disadvantage, but the downsides of jacketed hollow points are limited. From a performance perspective, the only significant downside is the higher potential for jamming compared to full metal jackets. However, JHP are considered less likely to jam compared to soft points and unjacketed hollow points.

The other disadvantage could be price, depending on what you buy and where you purchase ammunition.

However, there remain two clear uses for this type of round…

For hunting, almost all outdoor enthusiasts strongly recommend jacked hollow points (or hollow points in general.) They are not only better for harvesting game, they are more humane.

What About Military Use of Hollow Points?

It’s also interesting to note that the Hague Convention prohibits JHP use. Essentially, the hollow point design is too effective at killing targets. That’s why NATO forces currently use only full metal jacket or ball ammunition. When this ammo is used, it will typically wound a soldier but not kill with the same efficacy as JHP.

The other purpose, and one that is most discussed, is for personal protection. Not only will a hollow point deliver a more effective shot to the target, many consider them safer to the general public because there is less chance of over-penetration. Hollow points do not, in most cases, exit the target, and even when one does, it has significantly slowed.

There is also less chance that a hollow point could go through drywall and other materials, which is a possibility with full metal jacket rounds. So, in the event you miss your target, the odds of hurting someone that is a bystander in another room and not a threat in a self-defense situation goes down with the expanding projectile.

As a gun owner it’s your responsibility to make wise decisions with your firearms. We hope you now have the right information on when jacketed hollow point bullets are an appropriate choice.

What is a Wadcutter?