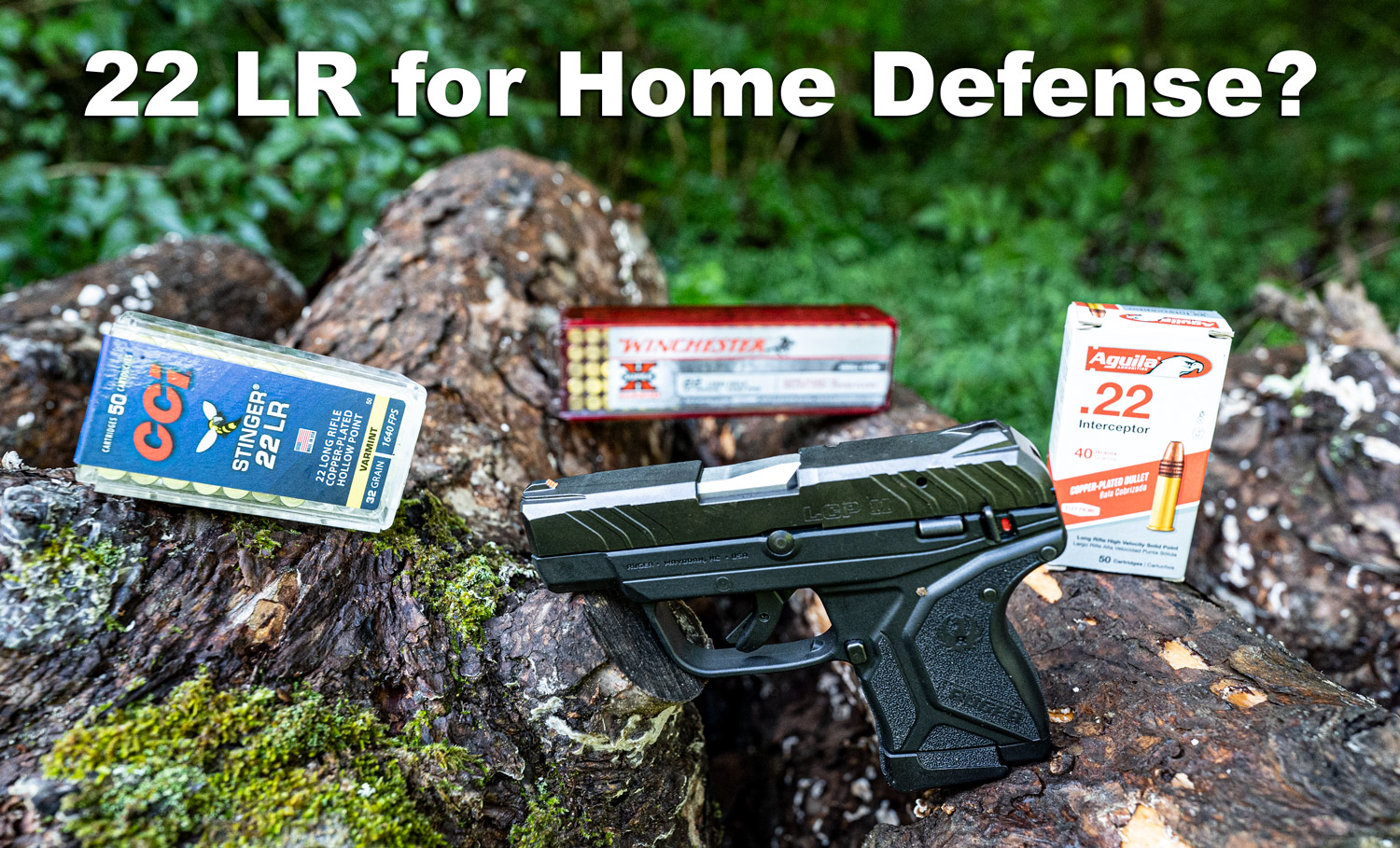 An examination of the use of 22lr for home defense? Is the world’s most popular cartridge “enough” to be a threat stopper when it’s time to protect your family?

There is a plethora of .22 rimfire pistols on the market with the same look as popular centerfire concealed carry handguns. There’s Smith & Wesson’s M&P 22 Compact, the Taurus TX22, Ruger Lite Rack LCP II, and the Glock 44, just to name a few.

Don’t be fooled by the prolific number of sporty handguns chambered in .22 LR. Rimfire pistols are NOT popular options for home defense or concealed carry. In fact, most self-defense shooting experts doggedly denounce them.

2020 saw a surge in gun sales and an even bigger surge in first-time gun ownership. With few options in gun store showcases, customers snatched up what was left. What they ended up with was often one of these small, .22 LR handguns.

Many gun owners, especially those with limited knowledge and experience, seem to believe “a gun is a gun” without putting much thought into what they actually need from their firearm.

Is it true that any gun is better than no gun?

Can a rimfire handgun fend off bad guys in a life-or-death situation?

Let’s take a closer look at the advantages and disadvantages of .22 LR for home defense.

The Advantages of 22LR for Home Defense

Despite the loud voices of the naysayers, .22 LR handguns do have some advantages.

.22 long rifle is hands down the most popular cartridge ever produced. Not only is .22 LR ammo readily available (even during much of the 2020 ammo famine), it is insanely affordable. In fact, it is probably the low cost of .22 LR ammunition that continues to drive this cartridge’s popularity.

The super-cheap cost per round means shooters can get in a lot of training for very little money – which is good because you’ll need mad shooting skills should you ever need to use .22 LR in a real life self-defense situation.

The .22 LR’s real claim to fame is its ultra mild recoil. There’s a reason this mild-mannered cartridge is often used to introduce youngsters to shooting. Senior citizens, the physically disabled, and others with severely limited upper body strength can all handle a .22 LR easier than any other handgun.

Even when shot from a lightweight, subcompact firearm, .22 LR is easy to handle. Quick, accurate follow-up shots are easy, even for inexperienced shooters in high-adrenaline scenarios.

That mild recoil also allows for faster shooting. Because there is almost no recovery time between shots, even an experienced shooter can fire 8-10 rounds of .22 LR significantly faster than 8-10 rounds of 9mm. And rounds each round fired after that first shot is more likely to hit your target.

In self-defense scenarios, getting multiple rounds on target quickly is critical to stopping a threat.

In addition to its mild recoil, .22 LR is also ninja quiet, especially when paired with a suppressor. Many self-defense situations and most home defense encounters happen indoors, making the cartridge’s near-silent shooting a major advantage.

If you’re looking for a do-it-all cartridge, .22 LR comes close. You can use it to control pests, hunt small game, plink soda cans, and punch paper targets. If you have a .22 rifle and a .22 handgun, your firearms can share ammo, which simplifies both shopping and storage.

While anti-gun activists and politicians often target scarier firearms (like the AR-15), rimfire weapons typically fly well under their radar. Even when governing bodies attempt to limit magazine capacity, rimfires usually get a free pass.

If you live in an area with severe firearm restrictions, a .22 rimfire could be a way to get around some of those limitations.

Disadvantages of 22LR for Home Defense

When it comes to personal defense, the .22 LR cartridge is certainly more competent than pepper spray or a baseball bat. However, it is still the least effective cartridge in the home defense conversation. Here are a few of its major shortcomings.

One of the oldest designs still in use, rimfire cartridges, like the .22 long rifle, haven’t changed much since they were first introduced in the mid 1880s. Although there have been advances in ammunition manufacturing processes, the basic rimfire design remains the same.

Small gaps in the priming compound can prevent proper ignition. Because of this design, rimfire ammunition is inherently less reliable than centerfire ammo, which has self-contained primers built for reliability.

Duds and misfires when shooting rimfire cartridges are common. A jam or failure to fire is annoying when plinking soda cans, but one of these mishaps could cost you your life in a self-defense situation. 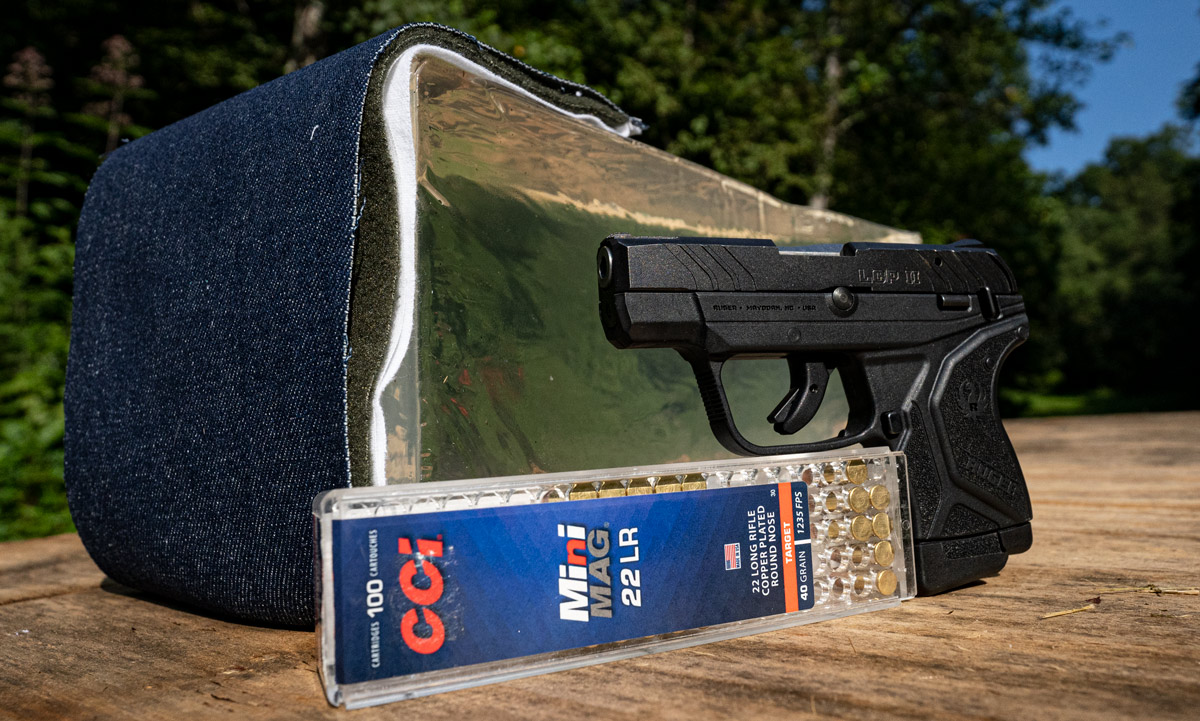 When you stand a .22 LR cartridge next to any popular self-defense cartridge, it’s easy to see why this little guy gets picked on. In comparison, 9mm, .45 ACP, and even .380 Auto completely dominate the rimfire competition. When it comes to terminal performance, even the smallest centerfire cartridges will hit harder, penetrate deeper, and carve nastier wound channels than .22 LR.

If you do need to use .22 LR for defensive shooting, its meager terminal performance means shot placement, both initial and follow-up, is absolutely crucial.

But just how bad is the terminal performance? We set up some tests at the range to find out.

Using Clear Ballistics gelatin, we set up a test similar to what the Federal Bureau of Investigation uses to test the efficacy of handgun ammo. First, we fired a handful of CCI Mini-Mag 22 long rifle lead nose rounds into the ballistic gelatin.

Ideally, we would want to see 12 to 18 inches of penetration into the gel. Also, we want the bullet to open up when it hits the gelatin. This provides a large wound channel and hopefully, a decent amount of blood loss. That blood loss can contribute to neutralizing a threat. 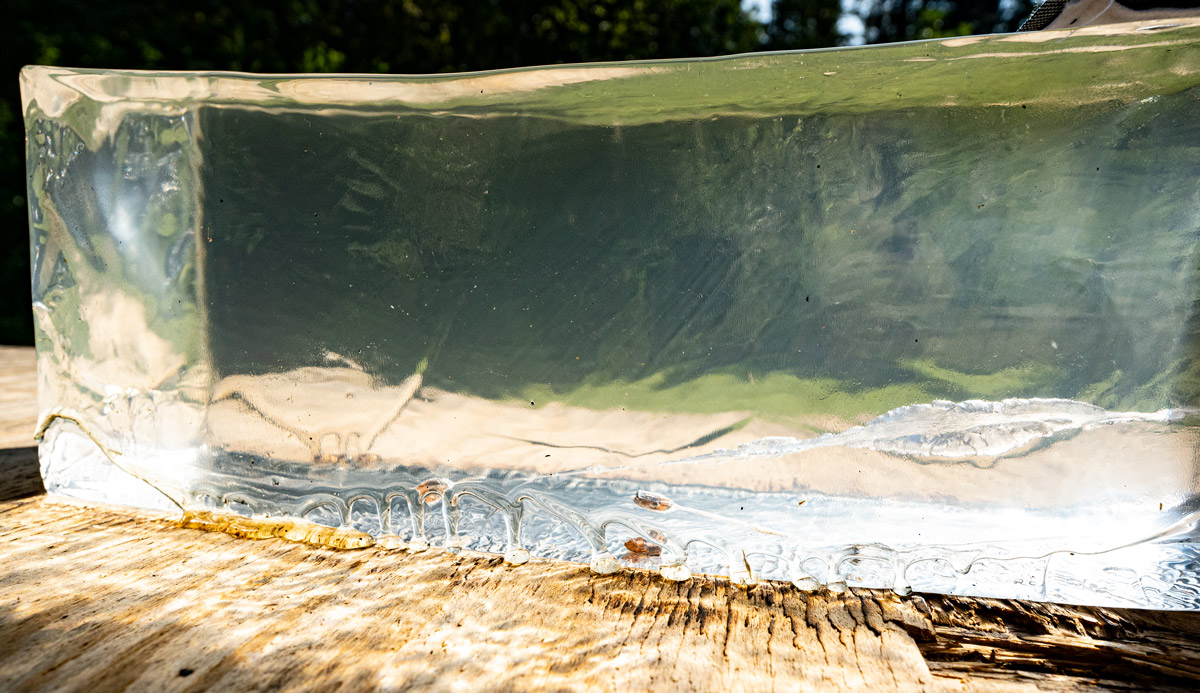 You can see in the photo above, these Mini-Mag rounds made their way about half way through the 16″ block of gelatin. It’s not uncommon to see small centerfire pistol rounds, like 380 ACP and 9mm easily go 14-20″ into gelatin under similar circumstances.

But what if we tested 22LR ammo that’s more conducive to hunting with a bullet designed to open up? Would we see about the same penetration and possibly a more impressive wound channel? 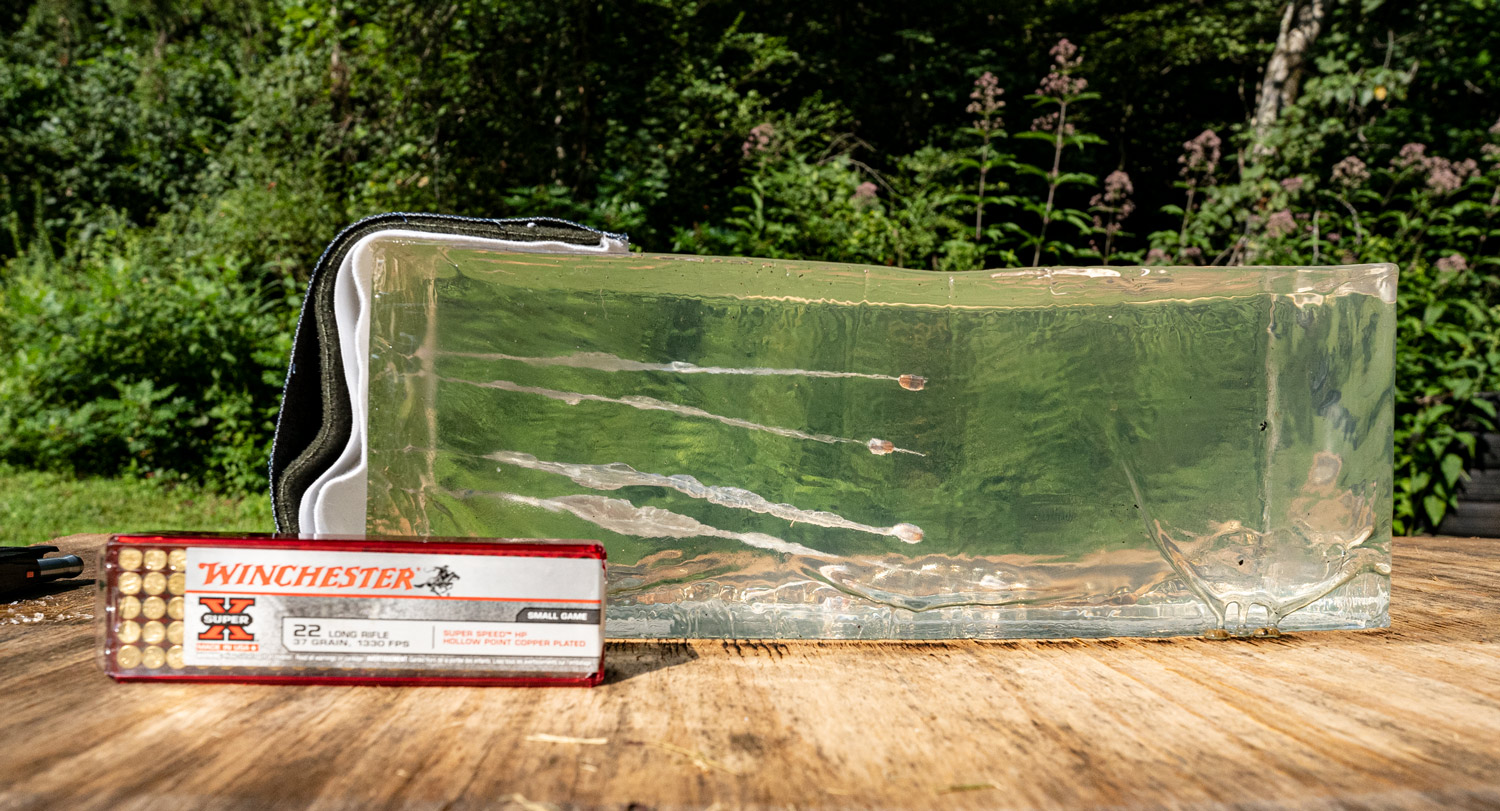 For this test, we looked to Winchester Super-X with a hollow point projectile.

The results really weren’t all that different from the Mini-Mag we fired initially. We saw a limited amount of penetration (about 8″) and the wound channel was about as wide as a pencil.

There did appear to be considerable tumbling. This means the bullets didn’t travel straight through, instead they “tumbled” around. Look at this shot from above the gel block showing one bullet that did at least one complete 180-degree turnaround. (It’s facing the direction the bullet traveled into the gel.) 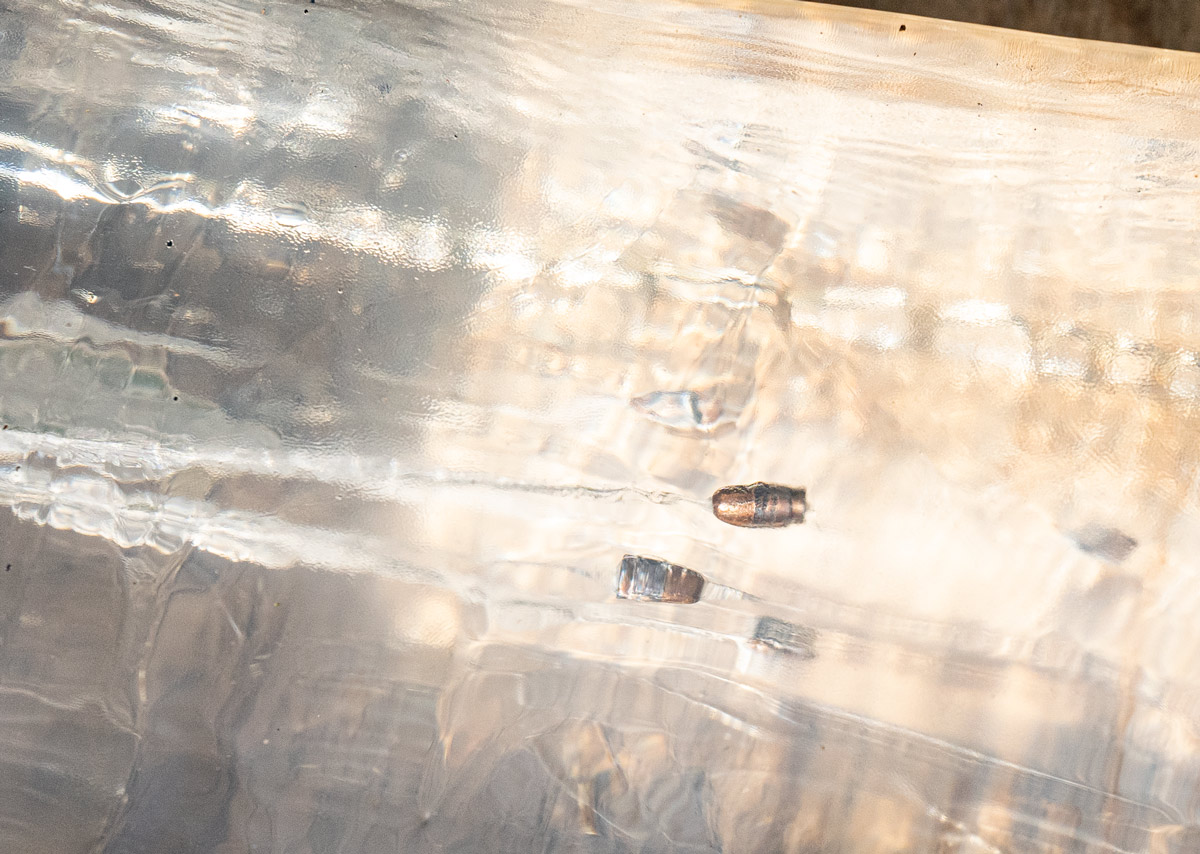 So, what is our takeaway here?

Well, if you’re a believer that the FBI knows what to look for in ammo that stops a human threat — 22 LR doesn’t meet their standards so it likely won’t meet your standards either.

Guns Are Scary, But…

There are bad guys who will disengage the minute they see a firearm, whether that firearm is a full-size .45 or a micro .22, it doesn’t matter. To them, guns=scary. Which is probably a healthy attitude for people who want to stay alive.

However, an attacker dead set on violence will keep coming regardless. In those situations, the amount of internal damage your defensive loads can cause, the better chance you have of stopping them. 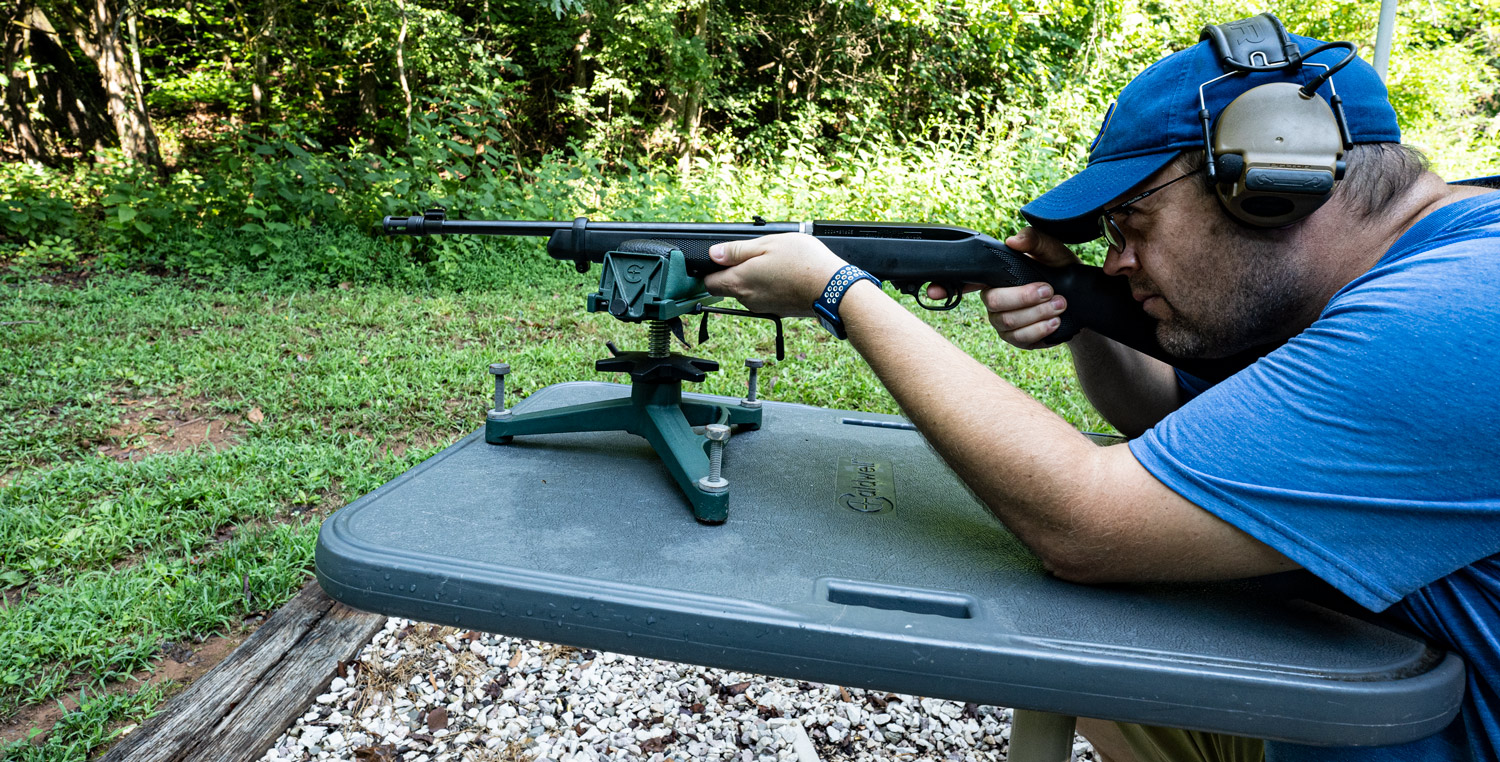 The .22 LR cartridge was designed to shove lightweight projectiles from a 16- to 20-inch barrel. This should be a no-brainer considering “long rifle” is right there in the name.

Those tiny, little bullets lose a ton of energy when fired through the short, 4-inch barrel of a handgun. Also, when fired at slower handgun velocities, some hollow points fail to expand on impact.

That’s not to say that a .22 bullet fired from a pistol can’t be lethal. It absolutely can. It may take a little more effort, through multiple rounds and careful shot placement, to make that happen. You will see slightly better terminal performance if you fire .22 LR with a rifle than a pistol, in most cases.

More Rounds in the Air

In the list of advantages above, we mentioned that the .22 LR’s mild recoil makes it easier to fire multiple rounds with speed and accuracy. While this is definitely true, firing a large number of times to neutralize a threat can be dangerous. The longer it takes to stop the confrontation, the more opportunity an attacker has to hurt you.

Also, the more rounds that leave the muzzle of your weapon, the more chance there is of one missing your target. Rounds that don’t hit your target end up in walls, windows, and potentially innocent bystanders.

Ammo technology has advanced by leaps and bounds over the last several decades, even for aged cartridges like the .22 LR.

Ammo like CCI’s Velocitor and Mini-Mag provide decent penetration and expansion compared to other options. Other solid performers are Winchester Varmint HC and Remington Viper TC. Loads like these can boost the potency of the .22 LR.

Is it a no-brainer to rely on .22LR for home defense? Absolutely not.

Does the caliber test as well as larger centerfire calibers using metrics most of us rely on to determine effectiveness? No.

In the world of defensive shooting, we often get so caught up in the “which gun is best” debate that we forget all the other important elements of self-defense.

As Colonel Jeff Cooper once said, “Owning a handgun doesn’t make you armed any more than owning a guitar makes you a musician.”

In other words, there’s more to self-defense than the gun. There’s a big difference in toting a gun and knowing how to properly employ it for personal protection.

We can put so much emphasis on what firearm we carry, that we forget more important things, like situational awareness and avoiding being a soft target. We even tend to forget things like basic shooting skills. Honestly, it doesn’t matter what firearm you have tucked in your waistband if you don’t know how to properly use it in a dynamic, adrenaline-pumping, violent encounter.

Your firearm isn’t a magic talisman that will protect you from all things bad. Hit the range, run through dry fire drills, and work on your self-defense mindset.

You also shouldn’t neglect simple hand-to-hand skills. Plenty of gunfights turn into fist fights. Plus, shooting a “bad guy” doesn’t guarantee you won’t end up throwing hands. That’s true no matter what cartridge you have in your magazine.

Getting a CCW – Steps to a Concealed Carry License