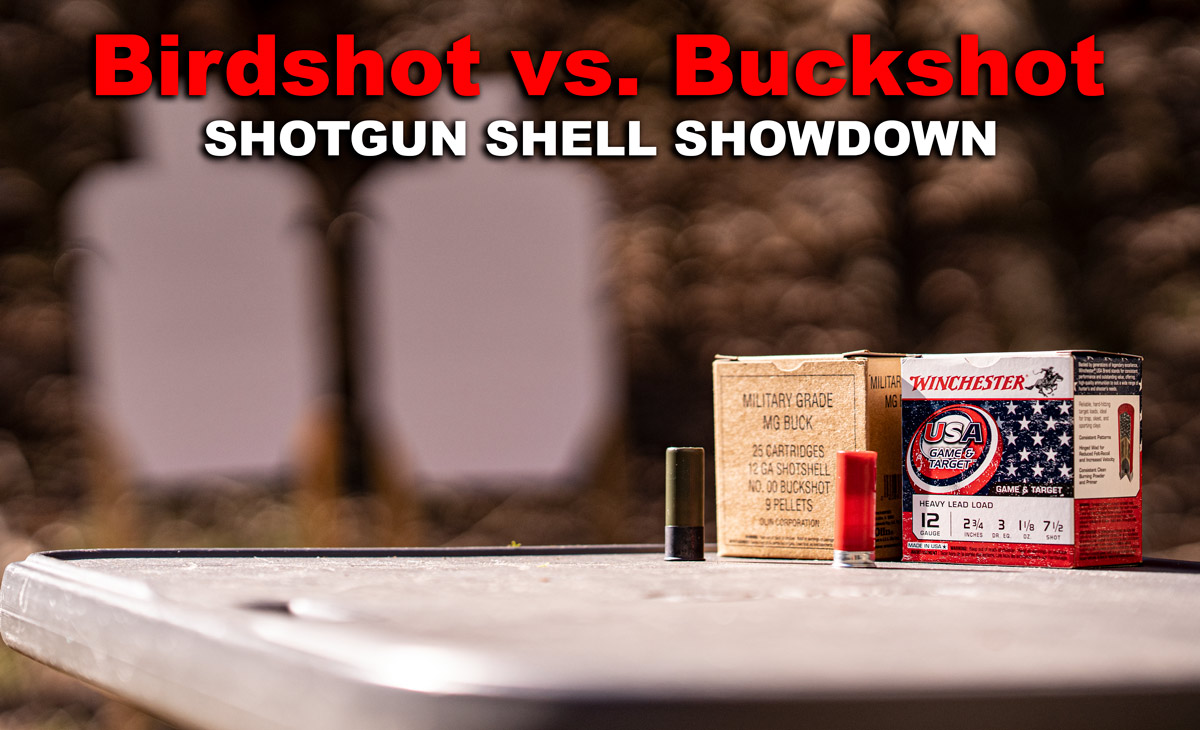 We examine the differences between two popular shotgun loads – buckshot vs. birdshot. What makes for a better choice for different uses and what should you rely upon for home defense?

When it comes to home defense, some people swear by the shotgun. Handguns, without a doubt, have the potential to be an extremely effective home-defense weapon, and rifles have their place in this conversation as well. But a significant portion of the firearm-owning community believes that the shotgun is the best for home defense. So, if you’ve got the firearm picked out, the next question is, what ammo? In the birdshot vs. buckshot debate, there are a few things you should consider.

We certainly can’t settle the debate as whole. But, we can shed some light on the issue of ammunition choice for your home-defense shotgun. In this case, we’d like to look at the difference between birdshot and buckshot so you can choose one or the other for the protection of yourself, your property, and your family. 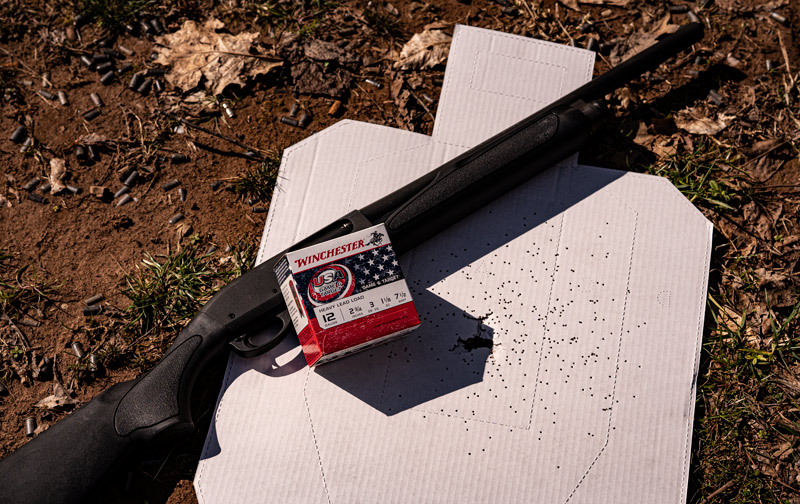 Birdshot is the smaller of the two when it comes to pellet size. Made for dropping birds of various sizes at short, medium, and (in some cases) long distances, these shells have become the trusted option for pheasant, quail, duck, goose, and turkey. Because the pellets in these shells are smaller, you can fit more total pellets into the shell, which increases your chances of effectively hitting the target.

When purchasing birdshot, you will find that the larger the number, the smaller the pellets. This also means larger numbers have more pellets per shell. (For example, a Number 10 (No. 10) shot is smaller than No. 5 shot; No. 5 is smaller than No. 2 shot.) Generally, manufacturers designate and market these for the appropriate game, which helps you make a decision when shopping for ammunition.

Although the name implies they are only for harvesting feathered game, most birdshot can be used for a variety of small-game animals, including squirrels and rabbits. Also, loads meant for turkey and geese would do significant damage to just about any animal. 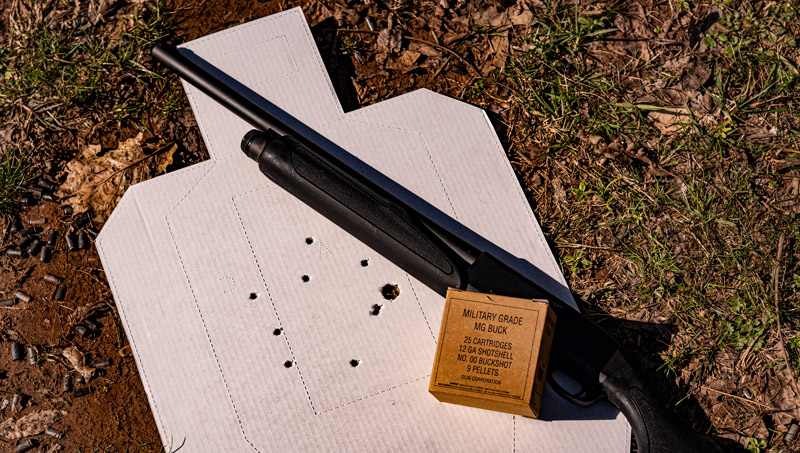 Buckshot loads large metal pellets into the shell, giving greater weight and force to each pellet, although there are fewer pellets for every shell. When you fire a buckshot load, the pellets move outward from each other, just like birdshot, but the pattern tends to be tighter (depending on the shotgun barrel and other factors). With heavier pellets, the force placed into the target will be greater. This is why we use buckshot while hunting larger animals, especially whitetail deer.

You could, of course, use buckshot to kill a duck, pheasant, or squirrel, but you would significantly destroy the animal; leaving little meat or pelt to harvest. This would not only be wasteful, it would be, in most cases, unethical hunting.

Buckshot can be referred to by numbers or letters. Most buckshot, however, uses the #0 or “aught” designations. #0 (called “single aught”) or larger #00 (“double aught”) are typical buckshot sizes. Some want smaller buckshot, which is possible. The next smallest after #0 is #1 buckshot; once again, as the number gets larger, the shot gets smaller. (#2 is smaller than #1, etc.)

These are two shotgun ammunition choices that have particular purposes in the hunting fields, wood, and prairies of America. But what about the home?

In this case, there are two important factors that you need to consider. These factors are different in both load types, and they will greatly impact how you select personal-defense shotgun ammunition.

Penetration (Both Into the Target, and Through Barriers)

In a critical situation like a home invasion, few factors matter more than overall penetration into a target. If there is a threat to your home and family, you want strong, deep, effective penetration, allowing you to stop the threat immediately.

In this case, there is little question that buckshot will certainly deliver more penetration into the target. Buckshot, with larger, heavier pellets, will inevitably strike the target with greater momentum, penetrating deeper into the threat and increasing the chances of an immediate stop to a critical situation.

But there is also the issue of over penetration. With buckshot, there is a significant chance that the larger pellets could penetrate through walls, creating a safety issue for your family or other bystanders.

Birdshot typically won’t penetrate through barriers like drywall as easily. If it does, it likely won’t come flying through the barrier with dangerous momentum. 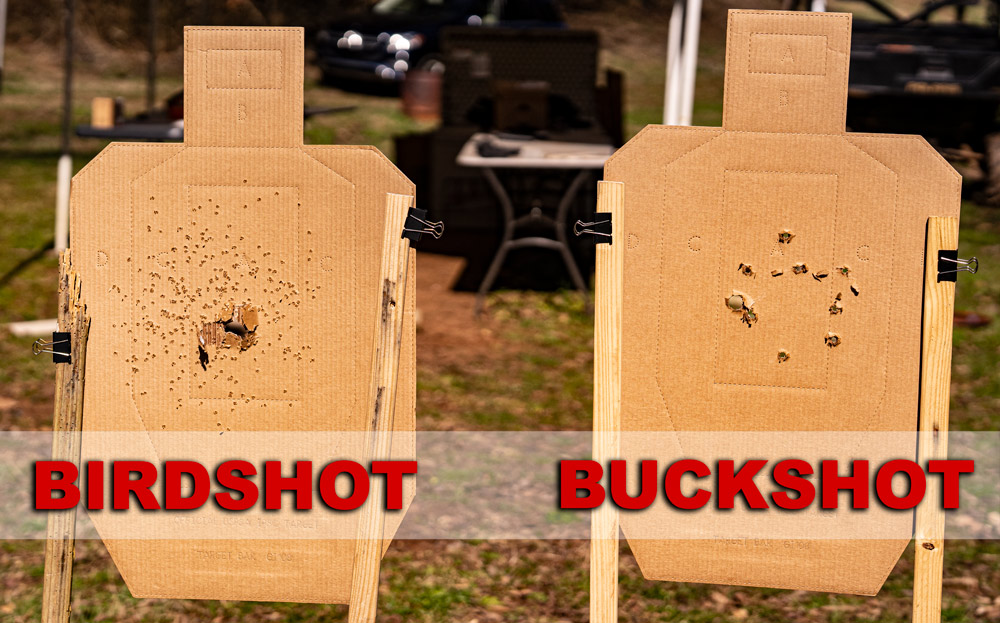 The other component of buckshot vs birdshot for home defense is the overall spread of the pellets. With birdshot you will have a larger spread of pellets with more pellets striking the targeted area. At ten yards, depending on the shotgun barrel, a birdshot loan can have an overall pattern spread over a foot in diameter. As the distance increases, so too does the spread. Buckshot will spread out as well, but the larger pellets generally keep a tighter pattern.

As pellets spread out in their pattern, the energy they disperse also spreads. Instead of delivering a sizable amount of energy to a small space, a wide pattern delivers its energy load to a wider area, which can reduce the lethal potential of the shot.

Most Recommend Buckshot Over Birdshot

In general, you will find that most people, including writers from the National Rifle Association, recommend using buckshot for home defense over birdshot. While there is the potential for over-penetration, which is rarely a concern for birdshot, the heavier pellets, delivered into a tighter space, generally result in a more effective home-defense round. Since there is no National Shotgun Association (and we’ve done the field work to confirm) we tend to agree with the NRA’s opinion.

Birdshot, however, can certainly be lethal, and if it strikes a wall at close range, it can over penetrate. It seems unlikely that a home invader would want to continue their efforts after being struck by a load of birdshot, especially at a distance inside ten yards, which is how most indoor situations would occur.

Consider Shells Made for Home Defense 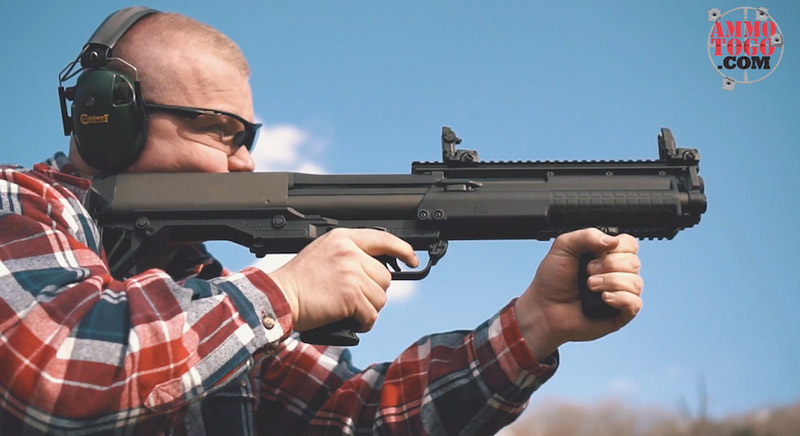 All of this debating and analyzing may seem unnecessary when you consider the fact that multiple manufacturers make shotgun rounds designed specifically for personal defense. The vast majority of shotgun loads are either hunting or trap-shooting shells, but there are many 12 gauge options made specifically for home defense. When browsing these products, however, you’ll notice that they usually pack buckshot or slugs, not birdshot.

Hornady’s 12-gauge CRITICAL DEFENSE, for example, packs eight #00 buckshot. Other shells may pack a slug, or a slug/buckshot combination. To our knowledge, no shells marketed specifically for defense pack birdshot.

No matter which way you wind up in the birdshot/buckshot debate, you’re on the right path. Both the 12 and 20 gauge shotgun make for a wonderful tool for home defense. As with most things guns and self-defense, the most important thing is to make sure you’re competent with your firearm. That means take the time to get comfortable with it and spend some time at a shooting range.