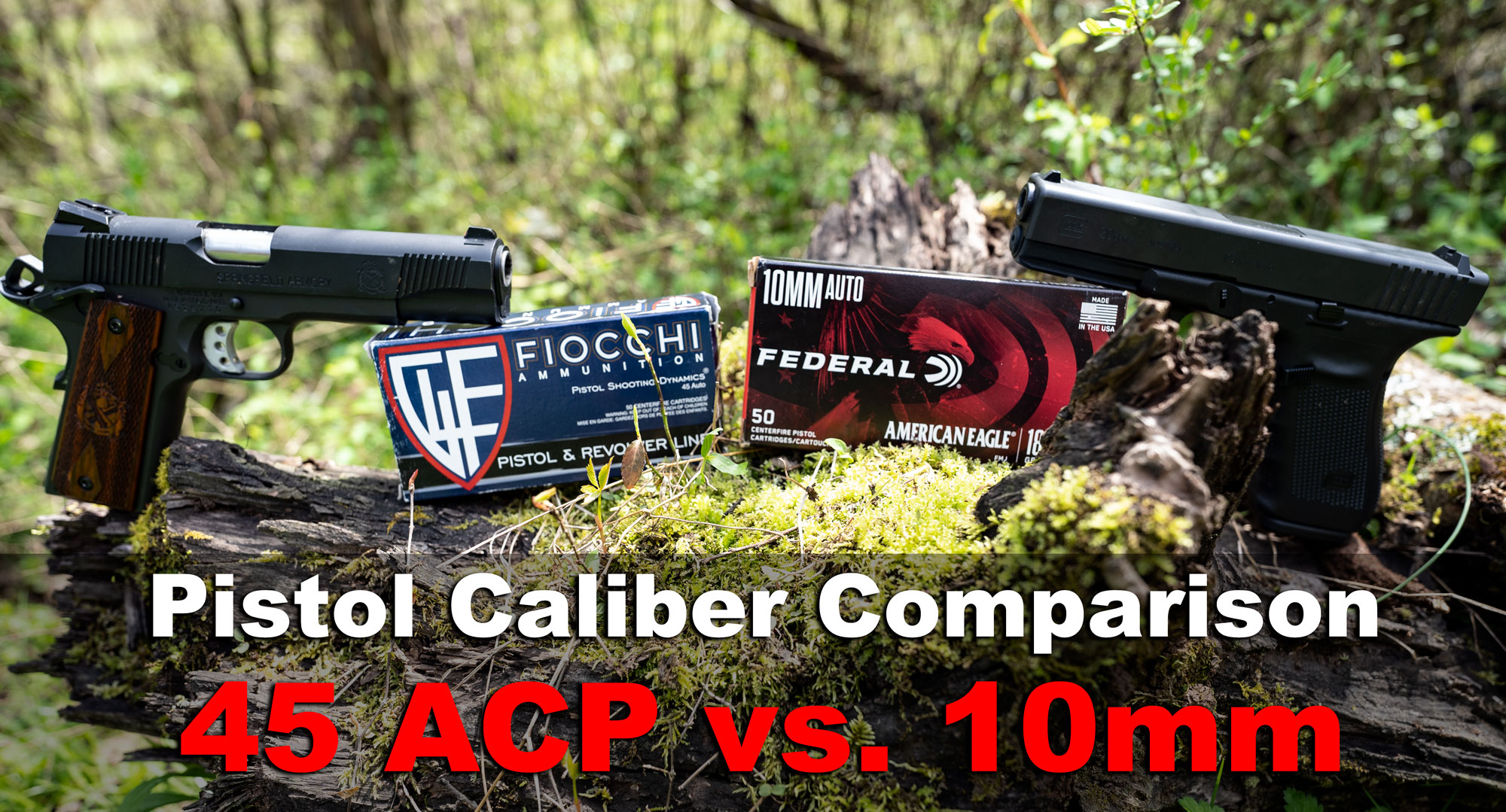 Two larger pistol calibers that are sure to ignite strong feels from shooters interested in muzzle energy and stopping a threat – what’s your best bet between 45 ACP and 10mm?

The .45 ACP and 10mm Auto are two cartridges that can deliver the terminal ballistics and accuracy you expect from a semiautomatic pistol. Which one is right for you? That depends on many factors, including how you will use the weapon and how often you visit the range. Let’s dissect the 45 ACP vs. 10mm debate and see which of the cartridges is a better fit for your range bag.

Many cartridges are eternally linked to a specific firearm. The .30-30 Winchester, for example, is linked to the Winchester Model 1984. The .45 ACP will forever be linked to the M1911, one of the most innovative and successful handguns in history.

The M1911 was not the first semiautomatic pistol, but it is probably the first to bring semiautomatic function into major use, both by government organizations and private citizens. The .45 ACP was designed for military purposes, and the Philippine-American War that lasted from 1899 to 1902 largely drove that development.

When the .45 ACP was released for personal use, it became popular for target shooting, personal protection, and even hunting. It remains a useful and popular cartridge to this day.

About the 10mm Auto

The 10mm Auto is a far more modern cartridge, although its approaching 40 years of age at this point. It was designed to be a medium-velocity cartridge that has better ballistics and accuracy than the .45 ACP, while giving terminal performance that is better than the 9mm Luger, which was used by many law enforcement agencies at the time.

Its commercial acceptance has been limited, although the cartridge got a boost from pop culture; a character from Miami Vice carried the Bren Ten pistol, which packs 10mm Auto ammunition (shown in the video clip above.)

Although it is not as common as other rounds like the 9mm or .357 Magnum, this cartridge is fast and powerful, making it an outstanding option for hunting and self-defense. 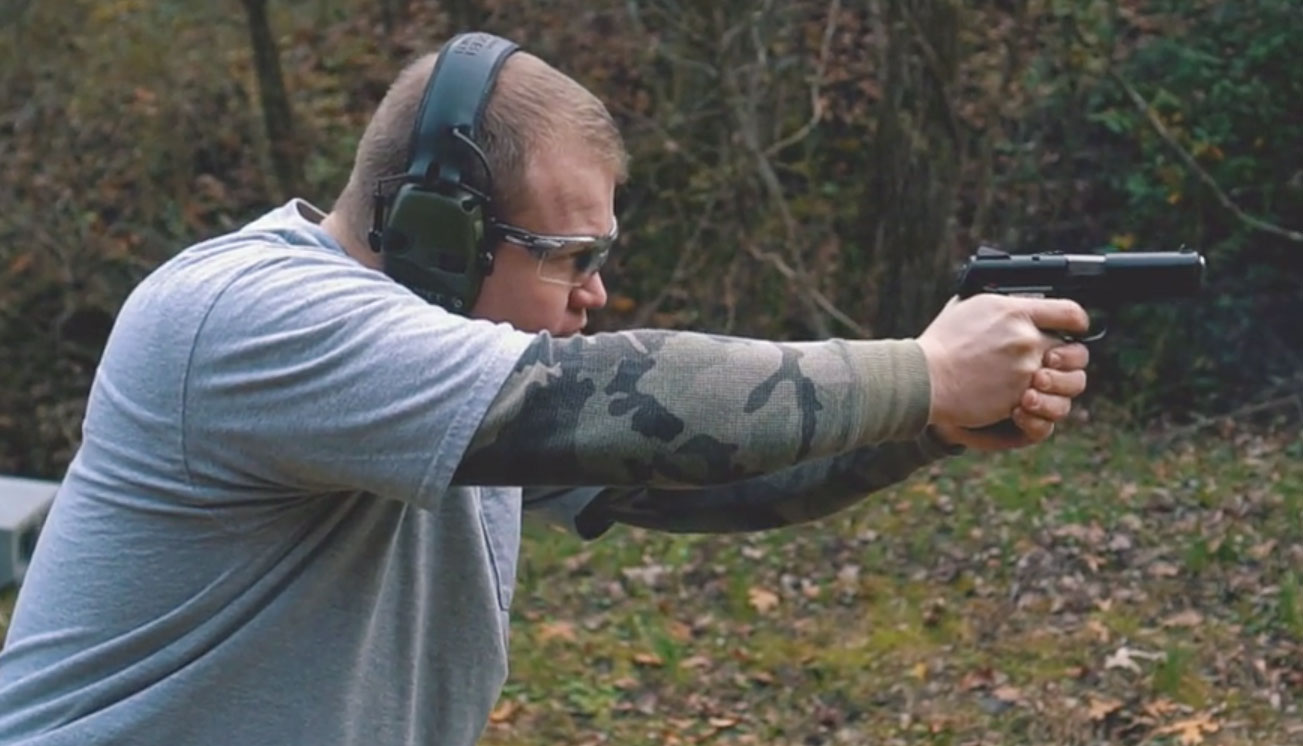 Pricing will make a difference in virtually every gun owner’s decision, and while neither of these bullets are extremely expensive, you will generally find that the .45 ACP is slightly cheaper. When creating this article, the lowest-cost 10mm Auto listed on on our site was $0.33 per round, while the lowest-cost .45 ACP was only $0.24 per round.

But these were different products from different manufacturers. When looking at the same products in each cartridge, we see similar results. For example, the Hornady’s XTP 10mm Auto with 155-grain bullets cost $1.05 per round, while the same product for .45 ACP (200 grain) was $0.90 per bullet. This pattern is repeated in many different comparisons.

When it comes to muzzle velocity, there is a lot of overlap between these two cartridges. While you can easily find certain .45 ACP cartridges that are faster than certain 10mm Auto cartridges, you will generally find that the 10mm is faster.

While we could compare individual cartridges like we often do, for velocity we can look at stats derived from our own gel testing. If you look at the .45 Auto page and scroll down to the bottom, you will see stats for 35 different .45 ACP products. Of all 35 products, there is a muzzle velocity range from 770 to 1,096 feet-per-second. The 10mm Auto had 11 entries, so it’s a smaller sample group, but we see speed ranging from 966 to 1,275. For the .45 Auto, only 7 of the 35 had muzzle speed at or above 1,000 feet-per-second, while all but one 10mm Auto were above 1,000 feet-per-second.

It’s clear that across the board, the 10mm Auto is generally a faster cartridge.

While the 10mm Auto has a clear advantage in speeds, a champion for overall muzzle energy is a little harder to determine. Basically they both have potential advantages: the 10mm Auto, with its higher speeds, can strike with a greater impact, but 45 ACP ammo tends to have heavier bullets, so both could be potential winners.

When looking at similar products, we see similar speeds. For example, the Federal has Hydra-Shok JHP rounds for both cartridges. The 230-grain .45 ACP has a muzzle energy of 414 foot-pounds (ft-lbs), while the 180-grain 10mm Auto has 424 ft-lbs.

When the bullet sizes are the same, it appears the 10mm Auto has a greater advantage, as there is more propellant in the larger case. Therefore, we can reasonably say that the 10mm Auto is a better choice if overall power is important.

If you are carrying for self defense, or keep a handgun in the house for protecting your family and property, you are likely concerned with the number of rounds that can be loaded into your weapon at a single time. While there is debate about the “right” load capacity, no one who is serious about self defense claims that a gun carries too many.

Load capacity largely depends on the individual weapon, but 10mm handgun can sometimes carry one or two more than .45 ACP weapons. While a single shot may not seem inconsequential, if it’s the shot that stops a threat, it’s the most important shot of your life.

A single shot, however, is not enough to significantly change someone’s decision. Calling the 10mm Auto a winner based on one more shot would seem like splitting hairs, and because there is so much overlap, so we are calling this one a draw.

Bottomline in the 45 ACP vs. 10mm Debate

The decision largely comes down to your personal preferences. The 10mm Auto is without a doubt the faster cartridge, and it generally has more power than the .45 ACP, but when it comes to affordability, the .45 ACP is a better option. So for people who want to shoot thousands of rounds at a lower price, the .45 ACP may be better.

Also, the .45 ACP tends to have more options available. Because of the popularity of the 1911 handgun, cartridge manufacturers have made many different product in .45 ACP, so you will not only find better prices, you will generally find more variety.

No matter which one you choose between 45 ACP vs 10mm, you’ll find excellent prices on high-quality ammunition from ammotogo.com. Visit our online store for rifle, shotgun, and handgun ammunition today!