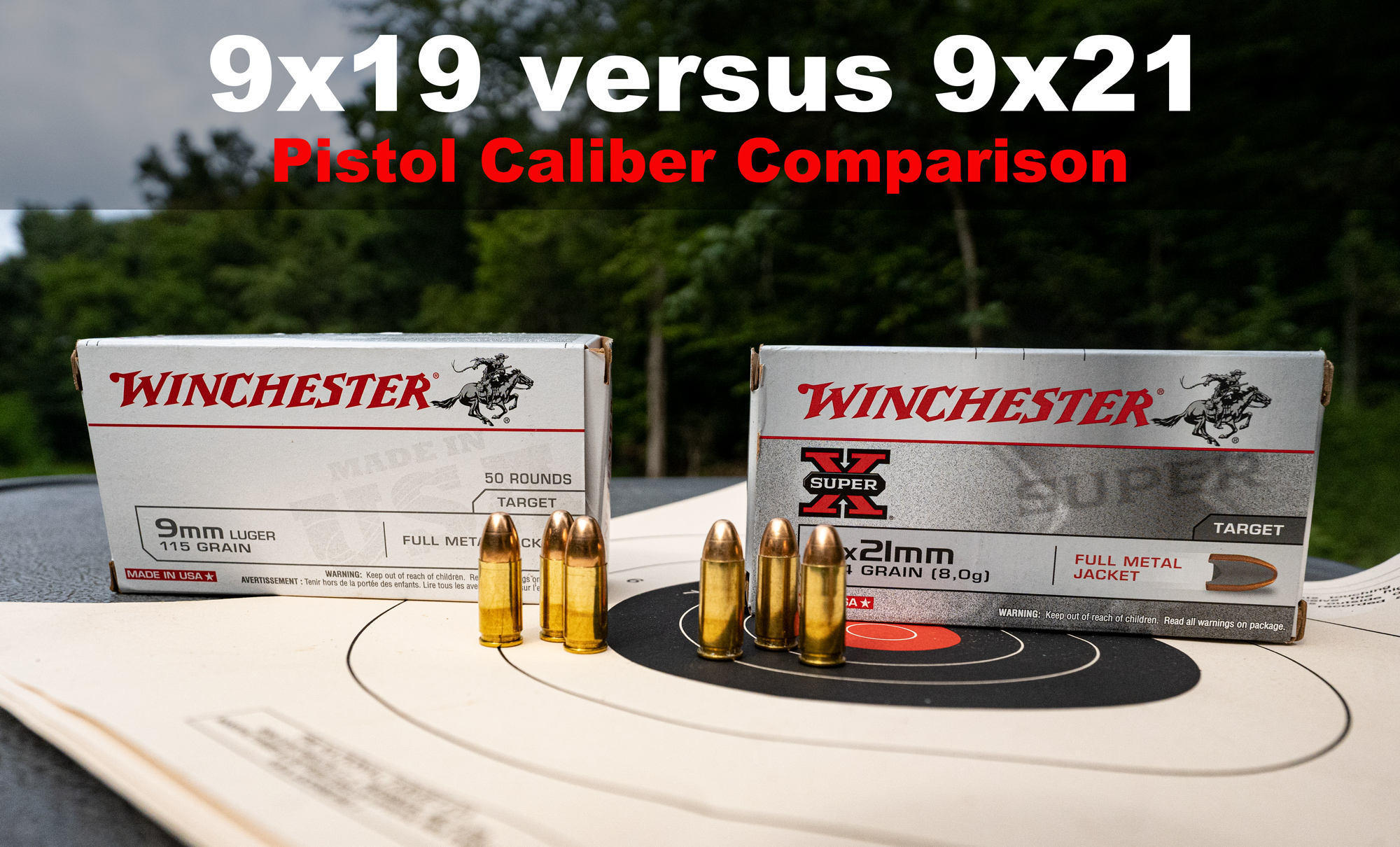 A side by side comparison of the similarly named but very different pistol cartridges – 9×19 versus 9×21.

The 9mm Luger, also known as the 9x19mm Parabellum or simply the “9×19,” is the most popular personal-protection handgun cartridge in America. Light and manageable, yet certainly capable, this round is ideal for both concealed carry and home protection. Thanks to an affordable price, it also makes a fine range cartridge.

In America, it’s the standard civilian handgun round. But in many European nations, this round is prohibited for civilian use. Because it’s technically military round, some nations barred the 9x19mm for private use. This led directly to the development of the 9x21mm, also called the 9x21mm IMI (for Israeli Military Institute) or 9x21mm Italian. (The round was developed by the IMI and an Italian agency, which is how the names came about.)

The 9x21mm IMI was created to match the 9mm Luger’s performance while obeying European gun laws, but how does it actually compare to the prominent 9x19mm? Should American gun owners adopt this European round?

The History of the 9x21mm IMI 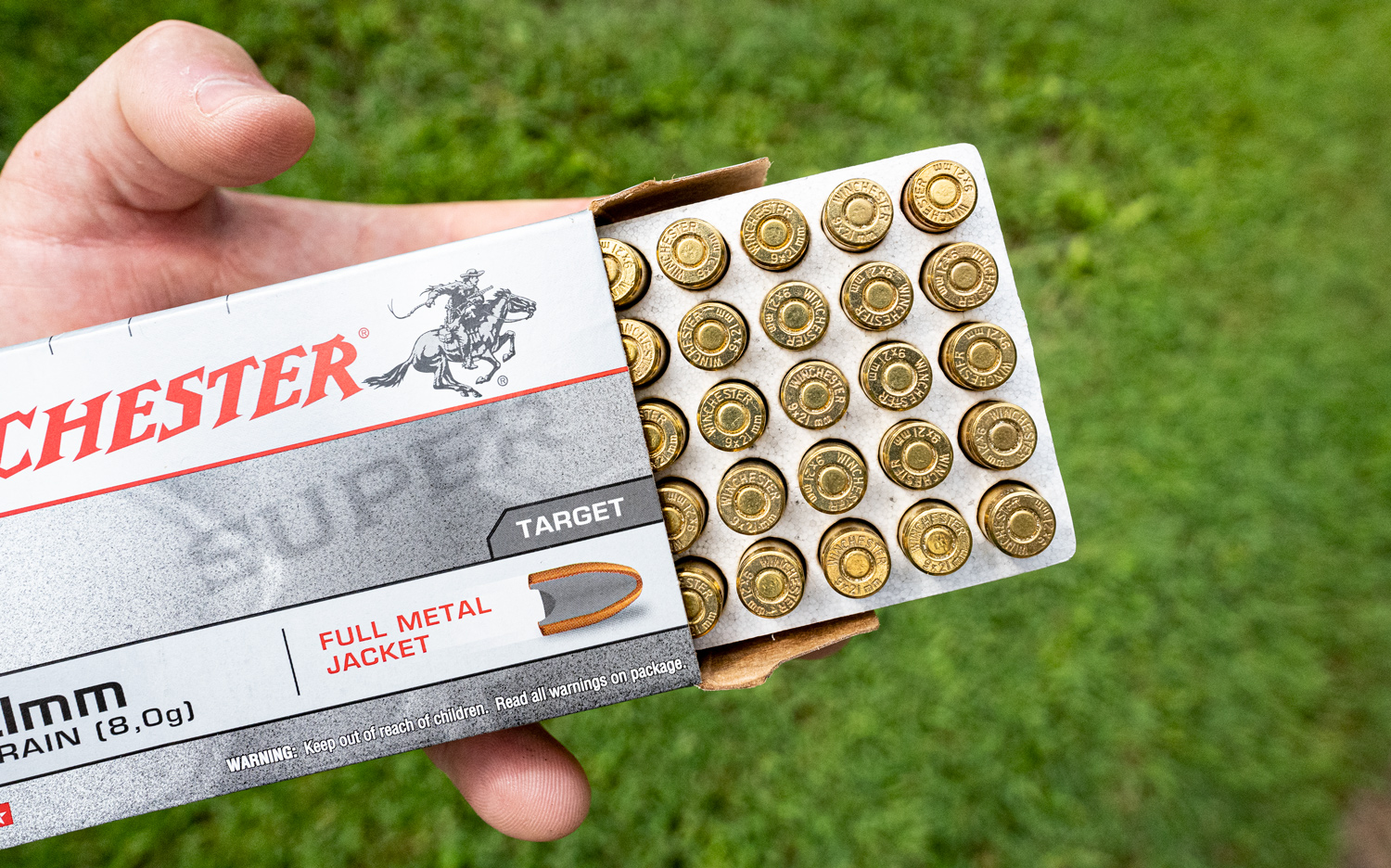 To understand the differences (and similarities) between these two rounds, you need to know the history of the 9x21mm IMI. Essentially, the cartridge was engineered to give Europeans, living in countries where the 9mm Luger was banned, a cartridge that delivers the same performance as the 9x19mm.

The 9mm Luger, being a military round, was banned in many nations, so manufacturers simply lengthened the case, giving them a basic workaround to the cartridge bans. Today the round is especially popular in Italy. Although rare, it’s also available in the United States.

No, the two rounds are not interchangeable. The 9×21 casings is slightly longer which could lead to malfunctions or worse in your 9mm Luger chambered pistols.

Physically, these cartridges are nearly identical. It’s difficult to discern between the two, but the 9x21mm does have a longer case, resulting in a slightly longer overall profile. This difference, of course, is noted in the cartridges’ names. (19mm vs 21mm.)

Other than that, these two rounds are strikingly similar, which is not surprising considering the 9x21mm was, from the very beginning, designed to match the 9x19mm’s performance. The real noticeable difference, the one that will significantly impact your ownership experience, is not a physical difference but overall market conditions.

The 9x19mm ammo is found in virtually every American outdoor shop, big-box store, and ammunition website. It’s one of the most widespread and adopted cartridges in the history of ammunition, and it’s available in a staggering assortment, from the budget-friendly to the highly advanced.

The same can’t be said for the 9x21mm ammunition, at least not here in the United States. This round is more of a rare novelty, and owners of weapons that pack these rounds will likely find difficulty keeping their magazines loaded.

It’s just a fact of the market: the 9x19mm is far more buyer-friendly than the 9x21mm Italian.

Because it’s so rare here in the United States, detailed information on the 9x21mm can be hard to find. There is a bevy of information, articles, and stats on the 9mm Luger, but the 9×21 is, to put it lightly, limited.

We can still put the puzzle together and view a fairly clear picture for the 9mm Luger vs the 9x21mm IMI.

They are fairly similar when it comes to muzzle speeds, generally ranging from 1,200 to 1,300 feet-per-second (fps.)

Fiocchi is another manufacturer with a 9x21mm product. Their truncated cone 123-grain round has a muzzle velocity of 1,220 fps. Their 124-grain Pistol Dynamics 9x19mm has a velocity of 1,150 fps.

This is a small sample, but it appears the 9x21mm is faster than the 9mm Luger. If nothing else, it’s certainly capable of matching the 9x19mm’s speed. Of course, if you find a 9mm NATO load like M1152, you can match those speeds with a 9×19 cartridge.

For gun owners interested in personal protection, bullet energy is likely the more important factor. Once again, the 9x21mm appears perfectly capable of keeping up with the 9x19mm Luger.

These numbers are in the typical range for a 9mm Luger, which usually has a muzzle energy of roughly 350 to 550 ft-lbs.

Whether for training, target shooting, or defense, a light recoil helps shooters make smooth, accurate secondary shots. Neither of these cartridges will be considered a hard-hitter, and while they may not be as light as a .22-caliber round, they allow for easy shooting for beginners and experts.

There are so many similarities between these cartridges; how can you possibly decide on the right one?

For most gun owners, it all comes down to the market. The 9mm Luger is, by far, the more accessible and versatile cartridge. In this comparison, it’s not even close, as the 9×19 is the most popular handgun cartridge in the country, while the 9×21 is, at least in the U.S., an interesting European novelty.

So if you want convenience and accessibility, the 9x19mm Luger is easily the top choice. However, if you are an enthusiast who wants to try an interesting and unique cartridge, a handgun chambered for the 9x21mm will bring plenty of enjoyment!

No matter which round is right for your needs, you’ll find affordable cartridges for target shooting, hunting, and personal protection at ammotogo.com. Visit our site and place your order today!