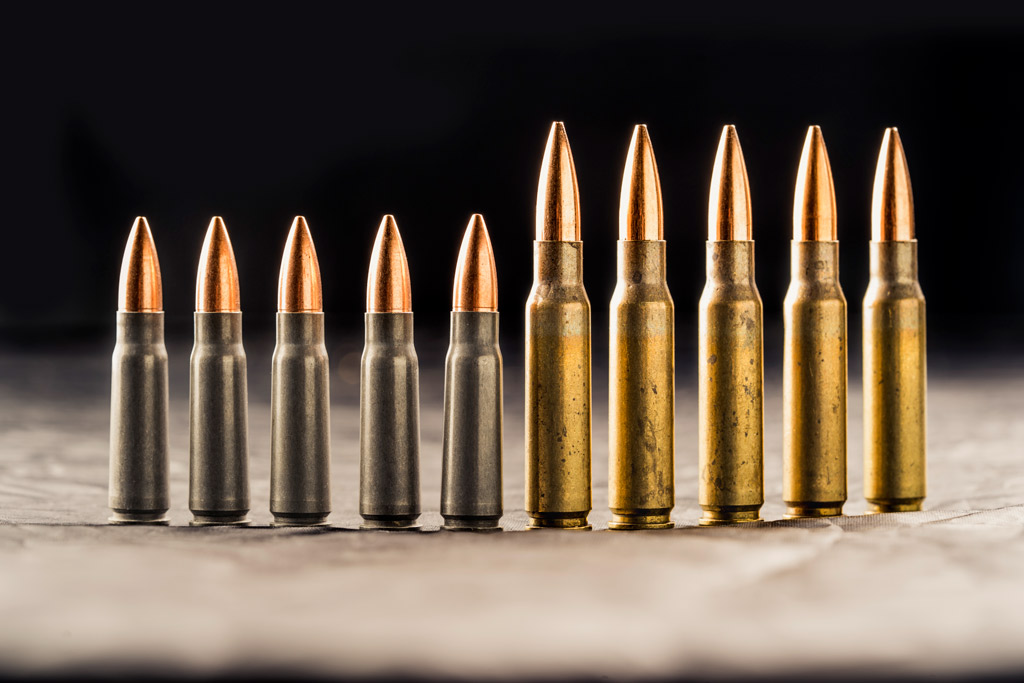 The 7.62x51mm and 7.62x39mm cartridges might be similar in caliber size, but they are two very different rounds. To help you understand the differences, it helps to know the history and the performance of the 7.62×51 vs. 7.62×39 cartridge.

A History of 7.62 Cartridges

The 7.65×51 ammunition cartridge was developed for the North Atlantic Treaty Organization (NATO), which was founded essentially as an anti-Soviet group to counterweight the Soviet Union’s control of the eastern Europe. NATO wanted to have a standardized rifle cartridge that could be used among all their forces.

Using the .308 Winchester cartridge as a base, the round was modified slightly. They wanted to eliminate feeding issues and to reduce overall cartridge pressure .

The 7.62×51 or 7.62 NATO (which is another common name for the caliber) was officially introduced into military service in conjunction with the M14 rifle. This rifle would go through multiple modifications throughout the years.

7.62×51 was first released in 1954, but American forces did not use the ammunition in significant fighting until the Vietnam war. In Vietnam, the military discovered the cartridge had a few disadvantages in jungle warfare.

Because of its size, troops could not carry as many rounds as the enemy, who carried the shorter 7.62x39mm. Also, the length of the M14 rifle made combat more difficult in tight jungle space.

Eventually, the M16 rifle and 5.56x45mm cartridge replaced the M14-7.62 NATO combination as the primary American weapon of that conflict, but the modified .308 Winchester remains an important part of United States and European military forces to this day.

Military forces from the U.S. and other NATO countries still use the 7.62 NATO, although it is primarily used for mounted-machine-gun and sniper-rifle purposes. In most cartridges, you will find the 7.62 NATO with bullets at roughly 145 to 175 grains.

7.62×39 ammunition and the caliber as a whole, which is often called the “7.62 Soviet” (for clarity, this is what we will call it), was developed in the 1940’s as a do-it-all round for the Soviet Union. At the time, the Soviet Union was engaged in war with Nazi Germany.

The Soviets wanted a round that could meet many different needs. Primarily, they wanted to maintain longer effective ranges than pistol cartridges while being small enough to be carried by infantry troops. The initial development started in 1944 and the caliber was used at the tail end of World War II.

After World War II, the AK-47 was developed. Chambered for the versatile 7.62 Soviet, the AK-47 became a dependable weapon for Soviet and communist forces throughout the 20th century. The rifle still has a reputation as a reliable weapon that can withstand the most rugged conditions, from mud to sand to frost. With the spread of the AK-47, the 7.62 Soviet became one of the most-widely used cartridges in the world.

7.62×39 remains a popular cartridge among both military personnel and has even become a popular round for private gun-owners in America.

It is used in hunting for game as large as whitetail deer. It’s also become one of the most popular competition and general-shooting rounds, thanks in large part to its high availability and relatively low cost. When searching for ammo, you will find 7.62 Soviet rounds with a bullet weight of roughly 123 grains.

It’s difficult to compare the two cartridges, as it is not a straight comparison and rarely are any variables the same. They have different powder loads, different grain sizes, and are not interchangeable cartridges.

However, we’ll do our best to help you understand the difference between the two by focusing on the aspects that concern most gun owners.

Although pricing will depend on the brand, where you buy, and market availability, you will likely discover that the 7.62 Soviet is often cheaper than 7.62×51.

Because the 7.62 NATO is a larger cartridge loaded powder, it delivers the bullet at a faster speed than the 7.62 Soviet, despite the heavier projectile.

As you might have already guessed, the larger powder load and heavier bullet in the 7.62 NATO results in higher ratings for muzzle and down-range energy.

If you still can’t decide between the two, it’s probably best to think about your goals for rifle ownership.

If you’re interested in long-distance competition or hobby shooting, then the 7.62 NATO is likely your best option. If you are more interested in high-volume shooting, a rifle chambered for the 7.62 Soviet will likely be a better choice. In either case, both are tried and true calibers that are a true joy to shoot.