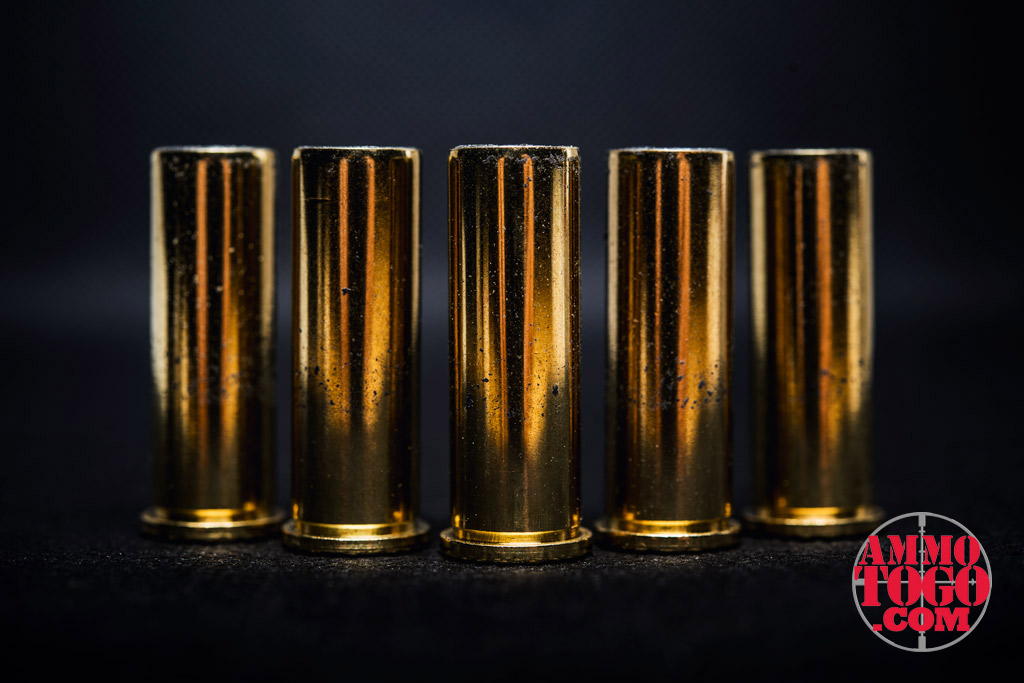 A darling of a bullet among competition shooters, this article lays out what exactly a wadcutter bullet is and why you might consider shooting them.;

Of all the ammunition options available, perhaps the most unique of all is the wadcutter. Wadcutters are interesting but a fairly uncommon ammo choice for most of us. But, if you participate in target shooting with a handgun, you might want to get to know it.

What are Wadcutter Bullets?

A wadcutter bullet is essentially just a lead cylinder with a flat top. They’re commonly used by shooters who compete in matches but can also be an effective round for self-defense.

A cartridge loaded with a wadcutter bullet will have the bullet fitted flush into the casing. The full length casing that runs from top to bottom is the feature that most stands out with these cartridges. The bullet itself is practically hidden, visible only from the front. The bullet has a flat front, and the casing completely envelopes the sides of the bullet; only looking at the front of the cartridge will you see any lead. Essentially, the cartridge looks like a cylinder. (Except for the wider lip at the base.)

Why Do Competitive Shooters Use Them?

If you’re used to lead round nose, full metal jacket, jacketed hollow points, or many other common bullet styles, you’ll likely think that the wadcutter bullet looks a little weird. While it has found other uses, wadcutters serve a very specific purpose: competitive shooters hunting paper targets. Round or sharp-noses bullets, such as a full metal jackets, tear through the paper, leaving what essentially amounts to a slash; you don’t actually remove any of the paper.

With wadcutters, the bullet actually cuts or punches out a circle of the paper, removing a clear hole and leaving a clearly-visible puncture in the paper target. Think of jabbing a pen into a piece of paper; you don’t actually remove any of the paper, you just create a hole. This is how traditional ammunition affects paper targets. Now think of a paper hole puncher that removes a round hole; this is the effect from a wadcutters. Because wadcutters leave a clear hole in the paper target, they have become a preferred choice among target-shooting gun owners, especially those that participate in competitions. The location of impact is very clean and visible which often allows competitors to get the most points for their shooting in IDPA or USPSA matches.

What is a Semi-Wadcutter?

Semi-wadcutters are a cross between traditional lead round nose and the full wadcutter. They take many different forms depending on the manufacturer, but they basically look like a short cylinder with a smaller cylinder sitting on top, which can be angled inward. The edge from the bottom cylinder leaves a clean hole in paper, but it won’t be as defined as a full wadcutter. Semi-wadcutters can also be loaded to higher pressures and velocities (more on wadcutter velocities below). This makes them a fairly common option for hunting and self-defense loads.

Should I Only Use Wadcutters in Revolvers?

Wadcutters are generally considered for use in revolvers only, not semiautomatic pistols. This is because the front edges make cycling more difficult in a semiautomatic pistol, significantly increasing the chances of jamming in the chamber. Full wadcutters won’t feed as smoothly as other ammunition options unless they are specifically designed for semiautomatic feeding. Semi-wadcutters, however, can be more reliable in pistols and can sometimes be used in semiautomatic weapons. They have found use in .45 ACP cartridges, often for target-shooting with a 1911-style pistol.

One of the most significant disadvantages of wadcutters is the reduced velocity. This is not actually caused by the bullet design, but by how the cartridge is built. Wadcutters leave a lot of lead residue in the barrel.  Typically, the higher the speed, the more residue you will have. For this reason, manufacturers reduce the velocity in wadcutters. The other disadvantage of wadcutters is that they are less aerodynamic. As you may have guessed, the flat cylinder shape of the bullet means the projectile will have more drag, reducing distance and down-range velocity. However, because you’re likely using wadcutters with a handgun, significant reduction in down-range accuracy and velocity may not be as concerning.

Can I Use Wadcutters for Self-Defense?

Some handgun experts may scoff at the idea of using wadcutters for personal protection or concealed carry. However, the low velocity (resulting in low recoil) can actually be an advantage for some gun owners. The kick from a small snub-nosed revolver firing full-powered ammunition can be difficult to manage. It’s even painful for some people. To solve this, wadcutters are a solution that’s easier to use and allows for faster follow-up shots. Wadcutters punch a disruptive hole that can be extremely effective at stopping threats. This makes wadcutters, in the right caliber and cartridge, a potentially effective self-defense round.

Final Word: Wadcutters are Primarily for Competition Shooting, But Self-Defense is an Option

The most common use for wadcutters is competition shooting, plain and simple. These bullets can serve self-defense shooters but they were flat out created for competitive shooting.