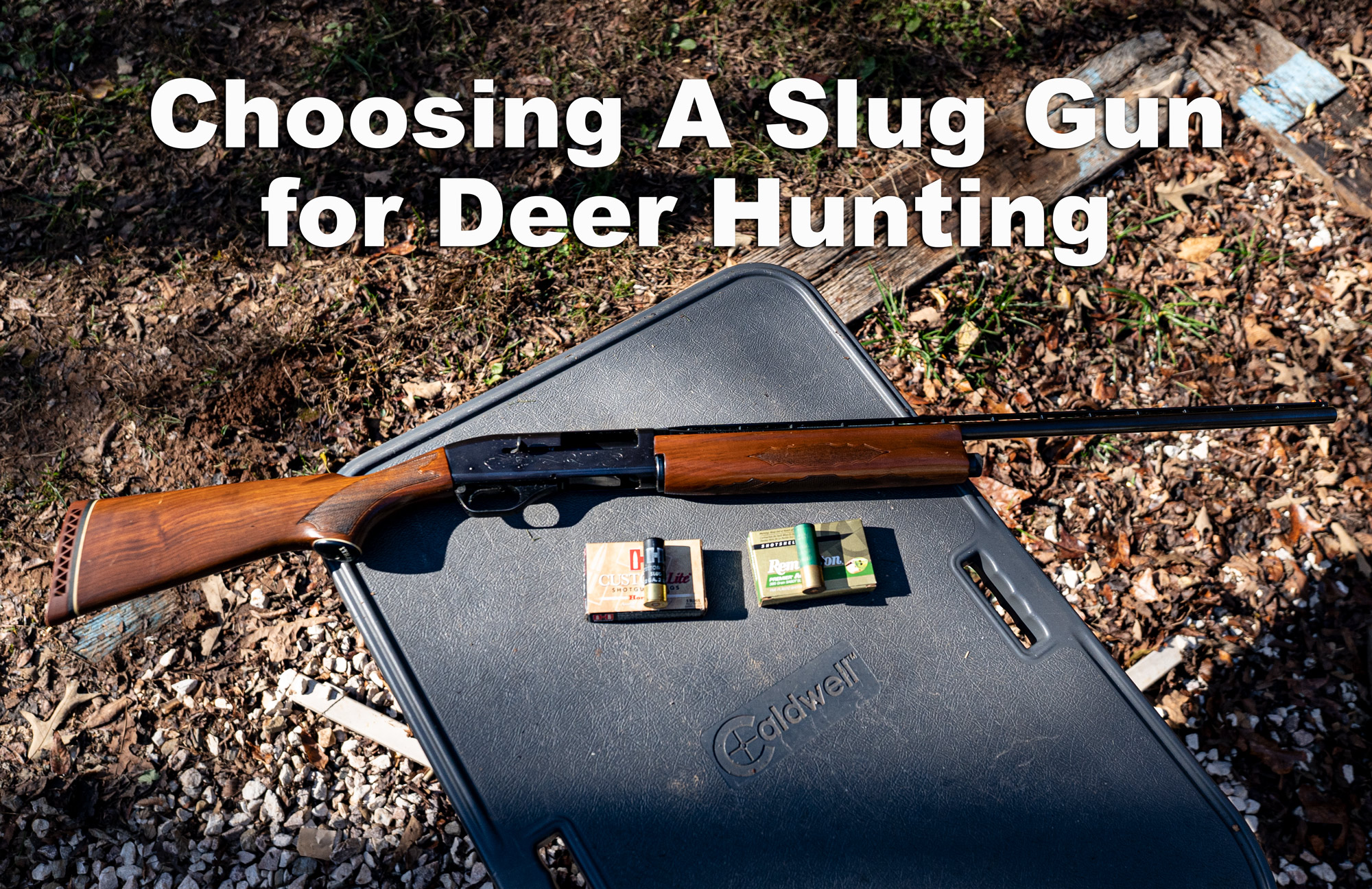 An easy to follow guide that shows you how to pick the best slug gun for your next deer hunting trip along with some ammo tips.

I grew up deer hunting in a rifle-restricted county in Southeastern Virginia. Most of the deer I killed, as well as most of my dad’s trophies that grace the living room walls of my parents’ house, came out of Surry County, Virginia and fell to the power of a good slug gun. While that old Remington 870 kicked like a mule and had plenty of shortcomings, it is hard to argue the effectiveness of that weapon for taking whitetail deer.

Not every hunter is able to hunt an area where rifles are legal for whitetails. Many individual counties in the United States, and even some entire states (including Illinois, Iowa, Ohio, Indiana, Maryland, New Jersey, Massachusetts, Delaware, Maine, and Rhode Island) have “shotgun only” restrictions.

Most hunters agree hunting deer with a rifle is more effective than using a shotgun. But this doesn’t mean there isn’t hope for hunters in “shotgun states.” The good news is: rifle restricted hunting areas are home to bigger bucks.

The Buckmasters Whitetail Trophy Record (BTR), the nation’s most popular whitetail trophy record, features between 13,000 and 14,000 of the biggest whitetail bucks harvested on the North American continent. According to BTR, a staggering 78 percent of the top scoring bucks in the United States were harvested in shotgun mandated states. Whether this is causality or correlation is hard to tell, but with stats like that, it’s a wonder there aren’t more deer hunters headed for rifle-restricted hunting zones.

There is even better news for hunters seeking big bucks in restricted areas. While accuracy in shotguns has always been a serious struggle, we’ve come a long way from our grandfathers’ spray-and-pray technique with a double barrel loaded and 00 buckshot. Today, most major firearms manufacturers are rolling out dedicated slug guns with stocks, sights and barrels designed to milk accuracy and power out of modern ammunition. 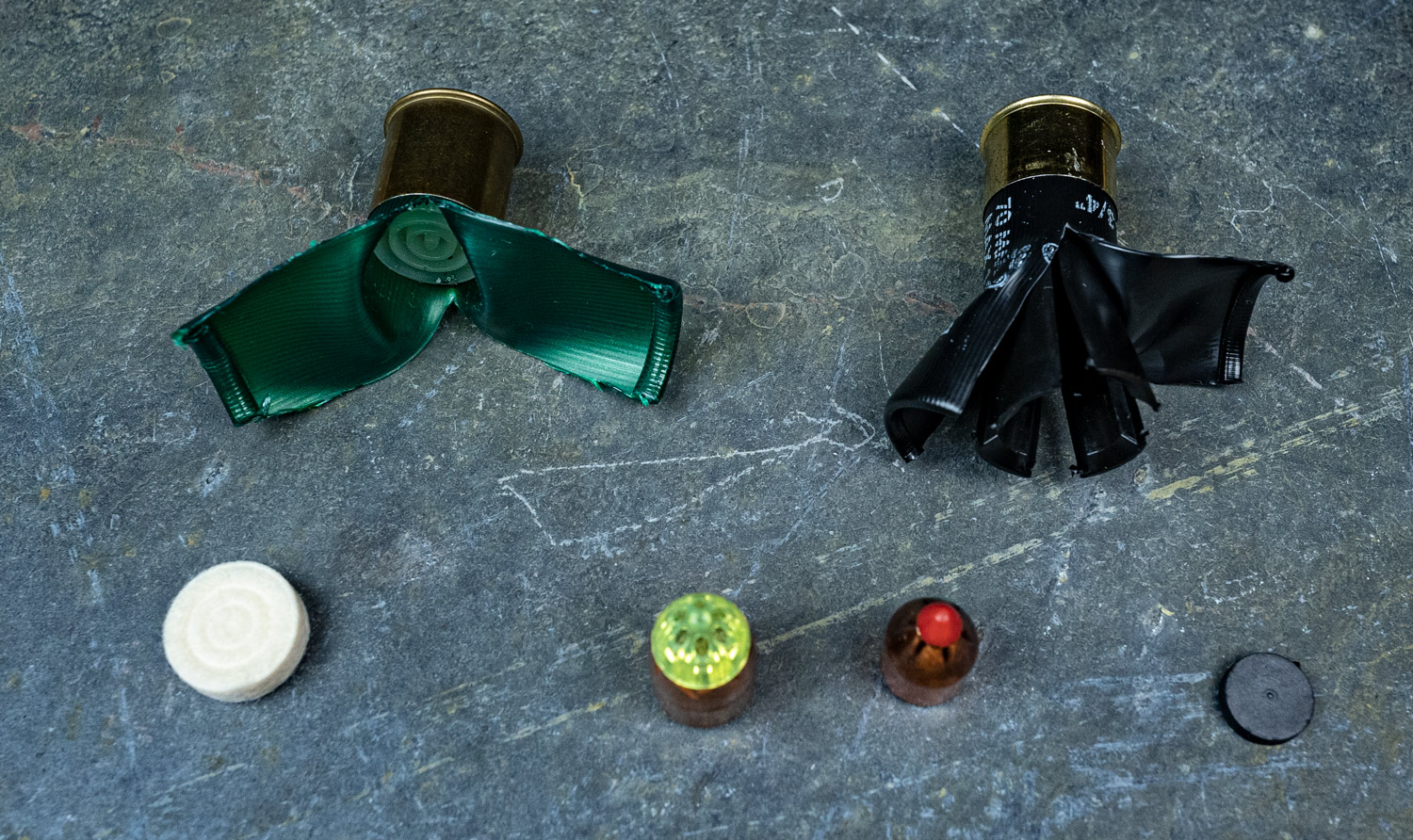 More than 30 years have passed since I took my first buck with that old Remington 870. Back then, just about the only option was a traditional Foster slug shot through a smoothbore barrel with open sights. Stretching a shot past 50 yards was risky, even reckless.

Walk into a gun store today and you’ll see a wide variety of technologically advanced slug designs. You’ll also find plenty of fresh-from-the-factory shotguns, with new barrel designs, from which to shoot them. Unlike my first slug gun, today’s best slugs and slug guns deliver incredible accuracy well beyond 100 yards, and can even outperform many hunting rifles.

As for knockdown power, the proof is in the pudding. Winchester Supreme Elite Partition Gold Sabot Slugs (3-inch 385 grain) deliver a mean 2032 foot pounds of retained energy at 100 yards. Traditional soft points fired from a classic lever-action .30-30 aren’t capable of producing that kind of power even on a good day. We’ve certainly come a long way.

Modern slug ammo comes in two basic types: sabot and rifled, although there are many variations within both types. 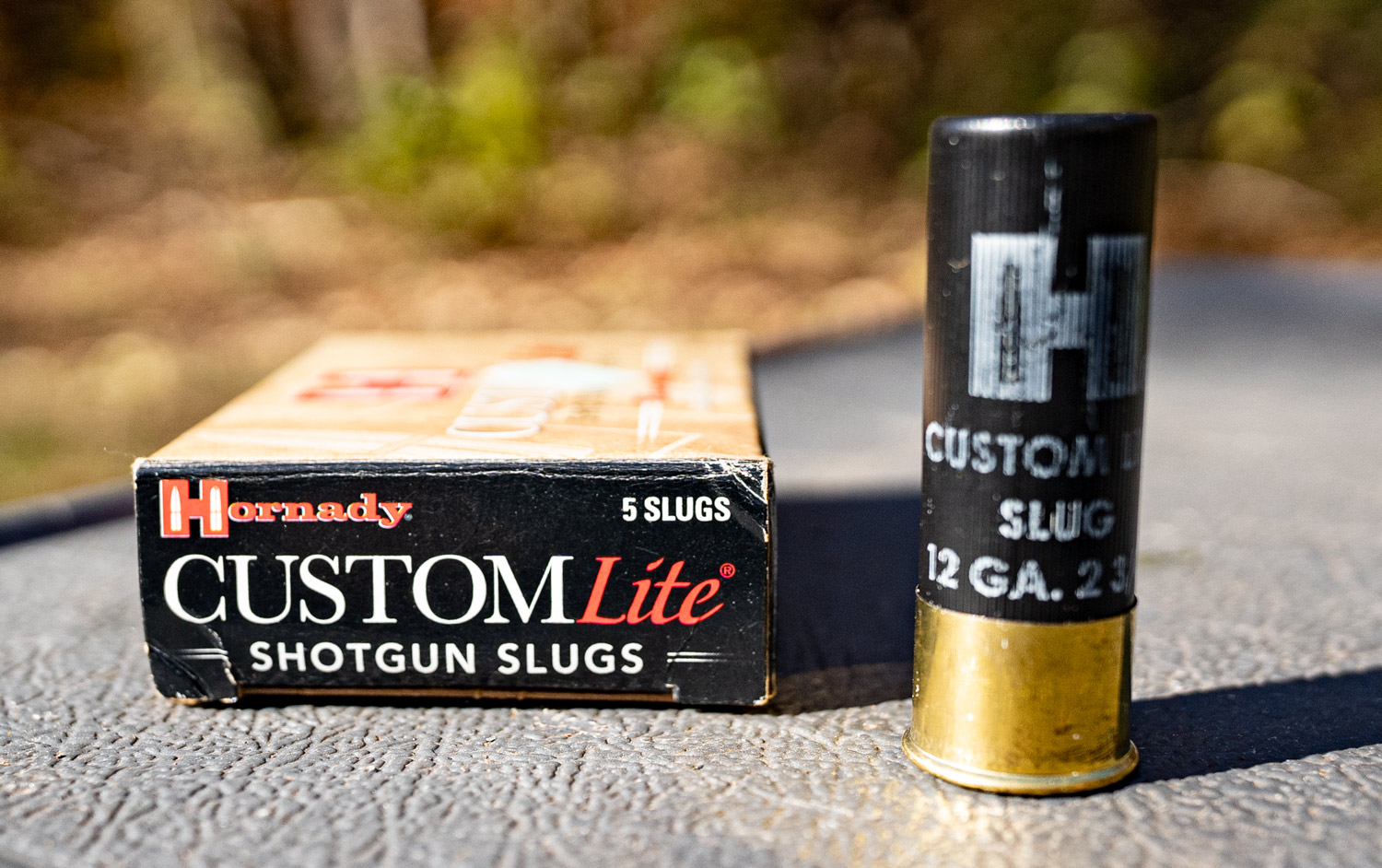 As the name implies, 12 gauge rifled slugs are engineered with “rifling” grooves. Contrary to popular belief, these “rifles” are mostly cosmetic and do not actually cause significant spin. The main purpose of the ”rifled” grooves is to allow the slug to pass through any standard choke design.

Foster-type rifled slugs are engineered with a short, blunt lead bullet. These projectiles achieve decent accuracy, not through ballistic spin, but with the same aerodynamic design as a badminton birdie. With a solid front and hollow rear, the forward weight balance delivers reasonable accuracy, just like a shuttlecock. 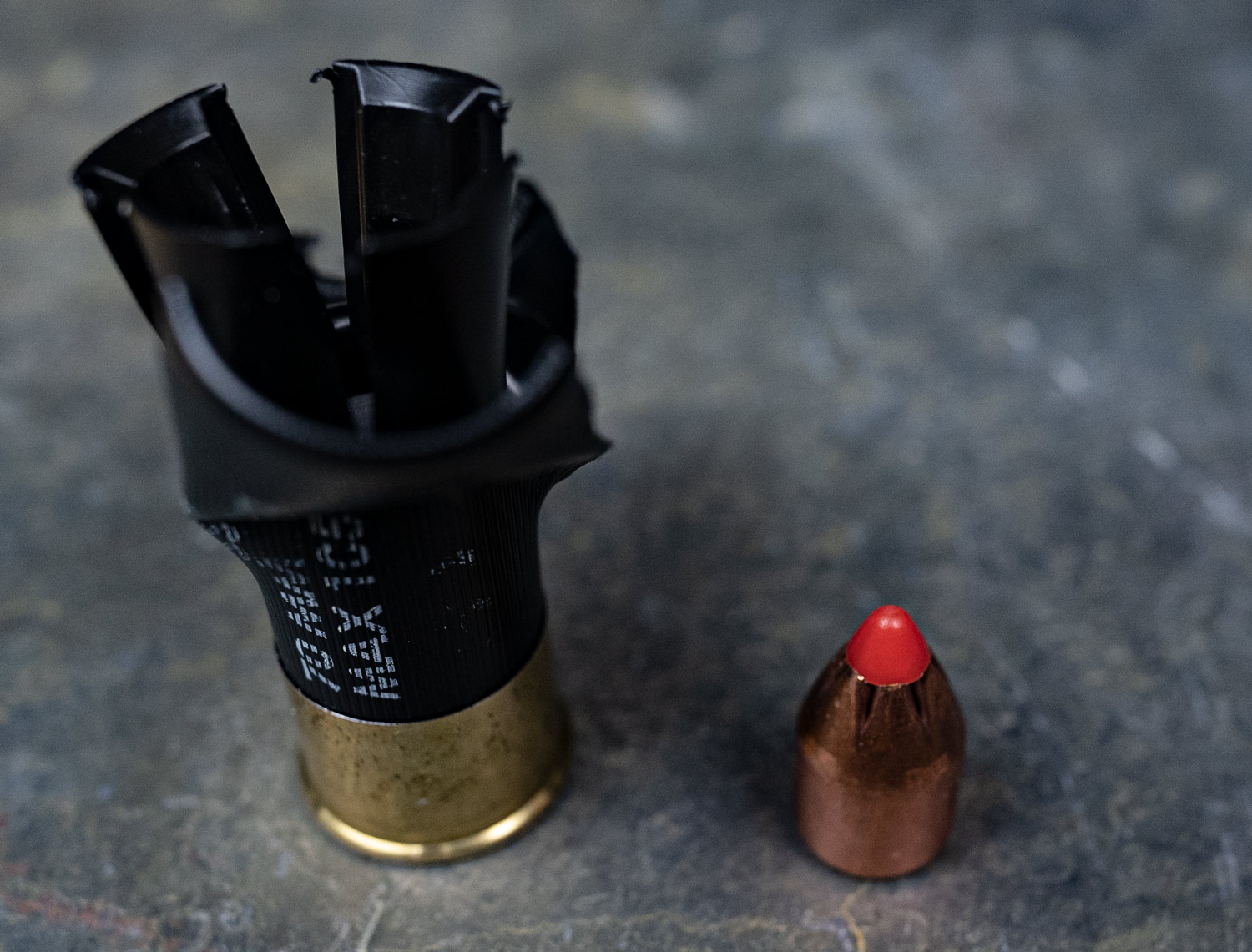 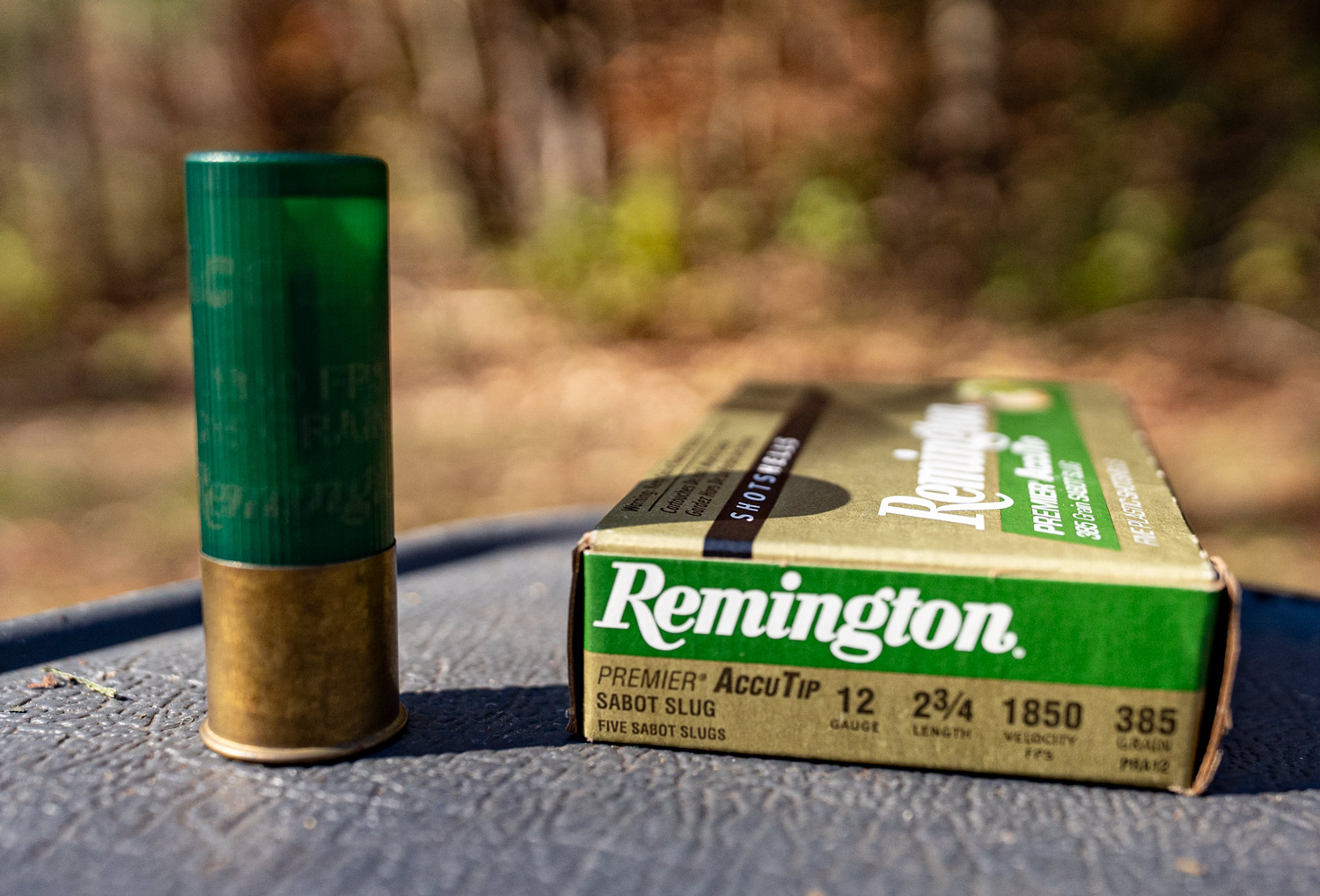 With the relatively recent introduction of shotguns with rifled barrels, ammo manufacturers developed the sabot slug. Pronounced “say-bo,” the name is derived from the French word for clog or shoe.

Sabot slugs feature a solid projectile encased in a removable sabot. The sabot is spun by the rifling in the shotgun’s barrel, but separates from the projectile after leaving the muzzle. The slug continues to spin in flight, stabilizing trajectory for better accuracy, especially over longer distances. Sabot slugs consistently group well, even at 200 yards, offering the accuracy needed to ensure quick and humane big game kills.

You can learn a lot more about this ammo in our rifled slugs vs sabot slugs guide here.

Choosing a Shotgun for Slugs

Picking a slug gun really boils down to what fits you and your hunting style. Consider what type of hunting you do, as well as what type of firearm you can confidently handle. When possible, take a few models for a test run on the range to get the feel for shooting them.

At the very least, be sure to shoulder a few showroom models to see how well you handle the length and weight. Make sure the stock fits well on your shoulder, presenting a well-aligned and clear sight picture. With a slug gun, you may have to hold your firearm on target to pull off a solid steady shot. This is quite different from hunting with buckshot or birdshot, where quick shots are taken on the fly. For this reason, you want to choose a gun that is well-balanced and easy to shoulder for longer periods of time.

There are basically three different types of shotgun barrels to choose from: smoothbore (with any choke), smoothbore with a screw-in rifled choke, and a fully rifled barrel. To get the best performance out of your slug gun, you need to match the type of slug ammo with the right barrel style. 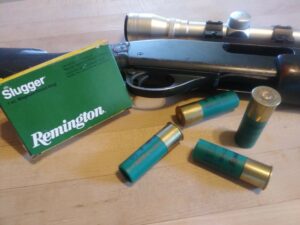 Older shotguns are synonymous with smoothbore barrels. A smoothbore is exactly what it sounds like, a slick barrel without grooved rifling. Perfect for shooting buckshot when jumping whitetails in heavy brush, or driving deer with dogs or other hunters, smoothbore shotguns are the traditional choice for hunters. When loaded with modern rifled slugs, a smoothbore shotgun becomes extremely accurate and deadly out to 100 yards.

The barrel on a smoothbore shotgun does not cause the slug to spin at all. This design offers limited range and limited accuracy when compared to other barrel styles. However, smoothbore shotguns are incredibly versatile. If you need to switch between shooting buckshot and slugs, a smoothbore shotgun allows you to do so with zero complications. You can even load the chamber with a Foster slug and back it up with 00 buck. This is handy for shooting deer on the move, whether in front of dogs or jumping deer in thick brush.

Smoothbore with a Rifled Choke

Gone are the days of shotguns with fixed choke barrels. Today, screw in chokes are the norm, offering incredibly versatility. A screw-in choke extension allows you to customize one shotgun for several applications. With the twist of your wrist you can optimize your shotgun for ducks, turkeys, skeet, or deer hunting.

A smoothbore shotgun with a screw-in rifled choke will deliver a small amount of stabilizing spin on both rifled and sabot slugs. This increases shot-to-shot accuracy and reduces projectile drop over distance, allowing you to increase your shotgun’s effective range.

Relative newcomer to the world of shotguns, rifled barrels feature integrated groves designed to spin projectiles. If you plan on taking shots over 100 yards, a rifled barrel is the best way to go.

For increased power and accuracy, a rifled barrel paired with a sabot slug is best. Sabot slugs are designed to be spun in barrel rifling. The faster they spin, the more stable the flight pattern and the more consistently the sabot separates from the projectile.

If you want a dedicated slug gun, a shotgun with a fully rifled barrel is your best option. However, if you’ll be using the same gun with buckshot or birdshot, you should probably choose another option as the shot will wear the rifling of the barrel over time.

Slug shotguns are known for delivering intense recoil, and many a hunter has walked away from shooting with a bruised shoulder or cheekbone. If the recoil from a 12-gauge is too much, 20-gauge shotguns are a fantastic way to reduce recoil while still delivering enough power for an ethical kill.

In terms of ballistics, 12 and 20 gauge sabot slugs fired from a quality rifled slug gun are virtually identical. The biggest difference in the two loads is the diameter of the projectile. The larger diameter slug fired from a 12 gauge will make a larger wound channel than any round from a 20 gauge. This will also leave a better blood trail. In theory, a 12 gauge slug gun is at least marginally better for producing quick, humane kills.

Ultimately, you want to choose a weapon you can shoot with confidence and proficiency. Often in the heat of the hunt, recoil isn’t even an issue. When you’re pumped on adrenaline, focused on that big buck in front of you, you won’t even feel the recoil.

However, practicing with your firearm will helps develop consistent shooting form and increase hunting success, and the range is where recoil can quickly become an issue. If target practice with your shotgun is a nightmare, it isn’t going to build shooter confidence.

Practicing with your slug gun cannot be stressed enough. In the end, an accurate, well-placed shot delivers the best results no matter what the projectile’s diameter.

Many regular shotgun hunters have a tendency to shoot a slug gun the same way they shoot regular shotgun ammunition. Throwing up your gun, pointing in the general direction of the target, and slapping the trigger isn’t going to cut it, however. While this method works fine when you’re spraying a cloud of pellets downrange, it isn’t going to produce results with even the highest performance slugs.

It is important to remember, a slug is a single projectile. You need to approach shooting with the same careful technique you would use with a traditional rifle. Aim carefully. Breathe. Pull the trigger with slow steady pressure.

A Word About Sights 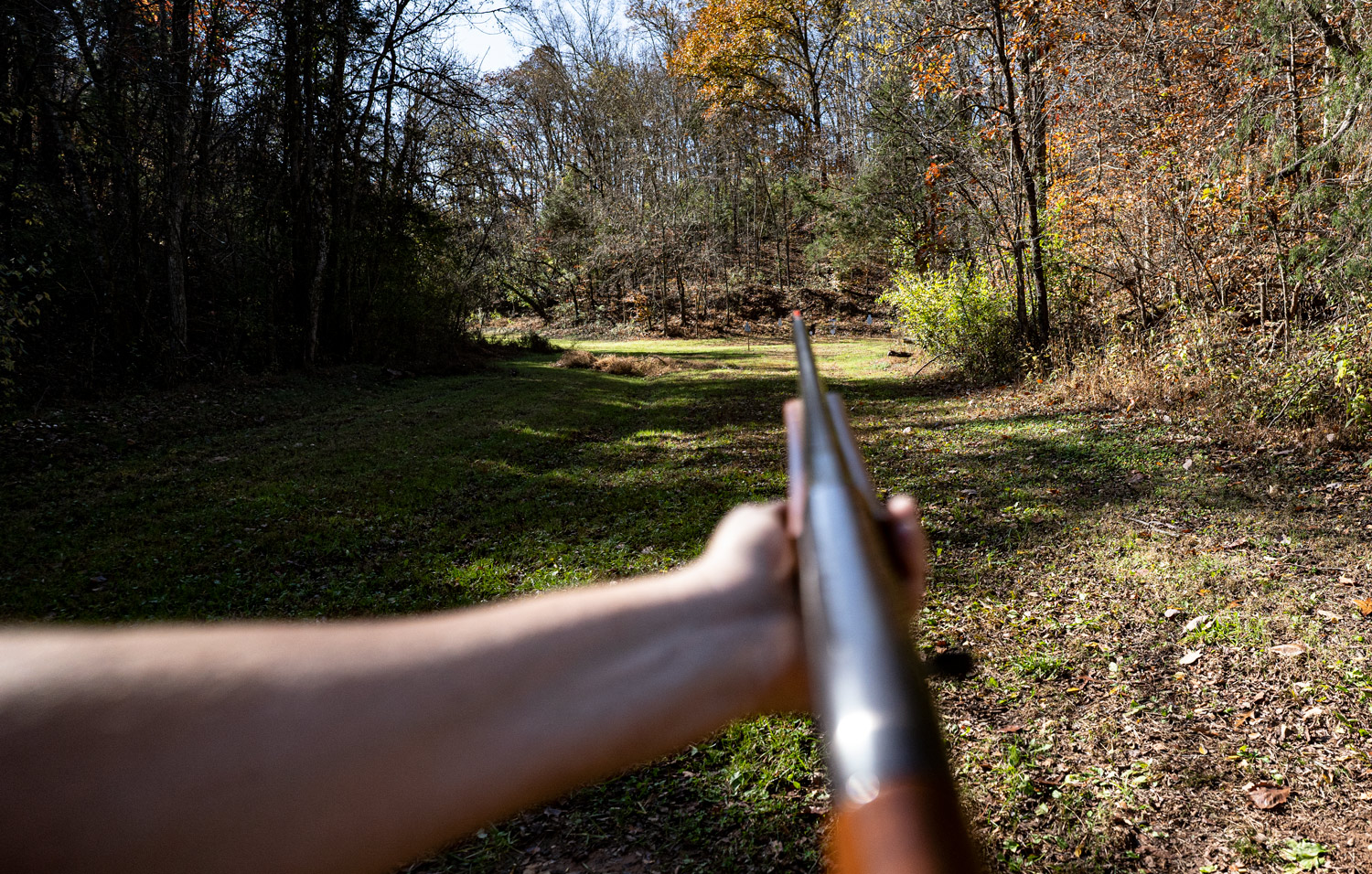 If you plan to load your grandfather’s old 12 gauge with Foster slugs and head out for the back 40, beware. Most traditional shotguns have basic, single bead sights. While this is adequate for slinging shot at passing doves, it isn’t going to cut it for long-range whitetails. Lining that monstrous bead on the vitals of a buck standing 100 yards away across cut corn is nearly impossible. The bead is liable to cover the whole deer, and you’re likely miss, or worse wound the animal and not recover it.

You can improve the effectiveness of your slug gun by adding rifle-type front and rear sights. Another great option, especially for long-range hunting is a good quality mounted scope. However, it is still important to remember a slug gun is still a shotgun. Don’t expect it to perform like a high powered rifle. Even at its best, a slug gun is firing ammo with a muzzle velocity of under 2000 feet per second. It still has limited range, accuracy, and power when compared to any hunting rifle.

A slug gun isn’t exactly a shotgun and it definitely isn’t a rifle. If you use your slug gun the way it’s designed to be used, it makes a fine whitetail weapon. Overestimate its abilities, and you’ll only end up frustrated.

Whatever slug gun system you choose, the most important thing you can do is practice. Spend some time at the gun range. Become familiar with your weapon. With proper preparation and practice, you’ll be ready to face those monster bucks hiding out in those shotgun states and maybe find your own place in the record books.

How to Find Deer – The Basics of Scouting

What is a Muzzleloader?