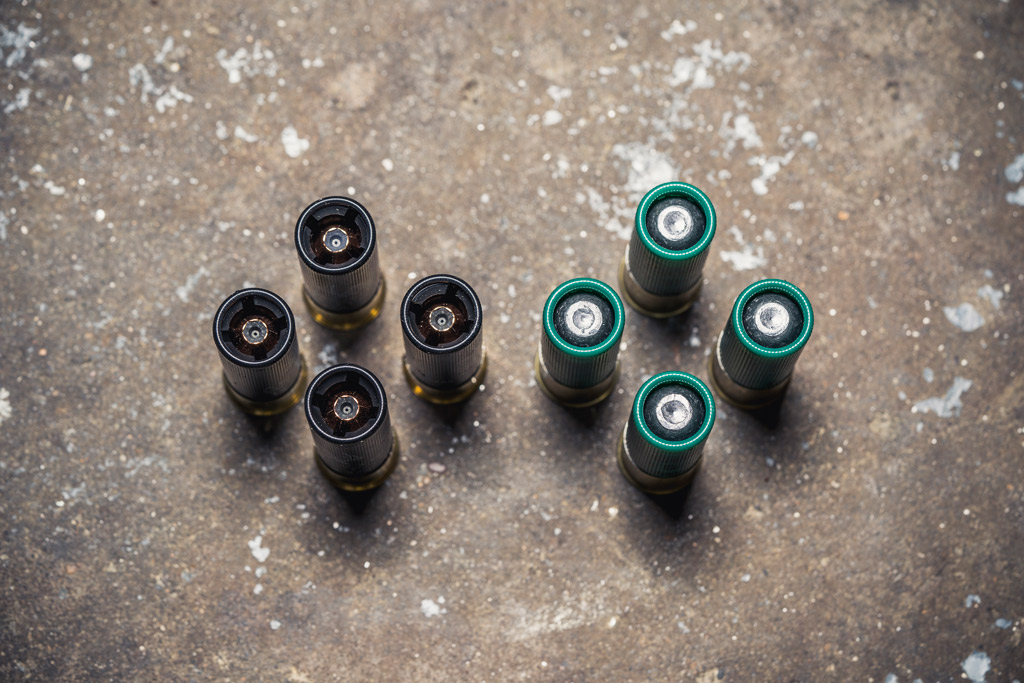 Are you ready to start deer hunting? If so, then you’re going to need to understand the basics of slugs, including the differences between the two main types – rifled slugs vs. sabot slugs.

What is a Slug?

For anyone new to shotguns, it helps to start with the basics. In this case, that means defining a slug.

Most shotguns are loaded with shot, which is essentially a bunch of small pellets or balls that spread out when fired. Those pellets “pattern” and cover a large area which increases the chances of hitting the target. This spread is especially important when aiming for a moving target, such as a flying duck, pheasant, or clay pigeon.

A slug, however, is basically a bullet for a shotgun. Slugs are solid, single-projectile bullets that, while not having the “spread” of shot, strike the target with a much greater force, delivering deeper wound channels. Slugs are generally used for medium-sized game, especially whitetail deer and similar-sized game.

So, What’s a Rifled Slug?

As the name suggests, rifled slugs have slightly angled grooves on the side of the body. Karl Foster originally invented them. That’s why rifled slugs are sometimes called “Foster slugs.” They are designed to be fired through smoothbore shotguns (barrels without internal rifling), allowing deer hunters to use their bird guns to harvest deer.

Rifled slugs do cause the projectile to spin, but it’s not enough to create a noticeable gain in accuracy. It’s commonly assumed that because rifled slugs have angled grooves (and because the word “rifle” is in the name) they create the same type of spin that makes rifling so accurate. This is simply not true. Rifled slugs do spin, but the rotation is so small that it does not actually make a noticeable different in flight trajectory.

The video above provides a good demonstration of the performance between rifled and unrifled slugs fired from smoothbore barrels. As you’ll see, the difference is minimal.

So why use rifled slugs at all? The groves in the slug actually allow the projectile to fit through different chokes. This allows hunters to use various barrels and still fire slugs. Without the grooves, the slug would cause greater friction in the barrel and would not function in various choke sizes.

Can I Use Rifled Slugs in a Rifled Shotgun Barrel?

In almost all cases, you should only use rifled slugs in smoothbore barrels. If you have a rifled shotgun barrel, you’re going to want sabot slugs. It’s counter-intuitive to what the “rifled” slug name suggests and while it may not be a catastrophic failure, you could damage the grooves in your rifled shotgun barrel.

Sabot slugs are quite different than rifled slugs. Instead of simply loading a slug into the shell, sabot (pronounced “say-bo”) slugs are fitted inside a small plastic cylinder that covers the projectile on all sides but the front. It’s sort of like a wad surrounding birdshot. This little package of projectile and plastic cylinder is then loaded into the shell. When fired, the plastic container spins inside the barrel; the barrel’s rifling imparts spin to the slug.

When the slug is ejected from the barrel, the sleeve is released and the slug continues downrange, maintaining a spin as it travels. Like a spiral from a quarterback, this spin enhances the accuracy of the projectile and increases the effective range.

Can I Use Sabot Slugs in a Rifled Barrel?

Definitely, a sabot slug should always be used in a rifled shotgun barrel. You can also use sabot slugs in a smoothbore barrel but most hunters see it as a waste of money to do so. You’ll get less than optimal performance.

So What’s Better for Hunting – Rifled Slugs vs. Sabot Slugs?

Comparing these two loads is difficult because the choice is largely dependent on what shotgun you already own. Yes, you can purchase a different firearm or change the barrels, but if you already own a smoothbore, you’re going to go with rifled slugs, and if you own a rifled barrel, sabot is your choice.

However, we can still look at the two and make some fairly consistent comparisons.

Sabot slugs have two factors that make them slightly more expensive than rifled slugs. First is the more complex design. With the sleeve, sabot slugs feature more components and take a few more steps to assemble, which drives up the price. The other factor is that because the slug itself does not come into contact with the barrel, it can be made from virtually any metal, including more expensive coppers and alloys. Rifled slugs are usually made from cheaper, softer lead.

When it comes to velocity, the stats are entirely depended on the primer, propellant, slug design, and other factors. The fact that the slug is either rifled or sabot has virtually no difference on velocity. That said, sabot slugs are often loaded into premium rounds, so they are tend to be loaded at higher velocities; you may find that sabot shells are faster, but this is not because of the slug itself.

Because of the same reasons stated above, you will usually find that sabot rounds are stronger in energy. Again, this is not because sabot slugs have an inherent design that creates better energy, but because manufacturers often load them as premium rounds. Remember, you’re likely paying for this increased performance too – so there is give-and-take with everything.

Rifled slugs and sabot slugs are two very different products, and when it comes to trajectory, one has a clear advantage. Because of the significant spin (which is actually caused by the rifled barrel, and not the slug itself), sabot slugs will have straighter trajectories in general compared to rifled slugs.

Shotguns are not typically used for long-distance shots, but the accuracy may be noticed when you need to place a slug at the vitals of a deer or another game animal.

Bottomline in the Rifled vs. Sabot Debate:

If you already own a shotgun, your choice is largely dictated by the type of barrel you have. However, if you desire slightly better accuracy, you should probably choose a sabot slug. Also, you’ll want to check regulations in your state, as rifled barrels (which require a sabot slug) are prohibited for hunting in some areas.

No matter which you choose, however, you’ll have an effective round that can harvest some of the most impressive deer in the field.