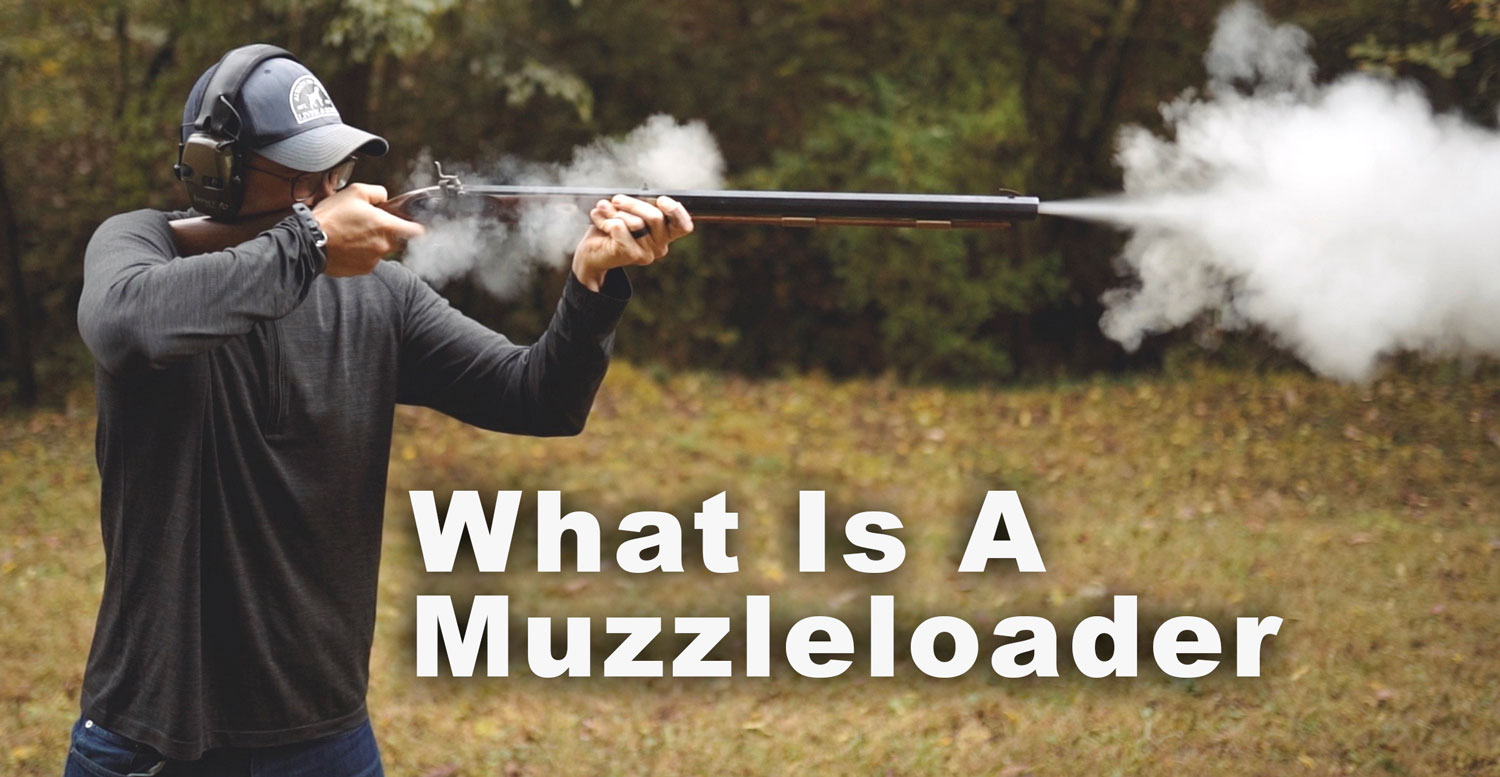 Some muzzleloaders feature technology that’s centuries old but in today’s world they offer hunters an experience you won’t find anywhere else. What is a muzzleloader and is it something you should consider for your next hunt?

What is a muzzleloader?

Simply stated, a muzzleloader is “a firearm you load through the muzzle.” 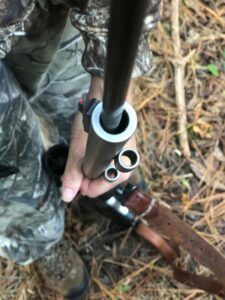 For a more technical definition consider this:

A muzzleloader is any firearm a shooter loads by pushing a projectile (and usually the powder charge) through the muzzle (the forward open end of the barrel). This loading method is the key difference between muzzleloaders and most modern firearms, which are loaded from the breech (or rear).

Note: We often refer to muzzleloaders as “blackpowder rifles”, since they typically use blackpowder rather than the smokeless powders used in modern ammunition.

The flintlock mechanism emerged in the late 1600s and was used on muskets, pistols, and rifles for several centuries. When you pull the trigger on a flintlock firearm, a hammer holding a piece of flint falls against a steel frizzen. The frizzen is positioned above the priming pan which contains a small amount of powder. When the flint and steel collide, they generate a spark. The spark ignites the powder in the priming pan, which then ignites the main powder charge in the barrel. The act of combustion builds pressure behind the projectile, pushing it through the barrel, out the muzzle, and toward the target.

Flintlocks performed horribly in wet weather. If the components became damp, the weapon was prone to misfire.

The caplock mechanism, (also called percussion lock or cap and ball) was developed to improve weapon reliability in damp or humid conditions. Introduced in the early 1800s, caplocks use a percussion cap that contains a volatile chemical compound called mercuric fulminate. This cap is placed over a hollow metal “nipple” at the rear end of the barrel. This tube extends into the barrel.

When you pull the trigger on a caplock, the hammer strikes the cap, causing the mercuric fulminate to explode. This small explosion sends flames through the tube and into the barrel. The flames ignite the main powder charge, and the projectile is thrust forward through the barrel. 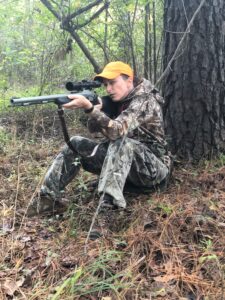 Like most things in the world of firearms, definitions can be blurry. There are no hard and fast rules for terminology, and specific definitions may vary depending on who is doing the defining. The same is true with the definition of “muzzleloader.” When it comes to what constitutes a muzzleloader, shooters generally fall into one of two factions: traditionalists and hunters.

What is a “Traditional” Muzzleloader?

Traditionalists value the historical significance of the muzzleloader. They consider the flintlocks that won the American Revolution and charged early westward expansion to be the only true blackpowder rifles. Most will be slightly more open-minded, expanding their definition to include the caplock rifle that replaced the finicky flintlock in the early 1800s.

These time-honored weapons are hard to shoot and even harder to shoot accurately. Follow-up shots are nearly impossible due to the lengthy process of reloading. Not to mention, the necessity of waiting until the smoke clears to see if you even hit the target.

Hunting with a “traditional” muzzleloader can be complicated and challenging. Most states consider muzzleloaders primitive weapons and give them a special muzzleloader season. These special seasons usually begin well before the regular season, when game haven’t experienced tons of hunting pressure. For deer hunters, muzzleloader season often coincides with the rut, meaning this season is prime time for hunting big bucks.

Modern muzzleloader hunters will tell you that 200-yards or so is about the limit for hunting whitetails with a muzzleloader.

It’s not uncommon to see 2000+ feet per second muzzle velocities from a modern set-up. Not bad, right? Of course, you’re going to get closer to the 2600 fps ballpark with most 150 grain .308 hunting ammo these days, but 2000 fps is still formidable. Remember, it’s not uncommon to pack a 250-grain bullet into a muzzleloader.

Other factors, like wind drift can play a huge factor in your potential accuracy with blackpowder rifles.

For example, Bryce Towsley found a 10 mile per hour wind led to nearly 11-inch drift with a 250 grain Barnes projectile in his piece for OutdoorLife.com. (At 15 miles per hour, drift pushed to more than 16 inches at 200 yards!)

That said, many black powder hunters keep it as primitive as possible and fire ball ammo out of their muzzleloaders for hunting.

Modern Hunters and the Inline Muzzleloader 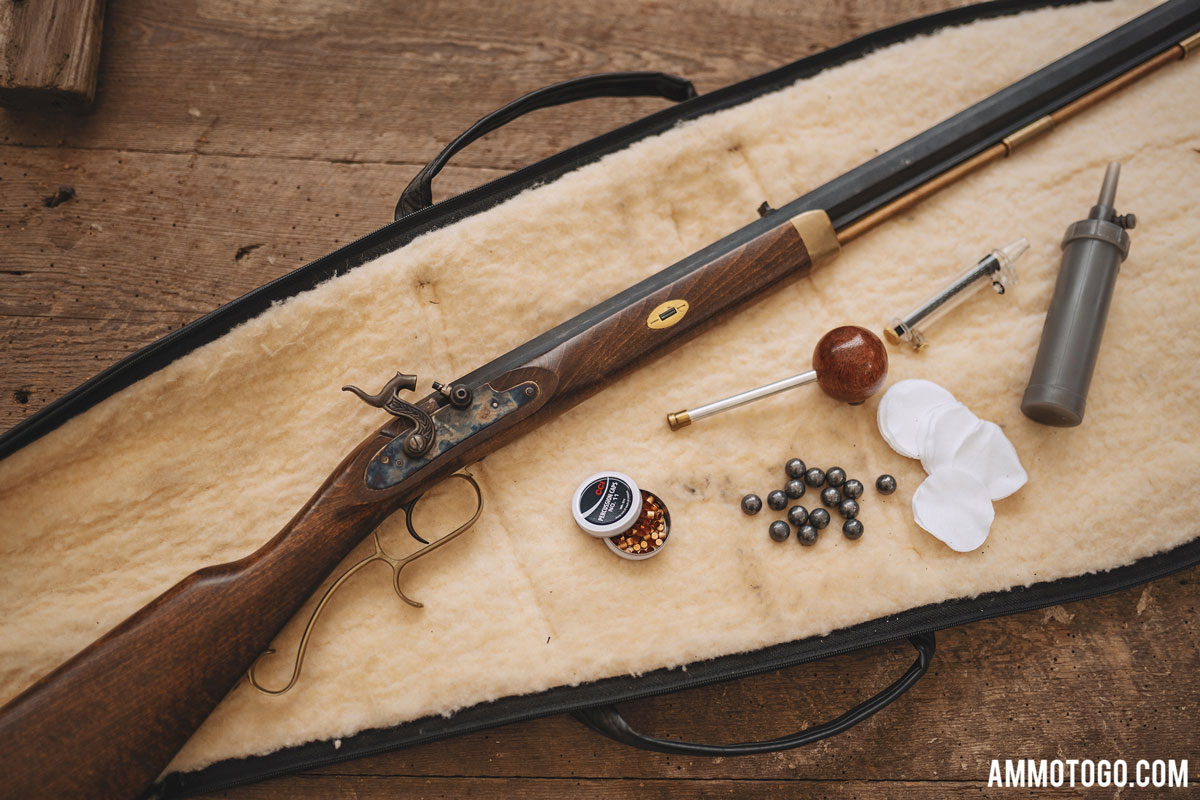 The other faction is the modern hunter. The modern hunter is typically less concerned about tradition and historic authenticity. Many of these hunters seem mostly interested in legally hunting one more season. This is especially true when fewer hunters crowd the woods that season. That means less game pressure and a season that coincides with rutting monster bucks.

When Tony Knight revived the inline muzzleloader in the 1980s, hunters suddenly became more interested in muzzleloaders. As they realized the potential for a booming market, more manufacturers jumped on board the inline train and began producing reliable, easy-to-clean, and good-looking modern muzzleloaders.

These guns had the same look and feel of their familiar hunting rifles. The regular safety, trigger, and cocking mechanisms were located in all the familiar places. These modern muzzleloaders significantly reduced the learning curve for hunting with blackpowder. 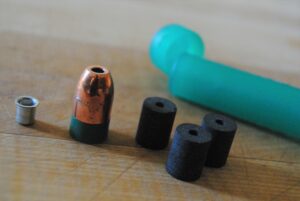 These newfangled weapons were also much more effective for bringing down game. Most shooters fit them with barrels delivering a faster twist rate than traditional flintlock rifles. They also allow hunters to toss the old musket ball for a heavier slug or sabot style projectiles. With tighter rifling and a ballistically superior bullet design, modern inline muzzleloaders deliver deeper penetration and extend the weapon’s effective hunting range. Also, with an uncluttered top line, modern hunters began mounting modern optics on their muzzleloaders.

Eventually, the muzzleloaders venturing into the woods during special “primitive” weapons seasons looked nothing like the traditional blackpowder weapons once carried by Daniel Boone, Lewis and Clark, and Davy Crockett. 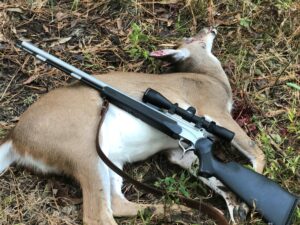 However, the first muzzleloading inline action was patented back in 1808. The design just didn’t catch on because they were harder to fix in the field. One could easily argue an inline muzzleloader is indeed a traditional muzzleloader. It is, after all, loaded from the muzzle. 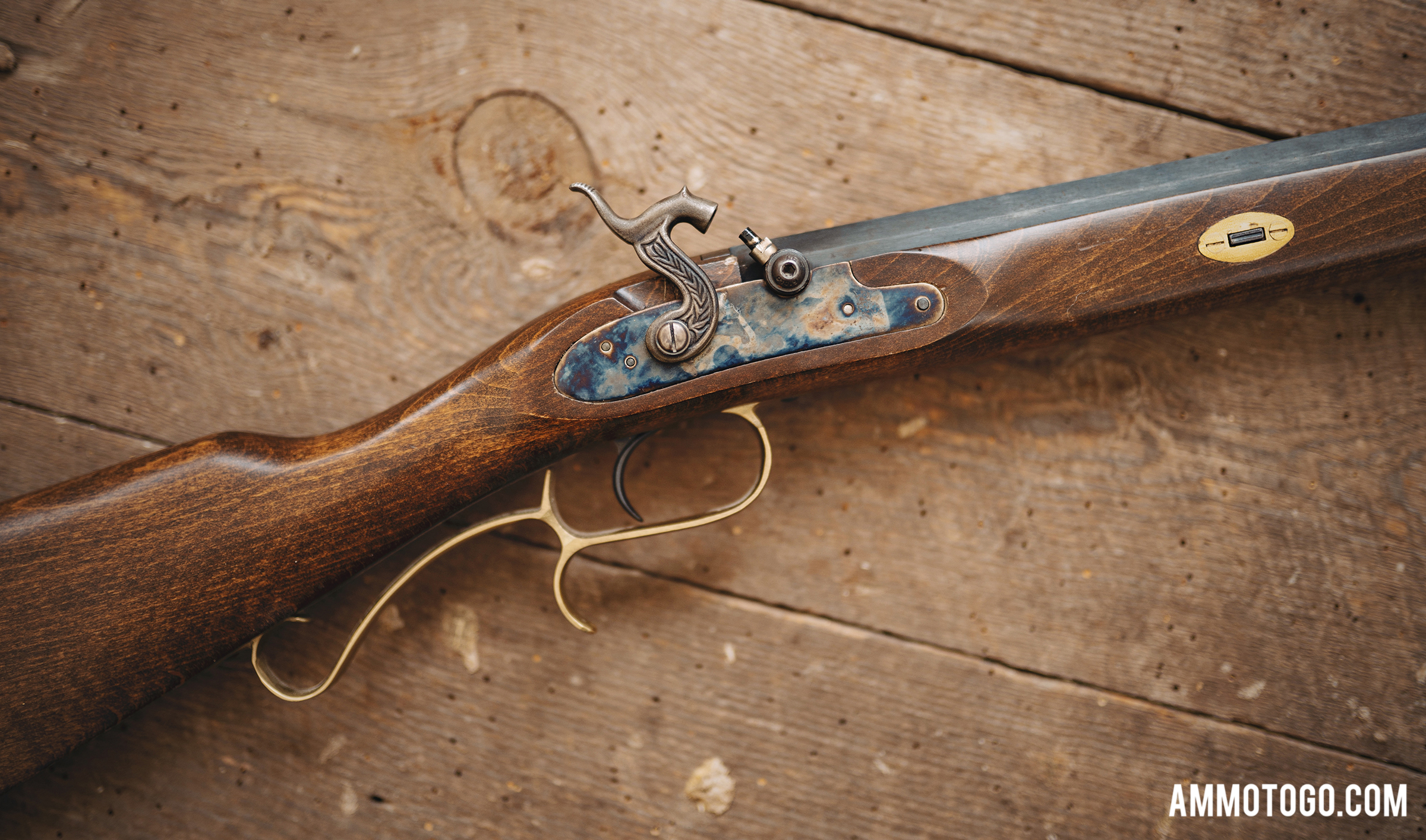 The problem is, many newcomers to blackpowder hunting (myself included) don’t understand or appreciate the hard work traditionalists put in to establish special muzzleloader seasons. Now, we get to waltz into the woods with a modern inline and hunt the same season they fought to establish.

I admit it isn’t fair. I will gladly stop and apologize to any traditionalist I see in the woods during muzzleloader season. The problem is, I never get to see one…or anyone for that matter.

There are so few hunters in the woods during the early primitive weapons seasons, I rarely bump into anyone. That’s the beauty of hunting with a muzzleloader. Whether it’s a modern inline rifle or traditional caplock. There’s plenty of elbow room (and plenty of unpressured game), out there.

Getting Them Started – Deer Hunting for Kids

How to Find Deer – The Basics of Scouting