It’s not a switch a lot of hunters were happy about – moving from lead shot to steel. No matter how you feel about the regulation, if you want to hunt legally, you’re going to have to adapt to using more steel pellets in your shotgun ammo. Read on to find out how you can adapt and why supporters say less lead shot is necessary.

Lead vs. steel shot is a somewhat controversial topic among shotgun shooting hunters. Since scientists determined that even the smallest trace amounts of lead can be detrimental to humans, animals we hunt and the environment, more and more areas are restricting the use of lead shot.

In fact, Federal law in the United States prohibits the use of lead shot for hunting waterfowl.

Today, the prohibition against lead shot by environmental and other government agencies across the country is becoming more commonplace for upland game as well. That means you can’t use lead shot to hunt turkey, quail, pheasant, and grouse in many areas. If you want to hunt legally, you’re probably going to have to adapt to steel shot – even if a lot of hunters are critical of the regulations.

In 1983, Canadian geochemist, Jerome Nriagu published his theory that the Roman Empire’s demise was caused in large part because of lead poisoning to the ruling class. His theory stated that the food, wine, and water of the Roman elite contained lead, which over time cause detrimental health issues such as gout, brain and nerve damage, brain or nerve damage, intellectual disability, insanity, birth defects, and even infertility.

Nriagu theorized that lead entered the Romans’ diet through their cookware and their extensive and highly advanced drinking, cooking, and bathing water transportation system. Pipes along the aqueducts were made of lead and so were the inner linings of their pots, over time contaminating ancient Romans’ food and drinking water.

Let’s not forget, lead is a byproduct from mining silver ore, which, next to drinking wine and conquering Europe, the Romans also extensively performed. Though, the idea that the entire Roman Empire fell because of lead poisoning has been debunked by other researchers. There were many factors at play which led to their demise. Nonetheless, we know for a fact from modern research that lead, in even small trace amounts, is detrimental to the human body and the plants and animals that we consume.

Believe it or not, Roman physicians knew of the dangers of lead consumption. Society has known that lead is poisonous to the human body for centuries, depending on geography and the specific society.

The first U.S. Federal laws against the use of lead in various forms were put in place in 1971 through the Lead-Based Paint Poisoning Prevention Act (LBPPPA). In 1978, the federal government banned consumer uses of lead paint, and then in 1990, amendments were made to the Clean Air Act of 1970, where lead was banned from gasoline.

Full regulation was not required until 1995, which gave gasoline companies five years to completely phase out lead. Even though lead has been legally prohibited in all consumer products, including water, lead poisoning is still a serious public health issue. Look at the 2016 Flint, Michigan Water Crisis. Several of Flint’s citizens, including children, suffered lead poisoning from a contaminated city water system. 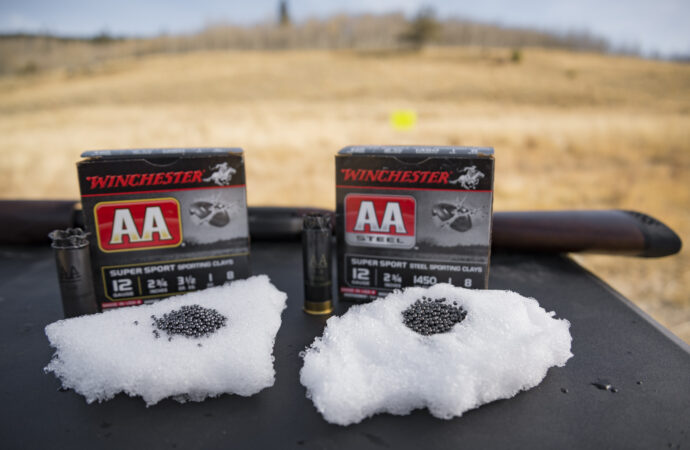 Federal Law prohibited the use of lead shot specially for hunting waterfowl in 1991. This was done to prevent potential lead poisoning to waterfowl and to their habitat, which is most often also our water supply. Another concern is that waterfowl ingest lead as they eat from the ground onto which the lead was shot, poisoning them as well. Lead does not break down like steel. It remains in the environment longer, with potential to poison waterfowl and their habitat.

Since steel has replaced lead, the reduction in lead poisoning can be summed by this quote by from Ken Richkus, chief of the Branch of Population and Habitat Assessment in the Division of Migratory Bird Management at the U.S. Fish and Wildlife Service, “We’re looking at about a million to a million and a half ducks a year, in general, that do not die from lead poisoning due to the ban on lead shot. That’s relative to what we saw in the 1980s.” 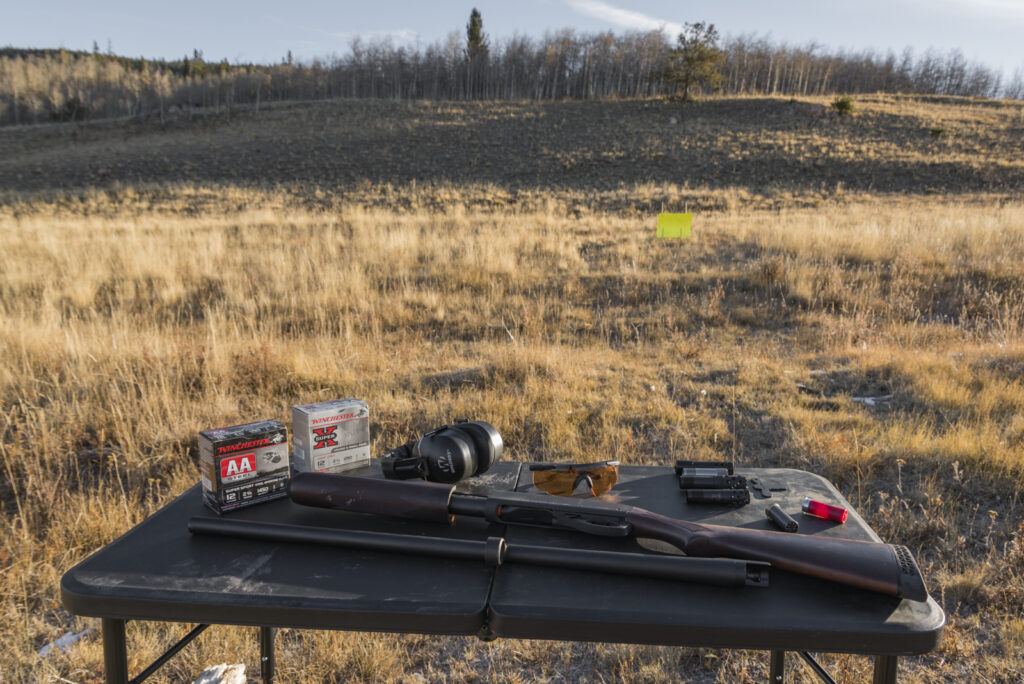 The prohibition of lead shot led to the development of non-toxic and faster biodegradable shot alternatives, such as steel.

The most obvious advantage of steel shot is that it does not poison the environment, the game you hunt, and in return, people.

One disadvantage with steel is that a steel pellet is about 1/3 lighter than a lead pellet of identical size. Therefore, steel pellets can lose momentum over a longer distance. This causes them to not penetrate their target as well, resulting in wounded game that suffers.

One way you can adjust is to use shot one or two sizes larger, so that the pellet has more weight and thus will travel farther. Although, adjusting to a larger pellet size means you have fewer pellets per shot. This potentially enables the game to slip between pellets and escape, or be hit by fewer pellets, again resulting in only wounded game.

Steel is much harder than lead. This allows the pellets to not be compressed by the firing action of the gun, which in return maintains their spread in a tighter pattern up to a certain distance. This provides a higher possibility for hitting your target. Though, without the ability to spread the pattern, you could adjust your pattern by moving to a more open choke, such as an improved cylinder or modified choke.

Most manufacturers never recommend using a full choke with steel shot. The compression of the hard pellets can actually cause too much pressure on the barrel muzzle, potentially leading to damage or even an explosion. However, as I mentioned, steel shot maintains a tighter pattern, so a more open choke should work well for shots up to 50 yards.

In order to demonstrate the difference in the spread pattern between lead and steel shot, I performed a simple live-fire spread test. We set up two test groups, one lead and one steel. We fired Winchester 2 ¾ #8 shot with a 12-Gauge and modified choke at 30 yards.

The lead shot pattern had a wider spread with a more even coverage of pellets. The steel shot pattern held much tighter with the majority of the pellets clustered tightly in the center, even making one large hole.  The results of this test can be seen in the photos below.

Since steel is much harder than lead, the pellets are able to penetrate game all the way through more efficiently. With a clean solid shot, this enables the game to bleed out faster and more humanely. Being soft, lead can mash up inside and become stuck in the game upon impact, not allowing for as deep a penetration, thus potentially not dying as fast.

If the game does not die from the shot, the toxic lead pellets become imbedded in the game, poisoning the animal, and the meat for a future hunter to then kill and consume. This type of poisoning can also be passed onto its offspring causing birth defects, or causing the game to become infertile all together. These are the same toxic effects that could potentially play out in a human.

In order to demonstrate the difference in penetration and destructive forces between lead and steel shot I performed a simple test by shooting targets that seemed to be a good medium for density and material and was most fit for the fall season: two pumpkins of similar size and weight. Again, I shot one lead and one steel round of Winchester 2 ¾ #8 shot at each pumpkin with a 12-Gauge and modified choke at 30 yards.

The lead shot spread more and did not create as big of an exit hole as a lot of the pellets were trapped inside the pumpkin material. The lead pellets did however knock the pumpkin end over end; most likely from the force of the pellets stopping in the pumpkin and transferring its forward motion into it.

The steel shot held a tighter pattern and made an exit hole almost as large at the entry hole. This pumpkin held it’s ground and was not knocked over like the lead shot pumpkin. This was due to the steel pellets making their way completely through the pumpkin and not transferring its forward motion to the pumpkin itself. The results of this test can be seen in the photos and videos below.

One of the arguments from some in the hunting community against hunters being forced into using steel shot for waterfowl and other birds is its higher cost. One extension of this argument is that this higher cost in ammunition will cause overall hunting cost to go up, causing people to hunt less, which in return will create less revenue for wildlife conservation efforts.

On the other hand, if lead levels in game and other wildlife rise so high that a large majority have toxic, even deadly, levels of lead poisoning then more revenue will be needed to help wildlife conservation efforts deal with poisoned game.

Conclusion – Adapt or Become An “Outlaw”

As state and county environmental and wildlife conservation agencies across the country have prohibited the use of lead shot more and more, even for upland (non-waterfowl) game, and continue to do so, hunters have had to adapt. This adaptation to using new chokes with new spread patterns and higher costs may be a change, especially for upland game hunters, as waterfowl hunters have been used to these changes for sometime.

Some argue that hunters couldn’t put enough lead shot into the environment to poison it and the game in which they hunt. Though studies show, because of the way lead does not biodegrade in a short time such as steel does, that it has a long lasting effect on the environment, wildlife of all kinds, and humans.

Change is inevitable, and after time has passed what has changed will eventually seem like the new norm, and as though it has always been this way.

Why and How to Use Shotgun Chokes