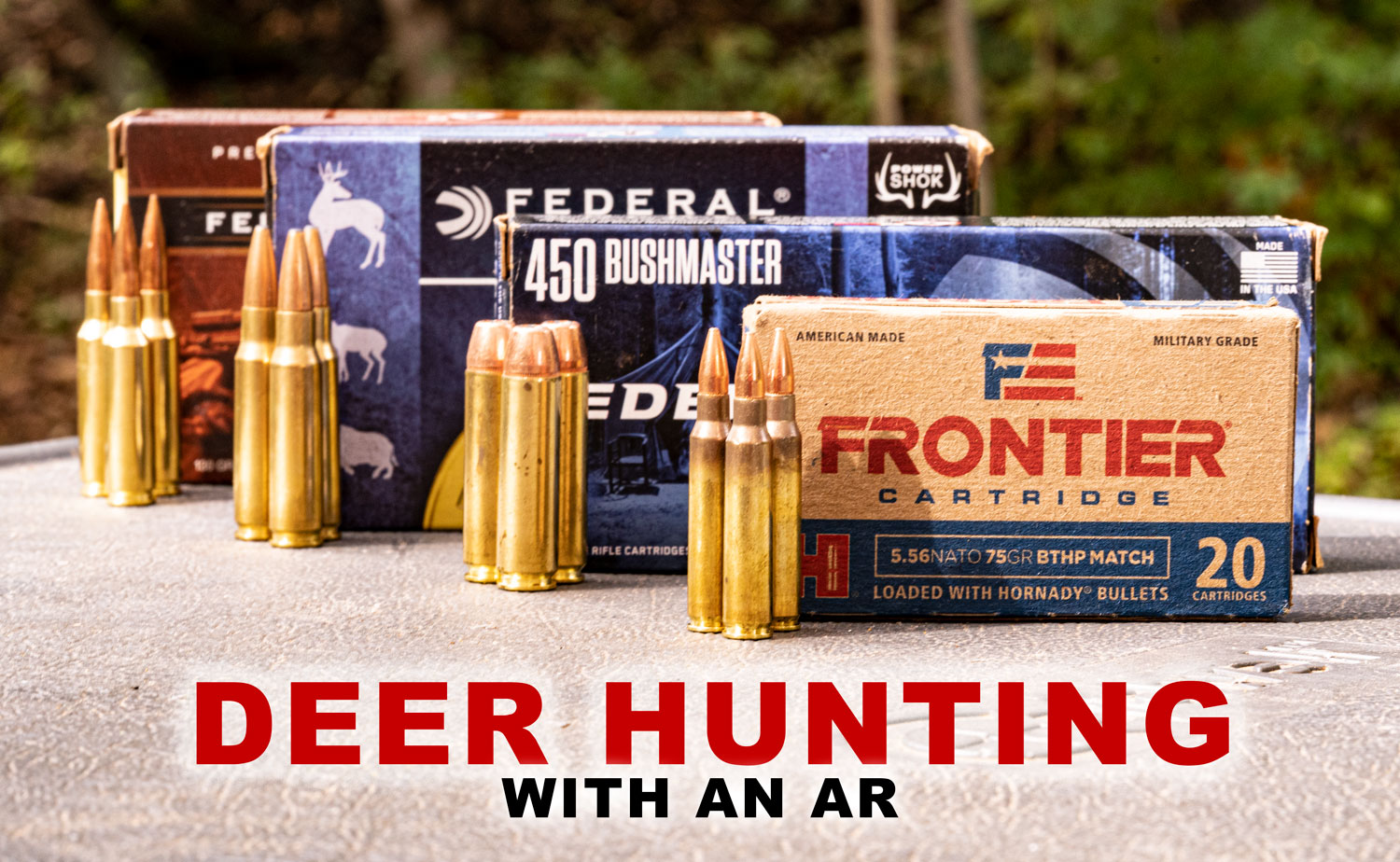 There are a ton of options out there for hunting with an AR-15 or other AR-style carbine. Let’s explore some of the more common calibers and why you might choose it over your other options.

You may have purchased your AR-style rifle for target shooting or competition, but did you know you have one of the finest platforms for deer hunting as well? With the right accessories, your rifle can become your favorite tool for harvesting deer. With about a dozen AR calibers for deer hunting out there, you’ll have little trouble delivering effective ballistics downrange! 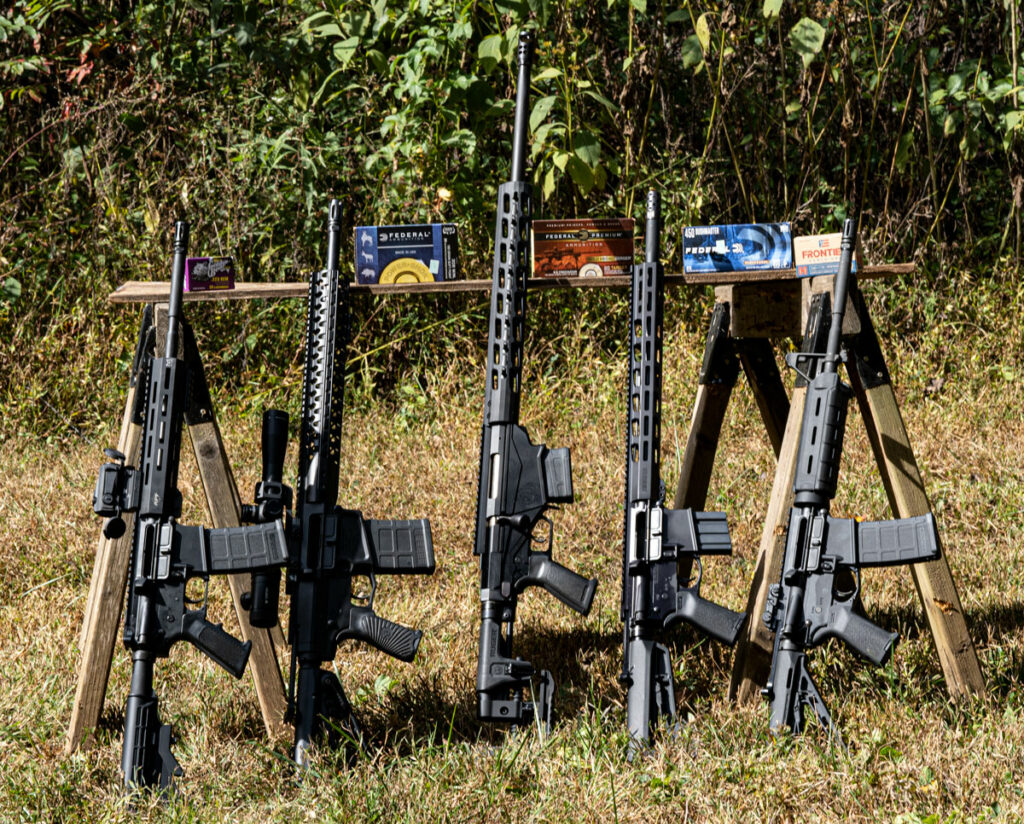 Deer Hunting with AR-Style Rifles: What are Your Options?

It’s the most common and popular round for the AR platform. The .223 Remington and its military counterpart the 5.56x45mm NATO, are versatile rounds you can use for multiple forms of hunting, including deer.

In most cases, shooters use this round for high-volume target shooting. It delivers accuracy and reliability at the range. You might also find that relatively rapid firing ability handy if you’re a hog hunter.

While sometimes considered too small for deer, the .223 Remington (which typically loads bullets around 55 grains) has rapid speed that allows it to deliver deep wound channels. With the right bullet type (an expanding round), hunters can use .223 Remington as an accurate option for deer. At greater distances, however, the .223 can loose power, making it less suitable for long-distance hunting.

Deer hunters who want an affordable cartridge along with flexibility (range and the hunting) will appreciate the .223 Remington.

Hunters who want balanced power and performance in a single cartridge should seriously consider adding the 6.5 Grendel to their AR platform. Alexander Arms developed this cartridge to deliver superior ballistics and terminal performance than the .223 Remington and .308 Winchester. (Whether it achieved that goal is still being debated.) Like many of the cartridges listed here, the 6.5 Grendel can be used in your AR rifle once you have a bolt carrier, barrel, and magazine built for this round.

The cartridge does not deliver the same level of speeds as the .223 Remington. We often refer to 6.5 Grendel as the middle ground between the .223 and .308. While it may not be a long-distance round, anyone hunting deer from a tree stand should be able to take down game with proficiency. 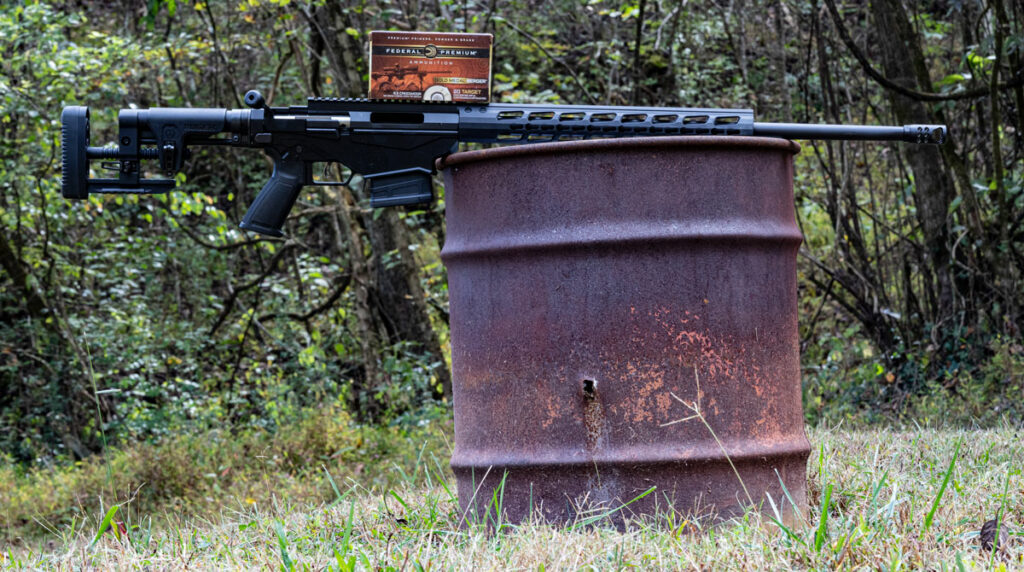 Hornady introduced 6.5 Creedmoor in 2007 for long-range shooting. It’s accurate, fast, and a deadly AR-platform cartridge that you can used to harvest deer at longer distances (For hunting, 600 yards. Targets? 1000+ yards).

Not only does the 6.5 Creedmoor deliver superior distance, it’s also considered to have a lighter recoil. So, less-experienced hunters may be able to use the round successfully. With the correct upper receiver, you can transfer your target rifle into a long-distance deer hunter thanks to the 6.5 Creedmoor.

Although it was originally intended for match competitions, the 6.5 Creedmoor is one of the hottest deer cartridges on the market. Much of this popularity stems directly from the available distance; many 6.5 Creedmoor products maintain energy over 1,000 foot-pounds well beyond 300 and even 400 yards, making it a reliable option for hunters in wide-open spaces.

When the United States military wanted to address perceived weaknesses in the 5.56x45mm NATO, they collaborated with Remington Arms. The result was the 6.8 Remington Special Purpose Cartridge, or “SPC.” With a bullet diameter of .277, this round sits between the 5.56 (.223) and the 7.62 (.308). It’s a well-balanced round you can load up with for a variety of hunts, including deer.

Most hunters consider the 6.8 Remington SPC a medium-range cartridge. It tends to have speeds slower than the .223 but faster velocity than the .308, while muzzle energy for this round is usually about 1,500 to 1,750 fps.

Since first hitting the shelves in 2011, the .300 AAC Blackout has gained widespread popularity. Like many cartridges for AR-style rifles, the .300 AAC Blackout was first developed for military purposes; in this case, to create maximum performance in a suppressed carbine rifle. This cartridge is very similar to the .223, but the neck has been widened to accept the .308 bullet.

The disadvantage for this cartridge is in velocity, as it is generally much slower than other rounds in this category. However, it delivers reliable terminal performance at short to medium ranges, making it useful for deer hunts, just not deer hunts that need excessive distance. 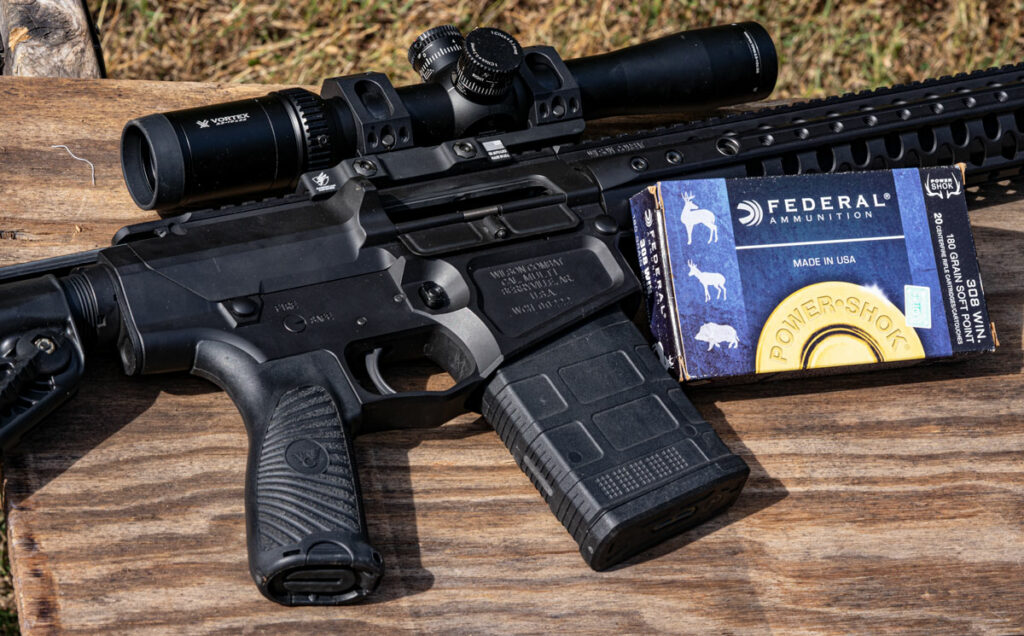 Similar to the .223 Remington, the .308 Winchester has military roots and a military counterpart. Unlike the .223, there is no doubtabout this cartridge’s ability to harvest deer. The .308 carries bullets weighing well over 150 grains, giving it tremendous knockdown power. It also has reliable distance, generally maintaining accuracy and energy beyond 200 yards.

Hunters who want a reliable cartridge that has decades of trusted use should consider adding the .308 Winchester to their platform.

If you live in a state where hunting with typical bottle-neck rifle rounds is prohibited, but hunting deer with straight-wall cartridges is legal, the .350 Legend is a prime choice. Winchester made this cartridge with deer hunting specifically in mind. It packs the performance and reliability you need for the fields and the woods.

This cartridge loads a bullet measuring .357 inches in diameter, which makes it wider, and often heavier, than many of the rounds we have discussed so far. This makes it ideal for deer hunting at medium distances, as it can deliver around 1,500 foot-pounds of energy at 200 yards.

Like the .350 Legend, the .450 Bushmaster is a straight-wall cartridge. This means it’s legal for hunters to use in many states where bottleneck rounds are illegal for hunting. It packs an even heavier and wider bullet, with projectiles as large as 300 grains in some products. This weight delivers devastating power to deer and other game animals.

The downside to this size, however, is lower velocity and greater drop. The muzzle velocity for this product tends to be around 2,000 feet per second; not slow, but there are certainly faster options. The downrange drop, because of the bullet’s weight and lack of speed, also tends to be more pronounced, making this a tough option for distance hunting. At shorter ranges, however, the .450 Bushmaster delivers tremendous energy, easily delivering an effective wound to a whitetail deer.

No matter what your hunting style, odds are good there’s an AR-style rifle out there that’s a good fit. No matter what you take to the field or woods, best of luck this year and keep us in mind when it’s time for ammo to bring down your next trophy buck!