Let’s explore the 450 Bushmaster – why would you use the straight-walled cartridge and what is it especially good for shooting?

The shooting community flocks to calibers for a bunch of different of reasons. It’s not uncommon that law enforcement drives the creation of a cartridge, which was the case for the .40 S&W.

Sometimes private gun owners want something new, which was the motivation for products like the .17 HMR. In other cases, laws drive the creation, or commercial success, of a cartridge, which was the case for the .450 Bushmaster.

The .450 Bushmaster is a straight-walled cartridge that is effective for hunting numerous game animals, including deer, elk, hog, and even some bears. But most importantly, the caliber is legal in states that do not permit traditional bottleneck cartridges.

Why is Straight-Wall Legal When Bottlenecks are Not?

As the name suggests, straight-walled cartridges, like the .450 Bushmaster and 350 Legend, have sides that remain the same diameter from front to back. If you look at the cartridge from the side, you will see a straight line from the rim to the end of the case; it will only start to narrow at the bullet. A bottlenecked cartridge, however, will taper down; its case diameter is larger than the bullet itself. (The most noticeable aspect of a bottlenecked cartridge is the “shoulder.”)

So, What’s a Bottleneck?

Essentially, a bottleneck cartridge will have more propellant behind the bullet, so it can fire at greater velocities, which translates into greater effective distances. However, this also increases the chances of over-shooting; if a hunter misses the mark, the bullet could travel downrange and potentially cause damage, injury, or even death. For this reason, bottlenecked cartridges are illegal for hunting in many states. Hunting areas are often dotted with farm houses, livestock and other structures, especially in the Midwest. As opposed to western states, which are generally more open and unoccupied, many Midwest states have made hunting with bottleneck cartridges like the .30-06 Springfield illegal.

This legislation may not be responsible for the creation of the .450 Bushmaster, but it has certainly added to the cartridge’s commercial success.

History of the Caliber

The .450 Bushmaster is part of the legacy of Jeff Cooper, a World War II and Korean War veteran with the Marine Corp who became a ballistics expert and firearms instructor. He founded the American Pistol Institute and created numerous principles of carrying, handling, and shooting a handgun. Among Cooper’s numerous contributions was the idea of a “thumper” round. Shooters use thumper rounds in semi-automatic rifles to deliver more power (although not necessarily speed) for large game animals.

Cooper never got beyond the concept, but the idea was picked up by different cartridge makers who, after various adjustments to the case length, finally released the round. Currently, only two manufacturers are producing 450 Bushmaster ammunition: Federal and Hornady.

Although using the cartridge for hunting had been off limits for years in many areas, recent changes to state legislation have made it a legal option for harvesting whitetail deer, which has significantly increased the cartridge’s use.

To help you understand the caliber’s performance, let’s take a look at the 250-grain FTX Hornady BLACK, a versatile cartridge that can be used for hunting and target shooting:

So, that’s what Hornady promises. What can you actually expect when you fire this ammo? We took two loads, Federal’s 300 grain Power-Shok and the Hornady Black to the range for some chronograph testing.

The graphic below shows the results when fired with a Ruger MSR equipped with a 18 5/8-inch barrel. 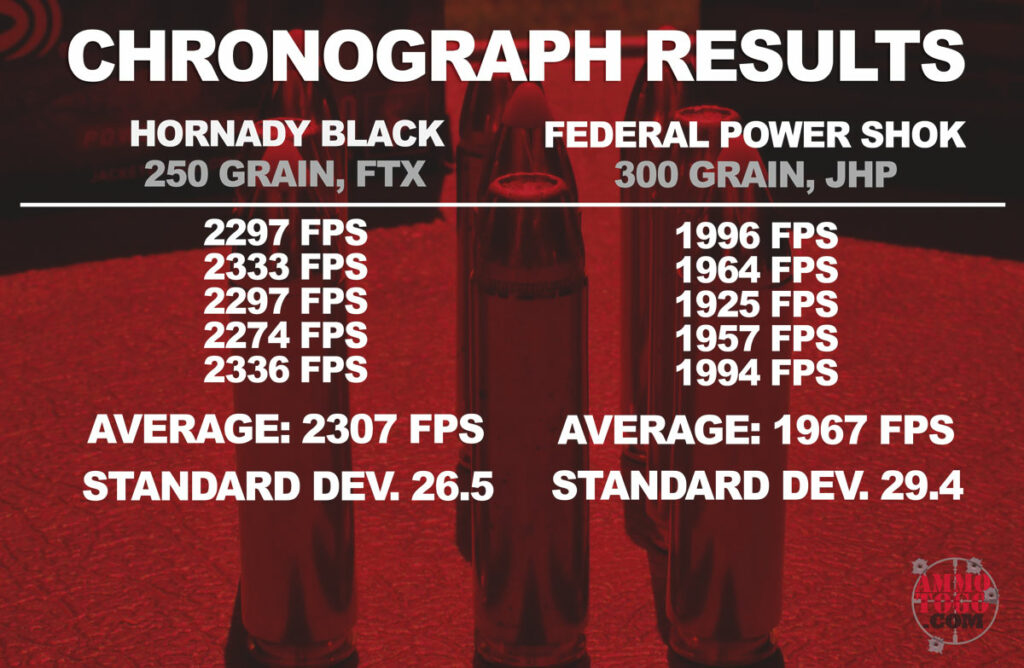 How Does It Stack Up?

The .450 Bushmaster is used for two specific sports: 1) medium to large game hunting, and 2) target shooting, including competition. For the most part, shooters want to know how it compares to other straight-walled rifle cartridges, as these are the choices for many hunters. However, it’s also worth comparing the cartridge to other rounds that are used in high-volume target shooting.

Ballistically, these are two very similar cartridges, especially when you consider that the .450 Bushmaster can be purchased with 300-grain bullets, just like the .45-70 Government. To give you an apples-to-apples comparison, we can look at the Powershok products from Federal Premium Ammunition, which are available in 300-grains for both cartridges. (The only difference is .45-70 is JSP, while .450 is JHP.) We see very similar muzzle speeds, with both sitting right near 1,600 fps. We also see similar energy, with both near 1,700 foot-pounds. The .45-70 is slightly higher in both stats, but most shooters will barely notice. Downrange, we see the same pattern, with the .45-70 holding a slight, but not significant, advantage. The real difference is the types of firearms you can find in each. The .45-70 Government tends to be used in lever-action rifles like you’d see in a John Wayne Western film. Meanwhile, we see the .450 Bushmaster in semi-automatic AR-style weapons as well as bolt-action rifles.

Because the .450 Bushmaster is used primarily in AR-style rifles, I believe it’s worth comparing this round to the .223 Remington. Shooters predominantly use 223/5.56×45 in AR-styled carbines. The .223 is a lighting-fast cartridge that delivers blazing muzzle velocities over 3,000 feet per second, far outpacing the .450 Bushmaster.

However, the .450 is clearly the winner in downrange ballistics, as it maintains energy over 1,000 foot-pounds after 200 yards, while the .223 Remington, with a much smaller bullet, drops below 700.

Most of us wouldn’t consider the 450 Bushmaster a long-distance cartridge by design. However, you can reach out with it. Most responsible shooters and hunters will give it an effective distance of about 250-to-300 yards for most medium-sized game.

If you want to target shoot and hunt larger game at greater distances, all with the same rifle, something fitted for the .450 Bushmaster is an ideal choice. Of course, with today’s technology, you can purchase an upper unit for your AR-style rifle and use the same base for both cartridges.

If you live in a Midwestern state with laws against bottlenecked cartridges, but still want to hunt medium and large game like deer, feral hog, or black bear, the .450 Bushmaster will likely be one of your best options. Laws can change, but for now the .450 Bushmaster could be the only available cartridge that delivers the power and distance you need.

With this cartridge, you can have a large-game rifle that is both lethal and legal!

Are Magazine Loaders Worth the Investment?