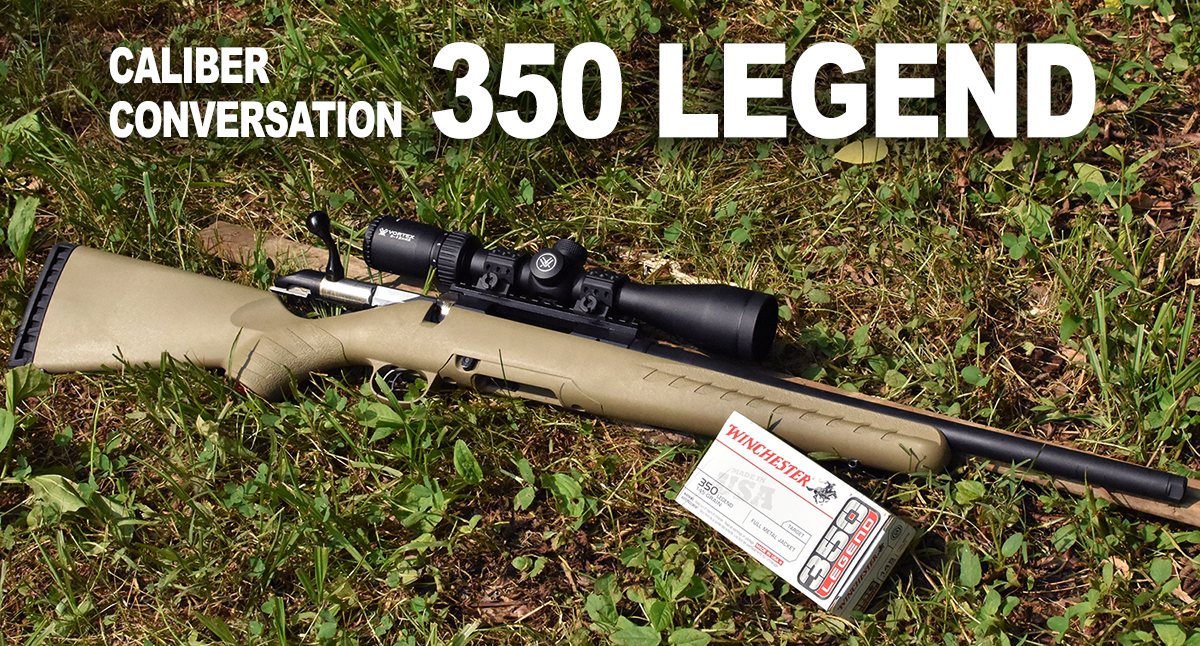 Winchester’s new 350 Legend caliber is picking up a lot of early buzz. So, what’s the big deal about the straight-walled cartridge?

Ammunition designers release new products every year, and most reach the consumer market with hardly anyone, at least outside the industry, noticing. But one cartridge, the 350 Legend created by Winchester, has caught the attention of gun owners, especially deer hunters in Midwestern states.

We started carrying 350 Legend ammo in April 2019 due to a ton of requests for the caliber.

Why is it generating buzz? Because this straight-wall cartridge promises to perform like a typical rifle round while delivering smooth recoil and advanced terminal ballistics. 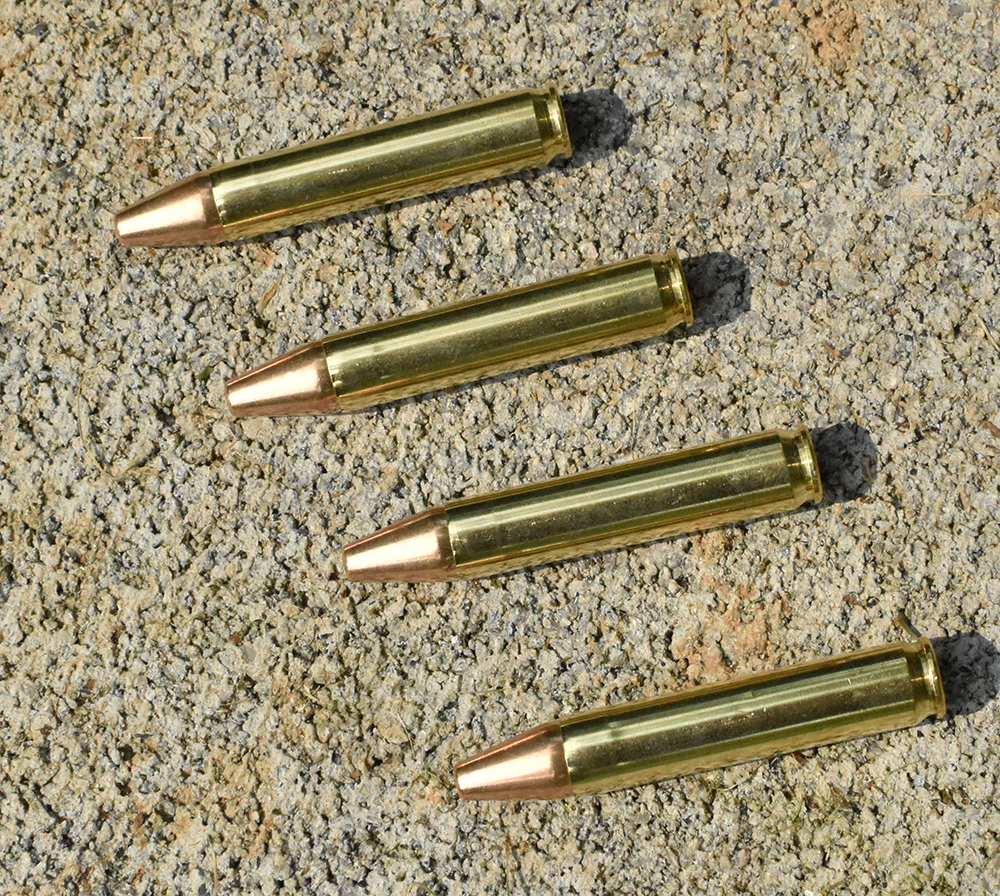 The fact that 350 Legend is a straight-wall cartridge is an important distinction. That straight-wall makes it legal for use in many states that generally don’t allow hunting with rifles. “Straight wall” simply means that the case, from front to back, has the same diameter as the bullet. There are no shoulders, angles, or bottlenecks on the casing; it is essentially a straight cylinder (excluding the potential rim) from front to back.

Compared to bottleneck cartridges, straight-wall cartridges generally have shorter effective distances, reducing the chance of overshooting a target. This increased distance in bottleneck rounds can be caused by many factors, but most specifically it is caused by the increase in propellant. When the case is wider than the bullet, you have more room for propellant, which means the bullet can be fired with greater velocity and energy.

Straight walls, however, pack less propellant, and therefore have less velocity, which means less distance from the bullet.

History of the 350 Legend

For this reason, many midwestern states have outlawed rifle hunting. Iowa, for example, has traditionally only allowed deer hunting with a shotgun, muzzleloader, handgun, or bow. But recent changes in the state law have allowed for rifles that load straight-walled ammunition. Ohio and Southern Michigan enacted similar legislation. Of course, there is potential for other states to make changes too.

The issue is that many of the straight-walled ammunition options didn’t offer the speed and performance that most hunters desire. Seeking to fill an obvious need, the developers at Winchester created the 350 Legend.

Winchester created 350 Legend with deer hunters in mind. It is based on the casing of the .223 Remington. Winchester loads these rounds with .357″ diameter bullet. By using .223 as their foundation, the developers at Winchester can use a case that is already available in mass production. This means the manufacturing process is cheaper, which in turn means that the ammunition itself will come with a lower price tag.

Cost aside, the goal was to achieve a bullet that has the ballistic performance of a traditional rifle cartridge with less recoil than many of the hard-hitting brutes of the straight-wall variety.

To help understand the 350 Legend, let’s look at the ballistics of the Winchester Super-X load:

350 Legend vs Other Straight-Wall Cartridges

The 350 Legend will be used primarily in states that do not allow typical rifle cartridges but do allow straight-wall ammunition. Therefore, most hunters and gun owners will want to know how the cartridge stacks up against other straight-wall ammo, not necessarily how it compares to bottleneck hunting cartridges like the .308 Winchester. After all, someone in an area that can only use straight-wall cartridges won’t be concerned with the performance of bottleneck rounds, at least not for hunting.

With that in mind, we’re going to look at the 350 Legend and compare it to a few alternatives in the straight-wall category:

Compared to to .357 Magnum hunting loads, the 350 Legend tends to be faster, more powerful, and deliver straighter trajectories. The .357 Magnum generally has a reputation as a fast and powerful round, at least for handguns, but it can be slow compared to rifle rounds. As you can see from the statistics below, the .357 Magnum Super-X, also from Winchester, has less velocity and less energy. Also, if the rifle is sighted to 100 yards, the bullet drops over 16 inches at 200 yards. With the 350 Legend Winchester Super X, the bullet only drops 9.8 inches under the same circumstances.

Another popular straight-wall cartridge used for deer hunting is .45-70 Government ammo. This hard-hitting cartridge is capable of delivering outstanding energy, but because of the massive bullet (sometimes as high as 400 grains), it can be lacking in straight-line trajectory. As you can see from the stats, it has slower speeds than the 350 Legend, but maintains hard-hitting power, as high as 1,355 foot-pounds after 200 yards. 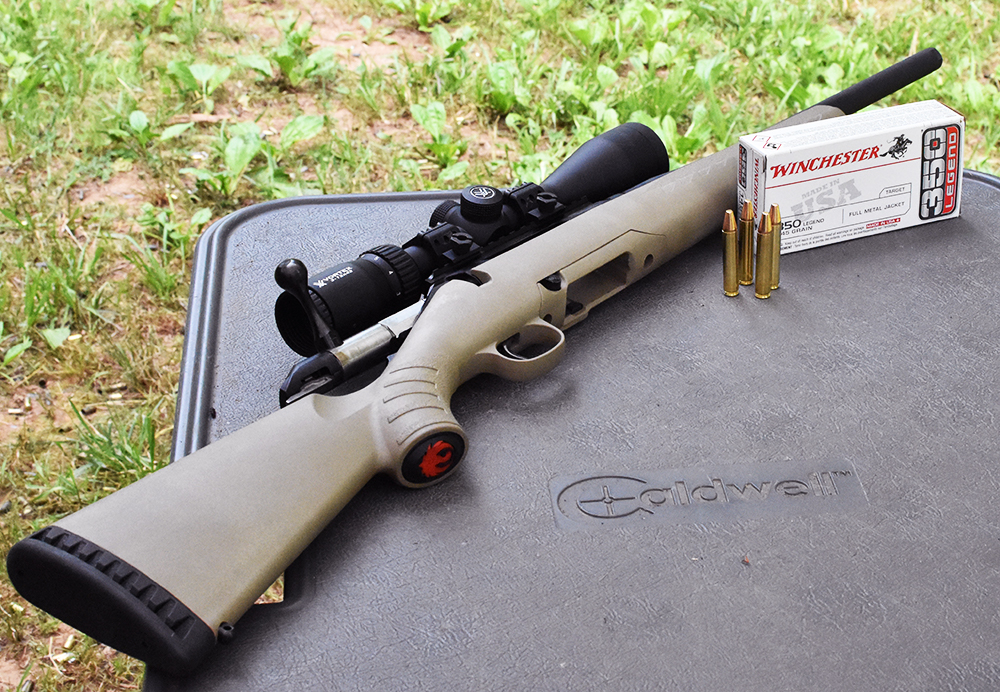 Manageable recoil without a significant reduction in performance is the top selling point for these cartridges. According to Winchester, the 350 Legend has more energy than many popular rifle cartridges, including the .30-30 Winchester, the .300 Blackout, and the .223 Remington. However, it also has less recoil than many of the high-powered straight-walled cartridges, such as the .450 Bushmaster. Compared to the .243 Winchester, it has 20% less recoil and 20% more penetration, according to Winchester. These well-balanced statistic could make the 350 Legend a popular choice for deer hunters all across the country.

Cost could also be an important factor for the 350 Legend. Prices can change drastically depending on how and where you buy, but because these cartridges are based on the .223 Remington case, a product that is already widely available, you can expect these cartridges to have a lower price tag. This could once again fuel the popularity of the round.

The Ruger rifle you see in our photos below is currently retailing for about $500. It can be tough to find. Also, there has been a lot of early interest in an AR-style 300 Legend rifle that Ruger is set to release soon. MSRP is reportedly closer to $1300 for that rifle but some shops are taking pre-orders closer to $900.

Will the 350 Legend Be Successful?

Ultimately hunters and shooters like us will decide whether this cartridge becomes a true legend. If hunters in Midwestern states with straight-wall-only laws try the cartridge, and prices for the round are able to stay reasonably low, it could become one of the more popular cartridges.

If you want to try the 350 Legend yourself, head to ammotogo.com and check out our current selection of top-quality ammunition at affordable prices.