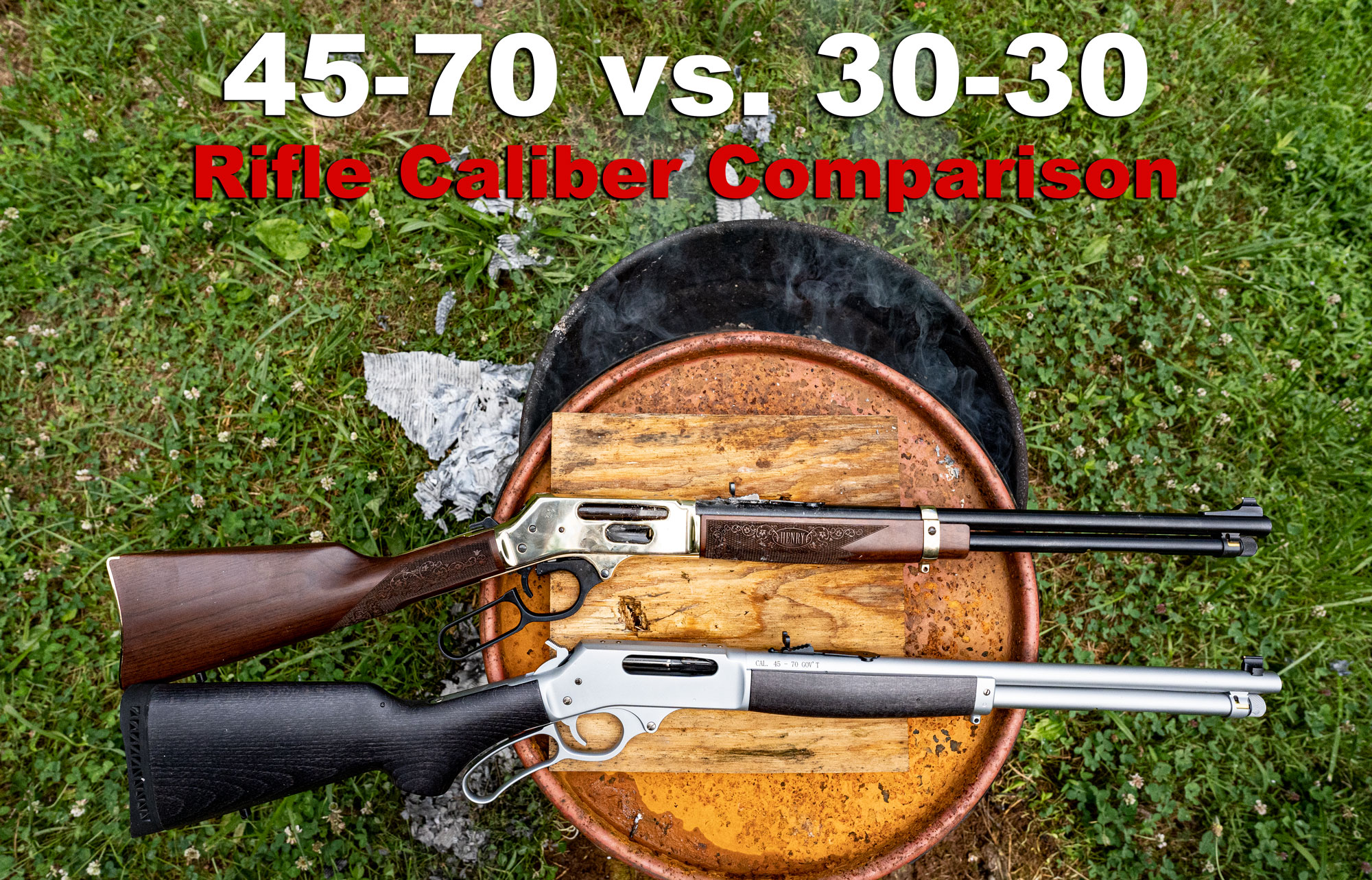 They may not be as technologically-advanced as modern semi-automatic rifles, but loading, cocking, and discharging a lever gun just…feels good. There’s really no better way to describe it. Hunting and shooting with a lever action rifle often seems more satisfying than any other pursuit.

If you are interested in a lever action, you have a lot of choices for ammo selection, but two of the most popular cartridges are the .45-70 Government and the .30-30 Winchester. Both are proven cartridges with over a century of use and both can deliver the performance you need from a lever action rifle. But if you only have the cash or the space in your safe for one of them, which should you choose in a 45-70 vs 30-30 contest?

Today, cartridges made for lever action rifles are used for private sporting purposes only; they are found on hunting grounds and target ranges. But the .45-70 Government was made for the battlefield. Seeking a flat-shooting, powerful weapon, the U.S. Army’s Springfield Armory developed the cartridge, which quickly became popular among sportsmen. With the right load, it can be used for some of the largest game in North America, yet can also be an enjoyable target cartridge as well.

Created for the famous Winchester Model 1894 rifle, the “thirty thirty” cartridge became popular for target shooting and medium-range, medium-size hunting. More powerful than most of the competition at the time, it proved a lightweight yet effective round that could be used for deer, black bear, and similar sized game. Thanks to an affordable price and versatile use, it became one of the most popular rounds in the country and remains an effective hunting option to this day.

These are not high-volume rifle cartridges; it’s unlikely that you’ll fire off close to a thousand rounds in a single afternoon, the way you might with a semi-automatic rifle discharging .223 Remington cartridges, for example. But even lever-action owners appreciate an affordable round. In this case it appears the .30-30 is significantly more affordable. At the time of writing this article, the most affordable .30-30 on our site was $.74 per round, while prices for .45-70 Government ammo bottomed out at well over double that amount.

Neither of these cartridges is considered a particularly fast round, but if velocity is a priority you will likely prefer the .30-30 Winchester.

We can look at comparable products once again to see this play out. The LEVERevolution rounds references above are a good example; .30-30 Winchester ammo has a muzzle speed of 2,400 feet-per-second (fps), while the 325-grain Hornady LEVERevolution .45-70 leaves the muzzle at 2,050 fps. There is also a 250-grain .45-70 LEVERevolution that has a muzzle velocity of 2,025 fps.

If you know a little about firearm physics, you can probably guess which one delivers more energy to the target. With heavier bullets, and speeds that are not far below the .30-30 Winchester, the .45-70 Government delivers much higher energies.

Again, there is some overlap, but the .45-70 Government remains a much stronger cartridge.

Accuracy depends on numerous factors, especially the skill of the shooter. A .45-70 in the right hands can be much more accurate than a .30-30 in the wrong hands. But the truth remains that the .30-30 generally has less downrange drop.

When using these cartridges for hunting, you will usually only place one shot; perhaps a secondary shot in rare situations. Even at the range, shooting is usually slow and meticulous, focusing on accuracy over volume. This means recoil is generally not as important. But it still matters to most shooters. Because the .30-30 Winchester usually has lighter muzzle energy, the felt recoil from these cartridges tends to be less severe.

Conclusion: Both are Fun, Powerful Cartridges

If you are trying to decide between 45-70 vs 30-30, you can’t go wrong. I may be slightly delusional but there’s something about loading up an ol-timey looking lever action and pretending to be John Wayne for an afternoon at the range. But these calibers are more than just accessories or stage props.

Both 30-30 and 45-70 offer a practical purpose as well. For hunting deer, black bear, and feral hogs, for example, either one will deliver the performance you need. However, if you expect to hunt at slightly longer distances, you may prefer the .30-30 Winchester, which is not considered a long-range cartridge but tends to have a little more reach than the .45-70. But if you might pursue larger game animals, perhaps the heavier, more powerful .45-70 Government would be a better choice.