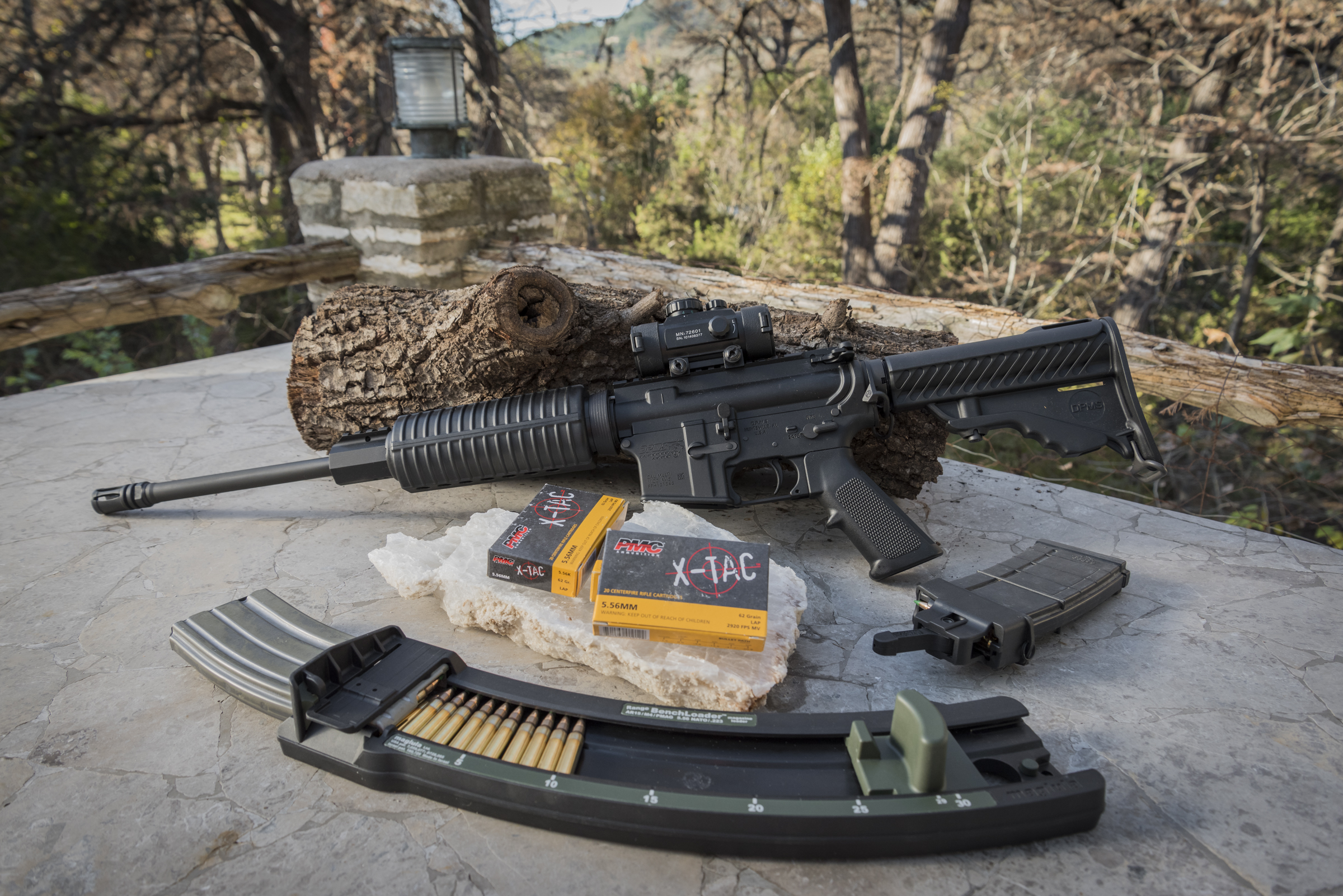 How much time can you save with a magloader? Is it worth it? We put a couple models to the test with some time trials.

Loading magazines by hand is time consuming and strenuous on the fingers and hands, especially when loading several magazines back to back. Also it’s sometimes easy to miss-load a round, creating a higher potential for jamming when firing. Someone who loads magazines often, such as an active duty soldier or even someone that does manual labor will have calluses in just the right places to help make the job easier. Though, someone that doesn’t load magazines often may find themselves with pain filled fingers after loading several magazines during a day of shooting at the range.

There is some technique involved in handloading magazines, though the only way to develop a good technique is with lots of practice, which is something your hands and fingers might not appreciate. The main benefit for loading magazines by hand is that it does not require carrying or being dependent on another piece of equipment. Though if you don’t want to have this manual labor, a magloader is a device that can make the task of magazine loading much easier. 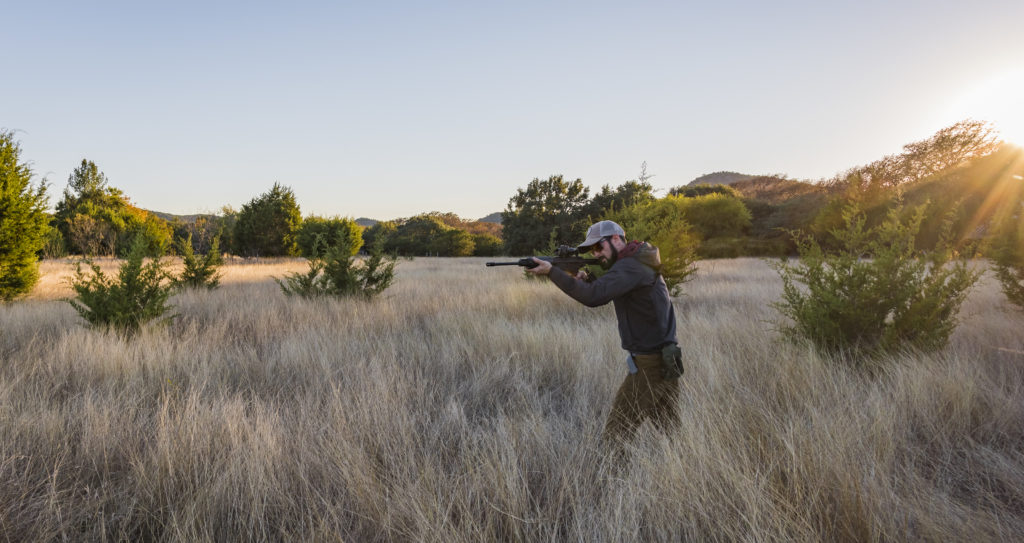 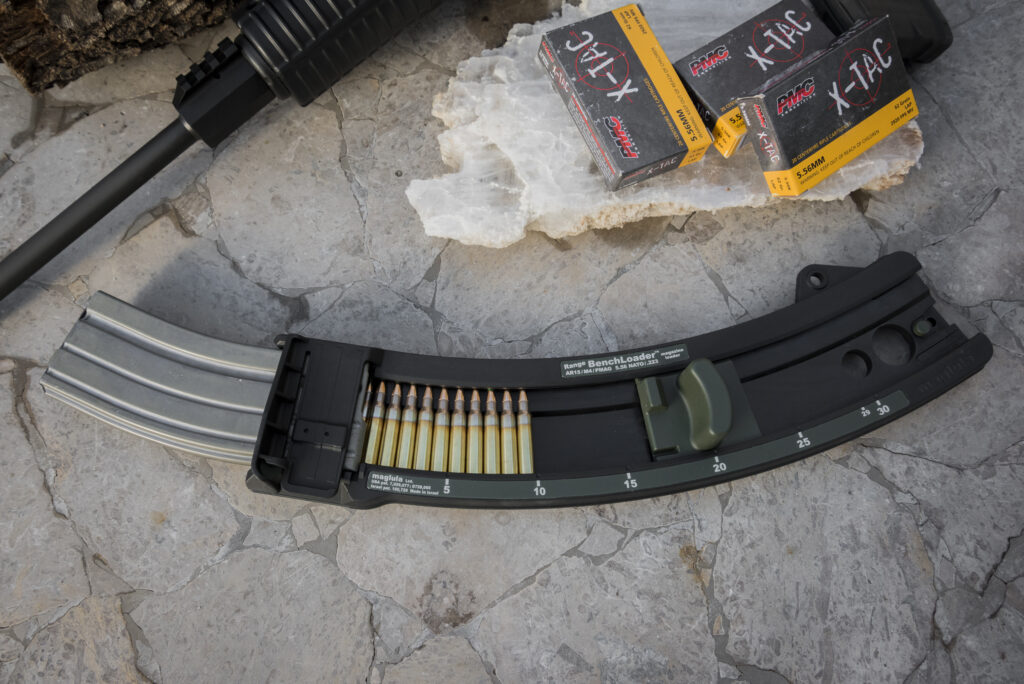 I took two of the top magloaders and styles, the Maglula AR-15/M-4 PMAG Range BenchLoader™-5.56/ .223 and the Maglula AR-15/M-16 LULA™-5.56/ .223 loader, put them up to a time test and compared their features, functions, and specs side-by-side. I’m no expert AR-15 magazine loader, but I do shoot often and I definitely get tired of loading magazines by hand, so I figure this is a perfect test to find out what magloader works best for me.

The Maglula Range Benchloader is stable and does not require rigorous or strenuous hand movement in order to load. This magloader was designed to be used on a flat surface, such as a table, the tailgate of a truck, or even stable flat ground. The user first puts a magazine into the magazine holder on one end of the magloader. You can use up to a 30 round magazine with this model. Then, you lay rounds onto the rail first at an angle and then straightens each one as they are slid towards the magazine. After the desired amount of rounds is reached, you simply slide the loading mechanism towards the magazine in a quick solid motion.

Storable in a light pouch, this magloader is portable and fairly light, though would still be bulky to carry for long distances in the field, along with you rifle, ammo and other gear. Also, it works best on a flat clean surface such as a table, where dirt and other natural debris will not get jammed into the magazine, making it better for the range than the field. This magloader is perfect for loading several magazines back to back. 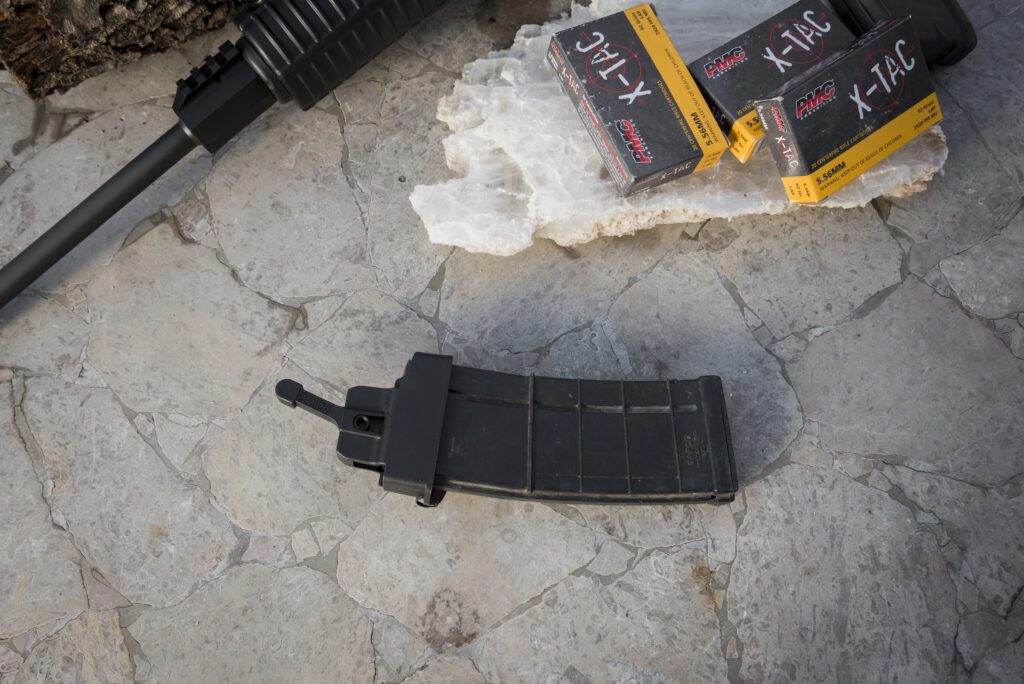 The Maglula LULA is a much smaller and more portable handheld device than the Benchloader. The user simply slides and clamps the device onto the end of the magazine of their choice. The user then stands the magazine on its bottom, and slides the lever on top of the device backwards, loads a round, then moves the lever forward, and loads another round. This process is repeated over and over until the magazine is fully loaded. It does require some strenuous hand movements in order to load each round into the magazine and hold the magazine steady while doing so. Though, for the most part, this magloader is easy to use and perfect for loading magazines one at a time.

Besides loading, this magloader is also able to quickly unload rounds. This is convenient for the range or if you do not want to keep rounds in their magazines. Simple to use, lightweight, and so small this easily portable magloader can even be placed into a pant pocket. This magloader is a better choice for the field than the Benchloader, and having the ability to easily unload magazines makes it worthy of having at the range as well.

Besides benefits such as portability in the field and ease of use, one of the most important factors for using a magloader is time efficiency. I wanted to find out what magloader was the most efficient relative to the others available and also compared to simply loading by hand so I create a time test. I recorded video of myself loading each of the two magloaders by hand three times. Then I chose the fastest time video recording for each method, and shared them in the video below.

As I mentioned, I’m not the most experienced AR-15 hand magazine loader, so I obviously showed some flaws in my loading. These flaws were also apparent being that I’m a first time user of these magloaders and had never watched any instructional videos, etc. That being said, using these magloader straight out of the box makes for some accurate first time user experience reviews. 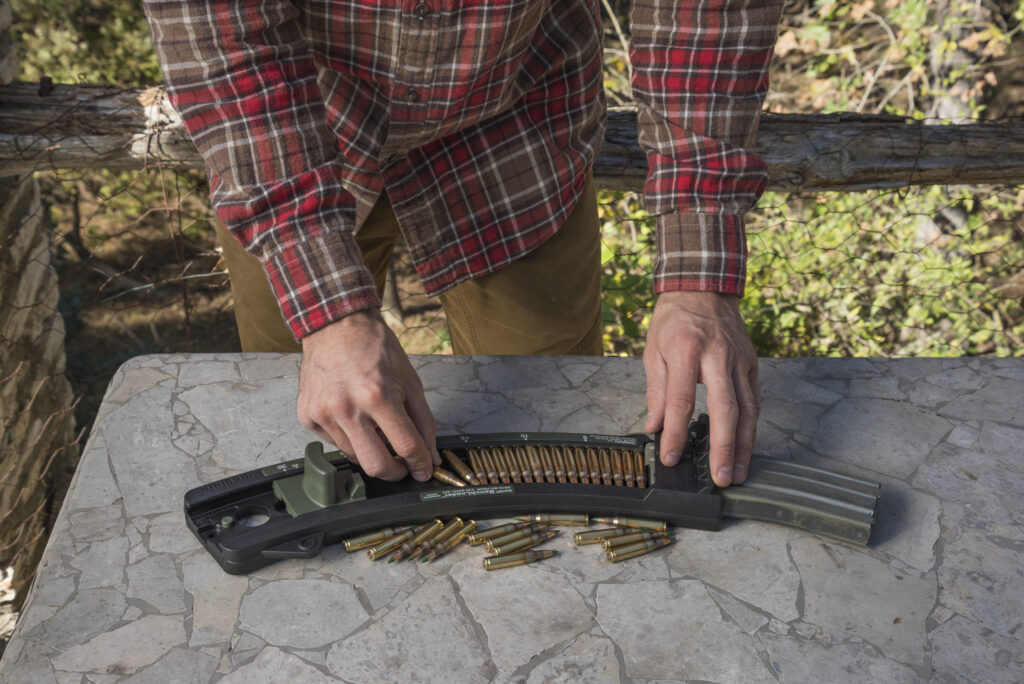 As expected, the Benchloader made for some nice easy loading. Really the only thing slowing me down was grabbing rounds at random from the pile. I did develop one technique towards the end of this run that helped speed up my overall time. This technique involved using two hands, one grabbing rounds and passing it off to the other hand, while the other hand dropped the rounds in the rail. Loading this magloader makes it easy to keep count on how many rounds you are loading, as it the numbers are labeled along the rail. A slight mistake can be seen as I slid the rounds into the magazine, but at 0:44 this ended up being the fastest loading time and least strenuous magloader and technique. 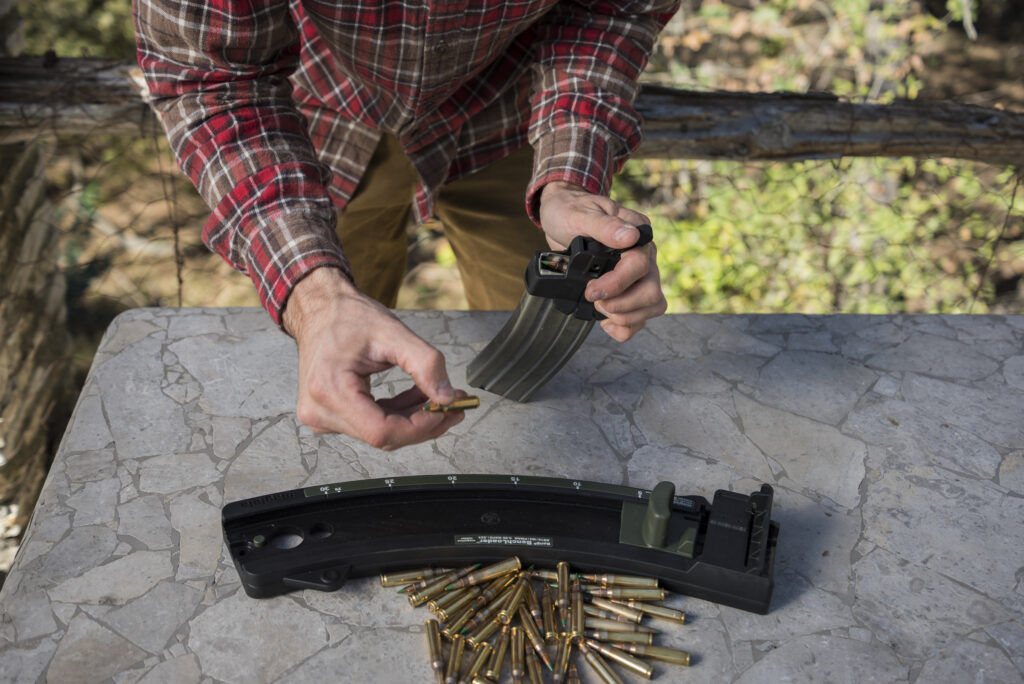 The LULA magloader took a bit more effort while I balanced the magloader on the table, and used one finger to flip the switch back and forth. I’m sure I could manage to hold the magazine in one hand and flip the switch back and forth, but I didn’t want to skew the test by trying to make my technique too complicated. Even after counting, I wasn’t completely sure of how many rounds I had loaded, as there was no way to tell as with the Benchloader. Again grabbing from the pile of rounds had its way of slowing me down and at a total loading time of 01:04 the LULA was definitely slower than the Benchloader. Though being able to switch straight into unload mode and basically hold the small LULA magloader in one hand proved it be a worthy competitor to the bigger and faster Benchloader.

Handloading an AR-15 magazine as fast as you can is not the easiest task in the world, and especially loading a worn-in used one. Though, I made the attempt the best I could. Right towards the end of the recording I dropped a round, which slowed my time to 01:08. This was 4 seconds slower than the LULA magloader, plus my hands and fingertips were already beginning to get sore from loading only one magazine. Now, imagine having to load several or even dozens of magazines. Your time would only get slower the more you do. With a magloader, especially the Benchloader, you would be able to keep a faster time, while preventing strain on your hands and fingers. 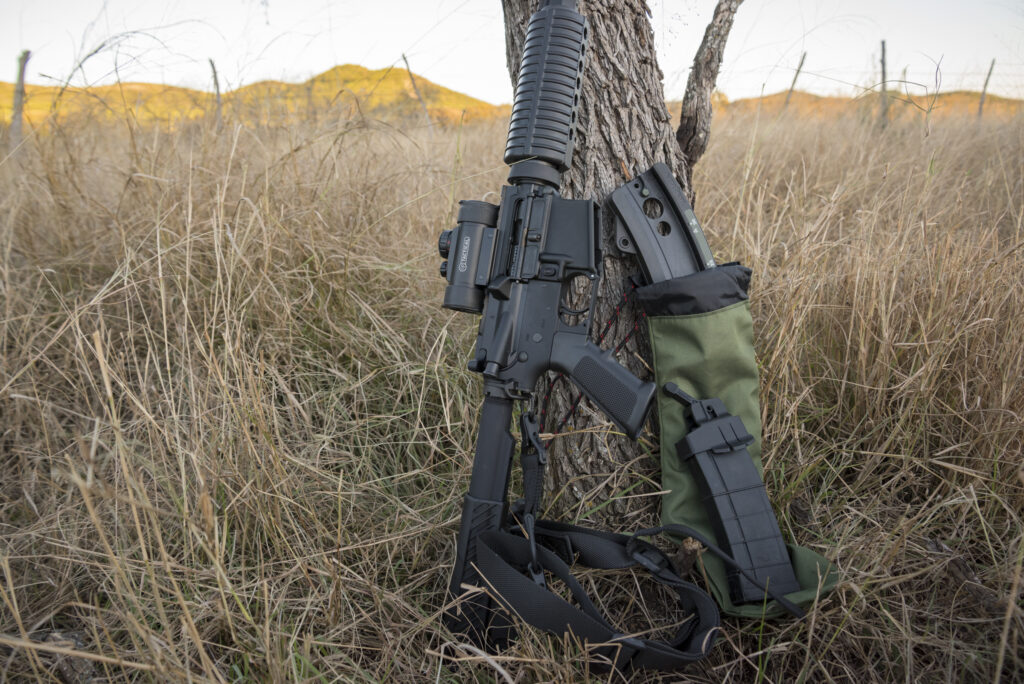 Whether you want to be able to load AR-15 or other caliber magazines more efficiently for the range, or for peace of mind in knowing that you are able to reload fast and efficiently, magloaders are a great device to have with your gear. You don’t necessarily need to be able to load a magazine at the range as fast as you can though knowing you can save a lot of time and your fingers is definitely a plus. Say you want to fire off ten thirty-round magazines at a range in a 4-hour time period, which is a lot of shooting; if you load the Benchloader in 44-seconds for each magazine it will take you a total of 07:20. Though, if you load ten magazines by hand, at 01:08 for the first mag, then increase by 10-seconds for each mag for the first five mags as your hands get tired, and then stay at 1:48 for each of the last five mags, it will take you 15-minutes, twice as long as using the Benchloader, and 5 times as strenuous on your hands. Remember, these times are from my fastest loading times, so if I was going to load more casually my times would be longer. I’m assuming twice as long for handloading. An estimate totalling 30-minutes of my 4-hour shoot would be spent loading magazines.

The Maglula Benchloader is the fastest magazine loader if used on a flat surface, making it perfect to use at the range. The compact, light, and portable Maglula LULA loader is slower at loading, but makes for the best style to carry in the field. Being able to quickly unload a magazine makes the LULA a great piece of gear to have at the range as well.

Knowing how to handload a magazine is a must for anyone that uses a magazine operated firearm. Being able to handload a magazine quickly and efficiently is also a good skill to have. Though using a magloader has quite the advantage, especially when it comes to preserving fingers and preventing arthritis after years spent shooting at the range or in the field. Overall, I’m now a big proponent for magazine loaders and will be more willing to spend a day out shooting knowing that I don’t have to wear myself out loading magazine after magazine at the range. 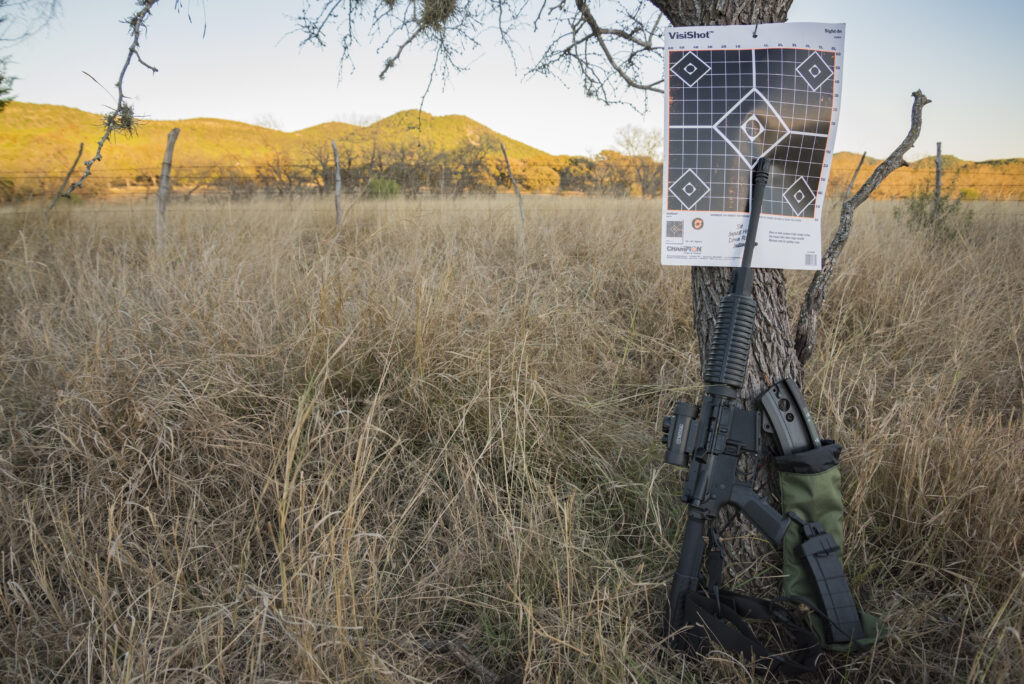