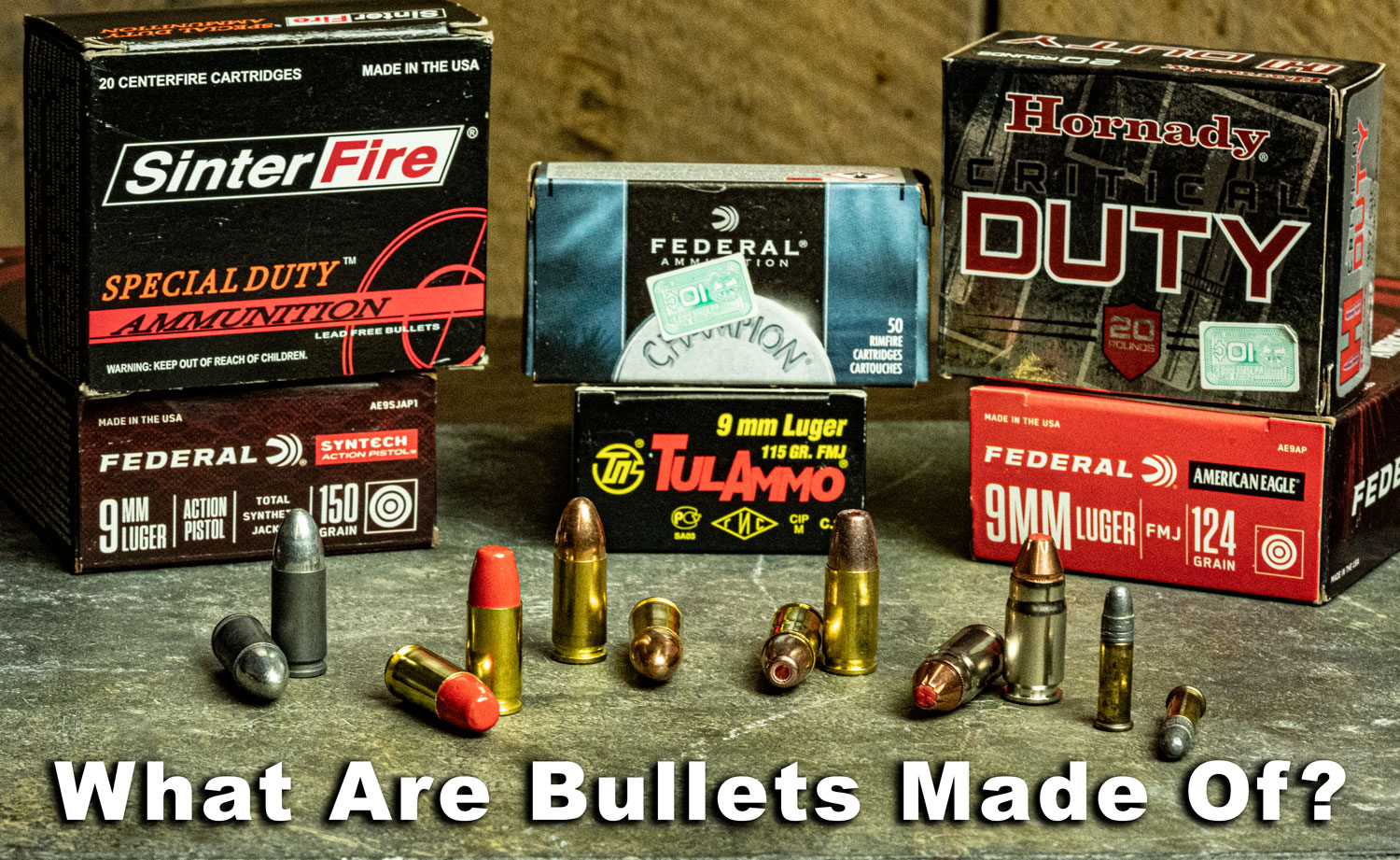 What are bullets made of? Let’s take a look at modern ammunition and the materials that go into the projectiles many of us rely upon for self-defense.

Today’s bullets are more diverse and complex than ever.

There’s a ton of history in bullets and ammo. Many of the materials manufacturers use to make bullets date back almost eight centuries. Of course, we only recently discovered some materials as viable options for effective ammunition.

If you really want to understand bullets, it helps to first understand the material we use to manufacture them. Remember, the bullet is technically just the projectile. It’s one part of a loaded cartridge of ammunition.

The first projectile humans used in hunting or warfare was almost certainly a rock of some sort. Then came spears, arrows, and other primitive forms of projectiles. But a “bullet,” as we understand the term, wasn’t used until sometime in the 13th century, when mankind discovered that explosive powder could be used to violently launch projectiles from a tube. Early bullets, therefore, were any stones or metal objects that “shooters” could cram down the barrel of a primitive firearm.

Lead and lead alloys eventually become the material of choice for bullet manufacturing. It was affordable, available, and easy to form. Lead or alloys provided enough weight to do damage while maintaining some semblance of speed. By the mid-16th century, lead was the dominant material in these projectiles, or “balls” as people called them at the time.

The industrial revolution brought rapid change to technology and society, including firearms and ammunition. The adoption of rifling (spirals in the barrel), and the ability to quickly “rifle” a barrel, made firearms more accurate. This evolution allowed bullets to shift from a round sphere to the tube shape they hold today. This also allowed for faster speeds, but lead left significant residue, especially when fired from powerful weapons.

This change led to the development of the full metal jacket, a projectile with a lead core and a hard-metal (usually brass) shell. In the 20th century, many intuitive ammo smiths started experimenting with a variety of materials, including copper, steel, and even rubbers and plastics to make bullets more effective and reliable. This has also led to a diverse range of purposes for them. For example, there are projectiles made specifically for hunting dangerous game, while others are intended as non-lethal options for law enforcement.

What Are Modern Bullets Made From?

The projectiles you find today are made from a huge variety of materials. From complex metals to highly-developed plastic polymers, today’s bullets are a wonder of scientific achievement and intuitive thinking.

So, let’s go in-depth on some of these bullet materials and what shooters use them for: 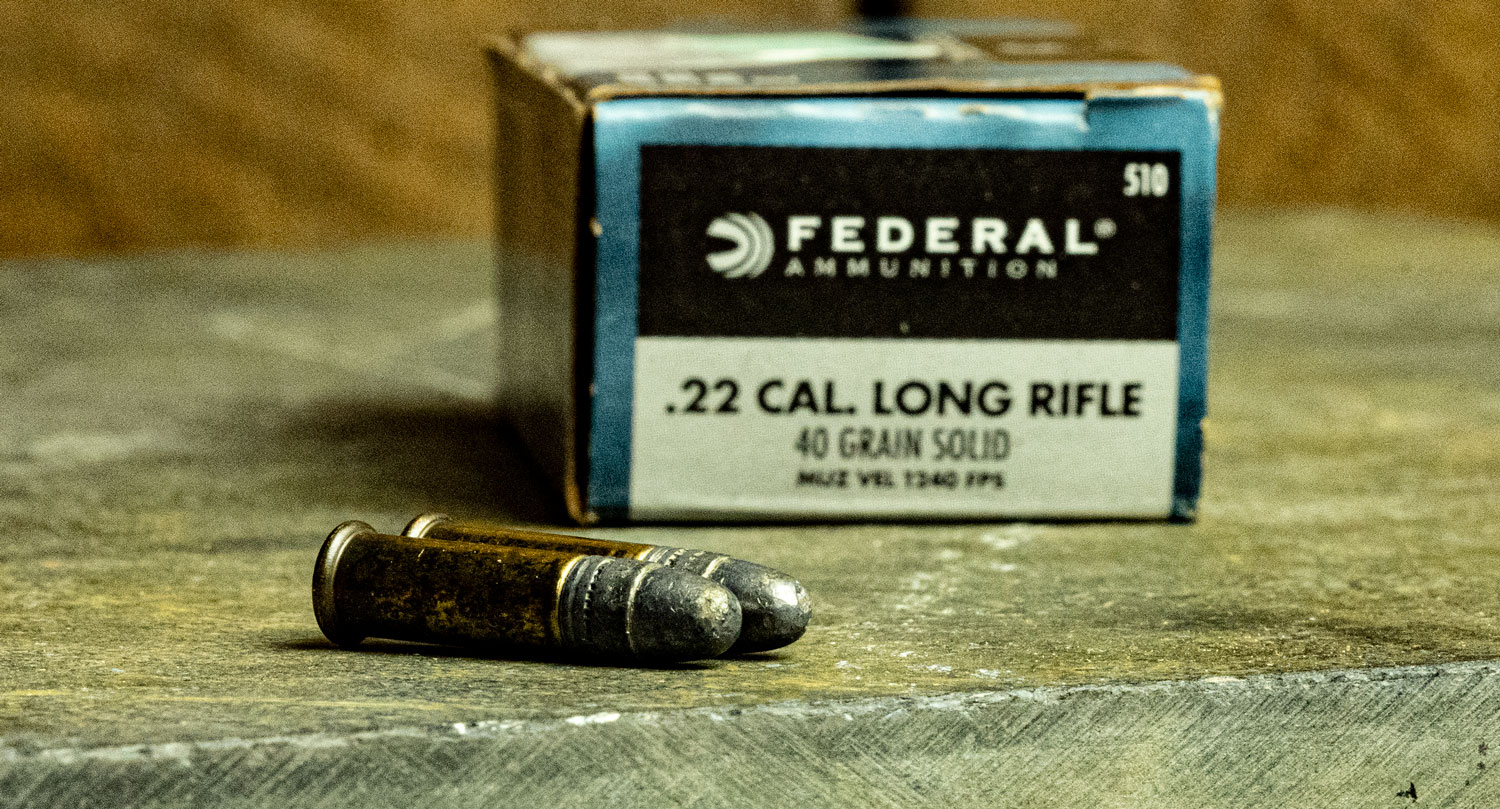 Lead is likely the most common material in bullets. Some projectiles are made entirely of lead. One example of this is lead round nose bullets. Some have lead cores, like full metal jacket rounds, which feature lead wrapped in copper or a similar hard metal.

Lead, compared to other metals, is soft (or “malleable”) and affordable. This makes it easy to shape, and also makes it a cost-effective material. There are, however, concerns about the toxicity of lead, which is why many indoor shooting facilities don’t allow all-lead bullets that give off a lead residue.

Brass is not only used in the cartridge casing, it is also used extensively in bullets, especially jacketed rounds.

As a metal, brass is a combination of copper and zinc. It comes in a variety of mixtures that can help its users achieve specific results. In ammo, the type of brass manufacturers use in bullets is called a “gilding metal.” (Yes, gilding metal is a type of brass.)

We use gilding metal as the outer cover for most jacketed bullets. This includes jacketed hollow points and full metal jackets.

Although brass (copper and zinc) is more common, there are bullets that feature unmixed copper. And manufacturers usually use brass as a jacket surrounding a lead core, it’s not uncommon to use copper to make the entire projectile.

Several companies are creating copper bullets that have a soft ballistic tip. Manufacturers are now making copper loads that are extremely reliable. Gun owners use the loads for hunting, especially large game animals.

Copper bullets are less likely to fragment upon impact compared to bullets with lead. Examinations serve as evidence that lead bullets leave fragments while copper retains a single form. Affordability is a factor, but with more manufacturers making copper rounds, the cost is coming down. 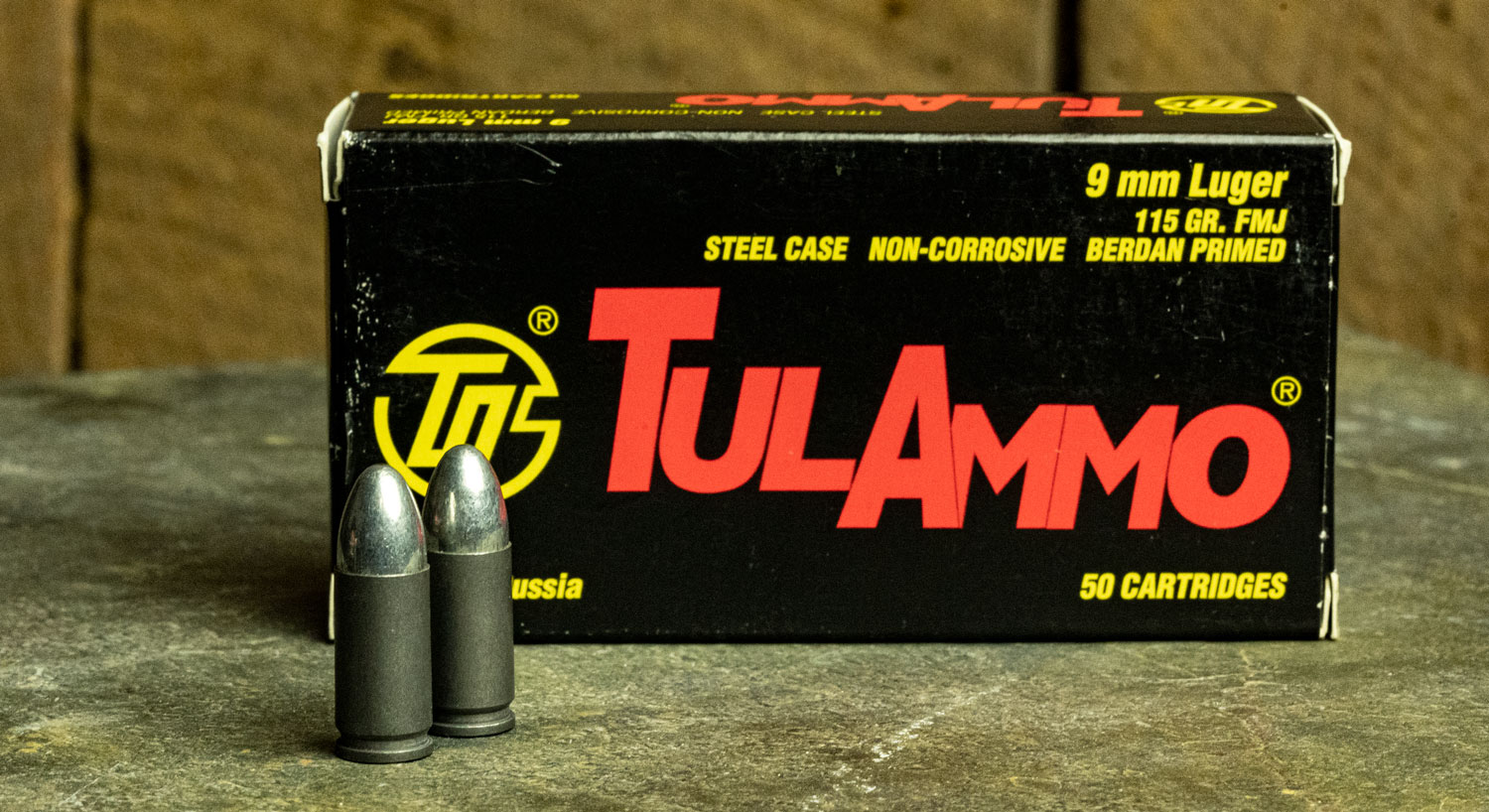 Zinc is used in a few products, especially the 9mm ammunition from Tula Ammo pictured above. The zinc serves as a substitute for the brass jacket. This is a slightly brittle metal that has a silvery-blue appearance, giving them a unique appearance. We joke it’s werewolf hunting ammo (silver bullet) but in reality, it performs on par with with the brass jacketed rounds that look more familiar to most shooters. 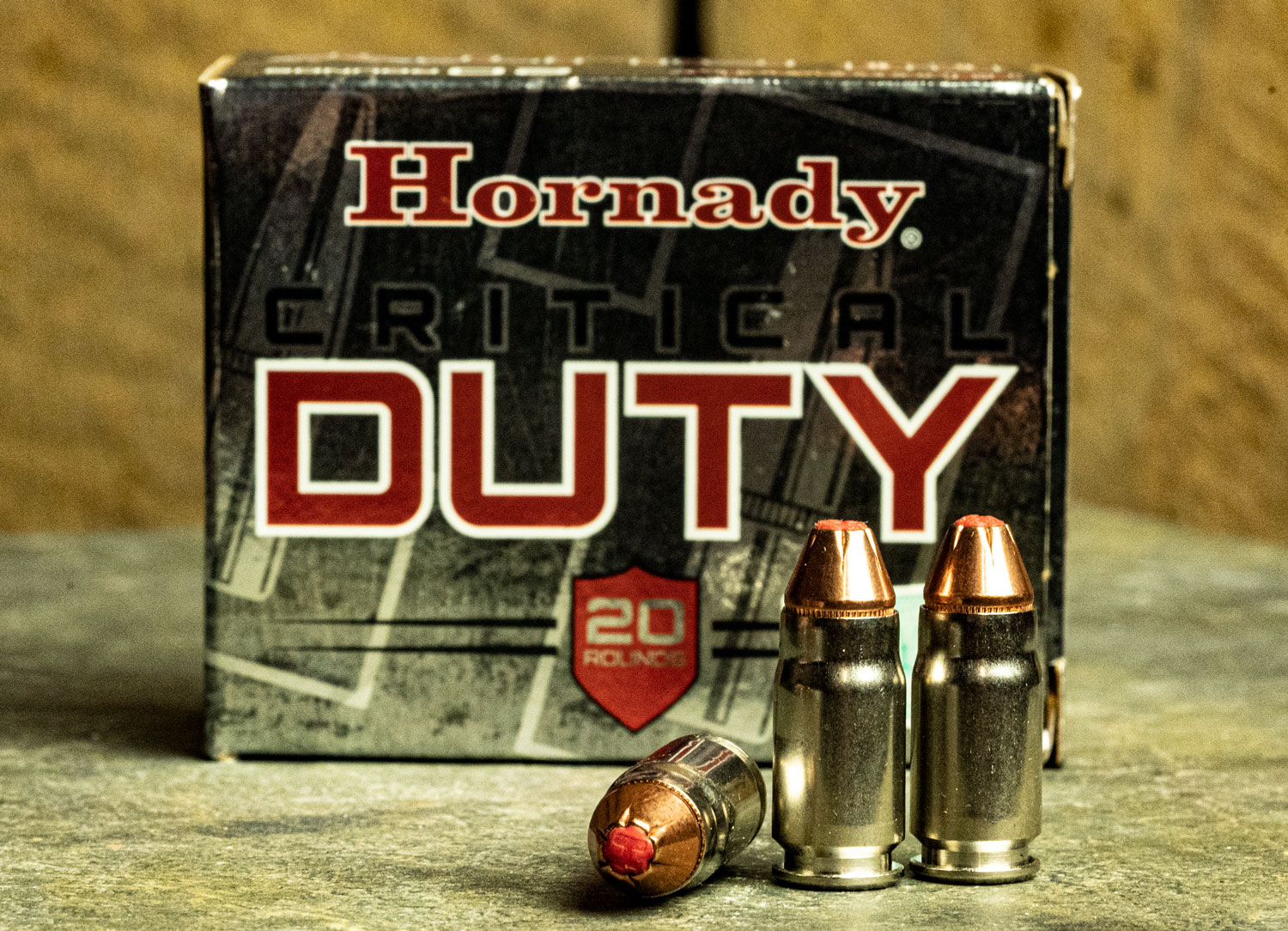 As one of the most versatile materials available, we use plastics in all types of products. That includes ammunition.

Shooters first fired all-plastic bullets in the 1970’s. The bullets served as a non-lethal option for law-enforcement, including riot-control and suspect apprehension. There are also plastic training bullets you can load into standard cartridges.

Companies like Hornady also use plastics in the tips of metal bullets, usually jacketed rounds. Often, the ammo makers form the plastic into a cone shape. Then, they place it at the tip of the projectile. This gives the bullet an aerodynamic shape. (Without the plastic tip, the bullet would have a flat nose and loose aerodynamics.) We generally shoot plastic tips with long-distance hunting rounds.

Rubber is another material companies use in a variety of bullets. It changes the performance of rounds and helps deliver for various functions. Most well known is the “non-lethal” (non-lethal can still kill) bullets that law enforcement uses for riot control.

Although police forces use them, you can purchase rubber and other “non-lethal” rounds for your firearms, including common pistol and shotgun rounds (9mm Luger or 12-gauge, for example) loaded with rubber or rubber buckshot. 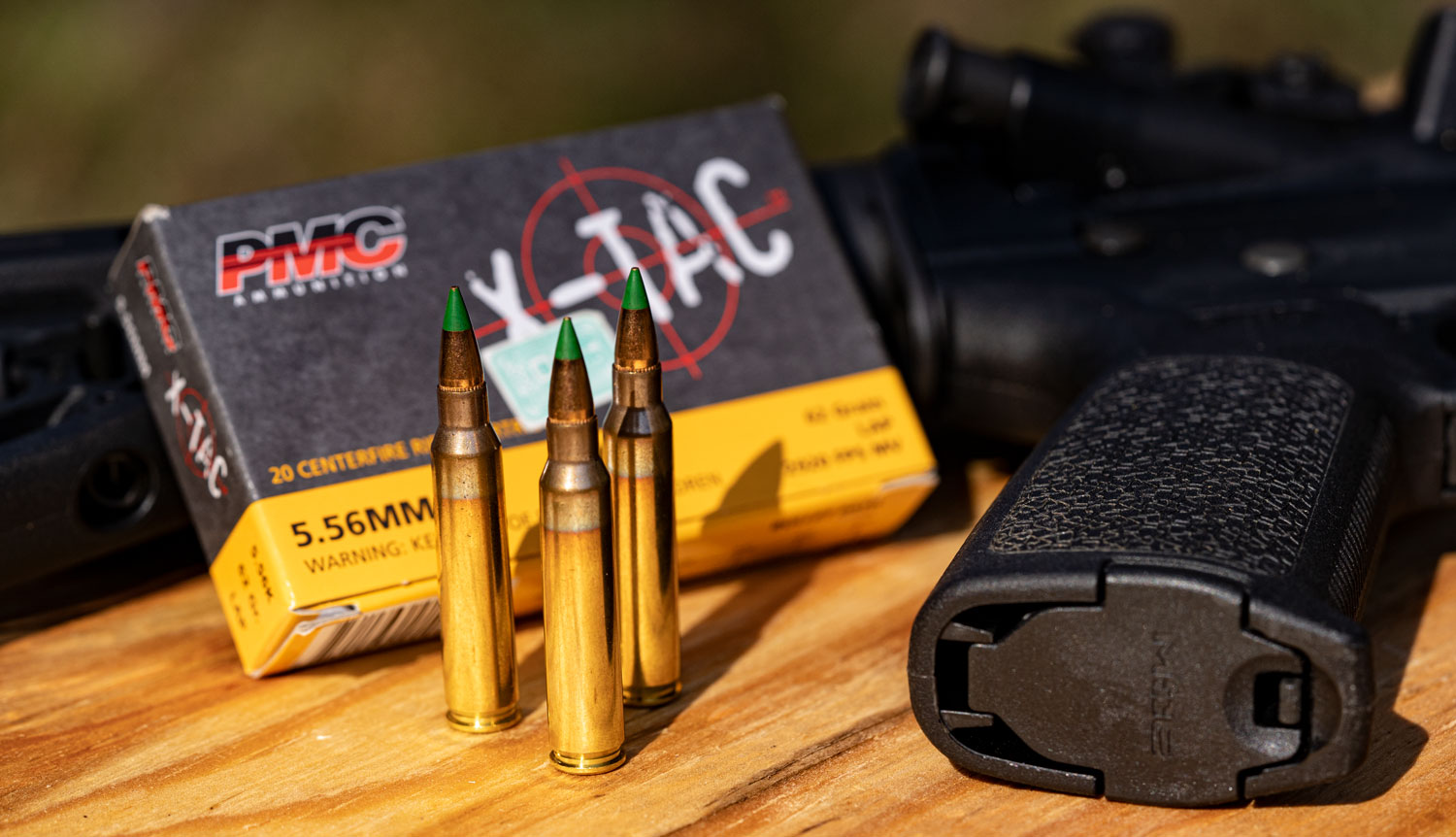 Although far less common than lead, there are options available for steel-core bullets. This makes for an extremely hard and dense core, which impact how the bullet performs from the barrel to the target, as well as how it acts upon impact.

Steel delivers a high penetration level. This is why we call steel-core ammunition “armor piercing,” or “AP.”

5.56×45 ammo classified as M855 is some of the most popular ammo in the world; it has a steel core. As a result, it’s often the target of politicians and other regulators who try to paint it as more destructive than other .223/5.56 ammo options. 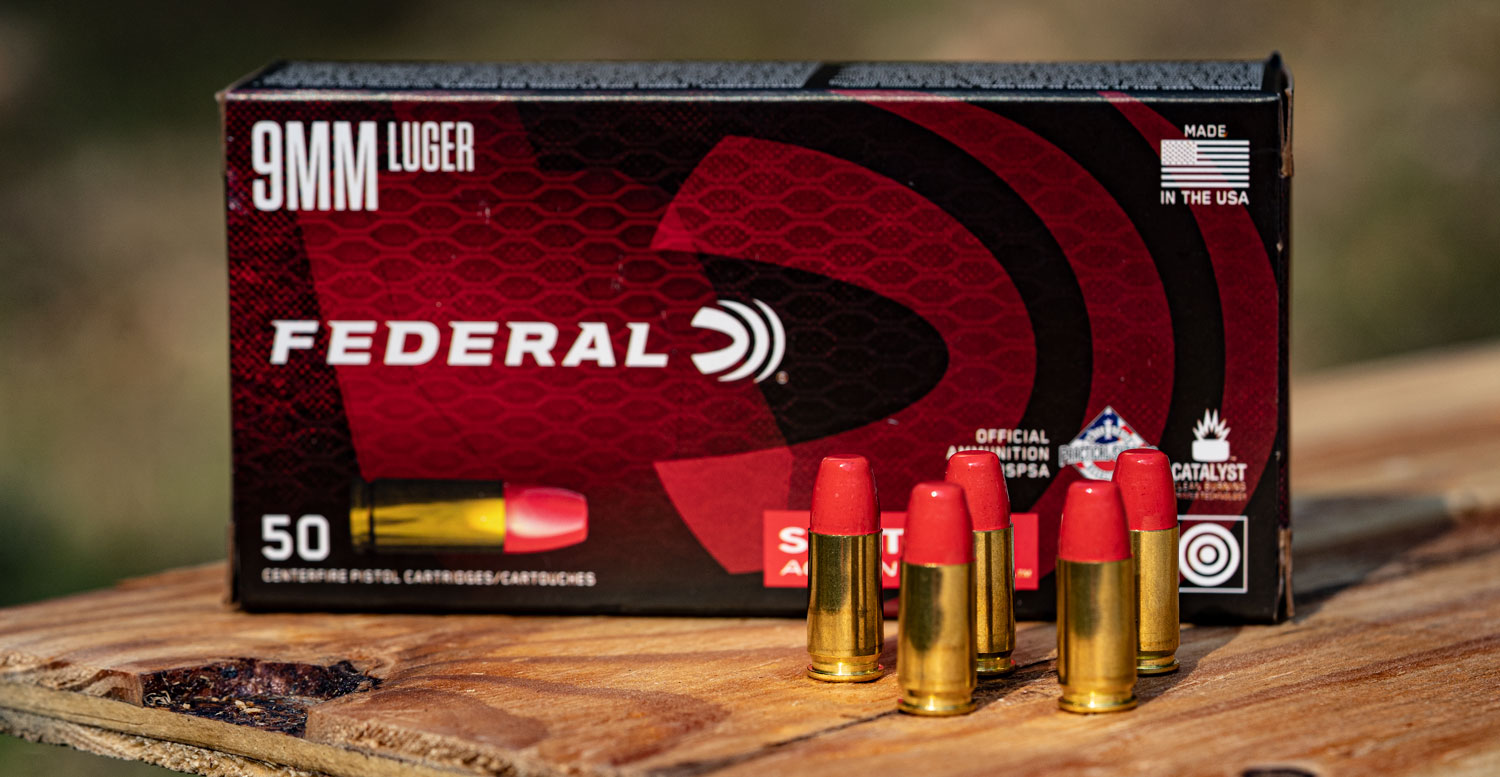 Nylon is a generic term we use to describe a variety of synthetic polymers. Essentially, it is a type of plastic with a smooth surface. This material has many purposes; in firearms, manufacturers coat it over bullets to reduce barrel fouling and increase feeding consistency.

The Federal Syntech line is a great, modern example of nylon projectiles.

From all-copper to lead round nose, we have the right ammunition for your specific needs at AmmoToGo.com.

What Are The Basic Parts of Ammunition?