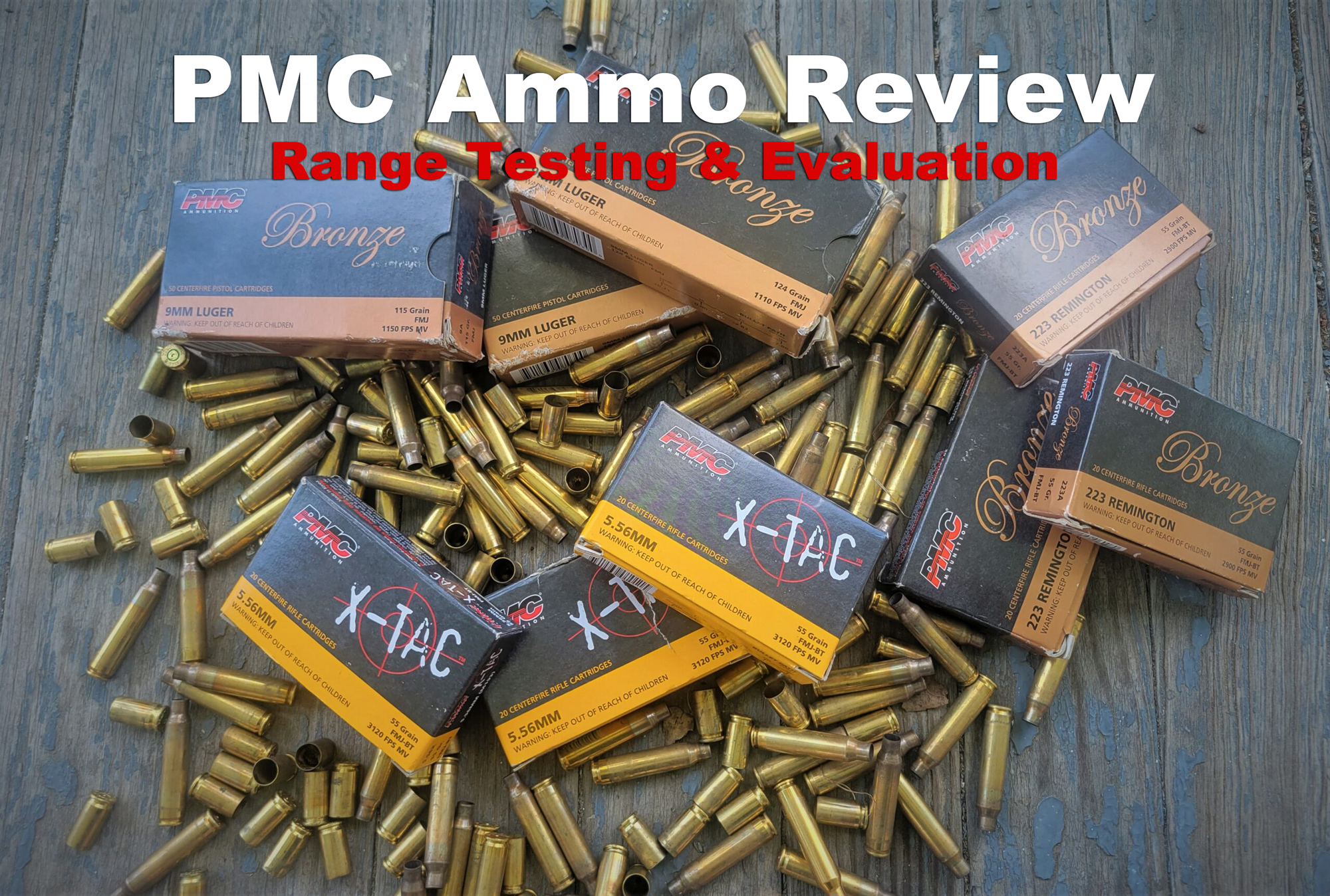 A PMC ammo review where we take the South Korean made rounds to the range with real-world testing more.

Recent supply issues and the rising cost of ammo have led many shooters (including us) to reach for substitutes for their tried-and-true favorite loads.

However, it’s natural to distrust things that aren’t made in the good, old U.S. of A. And no one wants to drop cash on a bunch of ammunition they’ve never tried.

If you’re reluctant to roll the dice with South Korean ammo, don’t worry. We’ve done the gambling for you. Here is our synopsis of PMC performance after field testing several hundred rounds as part of this PMC ammo review.

PMC is an acronym for “Precision Made Cartridges.” The ammo is made in South Korea by the ISO-certified Poongsan Metal Corporation.

Founded in 1968, the Poongsan Corp. specializes in non-ferrous metals, manufacturing everything from roofing materials to coin blanks. The company took over South Korea’s ammunition plant in 1973 and later named the factory Precision Made Cartridges.

As PMC, the company mainly manufactures munitions for South Korea’s military forces. Its main goal is to end South Korea’s dependence on outside sources for its ammunition needs.

Producing cartridges that span the spectrum from small arms pistol ammo to large howitzer rounds, PMC is one of the largest ammo suppliers in the world.

In its quest for munitions independence, PMC follows a “vertical integration philosophy.” To maintain control over every step of the production process, PMC manufactures all its components from high-quality raw materials. They even operate their own brass mill. This approach not only gives them total control over quality but also prevents disruptions in their supply chain.

PMC’s excess capacity ammo is sold to the civilian market. Many American shooters love the consistency and affordability of PMC range ammo.

What PMC Has to Offer

PMC ammo comes in a variety of flavors suitable for just about every shooting application. Here is a quick breakdown of their most popular lines. 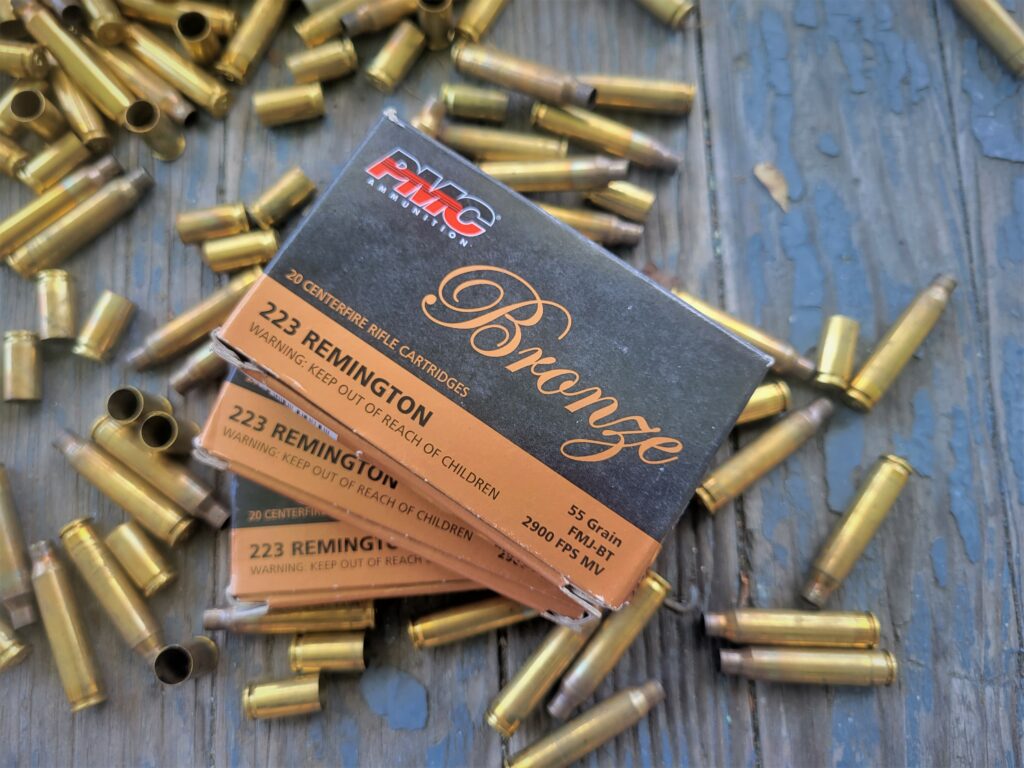 The company’s most popular line, PMC Bronze, is designed for recreational shooters. Although PMC Bronze is priced for high-volume shooting, they didn’t compromise accuracy or performance to keep the price low. PMC offers this Bronze line-up in most popular calibers, from 9mm to 5.56×45.

This line is also great for hunters and target shooters looking for an inexpensive way to hone their marksmanship skills.

The hollow point’s ogive ensures feeding is consistent with regular FMJs. The bullet also features integrated ribs and flutes, which help the projectile expand up to twice the original diameter in soft tissue. 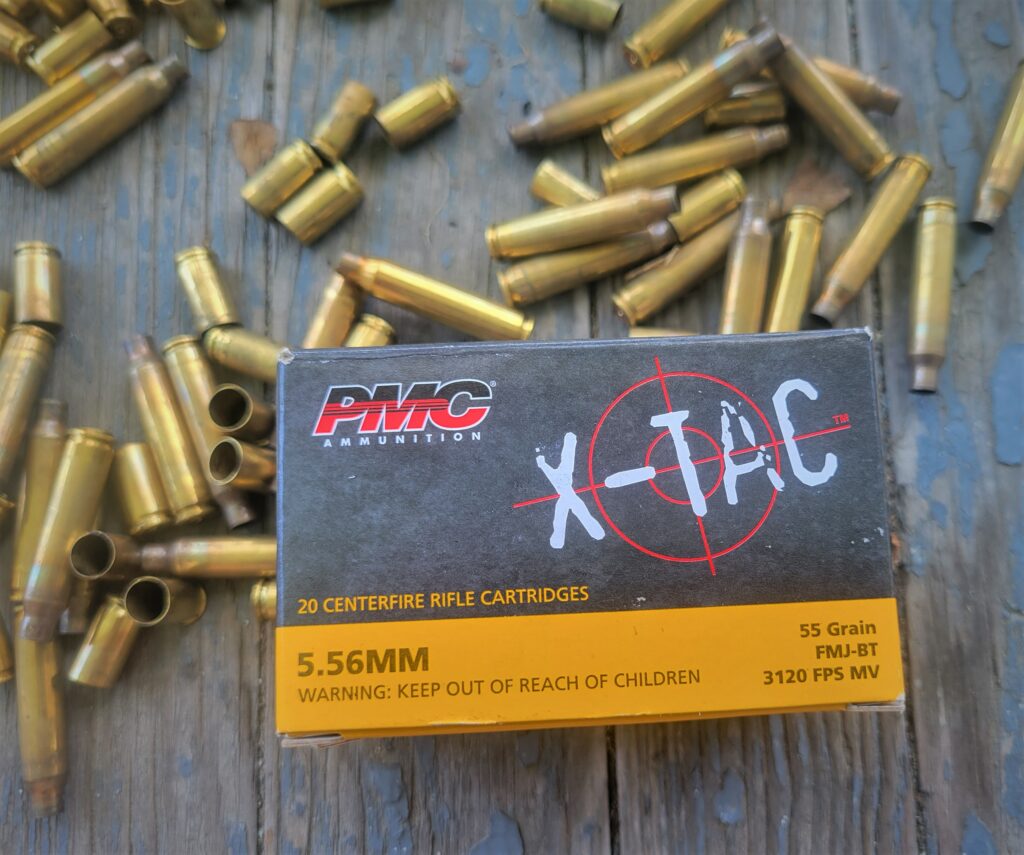 PMC X-TAC is designed for law enforcement and military applications. This ammo meets the specs for these organizations and is suitable for civilian shooters who demand consistent, reliable performance from the ammunition.

These loads take PMC’s high-quality X-Tac loads up a notch. Featuring the sweetheart of American bullet designs, PMC X-TAC is made with Sierra bullets. These loads are designed to deliver pinpoint accuracy for long-range and competitive shooters.

Our Impressions of PMC Ammo

Our PMC Ammo Review: What We Tested

We also ran 60 rounds of PMC Bronze .223 Rem 55-grain FMJs and 60 rounds of PMC X-TAC 5.56mm  55-grain FMJ-BTs through a mil-spec AR-15 with a standard 16-inch barrel and a 1:7 twist rate. Our goal was to test the performance and consistency of the rounds to deliver a credible PMC ammo review for our fellow shooters.

If you spend any time scrolling gun forums, you know how subjective shooter opinions can be. One shooter will swear on his dead Grandma’s fried chicken recipe that one brand is the absolute best he ever ran through a firearm. Another guy, who had a single low-pressure round 12 years ago, will call the same brand absolute junk (while insulting his friend’s dearly departed Granny’s culinary skills).

That’s why we like cold hard numbers, especially the type that doesn’t rely on shooter skills.

We pulled out our handy dandy chronograph to measure round velocity, because hypothetically, consistent velocity in a load should equal consistent on-target performance (at least in the hands of a competent shooter).

Using our chronograph and a trusty calculator app, here’s what we found.

Why are the average muzzle velocities different from PMC’s?

It doesn’t mean PMC is being dishonest. It is more likely that we used a different barrel length, were shooting at a different altitude, the humidity was extra high, or our chronograph was being persnickety. 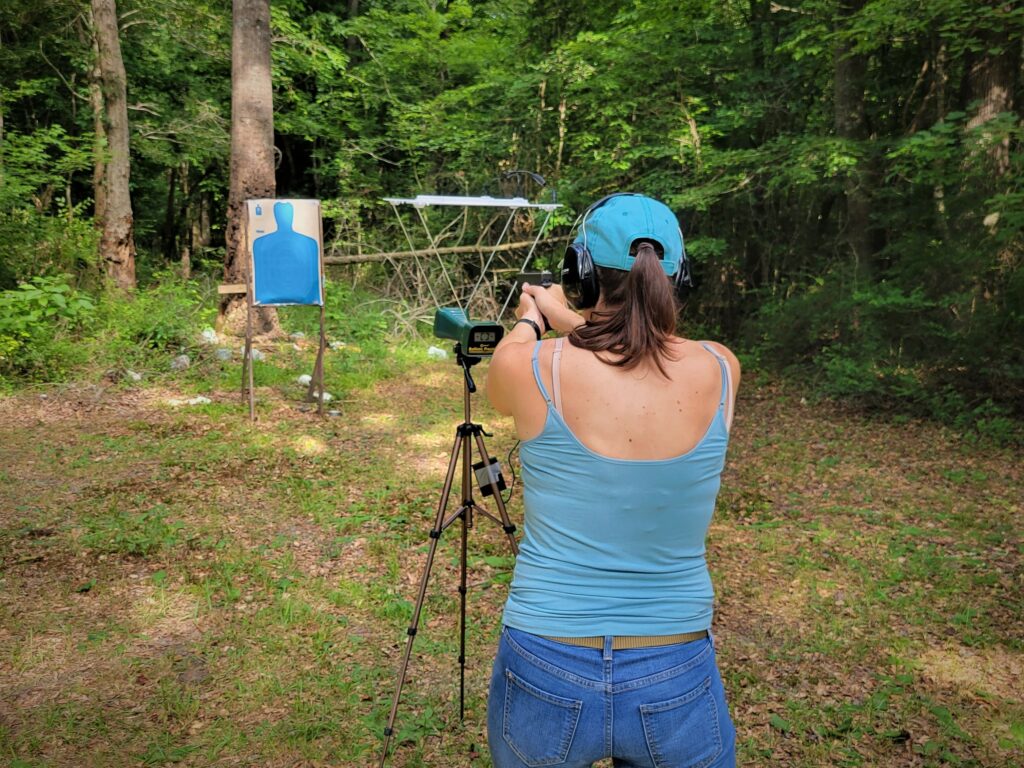 We weren’t testing in a cold laboratory, and average velocity isn’t particularly meaningful anyway (although it is interesting to see how our numbers compare to the manufacturer’s numbers).

To truly measure consistency, we had to do some hard math. The more telling stats are extreme spread (ES) and standard deviation (SD).

When it comes to checking consistency, the extreme spread is a better indicator than the average velocity of our test rounds.

Because differences in velocity magnify over distance, ES is particularly important for long-range shooters.

Ammo made with consistent components loaded to exacting standards should produce a relatively low ES.

Top-notch handloaders aim for an ES under 40.  For factory loads, an ES under 100 is considered extra impressive. 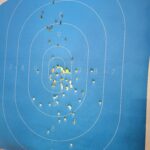 While extreme spread paints a picture of a load’s full range of velocity performance, it doesn’t paint a true picture of consistency.

Standard Deviation (SD) is a much better indicator of consistency. SD shows us how spread out the velocities of individual cartridges are from the load’s average performance.

Shooting loads with high ES/SD is no bueno for long-range shooters. The chances of a bullet hitting high or low due to velocity variations increase exponentially with increases in ES/SD. Even the best marksman can’t compensate for high ES/SD.

The effects of ES and SD are magnified as the distance to your target increases. However, these numbers are far more important for engaging targets at range than they are for punching them at typical self-defense distances.

PMC Ammo Review: By the Numbers

Finding ES and SD takes some ciphering, but we’ve done all the heavy mathing for you.

Here are our results.

While you won’t be winning any recision long-range matches with any of these loads, they are consistent enough to hit the target at medium to close ranges.

I hate trying to quantify accuracy. Accuracy is usually in the hand of the shooter, not the loads running through the gun.

Even expensive match ammo and time-consuming precision handloads are no substitute for basic shooting skills. Poor breathing, trigger control, and follow-through can’t be solved by switching your load. You need to master the basics before you start fiddling with what you feed your firearm. 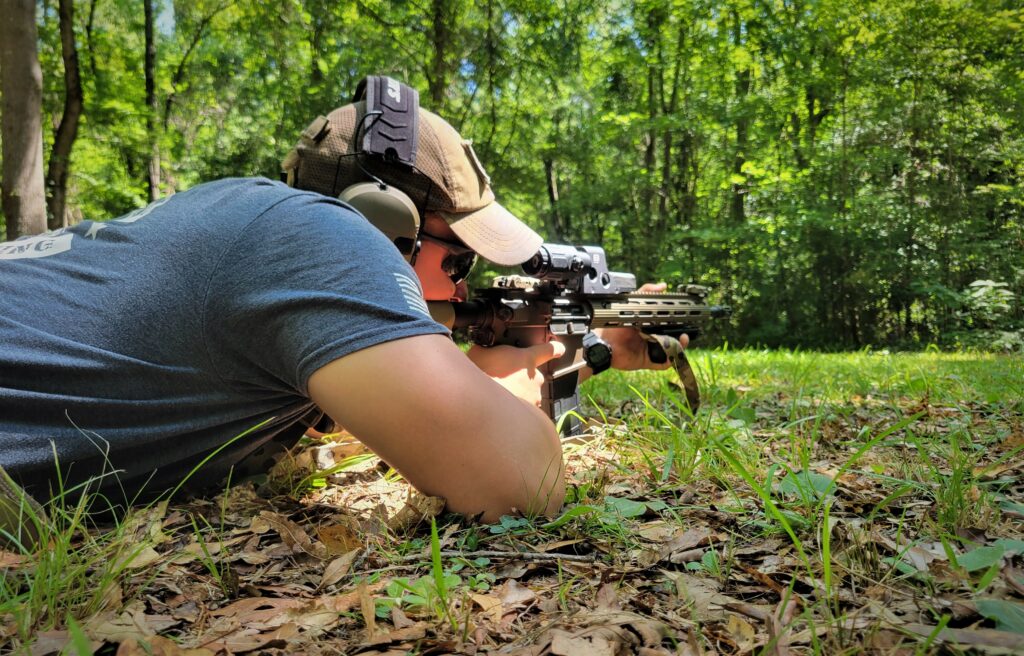 We aren’t PRS shooters. However, we did call in the “pros” to help test PMC’s .223/5.56 loads, i.e. my Airborne infantrymen sons. (“All the way!”). We didn’t bother with bench rests or lead sleds (because that’s no fun). Even so, we managed better-than-decent shot groups.

These loads seemed about equal to other practice rounds we’ve used in the same price range. We also didn’t see much difference between the Bronze and X-TAC loads.

In defensive shooting, reliability is probably more important than precision accuracy. You want every pull of the trigger to run reliably, spit out a spent case, and then cycle the next round behind it.

Every single PMC round went “BANG” when we pulled the trigger.

As a bonus, our rapid-fire mag dumps had every round landing inside a silhouette target.

Bonus #2: It ran without mucking up the inside of our guns.

PMC will cost you fewer pennies per round than Winchester White Box or Federal American Eagle.

If you want to kill paper without killing your bank account, PMC loads do a darn good job.

While you probably won’t be winning any high-stakes match competitions with this stuff, PMC loads are cost-effective, run well, hold a decent group, and won’t dirty up your gun too badly.

If you haven’t tried PMC ammo yet, it is a super affordable option for practice and plinking.