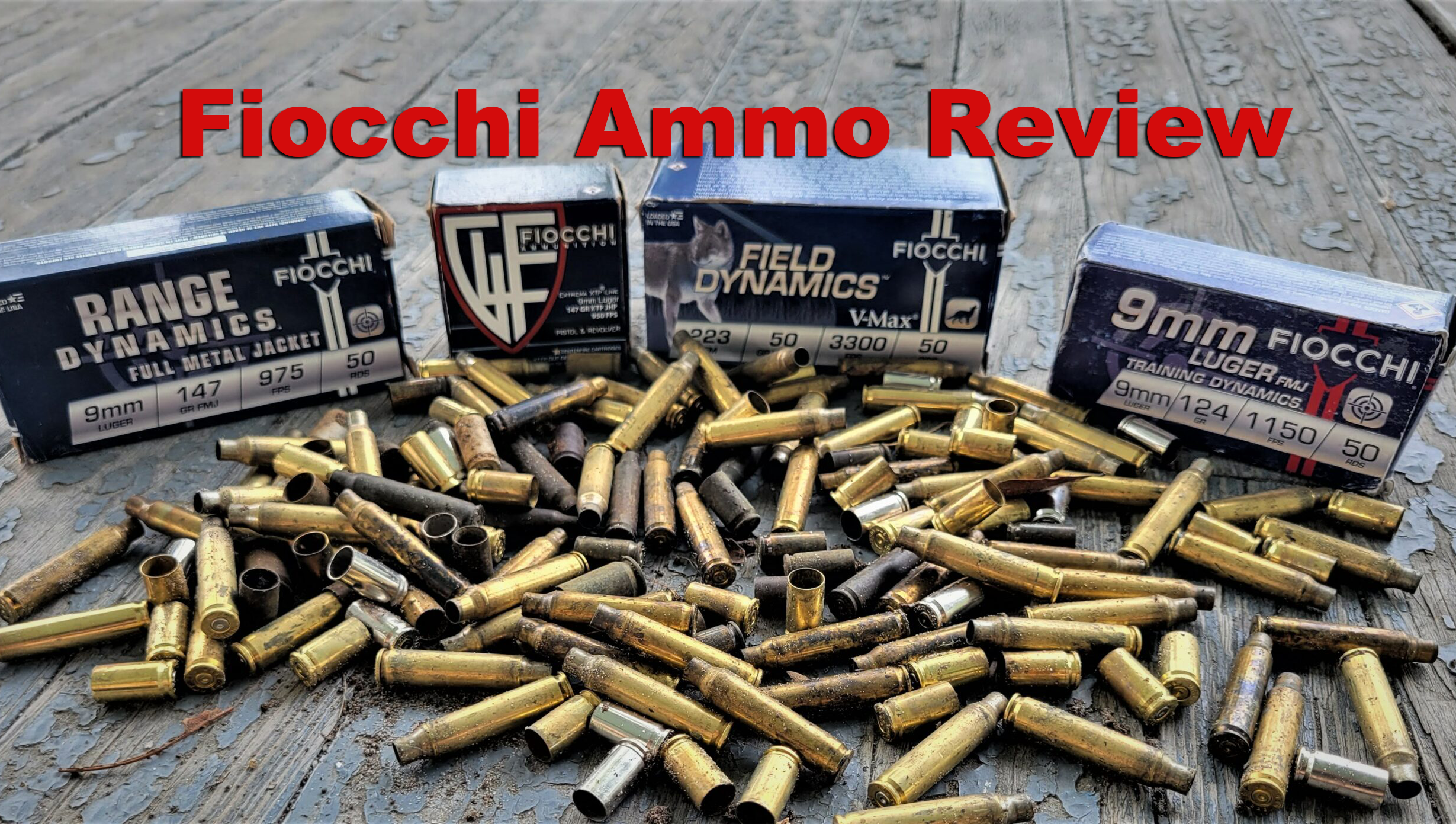 Range testing results with a handful of Fiocchi ammo loads. Is Fiocchi ammo good and worth your training money investment? We’ll help you decide.

What do you get when you combine classic Italian style with hardworking American performance?

You get Fiocchi ammunition.

If you’ve ever been hesitant to test out this brand of ammo because it has a funny name, you’re not alone. However, Fiocchi loads bring plenty to the table.

We hauled several loads to the range to test them out, and we couldn’t be more pleased as you’ll find out in this Fiocchi Ammo Review.

Fiocchi began producing top-notch ammunition in Lecco, Italy in 1876 by Giulio Fiocchi. It is the largest and oldest ammo manufacturer in Italy.

Although Fiocchi manufactures all the standard modern cartridges, the company also produces rarer vintage cartridges for collectors. Today, most of the Fiocchi ammo we sell here at AmmoToGo.com is American-made.

The transition from Italy to the United States happened gradually for Fiocchi.

That’s good news if you’re dedicated to buying products made in the good ole USA. In 1980, Fiocchi’s great-grandson Carlo, after honeymooning with his bride in the US, decided the company should reconsider the American market. He scooped up an old dairy farm located in America’s heartland and built a new Fiocchi state-of-the-art ammunition plant on US soil.

Today, hundreds of hardworking Americans drop their kids off at daycare and then head to work at Fiocchi’s Ozark, Missouri and Little Rock, Arkansas factories.

Although the company is still based in Lecco, Italy, nearly 80% of Fiocchi brand products sold in the US market are loaded right here in the states.

Americans tend to be skeptical of brands they can’t easily pronounce (It’s “fee-OH-kee” by the way). But there’s no need to be reluctant with this brand. They’ve been churning out high-quality ammo since before your great-grandad was big enough to hold a BB gun.

We hit the range to run a few Fiocchi loads through the wringer. If the company’s reputation isn’t enough to convince you, maybe our experience will give you a better idea of what this ammo is capable of. 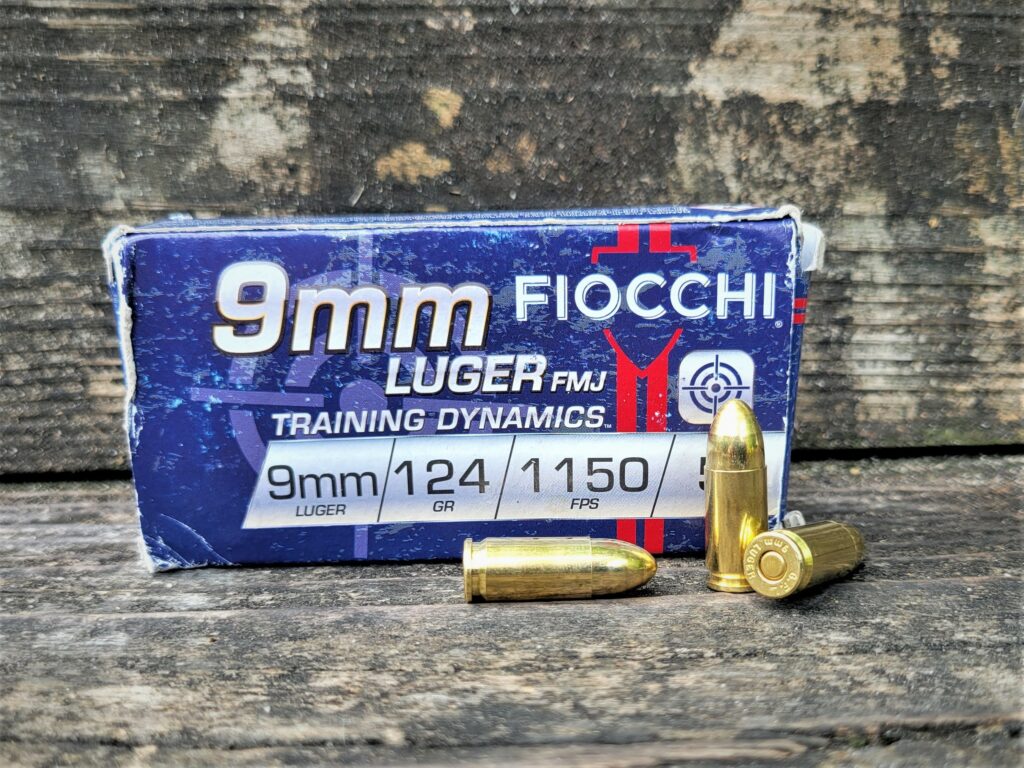 Featuring clean-burning powders, non-corrosive components, and an affordable price tag, Fiocchi Training Dynamics are perfect for high-volume shooting. Whether you’re mastering shooting basics or running repetitive tactical drills, these loads will help you make the most of your training time.

The biggest difference between these loads and Fiocchi Range Dynamics is that Training Dynamics feature a brass jacket in place of the traditional copper. While comparing the two isn’t exactly pitting apples against apples, it is pretty darned close.

We used a chronograph and a Glock 17 to get an impression of the consistency and performance Fiocchi Training Dynamics offers on a real-world range.

Extreme spread (ES) is the spread between the highest and lowest velocity in a group. Variations in velocity affect performance, especially at longer ranges. Slower bullets will drop more over distance and hit your target lower as a result.

Extreme spread is far more important for rifle loads than pistol loads, but this figure gives us an idea of the range of performance we can expect in any given box of Fiocchi Training Dynamics ammo.

Standard deviation (SD) measures the variation from the average velocity of our test rounds. There’s a bunch of math involved, but basically, you want low numbers here.

A smaller SD indicates most rounds performed close to the average, which is an indication of consistency. Consistent velocity should translate to consistent on-target performance. 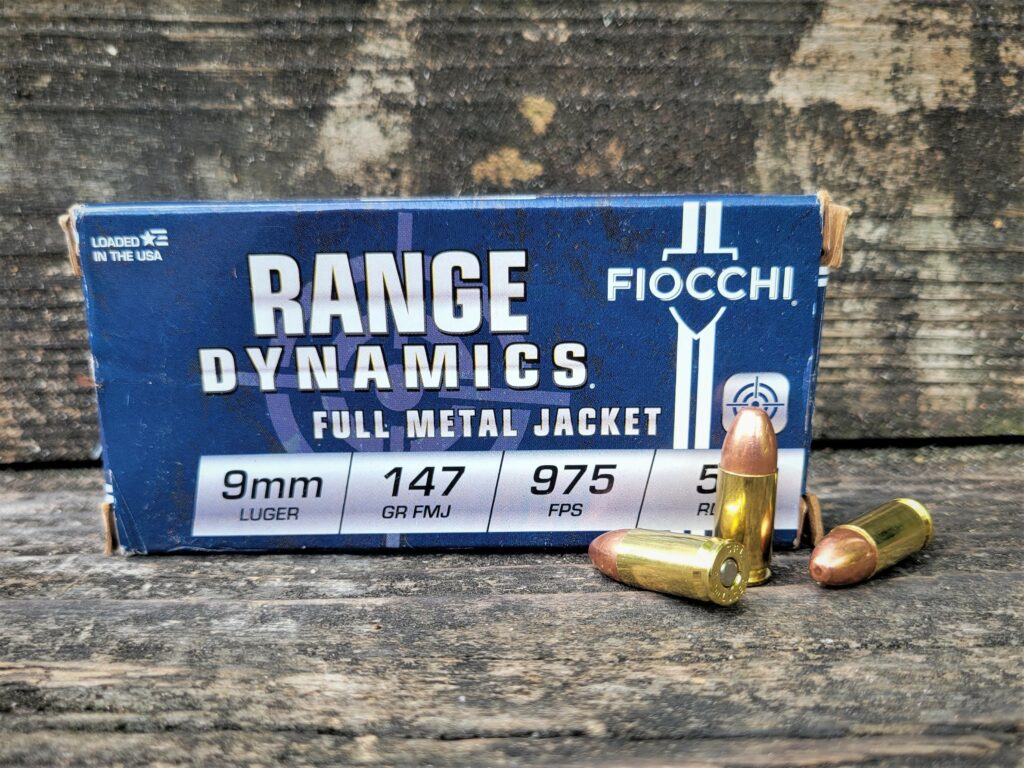 Range Dynamics is Fiocchi’s renamed training line. These loads are designed to be ballistically similar to their defensive ammo.

We compared these to Fiocchi Extrema XTP loads in the same grain weight. Not only were the muzzle velocities comparable, but we also couldn’t tell a difference in recoil or point of aim.

Once again we dragged out the chronograph and our trusty Glock 17 and hit the range.

We were surprised to find an average muzzle velocity of 999 fps, which is 24 fps faster than Fiocchi advertises.

Using the power of math, we came up with a standard deviation of 17.98, which is pretty good for a factory pistol load.

“XTP JHPs feature a shallow cavity and narrow mouth surrounded by precisely cut symmetrical serrations which are proven to expand reliably on impact even after penetrating thick layers of denim.”

We didn’t test these on denim, but they turned the inside of a pineapple to absolute mush. 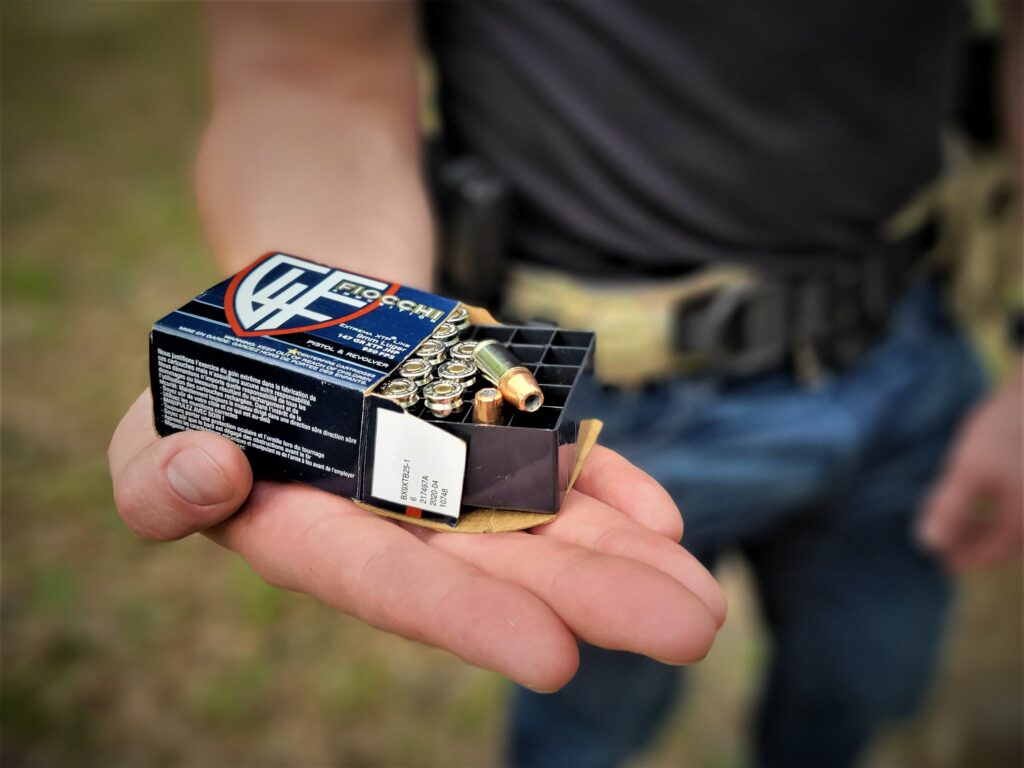 The average velocity in our Fiocchi ammo review loads was 984 fps, which is pretty freakin’ close to the advertised 980 fps. Fiocchi definitely isn’t trying to over-represent the performance of their ammo.

Our highest and lowest recorded muzzle velocities were 1007 fps and 948 fps respectively. That gives us an ES of 59 fps. While that isn’t match load accurate, it is still pretty impressive for a factory load. 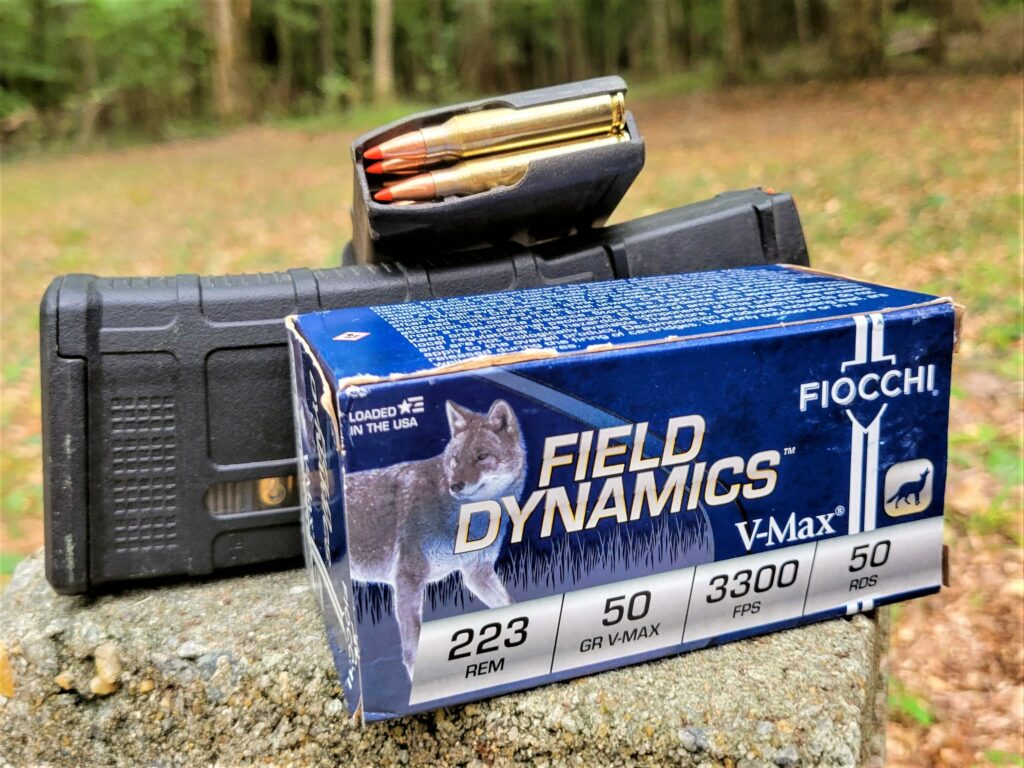 Whether you’re sniping long-range groundhogs or popping coyotes rushing in to your calls, these loads deliver excellent in-flight and on-target performance.

We haven’t had the chance to test these loads out on any ‘yotes just yet, but they kill pineapples pretty efficiently. 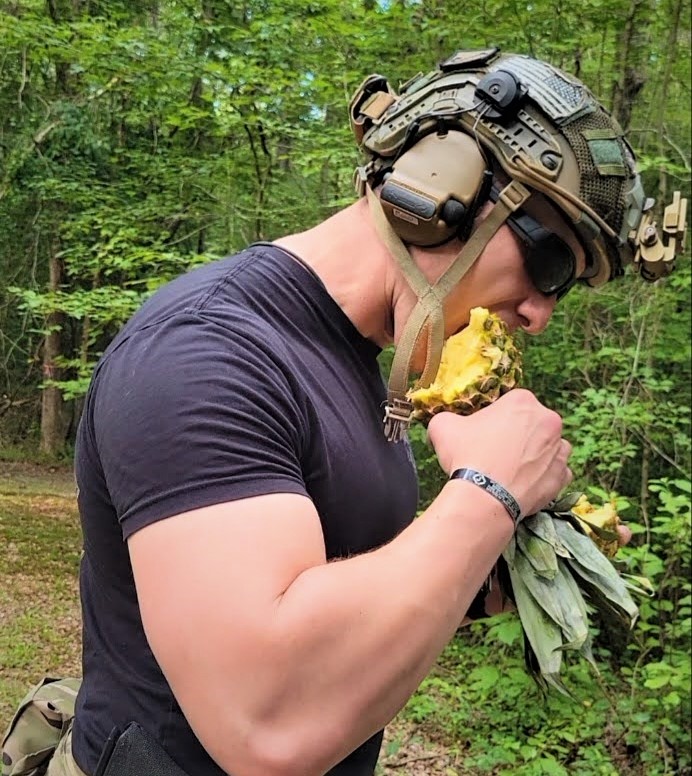 We lugged our chronograph and a mil-spec AR-15 with a standard 16-inch barrel and a 1:7 twist rate to the range to test these varmint loads.

We shot approximately 100 rounds of Fiocchi Field Dynamics and came up with an average muzzle velocity of 2936 fps. That is significantly different than the advertised 3300 fps on the box. In fact, we only had one round that registered faster than 3000 fps out of the whole batch.

Chances are our rifle’s 16-inch barrel is shorter than whatever test barrel Fiocchi used, which could cause our bullets to lag behind the specs from the company’s sterile testing facility.

We calculated this load’s standard deviation at 53.46. While you definitely won’t be winning any PRS matches with these loads, they are consistent enough to satisfy most varmint hunters.

All-in-all, we ran 500 rounds of Fiocchi ammo without a single hitch. So, yeah – we were impressed with the ammo and would classify it as a good option for range training.