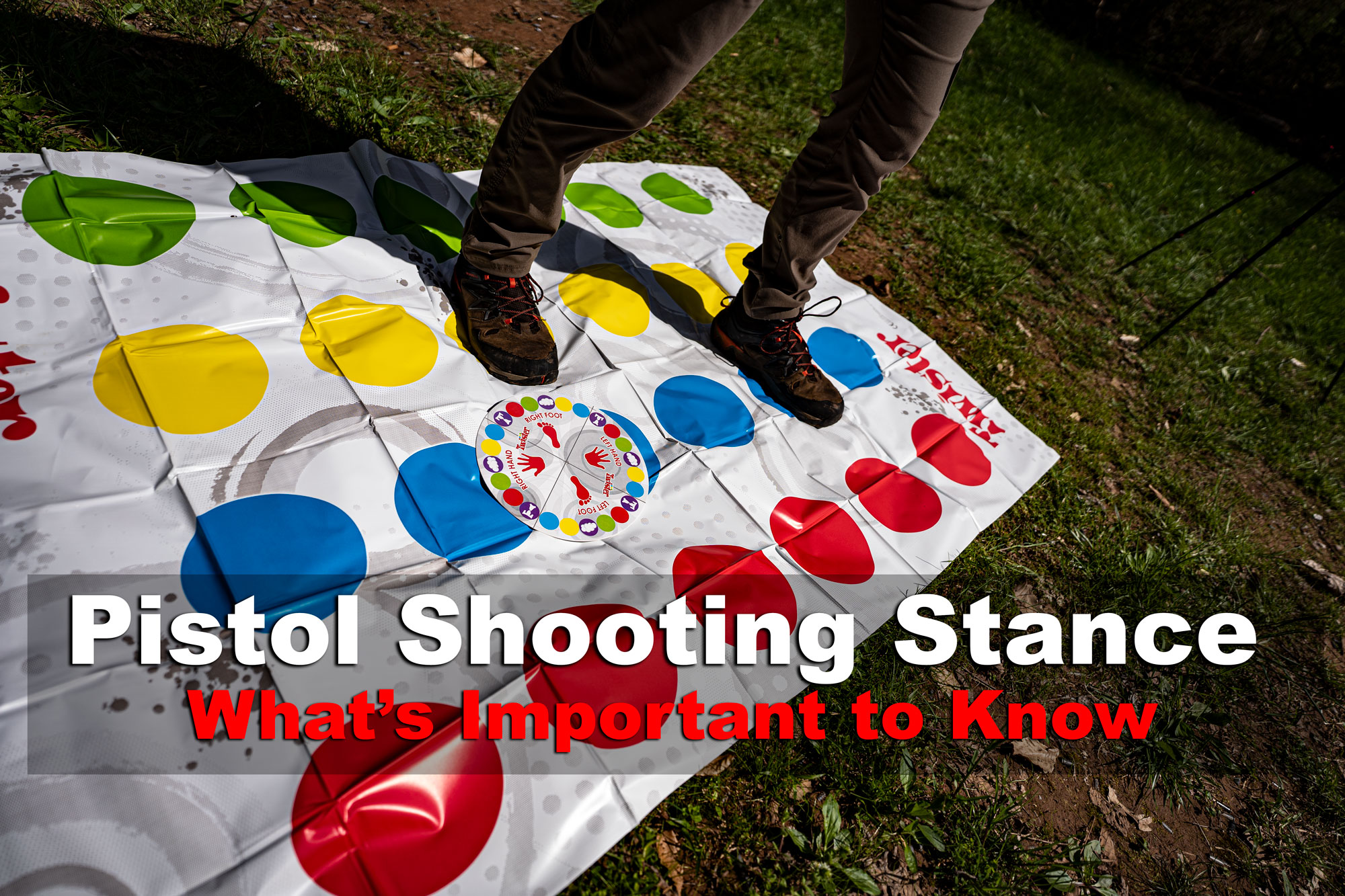 Your stance is the base for everything else. Get it right and you’ve laid a solid foundation for consistent training gains. Let’s explore some of the basics of a good pistol shooting stance.

The basics of pistol marksmanship apply whether you’re shooting for self-defense, match competition, or simply plinking cans off fence posts. In many ways it all starts with the ideal pistol shooting stance.

It is easy to focus on proper grip and sight alignment while neglecting a proper stance. After all, the gun gets all the glory because that’s where all the action happens. Why should it matter how you’re standing when the bullet is going to exit the muzzle the same way whether your feet are in a Weaver stance or a ballet arabesque?

However, stance is one of the most crucial elements of shooting.

The Foundation of Consistent Performance 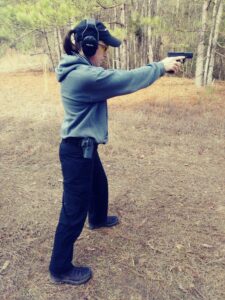 A solid pistol shooting stance provides a stable foundation for your shooting platform.

Contractors never build a house starting with the roof and walls. If they did, the homeowners would end up with a pretty rickety structure. With the first strong gust of wind, that house would topple to the ground. It doesn’t matter how well the walls and roof are built if the foundation of the structure isn’t up to par.

The same is true of your shooting form. Trigger technique, sight alignment, and sight picture can make a really nice “roof.” Spend hours of range time and dry fire practice perfecting these, and you’ve got one seriously fancy building cover. However, no roof, no matter how precisely or elaborately built, is going to hold up if it isn’t built over a firm foundation.

What Makes a Good Shooting Stance? 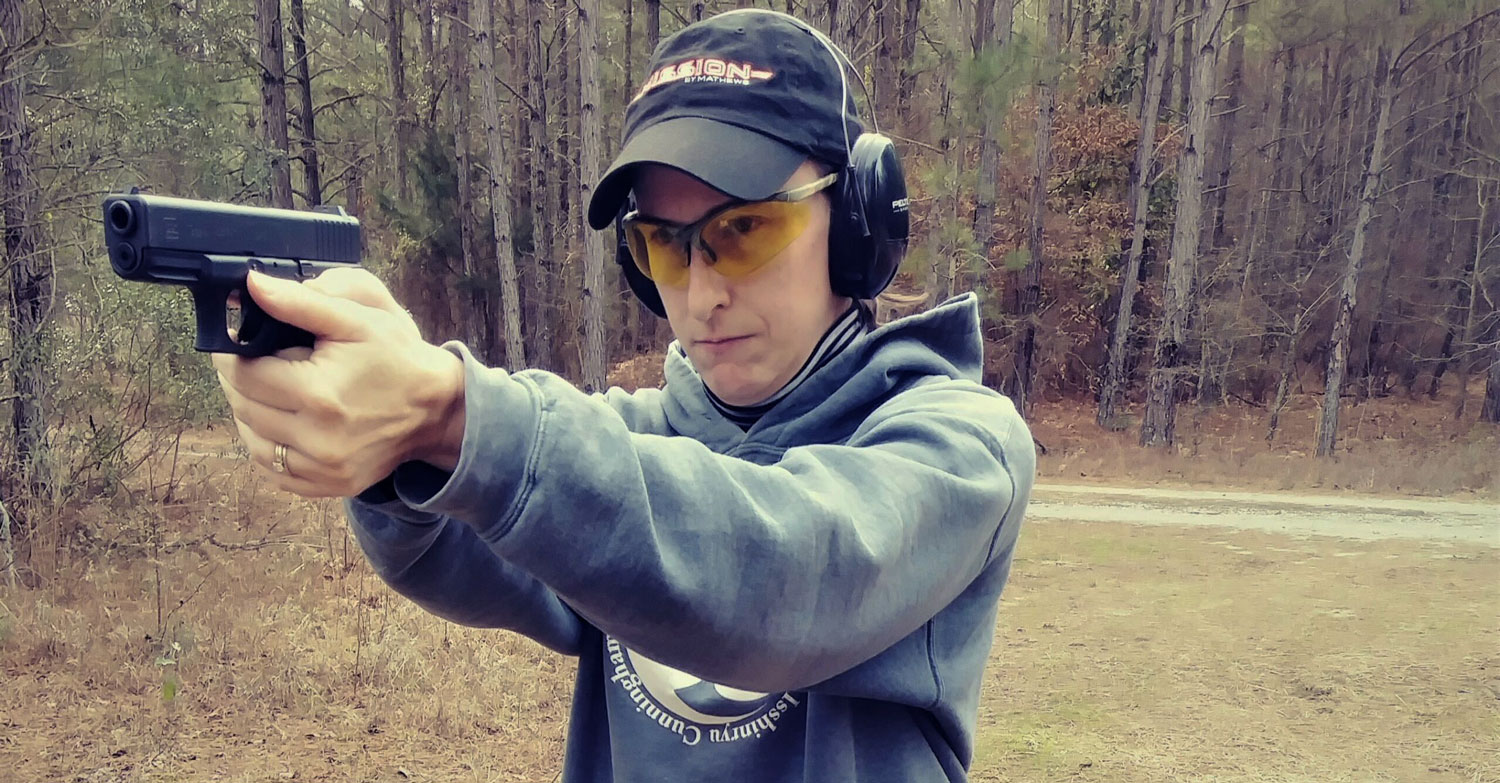 When we discuss our stance with regard to pistol shooting, we are referring to the position of the shooter’s feet and body relative to the target. Sure, that sounds like a simple concept. However, proper stance is one of the most critical aspects of shooting, and its application and importance is often misunderstood.

Many schools teach a traditional weaver stance while other share the modified Weaver stance (sometimes referred to as the Chapman stance), with the gun-side shoulder and hip angled away from the target and the support arm bent at the elbow.

Others favor an isosceles stance, where the shooter’s body faces the target squarely, with feet parallel and shoulder width apart, and both arms extended.

There are probably a thousand different ways to arrange your body in a way that allows you to make accurate shots. And while some shooters will swear on their Mama’s fried chicken that there is only one God-given shooting stance, each stance comes with its own strengths and shortcomings.

Some lend themselves to competition shooting, where pinpoint accuracy is key. Others are designed with defensive positioning in mind, which is absolutely essential for personal protection. However, all effective pistol shooting stances have a few key elements in common.

No two shooters are built exactly the same. You can’t expect a five-foot 100-pound woman to stand exactly like a professional sumo wrestler. If you don’t notice the difference in their builds, strength, and athleticism, you have to be walking around with your eyes closed.

These two hypothetical shooters provide one obvious reason we shouldn’t use an assembly line approach to shooting stance. We can stand these two shooters in pre-painted footprints on the shooting range floor and neither one will be a better shot for it. Instead, we should help them find a good stance for their bodies based on the principles of balance, not some cookie cutter notion of foot placement.

In any decent shooting stance, the feet should be about shoulder width apart. This will look very different for our sumo wrestler than it does for our female shooter. Smaller framed shooters may actually feel more comfortable if their feet are slightly wider than shoulder width. That’s okay. Foot placement should be comfortable, which may look slightly different for each individual shooter.

However, “approximately shoulder width” is appropriate for every major shooting stance, even if one foot is positioned forward of the other.

Your body is actually much smarter than your brain when it comes to balance. One way to find a balanced stance is to assume your desired foot position and close your eyes. Have a shooting buddy gently push you from different angles. If you are unbalanced, your feet will instinctively shift to prevent you from falling over.

The place your feet naturally land when you are pushed is ultimately going to be a better position of balance than the one you started with. Leave them there and have your buddy attempt a few more gentle shoves. Chances are, your new stance won’t allow your buddy to shove you all over the range. Congratulations, you’ve just found the balance sweet spot from which you can build a proper shooting stance.

Once you’ve found that balance, practice it frequently (not just at the shooting range) until it becomes an automatic part of shooting. You want your stance to be reflexive, just like the rest of your form. If you can find your stance automatically, it will make it a lot easier to shoot effectively if you ever have to fire your weapon under duress.

Regardless of where your feet are on the ground, you should lean slightly into your weapon with your knees slightly bent and your body weight heavier on the balls of your feet. You don’t want to rock back on your heels. Instead, you want your weight moving forward. This will help your body absorb recoil once you start shooting.

Your body weight should also be evenly distributed between both feet. By having your weight divided evenly, it makes it easier to move in either direction quickly and efficiently. Mobility is important in a self-defense situation and leaning too heavily on one foot or the other locks that foot in its position.

Many inexperienced shooters seem to instinctively lean away from their firearm. This is an especially common issue with female shooters, although plenty of men also make this mistake. It is almost as if the shooter is trying to get as far away from the firearm as possible, which is understandable since firearms tend to produce recoil and loud noises. However, it is important to overcome this natural fear response or your accuracy will seriously suffer.

Leaning back bends the shooter’s spine, quickly leads to fatigue, and creates some major imbalance issues. This backward leaning posture does not effectively absorb recoil. Since the shooter is already leaning back, recoil pushes them further back with each successive shot. As a result, shots begin to creep north of the target center.

No matter which stance you choose, your head should stay mostly upright or tipped only slightly to the side. You want to bring the gun up level with your eye rather than leaning down so your eye meets the gun. The shoulders will be slightly rounded forward, pushing toward your target.

Further, target shooting is a far cry different from defensive shooting. Paper targets don’t shoot back. Fear can send a cocktail of hormones and adrenaline coursing through your entire body in just a few milliseconds. Those chemicals are going to wreak havoc on your shooting technique. (Heck, your body releases a ton of chemicals when you’re just shooting at the range!)

In these situations, your brain can get caught in a fight or flight loop. You want your body to react instinctively when your brain is otherwise occupied. Once you have the basics of your stance figured out, practice it and your other shooting fundamentals. Working basic shooting skills until they become instinct increases your odds of success if you ever need them for self-defense. Drill these basics as if your life depends on it, and then hope it never does.

Should I Buy A Gun?