I’ve never been the type of person who gets particularly excited about Hollywood movies. If you do manage to drag me to the theater, chances are good that I’ll criticize the heck out of it, especially if the film involves any sort of shooting. I’ll call BS in a heartbeat if something is unrealistic.

So, you might be surprised that I absolutely love the John Wick movies.

For those of you who haven’t seen the first John Wick movie (What the heck are you waiting for?), it chronicles the violent adventures of a retired assassin who goes on a vengeance killing spree over the cold-blooded murder of his puppy, Daisy. Take into account that Daisy was the final gift from John Wick’s dead wife, and it’s easy to empathize with (if not condone) the main character’s violent motives. (I mean…it was a beagle puppy. Who kills a beagle puppy?)

A good one half of the movie is devoted to intense shooting scenes with plenty of gratuitous violence. However, the directors, stunt coordinators, and actors all went through some serious and intense range training to ensure the gun handling in the film is as accurate and authentic as possible. I can respect that.

They actually left very little for this hyper-critical movie goer to complain about.

If you’re wondering how Keanu Reeves could pull off playing such a badass, it’s because Keanu Reeves is a badass. Don’t believe me, watch this quick video that captures just some of his extensive firearms training.

Why is He Holding His Gun That Way?

Keanu Reeves’ badassery aside, there are probably plenty of gun guys and gals who have looked at his shooting stance and had a major what the heck moment. I mean, why is he tilting his pistol like that?

This may be the most controversial element in the whole movie. And that’s saying something since the story starts off with a dead puppy.

It’s called Center Axis Relock (CAR), and It is actually an accepted pistol shooting system, not something the director pulled out for cinematic effect.

What is Center Axis Relock?

For the “High” position, the shooter draws his or her pistol and brings it to the center of the chest, holding it parallel to your shoulders. Since the support side shoulder is already pointing toward the target, the pistol will also be pointing that way. This position allows you to quickly pull off one or more shots at an up-close attacker and can be used effectively when there isn’t enough time to raise your weapon to eye level and line up your sights. 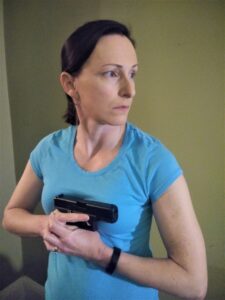 If you have sufficient time and distance, you can draw your weapon to the “Extended” position. With the support hand positioned beneath the weapon held firmly in the shooting hand, roll the gun up so that the sights align with one of your eyes (It doesn’t have to be the dominant eye since the close distance helps prevent double vision and allows the shooter to keep both eyes open).

Be sure to raise the weapon to your line of sight. Do not lower your head to meet the gun.

When in the extended position, the shooting hand will be positioned on top, allowing the wrist to stay aligned with the forearm. The opposite hand provides support from underneath. In this position, the gun will be canted at a slight angle.

Use the support hand to pull back on the weapon while the shooting hand pushes forward (just like the Weaver Stance). The push/pull effect produces isometric tension that helps create a stable, locked-in position. The canted position also helps eliminate flex in your shooting side wrist. This all works together to help control recoil and tame muzzle flip, allowing you to get back on target quickly.

A Brief History of the Center Axis Relock

It may surprise some critics (and there are many) that the Center Axis Relock position did not originate on a Hollywood movie set. It is a real life shooting technique created by law enforcement trainer, Paul Castle.

Before Castle succumbed to cancer in 2011, he developed the Center Axis Relock (CAR) system. CAR is actually an integrated combat system for shotgun, rifle, and pistol shooting. The system was designed for military and law enforcement applications, not fictitious assassins.

Thanks to the John Wick movies, Center Axis Relock has become about as trendy as craft beer, only this craft beer doesn’t totally suck.

The deep, staggered stance of Center Axis Relock is similar to stances common in many traditional forms of martial arts. The concept is to harness the power of the body’s natural center axis (which is where the stance gets its name). The base of the stance provides plenty of stability and allows the shooter to use his or her firearm almost as an extension of the body.

CAR particularly dominates in close quarters encounters, where speed, efficiency, and weapon retention are crucial to being able to walk away alive.

There’s no arguing that CAR allows you to put lead on target fast. When you only have nanoseconds to respond to a rushing threat, the “high” position lets you pull off shots faster than any other stance in the common shooter repertoire. From the “high” position, you can use your natural point-and-shoot instincts to engage a target already at halitosis range.

Even at the “extended” position, the weapon is relatively close to your body, which can facilitate faster reloading. And if you need to clear a stoppage, lowering back to the “high” position gives you a great angle to clear your chamber, rerack, and continue to engage.

Although point-and-shoot is acceptable when you don’t have time for anything else, getting sights on target is the absolute best way to get your rounds to hit your mark. One of the best things about this stance is how easy it is to aim.

Most other stances have the shooter holding the weapon with arms extended. This position places the weapon’s sights at a distance where it can be difficult to focus the eyes.

Many shooters experience a kind of double vision at this distance. If you focus on the target, you may see two front sights. Then, when you try to focus on the sights, you see two targets. When experiencing double vision, you might accidentally pick the wrong sight picture or the wrong target, especially when shooting under stress.

To overcome blurred sights and double vision, some shooting instructors teach their students to close one eye. The problem with closing (or even partially closing) one eye when shooting is you sacrifice peripheral vision, which is a valuable asset in a self-defense situation.

In contrast, Center Axis Relock places the sights directly in line with the eye at a comfortable focal point. CAR sets your gun sights 12 to 16 inches from your eyes. This is the distance you would typically use to read a store receipt or a business card. This is significantly closer to your eyes than the traditional Chapman or Isosceles stance.

With your sights at optimal “reading” distance and aligned with one eye, the sight and the target can appear clearer and double vision is virtually eliminated. This allows for rapid target acquisition and lets you place multiple rounds on target while keeping both eyes open. Shooting with both eyes open allows you to retain precious peripheral vision. 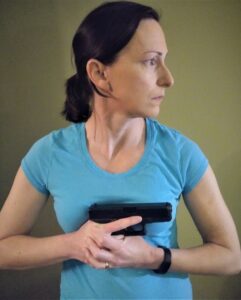 A close quarter encounter with an attacker can quickly morph into a hand-to-hand situation. Because CAR keeps the weapon close to the body, you can more easily keep your hands on the weapon should the confrontation turn into a fist fight.

The “high” position uses body ergonomics to place the weapon at a point of natural strength. Even toddlers instinctively use this position when they want to hold onto a toy a sibling is trying to take from them.  This position also allows you to protect your weapon with your body if the aggressor attempts to take it. When the attacker reaches for the weapon, you can simply pivot the torso to keep it out of reach. It is also easy (and instinctual) to use your elbows to knock reaching hands away or strike the attacker in the body or face.

In contrast, when a weapon is held at arm’s length (as in most conventional stances), an aggressor can more easily knock it out of your hands. Once disarmed, your weapon can be used against you.

Shooting from a Seated Position

One other major advantage of the CAR system is it is perfect for shooting from a seated position. Should you ever need to defend yourself from inside a vehicle, the Center Axis Relock is easy to assume and is unhindered by the tight space of a driver’s seat. CAR should really be your go-to stance should you need to shoot from any seated position. If you don’t believe me, try assuming an isosceles stance in a restaurant booth. 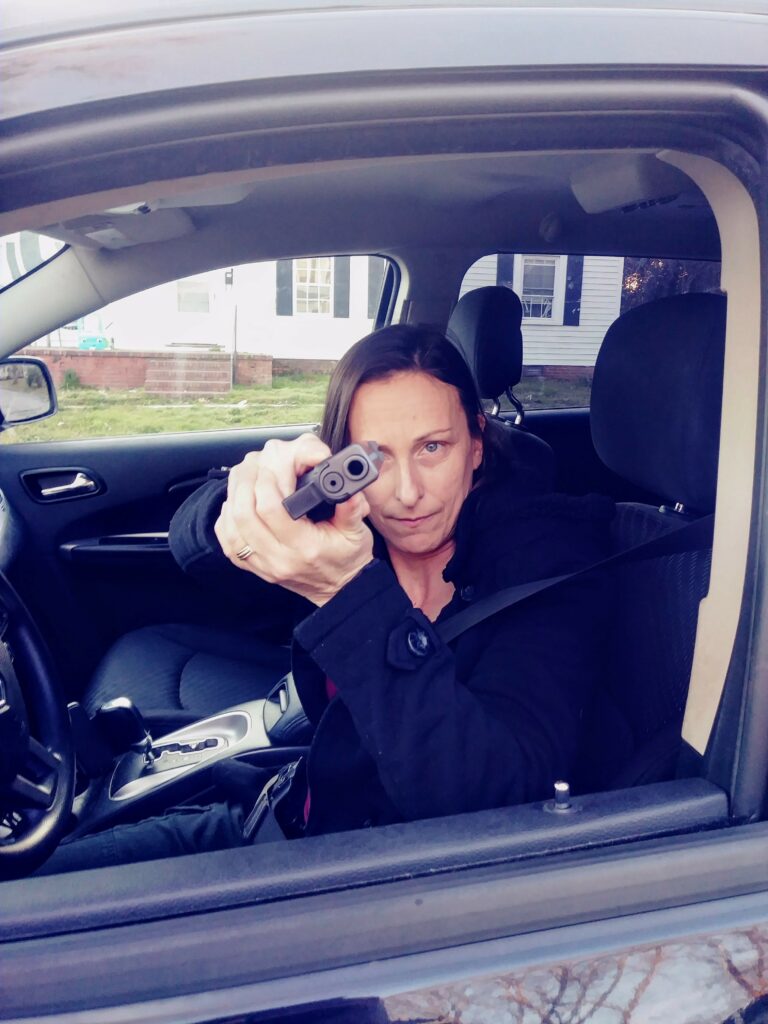 Despite its newfound popularity, Center Axis Relock has plenty of critics. Some of that criticism is simply because the stance is so unconventional. Old habits die hard, and some shooters are really set in their ways. I admit I waited until I was alone at the range to test this one out. I didn’t want to deal with the dirty looks of my fellow shooters.

However, there are some issues with the stance that go beyond dirty looks and judgmental stares.

If target shooting is your main goal, then stick with the standard Isosceles or modified Weaver. CAR is definitely a combat stance. However, even as a combat stance it has a few drawbacks.

Studies show that even highly trained shooters tend to fall back to some version of the Isosceles stance in a high-stress situation. The Isosceles stance seems to work with the natural inclinations of the mind and body during a massive adrenaline dump. Since that’s the stance you’re most likely to use during a violent encounter, it makes sense to spend some serious time practicing it. Why fight nature by forcing CAR in a high-stress situation?

One minor drawback to the “extended” position is the proximity of your face to flying brass casings. Although this is more annoying than dangerous, expect hot brass casings to bounce off your hat (if you’re lucky enough to be wearing one). However, flying brass should be the least of your concerns during a life-or-death altercation.

Some CAR critics also claim the stance limits shooter mobility. I’m certainly no expert on the CAR system (although I do have an extensive self-defense background). It’s possible those critics are right. However, I’m going to let this video address the mobility issue. Perhaps the critics just haven’t run enough shooting drills.

Here is a brief rehash of the benefits and drawbacks of the Center Axis Relock system.

No single shooting stance will be perfect for everyone in every shooting situation. No matter what your preferred stance, CAR is a good one to throw in your defensive shooting tool box. Not just because it looks cool, either.

Unlike John Wick, who goes out looking for trouble, we want to be in as few gunfights as possible. But having the skills to survive an armed engagement is a worthwhile goal, even if you aren’t a retired assassin hellbent on revenge over a dead puppy.

The Weaver Stance – What It Is and How it Works