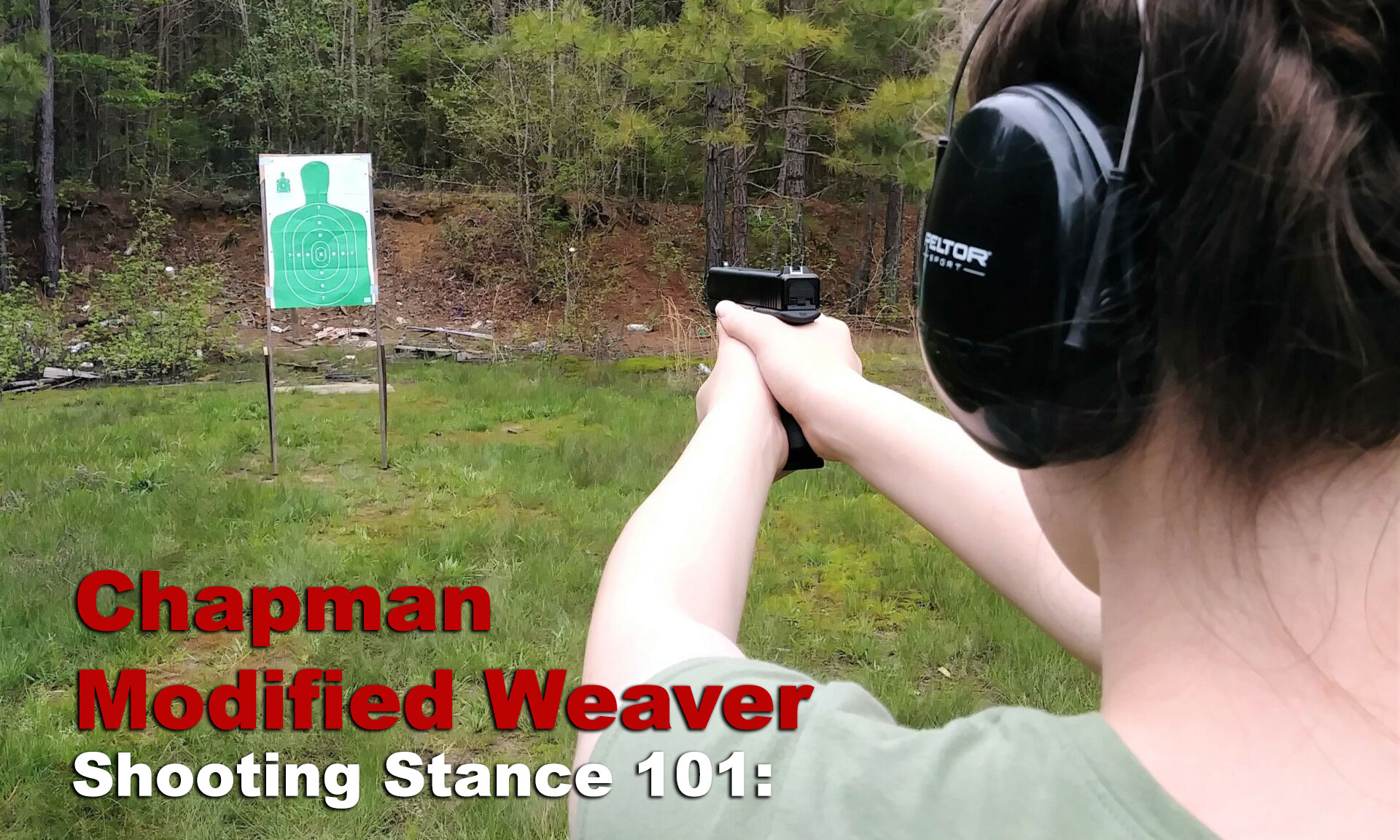 An in-depth look at the Chapman shooting stance – also known as the modified weaver stance. What is this shooting stance good for and is it something you should consider adding to your toolbox? Let’s find out!

Most shooters have pretty strong opinions about their shooting stance. The subject of which stance is best for pistol shooting is hotly debated on internet forums and social media with frightening regularity. There isn’t anything that remotely resembles a consensus, because there is no such thing as THE perfect stance.

However, there are plenty of stances to choose from. Try enough and you’re bound to find one that suits your shooting style, body type, and personal preferences.

This article dives deep into the Chapman shooting stance (often called the Modified Weaver stance). The Chapman stance has plenty of devoted fans, but it won’t be a Cinderella fit for every shooter. Let’s take a closer look.

A Brief History of the Chapman Stance

Like the Weaver stance, a competition shooter from California developed what we know today as the Chapman stance.

Ray Chapman, an original founder of the International Practical Shooting Confederation (IPSC), pioneered the technique. He modified the classic Weaver stance to better suit his shooting style and then used it to win the first ever IPSC Handgun World Shoot, which was held in Zurich, Switzerland in 1975.

Chapman also taught this stance in his Chapman Academy of Practical Shooting, helping spread its popularity. Today, it is one of the most popular pistol shooting stances in the world.

What is the Chapman Stance? 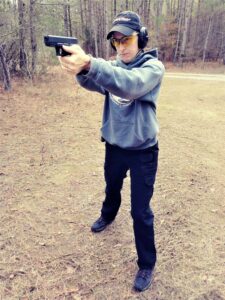 The Chapman stance uses the same basic foot position as the Weaver stance. Resembling a traditional boxing stance, the Chapman stance positions the feet approximately shoulder width apart, with the knees slightly bent, and the strong side leg slightly to the rear. The toes of both feet point toward the target, but the torso is angled slightly, minimizing the shooter’s profile. Some shooters prefer to angle the toes of the rear foot away from the target, resulting in the body angled more sharply away from a head-on threat.

The primary difference between the Chapman and the classic Weaver stance is arm placement. In the Chapman stance, the shooter’s strong arm is fully extended and the support arm is bent with the elbow pointing toward the ground. This contrasts with the Weaver stance, which calls for two bent arms and an isometric push-pull effort between the support arm and the shooting arm.

Some shooters use the extended strong arm of the Chapman stance like they would a rifle stock, leaning over to create a “cheek weld” against the shooting side bicep.

The Chapman/Modified Weaver Stance as a Fighting Stance

One of the greatest benefits of the Weaver stance (and the Chapman by default) is it is built on a natural fighting stance. The lower body position is almost identical to the stances commonly found in combat arts. Warriors have been using this same basic stance for millennia, and it works well for a number of weapons systems (think swords and rifles particularly).

By dropping one foot slightly to the rear, the shooter gains solid four-way stability. To fully understand how solid this stance is, try assuming the proper foot position and then have a buddy bump you from the front, rear, and sides. This foot rearward stance helps you stay on your feet, even when you are bumped, pushed, or hit from those directions. This a major asset when it comes to weapon retention, as well as increasing your mobility. Staying on your feet is crucial to both controlling your weapon and moving out of the way of aggressive attackers.

Another combat advantage to the Weaver/Chapman body position is it naturally blades your body away from an oncoming threat. This presents a smaller target area toward an attacker. The smaller target area is one reason boxers and MMA fighters use an angled stance. The smaller the portion of your body that faces an opponent, the harder it is for that opponent to make contact. This is true whether the attacker is trying to hit you with fists or bullets is immaterial. 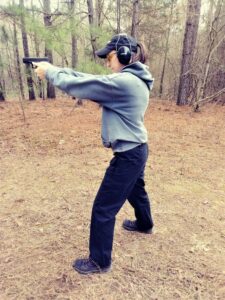 The major difference between the classic Weaver stance and the modified version is the arm position. The Chapman stance replaces the Weaver’s two bent elbows with a straight gun-side elbow and a bent support-side elbow. Like the Weaver stance, the Chapman employs a push/pull grip component.

The locked arm position allows the body’s skeletal structure to absorb the bulk of the firearm’s recoil. This one small change in arm position means the shooter uses less muscle in recoil management, which makes the Chapman an excellent option for shooters with limited upper body strength.

The Benefit of Consistency

When it comes to accuracy, consistency is key. Consistency in all elements of shooting – including sight alignment, trigger pull, and shooting stance – ultimately allows you to put more rounds on target.

The Chapman stance provides a more consistent shooting platform than many other popular shooting stances, particularly the Weaver stance. Because the Weaver stance uses two bent arms, there can be slight differences in positioning every time the shooter assumes the stance. It is difficult to bend the elbows exactly the same way every time a shooter presents his weapon.

However, a locked arm is a locked arm every time. Because the Chapman stance calls for a fully extended strong arm, variations in arm position are minimized. Locking the elbow makes it easier to hit the stance consistently every single time. The result of consistent form is consistent shooting.

The locked arm can also act as a makeshift rifle stock. The cheek weld some shooters create with their bicep creates another point of contact, and hence another point of consistency. Pressing the cheek into the same part of the arm every time the shooter assumes the stance helps iron out inconsistencies in form. (Think of it like an archer’s anchor point.)

The extended arm also allows for finer shot alignment when compared to the close-in arm position of the Weaver stance.

Each of these elements combine to increase consistency in form, creating what many shooting experts consider the most accurate two-handed stance a proficient shooter has at his or her disposal.

Disadvantages of the Chapman Stance

Although the Chapman stance was developed to help compensate for the disadvantages of the classic Weaver stance, it still has some flaws.

Not the Best Option for Body Armor

Developed before body armor was standard issue for law enforcement personnel, both the Weaver and Chapman stances were designed to limit an attacker’s target area. The blading of the body limits the exposure area. However, this position becomes a disadvantage for shooters wearing body armor. The angle of the torso actually exposes the gap commonly present in the sides of modern body armor. Presenting the gap toward the threat almost defeats the purpose of wearing body armor in the first place.

Because the shooter sights down the dominant arm, the Chapman stance creates some difficulty for cross dominant shooters. (Cross-dominant shooters are dominant with one hand and have their dominant eye on the opposite side of the body.)

Some cross dominant shooters compensate by adjusting their head to lean over the firing arm. However, this position can place some serious stress on the neck muscles. It also sacrifices the shooter’s peripheral vision. Although it may be adequate on the shooting range, the limited field of vision can be dangerous in a self-defense situation.

That extended arm can also hinder some of your upper body mobility. A straight arm actually makes it more difficult to swivel the torso to face multiple targets.

Roy Chapman modified the classic Weaver stance in an effort to solve some of its shortcomings. Although most shooting experts agree the Chapman stance is an improvement over its predecessor, it is far from perfect.

Here is a quick summary of the pros and cons of the Chapman/Modified Weaver stance. 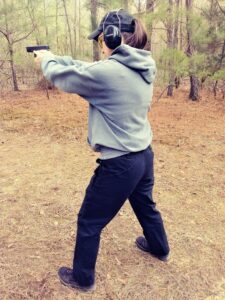 It is a natural fighting stance, and the position of the lower body is ideal for self-defense.
Foot position provides balance and mobility.
The bladed torso position provides a small target.
The fully-extended arm allows the shooter’s bone structure to help absorb recoil.
The locked arm and “cheek weld” increase shooter consistency.
The arm position is easier for shooters with limited upper body strength.

Aiming is awkward for cross-dominant shooters.
The angled torso can expose the side gap in the shooter’s body armor.
The extended arm position makes it more difficult to swivel the upper body.

The Chapman stance may not be the best stance for everyone (particularly shooters wearing body armor). However, it is a versatile stance that works well for a large number of shooters. Even if the Chapman isn’t your preferred stance, it is a tool you should consider adding to your toolbox of shooting skills.

Whichever shooting stance you prefer, you need to practice it until it becomes almost instinctive. Regular and repetitive practice helps you build muscle memory. Muscle memory is a valuable asset that allows your body to take over when your brain shifts into survival mode during a stressful encounter.

That sounds like the perfect excuse for spending time at the gun range.

The Weaver Stance – What It Is and How it Works