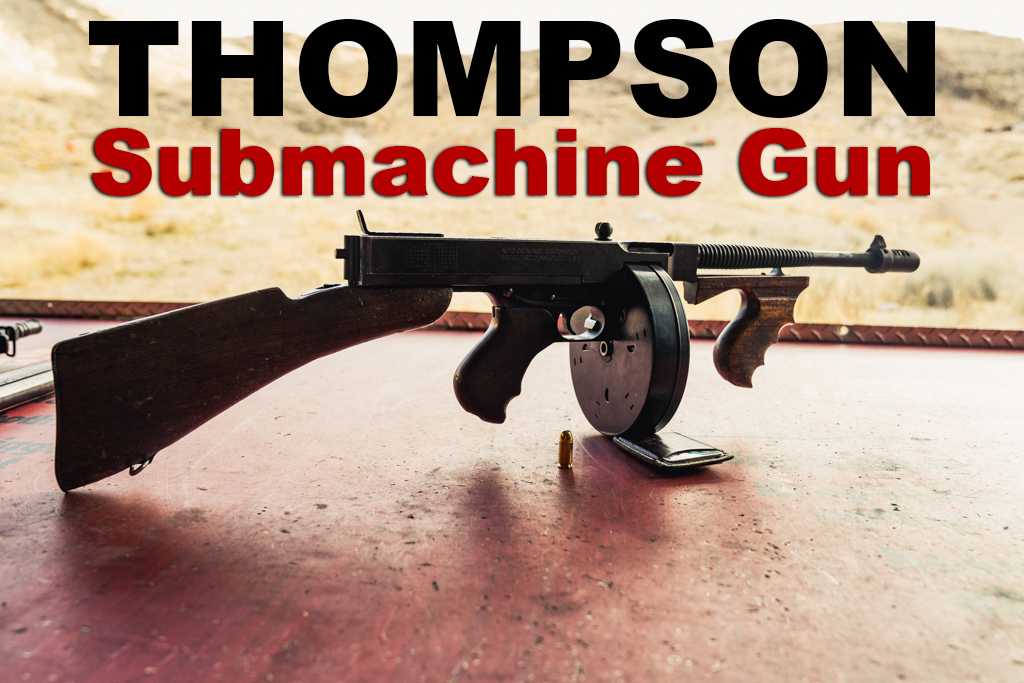 A look at the history and capabilities of the iconic Thompson Submachine Gun.

Odds are good you’ve seen a Thompson Submachine Gun. We often call it the “Tommy Gun” but many also refer to it as the “Chicago Typewriter” or “Trench Broom”, among many other nicknames. Today, we know the Thompson as one of the most impactful weapons in world history.

With numerous mechanical innovations, this weapon redesigned the battlefield, and even had an effect on pop culture. To understand this weapon, as well as modern rifles, you need to understand that history and significance of the Thompson Submachine Gun.

History of the Thompson Submachine Gun

Although American involvement in the first World War did not begin until 1917, and would last less than two years, the United States military prepared for the conflict well in advance. They increased appropriate training, including the use of gas masks and tactics for trench warfare, but many leaders felt the American troops were ill prepared, especially in weaponry.

One United States general, John T. Thompson, knew that simply sending more troops to the trenches would not break the horrific stalemate. We needed a new weapon.

At the time, soldiers were still using bolt-action rifles, which had a slow rate of fire. Thompson wanted to give American soldiers rapid-fire capabilities. So, he set off to create what essentially amounted to a compact machine gun.

His first prototypes used high-powered rifle cartridges, but he soon learned that they delivered too much force, causing a variety of mechanical issues inside the rifle. Instead of designing a new cartridge from scratch, Thompson and his team found .45 auto ammunition gave adequate functionality while delivering effective firepower. While it may not have the velocity, energy, or distance of a .30-06 rifle cartridge, the .45 ACP would give plenty of firepower at closer range, which was the purpose of this trench weapon in the first place.

To make his weapon function properly and reliably, Thompson introduced numerous innovations. Perhaps the most important change was actually an adoption from another engineer. John Bell Blish, an American naval officer and inventor, created a breech-locking system that provided the perfect process for firing, ejecting, and chambering rounds; all at lighting speed. 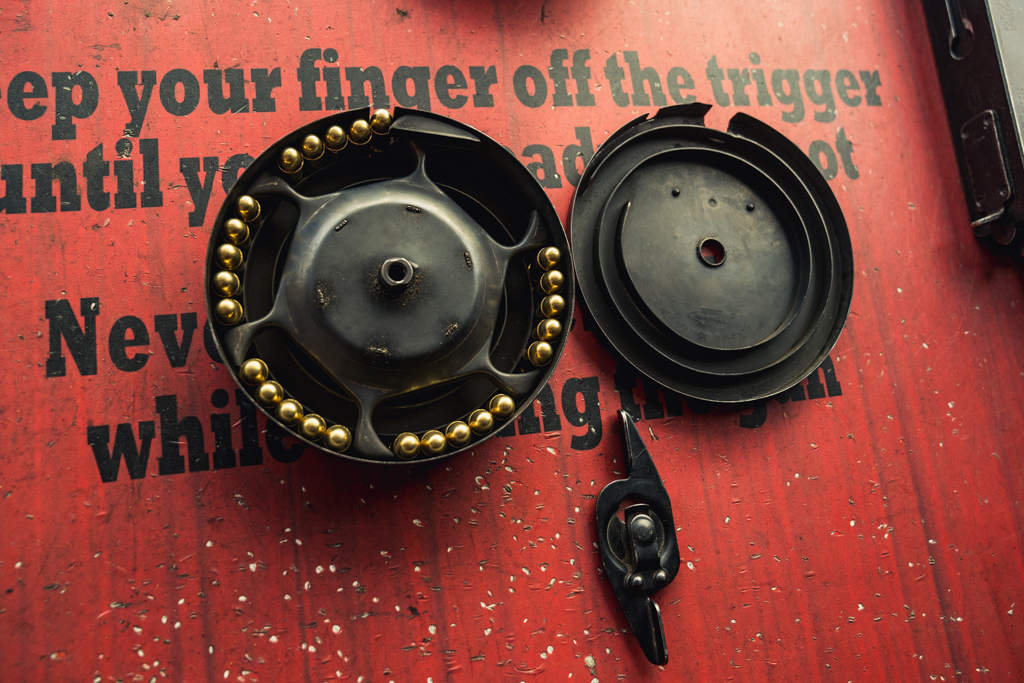 With the .45 ACP cartridge, the “Blish lock,” and the adoption of magazines as opposed to ammunition belts, the Thompson Submachine Gun was ready for the fight in Europe. But Germany and her allies surrender just days before the first prototypes got to the troops. The war was over. Wonderful news for millions of Americans and Europeans, but it left the Thompson Submachine Gun without a fight; without a chance to prove itself.

That opportunity would come not in a trench in France, but on the streets of America’s cities, as well as numerous small conflicts across the globe.

We often associate the Thompson Submachine Gun with Prohibition-era gangsters and the police officers who pursued them. This reputation, while rooted in reality, if often exaggerated.

Government organizations, including the Postal Inspection Service and the Marine Corp, were some of the first to adopt the weapon. The gun made its way into conflicts in China, and Marines used the weapon in small conflicts following the Spanish-American war in Central America.

Public awareness of the gun skyrocketed when Prohibition-era gangsters began using the weapon. Various shootings and robberies, including the St. Valentine’s Day Massacre in Chicago, were done with Thompson’s invention. Hollywood films increased certainly added to this reputation but it should be noted that there is reality in the legend of the Tommy Gun.

Militaries tested the Thompson rifle in small conflicts and it was a part of crime violence for decades. However, it truly earned its place in the pantheon of great weapons during World War II.

Although the Marine Corp had used the weapon before, the United States military fully adopted the gun in 1938. When American entered the conflict in 1941, the military issued Thompson submachine guns for scouts, tank crews, and raiding soldiers, as well as non-commissioned officers. Commando units, paratroopers, and Army Rangers all found the weapon extremely useful.

In both the Pacific theater, marked by island-to-island mobile fighting, and the European theater, which saw rural and urban combat, the Thompson Submachine Gun became a staple among the troops.

By the time Japan surrendered, factories produced over 1.5 million Tommy Guns for the military.

Weapons often fade away. More deadly or effective weaponry moves into the spotlight taking the old models’ place. While the Thompson has given way to rifles like the AK-47 and the M16, you can still find versions of this gun for sale today.

Many agencies discontinued their use and destroyed their stock of Thompson rifles by the 1980’s. The FBI, for example, stopped using these weapons in the early 1970’s.

Fully-automatic Thompsons are no longer in production, but civilian-legal semiautomatic Thompsons are popular among collectors and history aficionados. Many are elegantly decorated, and provide both a functional weapon for the shooting range, as well as a handsome collectible for firearms enthusiasts. Our team fired the Tommy Gun pictured above at a range in Las Vegas, Nevada.

Why Was the Thompson Submachine Gun so Revolutionary? 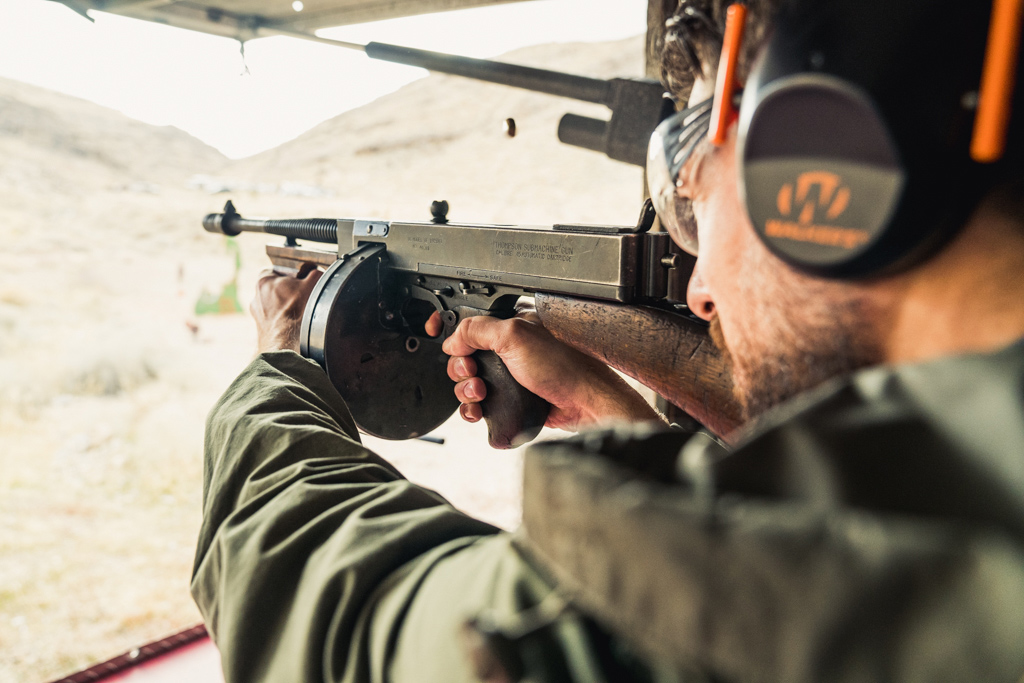 The Thompson machine gun changed the way civilians, the military, and society in general think about weaponry. But why was it so revolutionary? It was not, in fact, the first submachine gun, a distinction that belongs to the German MP 18.

The Tommy Gun achieved a variety of accomplishments hadn’t witnessed in warfare, at least by American weaponry. First of all, the weapon was light. It only weighs about ten pounds unloaded. This gives the user excellent mobility and soldiers can carry the weapon over long distances with less effort.

The Thompson featured an innovating cooling system. It used a series of ribs that increased surface space and enhanced heat dissipation, the cumbersome, heavy water-filled cooling jacket on stationary machine guns was removed.

You can easily reload it using a box or drum magazine. Other firearms required unwieldy ammunition belts. The Thompson’s relatively quick reload increased its effectiveness in a firefight.

Most of all, a single fighter can carry and bring it against the enemy. Instead of a machine-gun team, which required at least two people, a single soldier could bring a massive rate of fire to the target. This clearly has implications for combat, as history has demonstrated that rate of fire is one of the most important factors in combat. 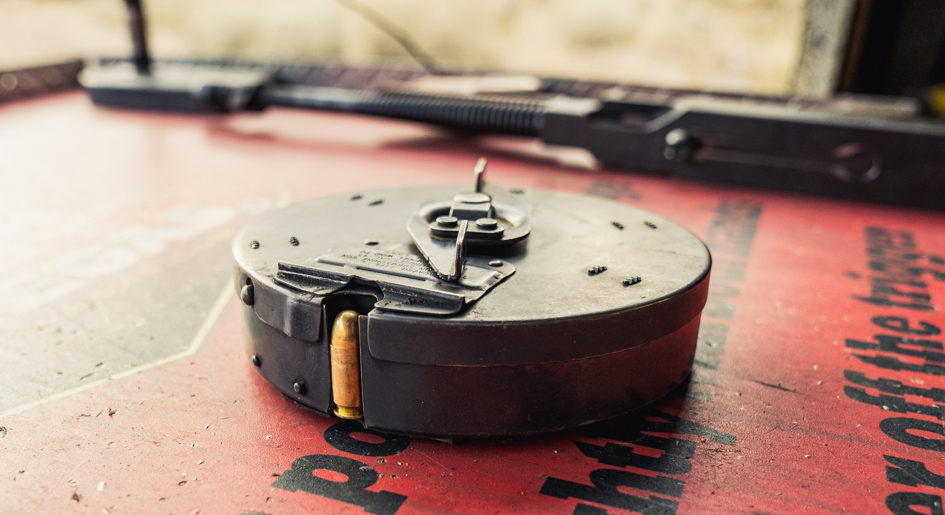 The Thompson Submachine Gun had another noteworthy advantage: it was chambered for the .45 ACP cartridge. The U.S. military already used this caliber for 1911 sidearms. This meant supply chain advantages. Notably, they didn’t need a new line of ammunition supply. Production and shipment of the .45 ACP had to be increased. This wasn’t a huge problem. Making more of the same kind of ammo is far easier, faster, and more cost-effective to implement than creating and issuing an entirely new cartridge.

For these reason, the Thompson Submachine Gun can be seen as one of the most successful, influential, and deadly weapons in history. It changed how militaries look at firepower, and brought sweeping changes to combat. Due to Prohibition-era usage and Hollywood glorification, it’s also one of the most well-known firearms among the general public.