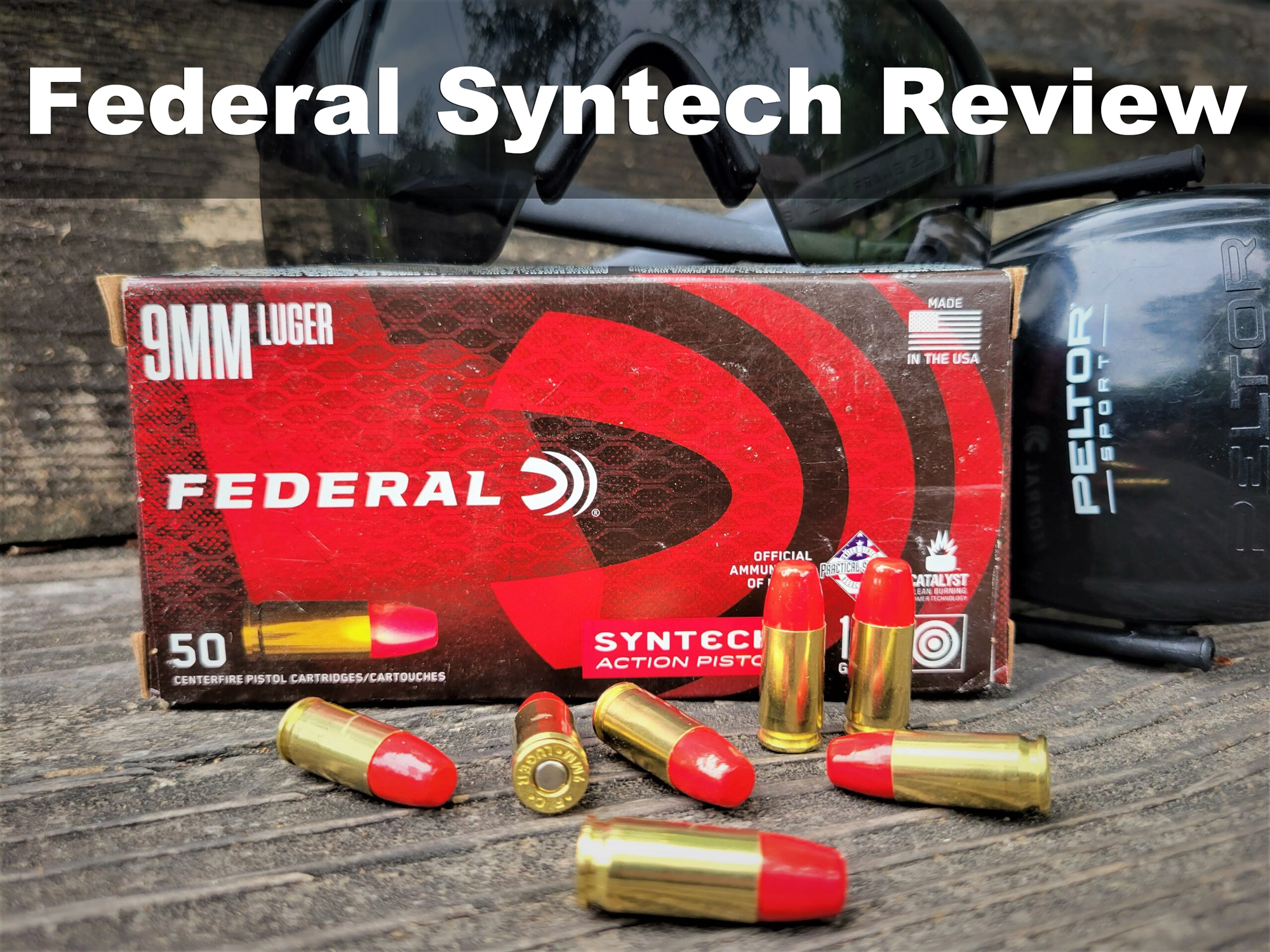 A look at Federal’s Syntech line of ammunition. What makes it different from traditional loads and what can you expect from it in terms of performance?

There haven’t been many major advances in firearm technology over the past decade. However, the amount of innovation in ammo design we’ve seen in just the past few years blows my mind. While ammunition designers are constantly pushing the envelope in accuracy and terminal ballistics, Federal Premium’s Syntech line addresses other concerns. Namely lead exposure. Let’s dive into what this relative newcomer has to offer with an overview and Federal Syntech 9mm review.

Shooting a firearm is a dirty affair. Traditional lead bullets fragment and vaporize during shooting, which exposes the shooter and anyone nearby to dangerous lead particles.

Reducing exposure to chemicals and toxins is super trendy these days, but caring about what goes into your body isn’t limited to vegans wearing Birkenstocks.

If you’re a high-volume shooter, Federal’s Syntech line could offer the clean-shooting peace of mind you’ve been looking for.

Federal Syntech loads all feature a frangible lead core under a polymer coating. Here’s a look at the Syntech line-up: 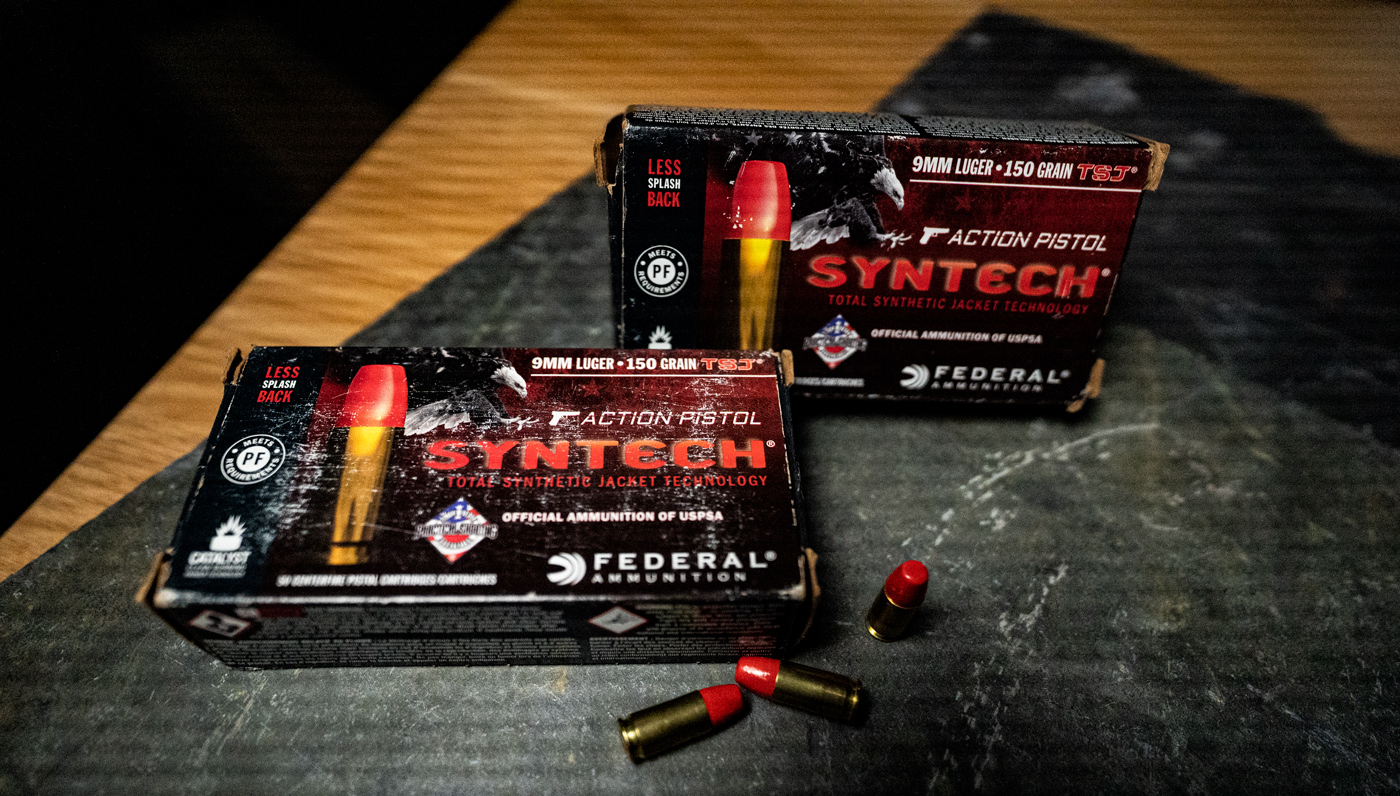 They are “designed for the action shooting sports and loaded to power factor requirements with heavy, flatter-nosed bullets for more reliable knock-downs on steel targets in competition.”

Federal Syntech Training Match loads are designed to be realistic training loads. They offer the same velocity, trajectory, and point of impact as equivalent Federal Premium Personal Defense HST and Tactical HST duty ammunition, so you can transition seamlessly from practice rounds to defense rounds.

These loads feature a vibrant purple synthetic jacket, so they are easy to distinguish from Syntech Action Pistol and Range ammo.

Unlike the other loads in the Syntech line, Syntech Defense is designed for defensive shooting, not target shooting.

The blue color-coded projectiles have Syntech’s hallmark polymer coating. However, the coating surrounds a hollow-point bullet. The hollow point is designed to separate into three outer segments and a deep-penetrating core on impact. The segments create secondary wounds, while the core penetrates up to 18 inches in soft tissue.

Aside from its bright projectile colors, Federal Syntech has several other striking features.

Those vibrantly colored bullets are actually color-coded polymer jackets. (I mean, if you’re going to use a synthetic jacket, you can make it any color you want. I’m partial to lipstick red.)

Syntech projectiles are completely encapsulated in a proprietary polymer coating designed to prevent metal-on-metal contact inside the barrel. The design eliminates internal copper and lead fouling. Reduced fouling means you won’t need to clean your firearm as frequently as you would with standard ammo. 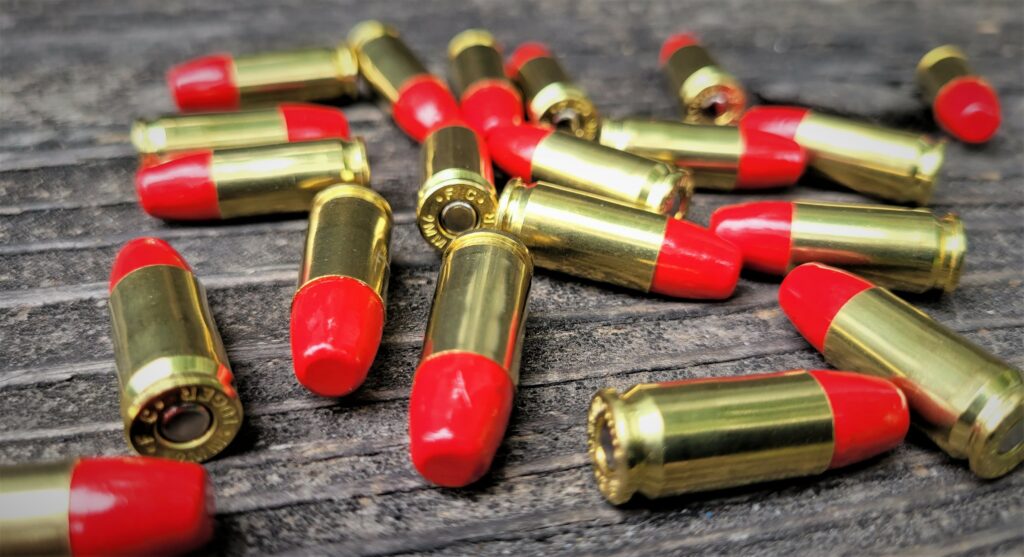 Polymer travels down the barrel with a lot less friction than copper. That copper-on-steel contact can heat up a barrel in a hurry. According to Federal Ammunition, the Syntech bullets produce 12 percent less friction and 14 percent less heat than standard jacketed projectiles.

That means Syntech should run cooler than regular FMJs.

By reducing wear and tear on the bore, shooting Syntech should also increase barrel life. That should be a major selling point for high-volume shooters.

In addition to reducing barrel fouling, the Syntech jacket also makes these rounds a safer option for shooting steel targets.

Hard copper jackets fragment when they strike steel, causing dangerous splashback that poses a risk to both shooters and casual bystanders. Small pieces of lead can bounce back from a steel target as far as 25 feet with enough energy to lodge into soft tissue.

Because polymer is softer, it doesn’t fragment in the same way as traditional FMJs. The chances of sharp polymer shrapnel flying off steel targets are fairly low.

You still shouldn’t use Syntech’s polymer jackets as an excuse for unsafe shooting practices. Syntech’s lead core could still potentially bounce back, so always shoot steel targets at safe distances.

Federal optimized their Syntech ammunition for indoor shooting by using both clean-burning powders and their exclusive Catalyst lead-free primers. These elements also keep your gun cleaner longer, so you can spend more time shooting and less time cleaning up afterward.

If you’re worried about the reliability of Syntech’s Catalyst primers, don’t. They are formulated for reliable, consistent ignition shot after shot.

Syntech does more than keep your gun clean. It also reduces exposure to lead.

Shooting lead ammo sends microscopic lead particles into the air, which can easily be inhaled. Once the dust settles, lead ends up on skin, clothing, and range surfaces, where it can be absorbed or accidentally ingested.

Lead is a toxic heavy metal that can have dire consequences. When lead builds up in the body, it can cause high blood pressure, memory problems, joint and muscle pain, headaches, and mood disorders. It can also reduce sperm count and cause other fertility issues.

Lead isn’t the only dangerous substance that should concern shooters. Other hazardous heavy metals are released during shooting, including antimony, boron, and manganese.

Syntech loads are engineered to produce a lower power factor. Power Factor takes a little math and is essential for shooters competing in USPSA, IDPA, or ICORE matches. (For those math-curious readers out there, power factor is the weight of the bullet in grains multiplied by the speed of the bullet in feet per second.)

Recoil affects more than shooter comfort. Less recoil makes it easier to tame muzzle rise, so shooters can get back on target and make quick, accurate follow-up shots.

The Proof is in the Pudding – Our Federal Syntech 9mm Review

Manufacturer claims are fine, but sometimes companies are a lot like politicians – they don’t deliver as much as they promise.

That’s why we headed to the range with an ammo can full of Federal Syntech Range and Action Pistol Ammo. Here’s what we found. 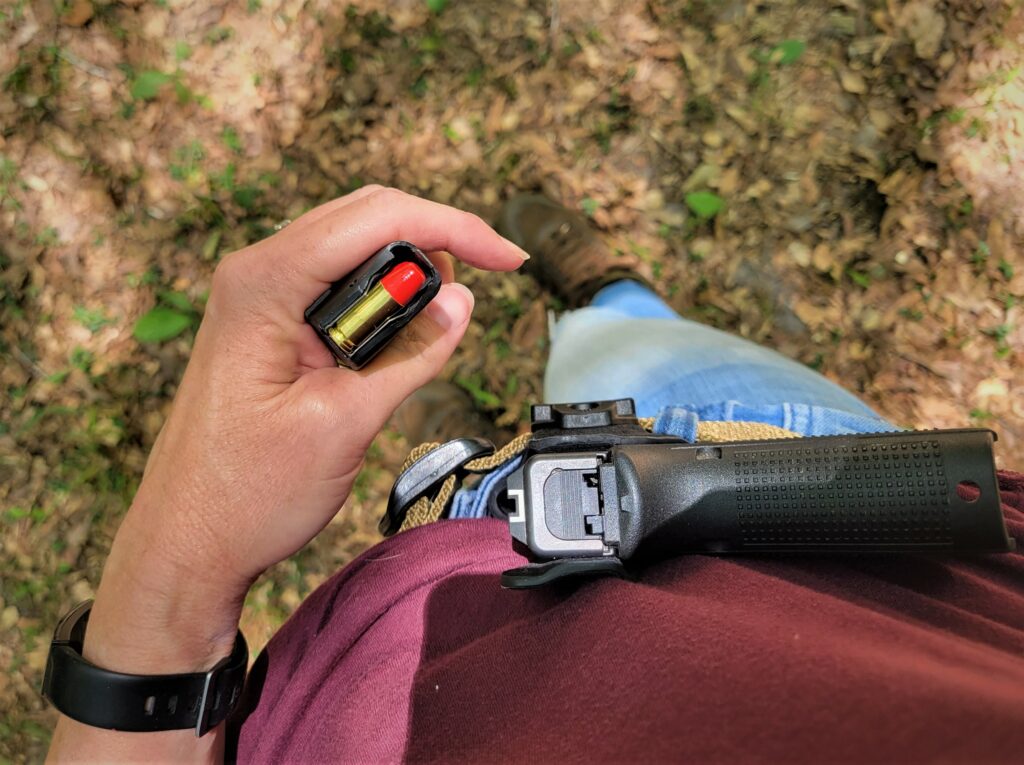 It makes sense that polymer wouldn’t shed pieces the same way copper does. Polymer is much softer than copper (or any other metal). Any bits of synthetic material that might be shed inside the barrel should burn out with later shots.

I only fired about 400 rounds, but I couldn’t find any bits of red polymer in my barrel.

Does it run cleaner? Probably.

It’s hard to gauge how much cleaner the barrel is over just a few hundred rounds. We would probably need to run a thousand or more before we could detect major visible differences.

While I wasn’t shooting steel, there are some visible differences in how polymer bullets punch holes in paper targets. “Punch” is the operative word here. The polymer bullets literally punch perfectly round holes, while standard FMJs rip jagged openings in the paper.

Syntech bullet holes remind me of wadcutter holes. They are super clean, which should theoretically make them easier to score.

While I’m not exactly a “recoil sensitive” shooter, I am a woman with feminine wrists, which means excessive muzzle rise can be a little harder for me to tame. When I read that Syntech was designed to produce less recoil, I had high hopes.

While the difference in recoil between Syntech loads and my normal FMJ practice loads was noticeable, it was incredibly subtle. If I’d had a buddy secretly swap out a magazine of my practice loads for a mag filled with Syntech, I probably wouldn’t have been able to tell the difference.

FYI, the Action Pistol loads had slightly less felt recoil than the Range loads. It was still difficult to tell much of a difference, but again… I only shot about 400 rounds. Things like recoil tend to become exaggerated the more you shoot them. I might have been thankful for that small recoil difference if I’d sent more lead downrange.

Even when we tried to measure muzzle rise, we couldn’t find a significant difference between Syntech and my normal FMJ practice loads. 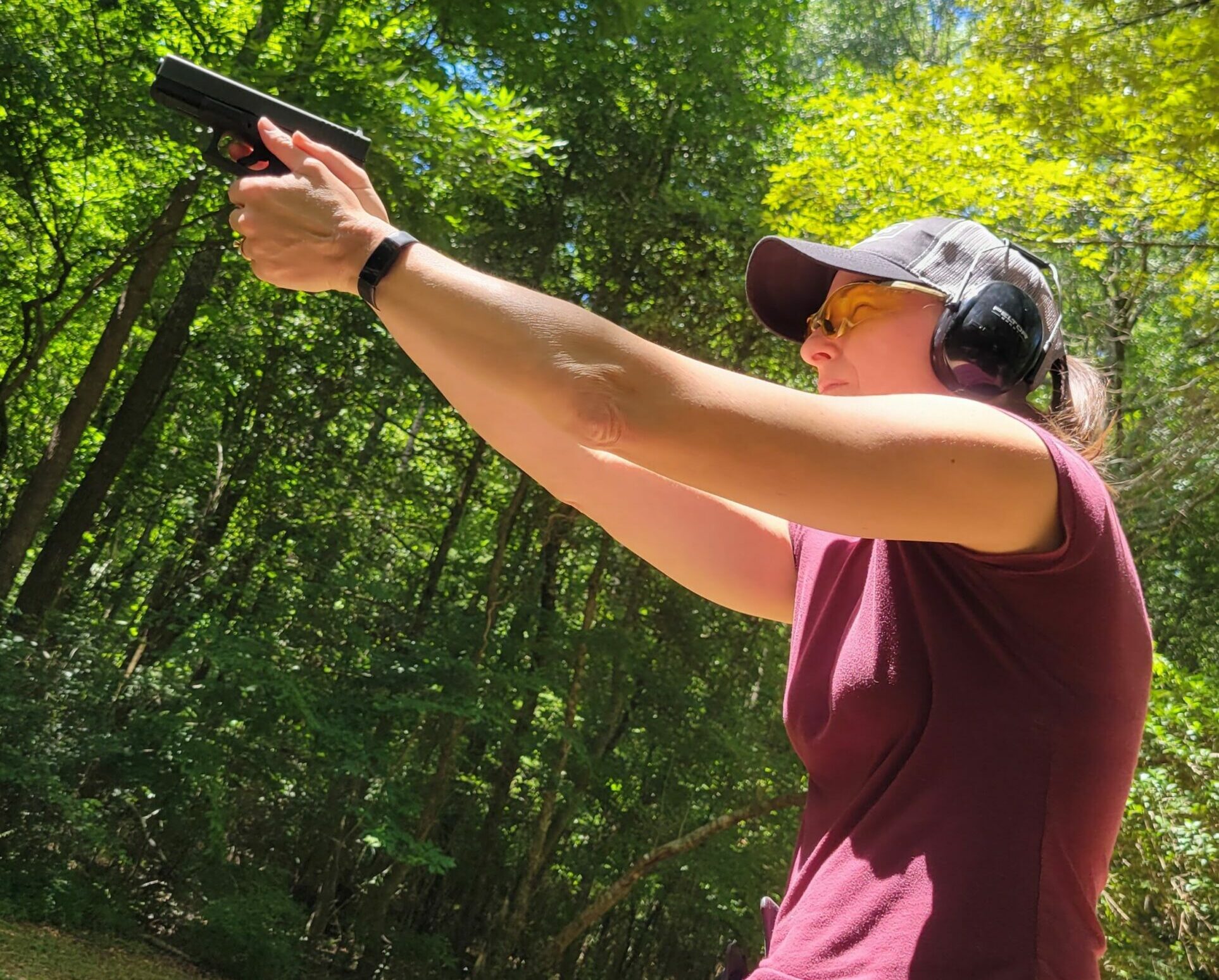 Syntech’s clean-burning primers and powders are difficult for laypeople like me to measure. I don’t have the means to measure air samples or run lab tests on lead surfaces. I’ll leave that to the scientists in white lab coats.

However, I was able to observe a major reduction in smoke. Compared to Speer Lawman FMJs, Syntech produced slightly less smoke, especially the smoke emitted through the ejection port. Most of the Syntech smoke seemed to originate from the muzzle.

I’m no scientist, but that seems to indicate less toxic blowback for the shooter.

What About Syntech Reliability?

Those candy-apple red projectiles had me feeling a little skeptical about how these loads would cycle. The fact that they are “low recoil” also had me wondering how they would run in my Glock.

I shouldn’t have worried. There were zero feeding, extraction, or cycling problems. My Glock 19 ate several hundred rounds without a problem.

Who Should Shoot Federal Syntech?

It’s essential to remember that Federal Syntech was designed for competition. While a casual shooter may only send a couple of hundred rounds downrange each month to keep his skills from turning rusty, a competition shooter sends thousands.

Every jacketed pill that travels through your barrel damages the barrel in tiny, almost imperceptible ways. Over time, standard metal jackets deliver a major beat-down on the interior of your firearm.

The average lifespan of a factory barrel is around 100,000 rounds. Few EDC weapons will spit that many bullets in their entire lifetime. A competition pistol could see that kind of action in a few dozen months.

If you’re a serious high-volume shooter, a polymer-coated, low-friction round like Federal Syntech could add years of use to your sidearm.

Syntech also has some major perks for indoor range shooters. Clean-burning propellants and lead-free primers significantly reduce lead exposure, which is crucial when shooting indoors where lead residue coats everything, including your lungs.

I’m not a competition shooter, although I probably shoot more rounds through my EDC pistol than the average defensive shooter. I prefer to practice with ammo that is ballistically similar to my carry ammo. For me, that currently means Speer Lawman, because I’m toting Speer Gold Dot in my EDC Glock.

However, I can certainly see the perks of using Syntech Range for a fun afternoon of plinking with the buddies, especially if your main goal is to ping steel.

Besides… what could be more fun than loading your plinking pistol with festive red bullets? 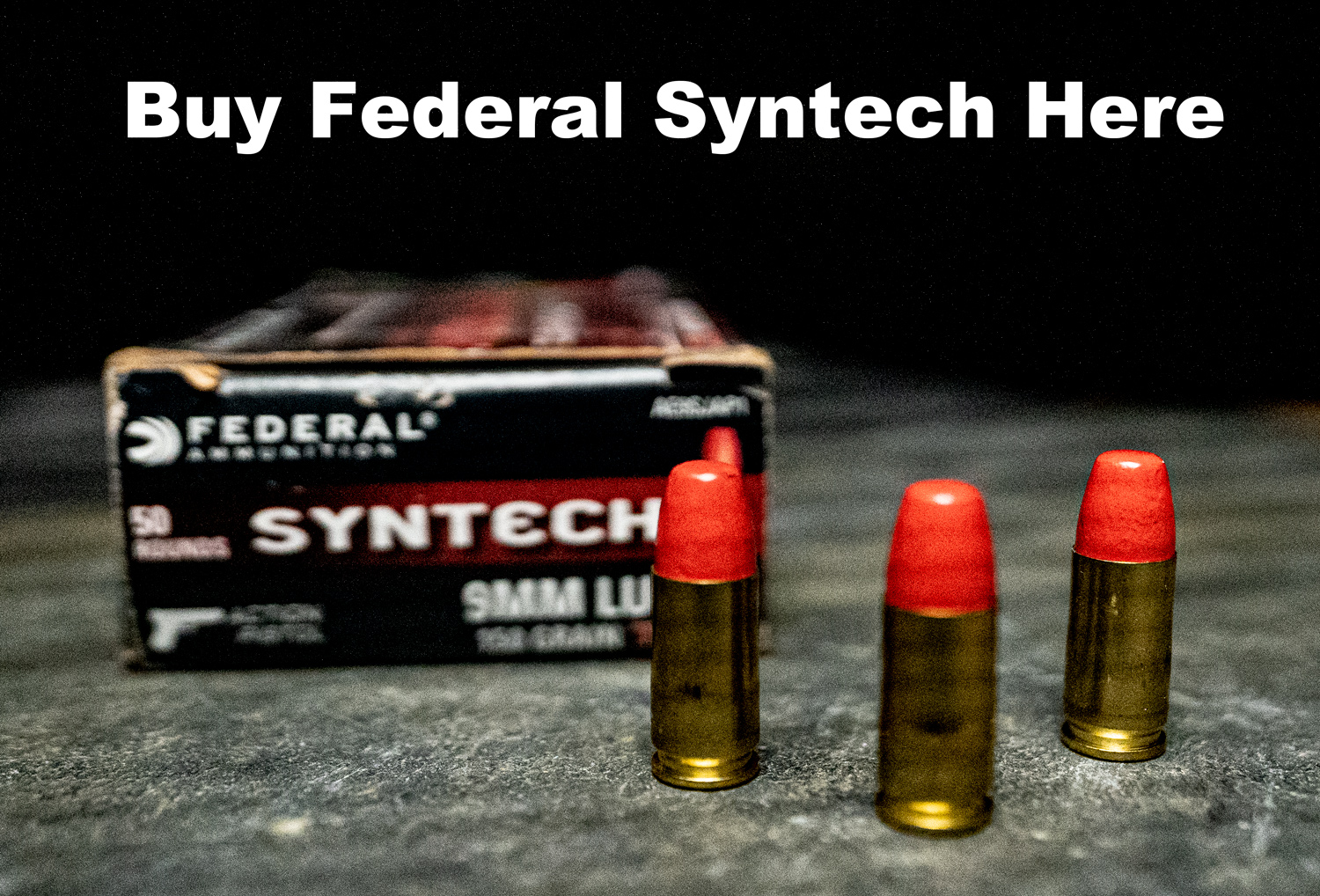