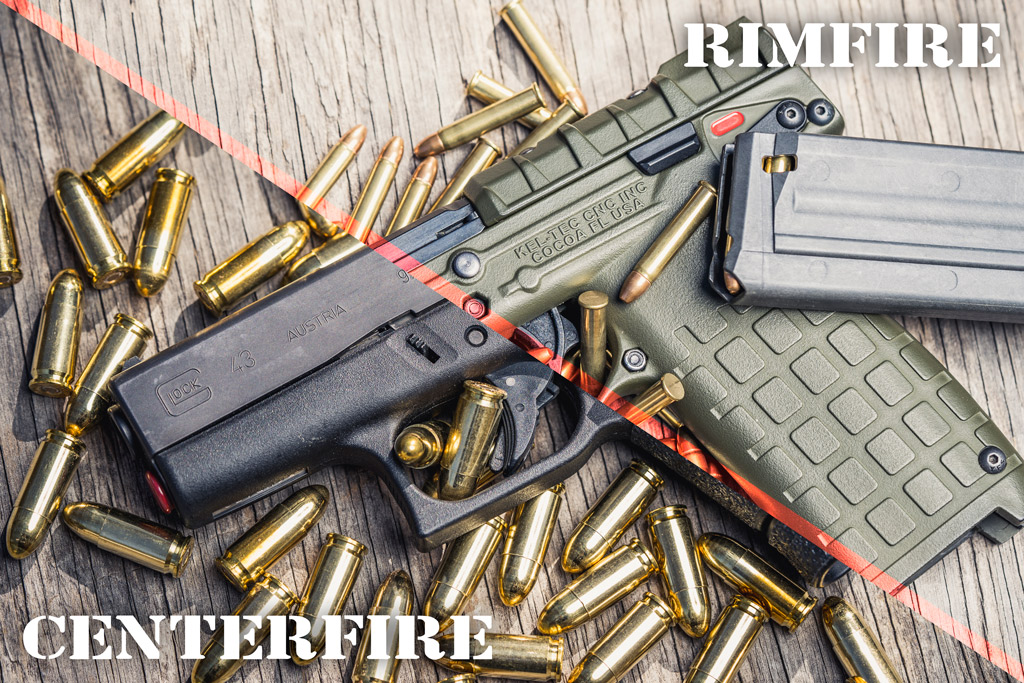 They’re two common primers used by shooters all over the world but do you know what the difference is between centerfire vs. rimfire primers?

There are a lot of ways to categorize ammunition, but one of the most common separating factors is the shape and placement of the primer. That’s where we see the primary difference between centerfire vs. rimfire ammo.

Rimfire and centerfire ammunition have the primers located in different positions. Each serves a different purpose for shooters and in the ammo market, each one has its own niche.

Rimfire cartridges have a primer that rims the base of the shell. A firing pin strikes the rim, crushing a small portion of the case. This ignites the propellant.

Dating back to the 1830’s, the first commonly-used rimfire cartridge was a .22-caliber round. It was manufactured for gallery shooting and general entertainment. It didn’t use powder but instead relied completely on the primer for propulsion. Later versions expanded on this design. It eventually led to the .22 Long Rifle, one of the most popular cartridges on the planet.

Although it was quickly surpassed by centerfire, rimfire cartridges did have moments of fame. Most notable is the .44 Henry Flat, a cartridge shooters used in repeating rifles and revolvers in the late 1800’s. The military even fired it during the Civil War.

Rimfire cartridges require a case that is thin enough to be crushed. That crushing action starts the powder ignition. This creates a simple ignition process (as well as a streamlined manufacturing process) but limits rimfire power.

Because the case needs to be thin to allow for crushing, larger cartridges that require greater internal pressures can’t use the rimfire design. The high pressures would burst the thin case. For this reason, modern rimfire cartridges are, with few exceptions, .22 and .17 caliber. They remain popular for small game hunting, varmint control, and casual high-volume plinking but generally aren’t used for military activities, self-defense or large game hunting.

The most important advantage of rimfire cartridges is their typically cheap price. For people who want a cheap cartridge that can be used for casual weekend plinking, rimfire is a great choice. You can usually pass a full afternoon at the range and spend less than $20 on ammunition. (As of writing this article, there is .22 LR ammo for sale around $.03-$.05 per round.)

Some shooters also appreciate that rimfire cartridges are lighter and quieter than centerfire. This is because of the power restrictions on rimfire. With rimfire rounds, you can shoot multiple rounds without wearing out your shoulder or annoying the neighbors. (It’s believed that you can shoot small rimfire cartridges without ear protection, but many experts recommend ear protection regardless of caliber.)

Disadvantages of Rimfire vs. Centerfire

The most significant disadvantage of rimfire is the low power. You will find rimfire cartridges are small calibers, which means lower internal pressures, slower velocities, and weaker muzzle energies. They are generally not recommended for anything larger than small game, and, while debated, are usually not recommended for self defense.

This may not me a concern for most shooters, but rimfire cartridges are not reloadable. Because the firing pin hits the rim of the cartridge, the brass is crimped and cannot be used for reloading. This is different than centerfire, which has a separate, removable primer that is hit by the firing pin and can be replaced during reloading.

Instead of having a ring of primer at the bottom edge of the cartridges, centerfire ammunition has the primer (you guessed it!) directly in the center. Essentially, centerfire ammo has a small hole in the center of the case head. That’s where you’ll find the a primer, a separate component. The primer is essentially a small metal cup holding the igniting powder that, when impacted by the firing pin, launches the explosion.

Centerfire primers come in two basic types: the Berdan and the Boxer. Hiram Berdan invented Berdan primers. Foreign (non-U.S.) manufacturers use them frequently. In Berdan primers, the anvil feature is part of the main cartridge case. Boxer primers, on the other hand, have the anvil as part of the primer component.

Because the impact point is taken away from the case itself and placed on a separate primer, centerfire ammunition allows or greater pressures without risking the chance of exploding the case. For this reason, you will find that centerfire dominates the cartridge shelf, encompassing everything from handgun ammunition to shotgun shells to long-range rifle loads. It holds a greater range of use than rimfire, and allows for greater velocities and power, giving the chance to throw larger projectiles at a longer distance with more force.

Advantages of Centerfire vs. Rimfire

The main advantage of centerfire is that it comes in larger, more powerful cartridges. With centerfire, which allows for thicker casing, you can build cartridges to withstand a higher pressure, creating loads that are longer, stronger, and faster.

The most powerful rimfire cartridge commonly seen on store shelves is usually the .22 Winchester Magnum Rimfire, which has a muzzle energy that, at the most powerful, reaches over 300 foot pounds. The fastest rimfire is likely the .17 HMR, which can reach over 2,600 feet per second. However, the .30-06 Springfield, a well-balanced centerfire rifle, reaches nearly 3,000 feet per second; it’s not generally considered a “fast” round among the shooting community. The .223 Remington, which is, easily touches 3,000 feet per second for most products and can go above 3,700 fps.

It might not be an advantage enjoyed by many shooters, but you can reload centerfire cartridges. By having a removable primer, centerfire cartridges can be reused multiple times. However, Berndan primers, which have the anvil as part of the main case, can wear down, reducing their usability at a faster pace.

Price depends on many factors(there are centerfire products that can be cheaper than certain rimfire cartridges), but in general centerfire ammunition tends to be more expensive. Quite frankly, you pay more to get more: more case, more propellant, more bullet. All of this adds up to more money.

Although this is a positive for many firearms enthusiasts, centerfire ammunition tends to have a bigger boom. If you are shooting for casual target practice in the country, you are more likely to disturb your neighbors firing a centerfire round. There can also be greater damage to ears, although we recommended that shooters wear ear protection regardless of cartridge size.

Is Greater Variety a Centerfire Advantage?

When comparing the two, you may find it written that “variety” is an advantage of centerfire ammunition. This really isn’t an advantage for gun owners themselves.

Yes, there are far more types of centerfire cartridges. However, just because you own a centerfire firearm does not mean you get to shoot all the different varieties of centerfire products from that weapon.

So there are certainly more centerfire cartridges on the store shelf, but this doesn’t really hold up as an advantage for gun owners.

A Note On Reliability

Because of the construction of rimfire primers, you’ll often see the reliability of these cartridges questioned. Compared to centerfire calibers, many shooters believe you’ll find more failure to fire issues with rimfire ammo.

At the time of this publication, we are aware of no comprehensive testing that backs up this reputation among shooters. Of course, most of us who have been around firearms for a while can certainly tell a tale or two about 22lr ammo jamming up.

So, the anecdotal evidence seems to support the reliability concerns. It may be something you want to keep in mind.

So which is better: rimfire or centerfire? Neither!

Comparing rimfire and centerfire is like comparing spoons and forks. You likely have both spoons and forks in your kitchen, and they each serve a different purpose. The same is true for cartridge type.

If you enjoy affordable high-volume shooting and small game hunting, and appreciate a light kick with a soft sound, then choose a rimfire product. If you want to shoot at greater distances, hunt larger game, and deliver stronger ballistics to the target, then choose a centerfire product.