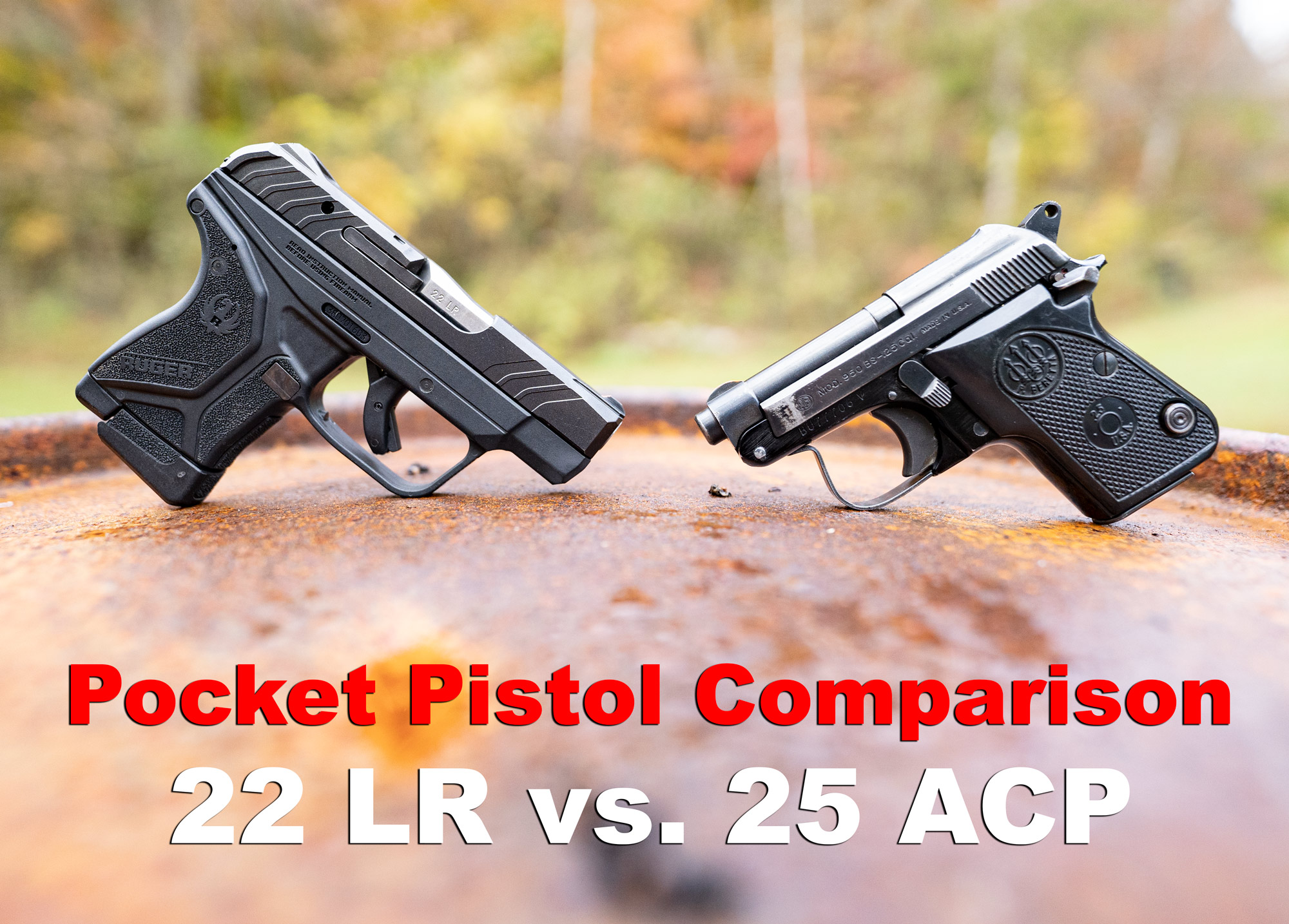 A side by side look at two common pocket pistol calibers, the 22 LR vs 25 ACP. Which is a better bet for you and for self-defense?

It’s the battle of the mouse guns! In one corner we have the slayer of squirrels, the ravager of rabbits, the one, the only, the 22 LR! In the other corner we have the 25 ACP – once the preferred pistol cartridge of James Bond himself! (He converted to the more powerful 380 ACP by the time Dr. No took place.)

These two rounds share one big thing in common: They are absolutely tiny. On the plus side, that means either one will let you carry a puny pistol. On the down side, neither one is capable of doing a lot of damage as compared to something like the 9mm or 38 Special.

We’re going to assume you want to see how 22LR vs 25 ACP compare as far as self-defense is concerned, because anyone who’d use the 25 ACP for hunting needs a thorough head examination. Let’s compare the cartridges’ ballistic performance, stopping power, recoil, and price and availability so you can determine which one belongs in your purse, pocket or ankle holster!

These aren’t totally dissimilar cartridges as far as their exterior dimensions are concerned. The 22 LR is a little longer; the 25 ACP is a little wider in diameter (which means its bullet is poised to create an accordingly wider wound channel, terminal expansion notwithstanding). Both are loaded to roughly the same chamber pressure. In short, these two rounds are perfectly sized for the kinds of tiny pistols you’d want as a backup or for when you want to make absolutely sure no one knows you’re carrying.

Although the 22 LR and 25 ACP haven’t got identical dimensions, they can have the same bullet weight. Manufacturers commonly load 22 LR ammo with a 40 grain bullet, while the 25 ACP’s standard is 50 grains. Despite this, 45 grain loads are both available.

These rounds have different types of primers. The 22 LR’s rimfire primer is entirely concealed by cartridge brass; this primer design limits how powerful a cartridge can become, and furthermore makes handloading impractical. The 25 ACP’s Boxer primer is the same that the largest rifle cartridges in the world use – only smaller. Its Boxer primer makes it possible to reload the 25 ACP, but its shell case is so small that you’d need the brains of an adult and the hands of a three-year-old to do it.

Comparing these two rounds’ ballistic performance based on their available data is tricky. That’s because 22 LR ammo muzzle velocities are almost exclusively recorded with rifles, which have longer barrels that give bullets significantly higher muzzle velocities. Fortunately the Federal Punch and Winchester Silvertip rounds are both designed and marketed for use in pistols, and we already had CCI Stinger pistol data handy.

Let’s be clear, here: You wouldn’t want to use either of these cartridges for self-defense at 100 yards. (You’re not likely to engage a threat that far with a pistol anyway, unless you’re serving in the Armed Forces and you can’t use your rifle.) And at close-range, either one delivers the accuracy you’d need to reliably hit your target (with some practice, of course).

With that, we can safely conclude that the 22 LR delivers a flatter trajectory. It has the faster muzzle velocity, as well as the higher ballistic coefficient (a measure of a bullet’s ability to overcome air resistance in flight, where a higher number is superior). In other words, the 22 LR’s bullet doesn’t drop as quickly as 25 ACP ammo, thus making it easier to aim over longer distances. But more importantly, the 22 LR’s faster bullet does more damage!

Stopping power is the product of many factors. Terminal expansion is one of them, but in the case of the 22 LR and the 25 ACP you’re not likely to see much of that, which we’ll demonstrate in a moment. Their bullets lack the velocity and momentum they’d need to expand very reliably. The Federal Punch round is actually engineered around that fact, as the self-defense round’s nickel-plated flat nose bullet is designed solely for penetration and not expansion.

You might expect the rimfire round, which cannot be very powerful by design, to deliver less energy to its target on impact than the Boxer-primed round. To do so would be to underestimate the amazing impotence of the 25 ACP! The 22 LR is often capable of hitting its target harder at 100 yards than the 25 ACP is capable of right out of the muzzle. 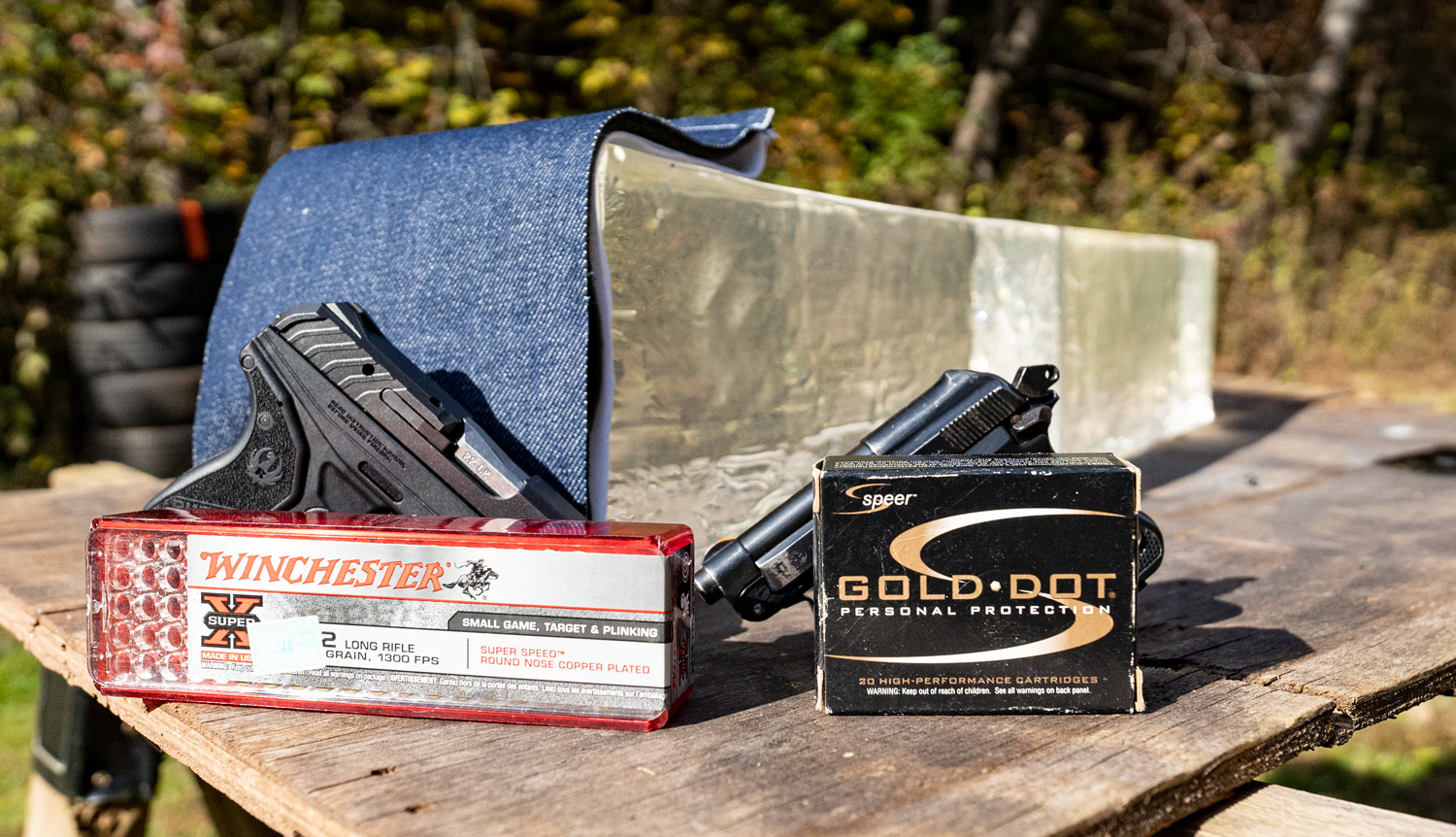 To demonstrate the relatively weak stopping power each of these calibers deliver, we fired rounds into a block of Clear Ballistics gelatin with a 4-layer cloth barrier. This style of testing is similar to what the Federal Bureau of Investigation does to see the effectiveness of ammo for its officers.

First, we fired the 22LR into the gelatin using a Ruger LCP II.

As you probably expected, there wasn’t a ton of expansion going on. We fired the Winchester Super-X 22LR ammo into the block and it penetrated about 9-inches. The bullet itself tumbled slightly but didn’t really expand.

To compare against the 25 ACP, we then fired some Speer Gold Dots with a Beretta 950 BS. 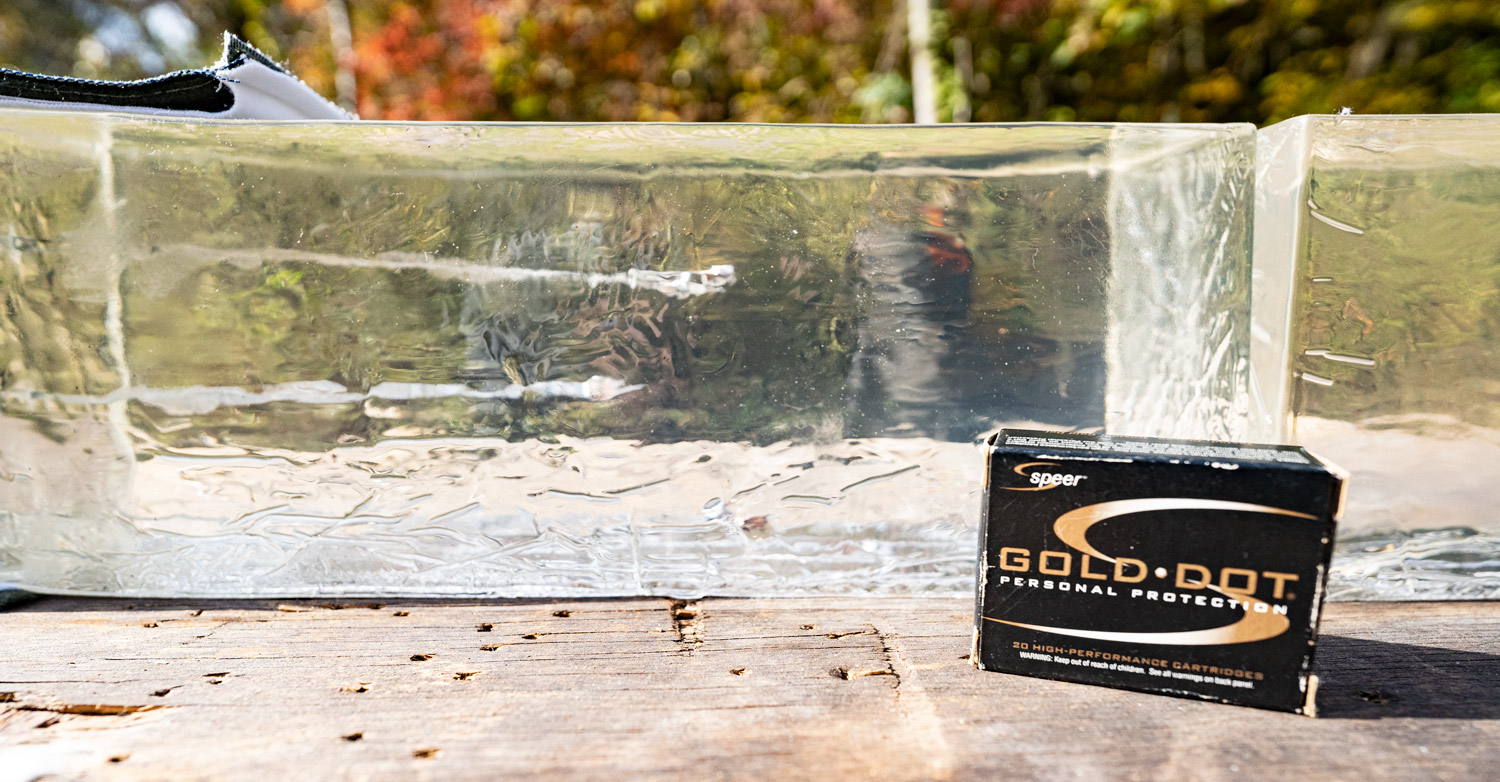 You can see our Speer Gold Dots expanded a touch more than the 22LR but penetration was even weaker. The 25 ACP ammo only made its way to a penetration of about 8-inches. That’s less than what the FBI considers its minimum distance. Of course, the 22 LR didn’t exactly penetrate like a freight train either. So, if you want your ammo to live up to what the FBI considers “good” – neither of these are great options.

Because of the relatively weak terminal ballistics displayed above, good aim is positively crucial when you’re firing either of these rounds. You NEED a clean shot to the vitals or the head to neutralize a threat as quickly as possible when you’re talking about so small a bullet that carries less than 100 ft lbs of energy. But if the 22 LR can hit almost 50% harder than the 25 ACP, preferring it for personal protection is pretty much a no brainer.

Recoil is often called “kick.” The less recoil a cartridge generates, the easier it becomes for the shooter to keep their sights trained on the threat. You don’t want to spend any more time lining up your follow-up shots than you have to when someone means to do you immediate bodily harm, right?

Lets compare the objective recoil energy of the six rounds listed above. To do this we only have to factor in muzzle velocity, bullet weight, propellant weight and firearm weight. For simplicity’s sake let’s assume all cartridges have two grains of powder and we’re firing 10 ounce handguns.

As you might have guessed, both cartridges generate tiny amounts of recoil energy – just over 1 ft lb, which is negligible. There’s no reason to prefer one round over the other as far as recoil is concerned.

Note that next to their small handguns, low recoil is the primary advantage of these small cartridges. They may not be powerful (which is an understatement), but they make it substantially easier to fire a handgun quickly and accurately. While nearly all men can control a 9mm without issue, smaller women may really prefer a round that delivers next to zero quick. If a lady can put 10 rounds of 22 LR inside a threat’s chest and head in a matter of seconds, its low power kind of becomes a moot point!

Subcompact pistols chambered for 22 LR and 25 ACP are both cheap as chips. Such small cartridges aren’t all that expensive, either.

But whereas the 22 LR is the most popular cartridge in the world, and therefore easy to find online or at a gun shop even if you have your eyes closed, the 25 ACP is more of a rarity. You’ll have to go out of your way to get some, and you might have more luck searching for leprechauns during an national crisis.

This is one of the easiest takeaways we’ve ever written: If you want to carry a subcompact pistol and are deciding between 22 LR and 25 ACP, pick 22 LR. Both rounds are accurate enough to cover short distances without fail, and both produce negligible recoil even when fired from small handguns. But a 22 LR handgun is so much more powerful and so much easier to find ammo for that the 25 ACP just doesn’t compete. So, if we have to pick a “winner” in the 22LR vs 25 ACP debate, we’re going with 22 long rifle, based mostly on ammo availability.