An in-depth look at the Speer Gold Dot line of ammunition. What makes it unique and why do self-defense shooters favor it?

Speer’s Gold Dot line of ammunition is one of the highest quality solutions for self-defense out there today. More than 3,000 law enforcement agencies throughout the United States issue Speer Gold Dot ammo for their officers’ duty weapons. Those agencies include the New York Police Department, the California Highway Patrol, and the Pennsylvania State Police.

We believe private citizens are just as entitled to go home safely every day as police officers. That’s why Gold Dots make a great choice for your carry weapon, even if you don’t wear a badge in your line of work.

Looking to buy Gold Dots for your pistol?
Click here to see our in-stock line-up of Gold Dot self-defense ammo.

A failure to feed or fire at the range is an inconvenience at best. In a self-defense scenario, a failure like that can prove life-threatening. That’s why Gold Dot ammunition complements its precision engineered JHP bullet with high quality supporting components.

Speer ammo comes from the CCI ownership group. You’ve probably heard of that company. CCI is another American brand name that helped to revolutionize the ammunition industry as they developed more reliable pistol primers. Every Gold Dot cartridge features CCI’s own sensitive and non-corrosive primer. That’s paired with a carefully measured charge of clean-burning propellant. Together a Gold Dot round’s primer and propellant deliver consistent recoil and ballistic performance with every shot.

Is Gold Dot Good for Self-Defense?

The Gold Dot bullet has three defining features that enhance its performance for self-defense: an alloyed lead core, a bonded jacket, and a specially formed hollow point nose cavity.

Why Is It Good for Self-Defense?

Speer designed the Gold Dot bullet to excel at the FBI test protocol for ammunition. The protocol involves a series of tests which determine how effectively a bullet can penetrate and expand within ballistic gelatin (which simulates the density of swine flesh) after having passed through a number of barriers. They fire all shots at a distance of 10 feet.

A bullet that always penetrates to the same depth between 14 and 16 inches, retains 100 percent of its weight, and expands to greater than a certain diameter depending on its caliber (0.625 inches in the case of 9mm) will receive a perfect score on the FBI test protocol and thus be deemed most suitable for self-defense by law enforcement professionals.

Does Law Enforcement Use It?

A ton of police departments all over the country use Gold Dots. To give you a sense of Gold Dot ammo’s performance on the FBI test protocol, let us review the results of Speer’s own data for their 9mm 124 grain Gold Dot cartridge (That’s SKU 53618 if you’re one that likes to keep tabs on it).

We won’t go into the complicated math that is used to arrive at a perfect score of 500. We also wouldn’t suggest that any bullet could receive a perfect score.

However, what we can conclude is that the Gold Dot bullet consistently retains virtually 100 percent of its weight. (with the exception of after having penetrated safety glass, which is the barrier bullets have the most difficulty overcoming) It also expands to an average width of 0.5675 inches (which would earn it a 7 out of 10 according to the protocol). Ammo that penetrates fewer than 12 inches or deeper than 18 inches is heavily penalized. In spite of coming short of ideal, the Gold Dot bullet still consistently proves highly effective for self-defense. Cops wouldn’t favor it so heavily otherwise. 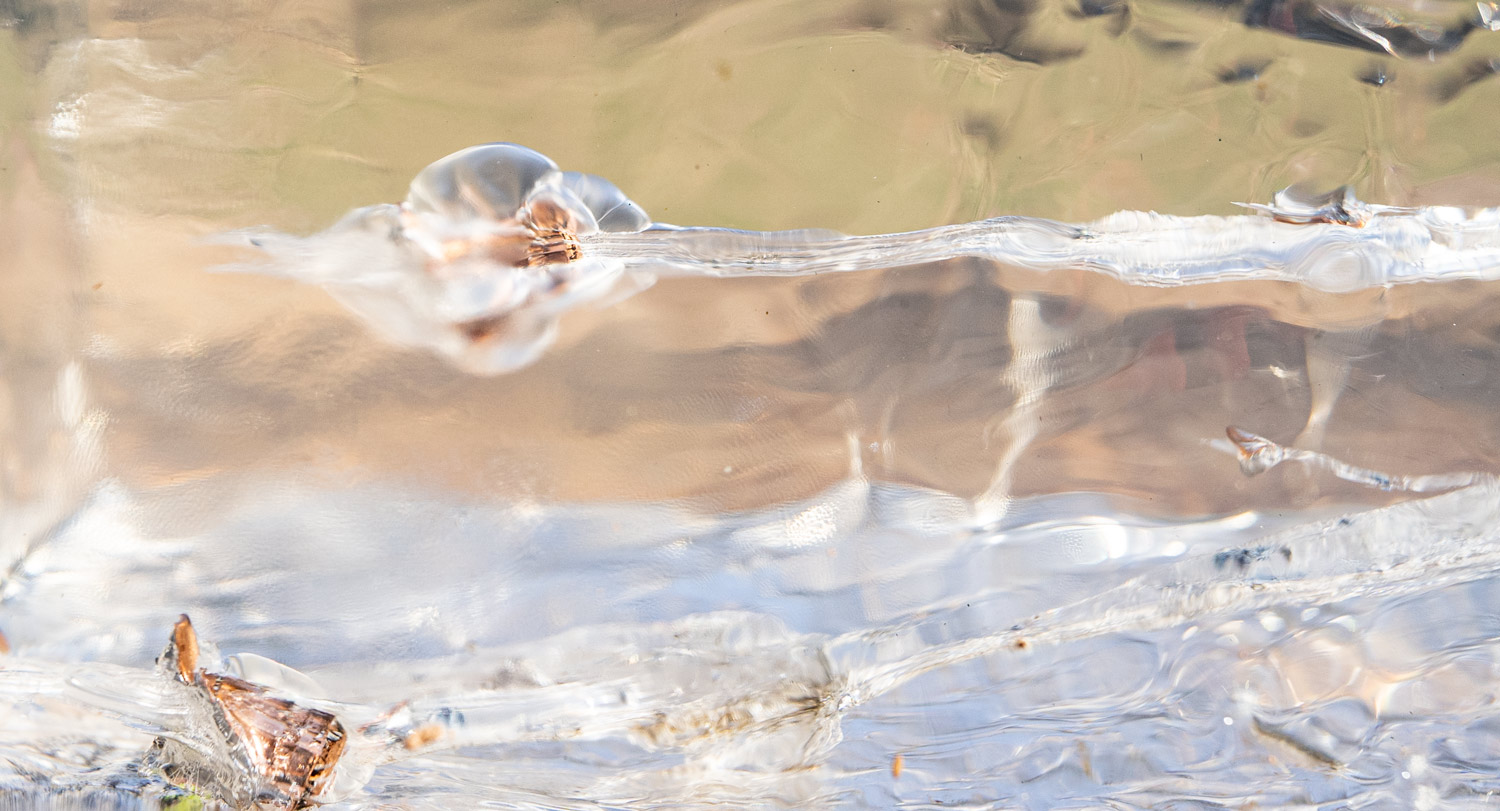 We simulated a testing protocol similar to the FBI’s tests at our range. Firing the Gold Dot 9mm ammo with a 4-inch barrel and through a 4-layer cloth barrier, we found impressive penetration of about 15″ with our three shot grouping. You can see several of the Speer Gold Dot loads put through this protocol as part of our best self-defense ammo project here.

Gold Dot Personal Protection and Gold Dot LE are identical. The only difference is the packaging. Personal Protection cartridges commonly come in boxes of 20; LE cartridges usually come in boxes of 50. (Police often train with the same ammo they carry on duty and therefore need Gold Dot in bulk quantities. Though many opt to train with the Speer Lawman line of ammunition since it’s generally cheaper.)

What About Gold Dot G2 Ammunition? 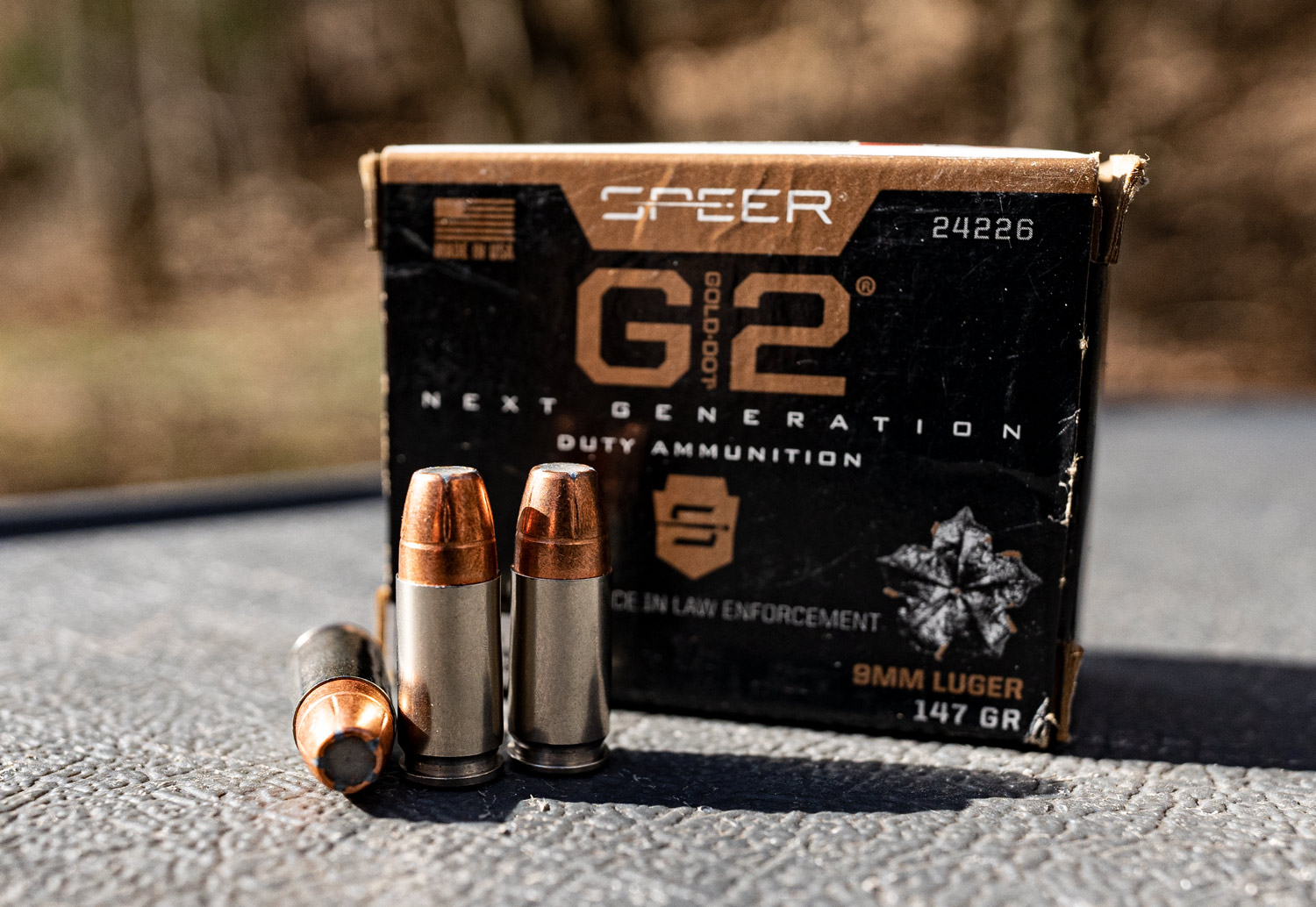 The Gold Dot G2 bullet looks dramatically different from its predecessor. Instead of a conventional diameter nose cavity, the G2 bullet has a narrow, shallow nose cavity that Speer fills with elastomer. That supple polymer material forces its way into the G2 bullet core’s internal fissures when it makes contact with a soft target. This forces the bullet to expand, which helps yield reliable terminal expansion.

Because it lacks a traditional nose cavity, the G2 bullet offers more reliable feeding in a semi-automatic firearm as well. The elastomer keeps the hollow point resists clogging with debris as it penetrates barriers such as heavy clothing and plywood.

Is Gold Dot Made in America?

Vernon Speer founded the company in Lewiston, Idaho in 1943. Vista Outdoor bought the company years later, but Speer still manufactures all of their ammunition in the small city where Vernon Speer first set up shop.

AmmunitionToGo.com carries a full line-up of Speer Gold Dot ammo for sale to American shooters. You can see what we have in-stock by clicking the image below.