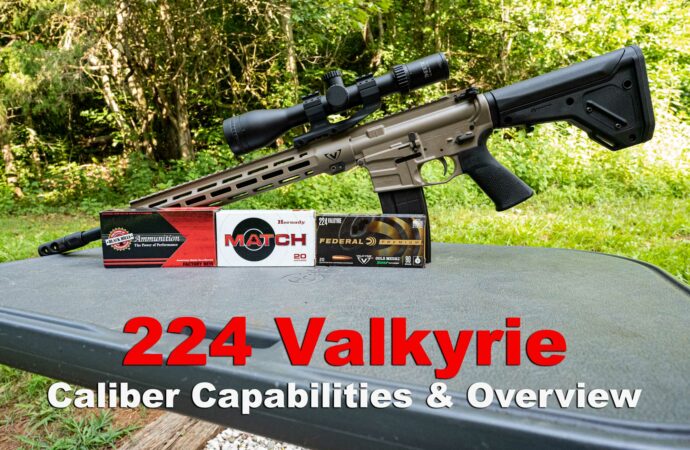 An in-depth look at the relatively young 224 Valkyrie caliber. This caliber guide should give you a good feel for the cartridge's capability and if it's a good fit for what you need in a rifle.

Have you ever fired the .224 Valkyrie? If not, don’t feel bad; this cartridge is an extremely new product (recent, at least, in the ammunition industry, which has products well over a century old), and many hunters and target shooters have yet to adopt this round.

Federal designed the .224 Valkyrie to be a fast-moving cartridge that maintains decent speed and straight trajectories at a distance of 1,000 feet. While many shooters may never even attempt a shot at that range, others will find this distance not only enjoyable, but highly effective.

So should you add a .224 Valkyrie rifle to your gun safe?

History of the .224 Valkyrie

Although a highly effective round for hunting, the history of this cartridge is rooted in competition shooting. Before its release, large platform cartridges like .308 Winchester and 6.5 Creedmoor dominated long-distance competition. These cartridges were useful, but there was a growing demand for a small-platform round that could still be accurate and effective at 1,000 yards or more. 223 Remington ammunition, while extremely popular, simply did not reach these distances with consistency.

To meet this need, Federal Ammunition, one of the most successful ammo companies in the world, took their 6.5 SPC cartridge to start. Then, they slimmed down the neck so it would hold a smaller bullet. In essence, the .224 Valkyrie uses the same amount of propellant (give or take) as 6.5 SPC and uses it to launch a lighter bullet. The result is a fast-moving, long-flying round that can, with relative accuracy and sustained energy, strike a target at 1,000 feet or more.

Some cartridges still in use today, as we have noted, have over a century of history behind them. But the .224 Valkyrie, released in 2017, has very little. For this reason, some hunters and shooting enthusiasts are hesitant to adopt the round. Instead, they’re waiting to see if it gains popularity; if it doesn’t, owners will be stuck with a rifle for which ammunition is rare and expensive. But it seems that with such deadly accuracy and long-distance power, this round will be used for a variety of purposes. And the more versatile a round, the more uses it will find. In essence, the .224 Valkyrie seems like it will stick.

Performance of the .224 Valkyrie

Your performance with .224 Valk depends heavily on the specific product you fire as well as the rifle which you are using. However, when you look at the statistics for the .224 Valkyrie, you see that this is a fast, energetic round. It delivers a straight trajectory with most commercially loaded ammo and factory built rifles.

With muzzle speeds as high as 3,300 fps (feet-per-second) among the products we looked at, this cartridge comes out of the barrel with a fast velocity. With a Savage MSR 15 rifle equipped with a 18″ 1:7 twist rate barrel, we saw muzzle velocities that fell right in-line with expectations. For instance, firing the 90 grain Sierra MatchKing from Federal, we consistently fired at 2600+ fps from the rifle. With the lighter 60 grain VarmintMax 224 Valkyrie ammo from Hornady, were in the vicinity of 3100 feet per second.

But it’s the long-distance speed, for which is maintains velocities over 1,500 fps, that sets this round apart. This downrange speed, which translates into straighter trajectories and more impact energy, is due in large part to the bullet’s excellent ballistic coefficient.

The energy delivered by this cartridge is also impressive, but it’s (once again) the energy downrange that impress most shooters. As you can see from the statistics above, most .224 Valkyrie products will deliver the downrange energy needed for varmint control and medium-range hunting.

Once again, we see fairly strong downrange statistics for this cartridge. With minimal drop, skilled shooters have the capability to fire it and strike targets or game animals with superior accuracy.

Gun owners of all types will likely find that the .224 Valkyrie is useful for a variety of different purposes. One of those purposes is target shooting, and since this cartridge basically came out of that realm, that’s where will start.

Shooters who enjoy target shooting, especially competition shooting, will be pleased with the .224 Valkyrie. It’s gaining a reputation as one of the most straight-shooting rounds in the market. Thanks to it’s adoption in modern sporting rifles (“AR-style”rifles), you can also fire it at rapid paces. Ifg you’re like me, this means more fun at the range and a better chance of success in a competition.

For many gun owners, quite frankly, finding a range where you can use the .224 Valkyrie to its highest potential will be the biggest challenge. For some of us, finding ranges of 1,000 or 1,500 feet is tough.

The other common use for the .224 Valkyrie is hunting, especially long-distance hunting. This cartridge, as we have noted, delivers excellent power and accuracy at over 1,000 yards. While skillful, practiced shooting is always required, hunters can have more confidence in their shots and take longer aim at game animals. The same goes for landowners who want to maintain a varmint or pest population. You can achiever coyote control, for example, at a longer distance with this round.

Ammo for All Your Shooting Activities

Whether you need rounds for hunting, target shooting, or personal protection, you’ll find everything you need right here. Visit our site and let us help you find the right ammo for you next trip to the range or adventure in the woods!

How to Clean a Remington 870