A look at the legendary weaver stance for shooters. Why did this stance get so popular and is it something you should consider adding to your toolbox to become a better shooter? Let’s find out!

We all know that shooters are some of the most opinionated people on the face of the planet.  Not a day goes by that there isn’t some heated internet debate about the best pistol, shotgun, self-defense ammo, hunting cartridge, or rifle scope.

I’ve even seen tense arguments between gun people about which baseball team is the best (I stand by the Atlanta Braves).

One of the most debated topics among firearms enthusiasts is pistol shooting stance. Every shooter seems to think his way is the best way. Some swear by a Weaver stance. Others dismiss it as impractical and outdated.

Listen to enough YouTube commandos and gun range gossipers rant about shooting stance and you’ll end feeling as lost as last year’s Easter egg. We’ve decided to cut through the myths and opinions regarding this popular shooting stance. We’re going to focus on the facts and then let you decide for yourself.

A Brief History of the Weaver Stance

These Leather Slap matches were organized by Lt. Col. Jeff Cooper and involved head-to-head quick draw shooting. Competitors raced to see who could pop twelve balloons 21 feet away. The first shooter to pop all twelve balloons won the match.

Most competitors adopted some form of unsighted hip shooting. However, Deputy Weaver developed his own quick draw method that raised his pistol to eye level, where he could use the weapon’s sights. As a result, Weaver ruled these competitions with superior accuracy.

The competition organizer, Jeff Cooper, was also a firearms instructor and a gun writer. He dubbed this innovative stance the “Weaver stance” in honor of its creator. Cooper unapologetically promoted the new stance in articles he wrote for a new up-and-coming magazine called Guns & Ammo. Cooper also extolled the virtues of the Weaver stance in several of his books and at his American Pistol Institute (currently known as the Gunsite Academy).

What is the Weaver Stance? 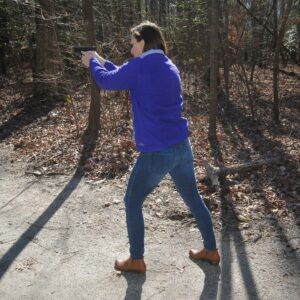 There are two main components of the classic Weaver stance. The first is the position of the feet, which largely resembles a traditional boxing stance. The foot on the shooter’s non-dominant side (or the non-shooting side) is positioned slightly forward of the other foot with the toes pointing toward the target. The shooting side foot is positioned slightly behind the forward foot. The toes of the rear foot may point toward the target or angle out slightly (although the angle should not be more than 45 degrees). Although one foot sets slightly in front of the other, they should be spaced about shoulder width apart.

The forward knee should be bent slightly, allowing the front leg to support slightly more weight than the rear. This position allows the shooter’s upper body to lean forward slightly at the hips, with the shoulders moving toward the forward knee until the nose is almost over the toes.

The rear knee takes a straighter position, but should not be locked. The shooter should maintain some flex in the rear knee for balance and mobility.

The shooting side arm is only slightly bent at the elbow, while the support side is noticeably bent with the elbow pointing toward the ground. This position allows the shooter to use “push-pull” isometric tension. In essence, the shooting arm pushes forward while the support arm pulls back simultaneously. This helps provide a stable aiming platform and helps control muzzle rise.

The Weaver as a Fighting Stance

From the classic Weaver stance, you can shoot, throw a punch or kick, move out of the way, or stand your ground. It is truly more than a shooting stance. Warriors have been using a similar stance for centuries, and it works effectively for multiple weapon systems (I use a variation of this stance when I shoot a bow or rifle) and all body types.

With the shooting side foot dropped back slightly, the stance provides solid four-way stability. Should you get bumped from the back or side, the Weaver stance provides stability and helps you stay on your feet (a valuable asset should you find yourself in a self-defense situation).

The foot position also allows for easier four-directional movement. Since self-defense situations are typically dynamic, shooters rarely stand in one spot. Instead, practical self-defense requires shooting and movement combined, and the Weaver stance naturally sets the shooter up to move and shoot rather than shooting from a stationary position.

Another combat advantage to the Weaver stance is that it naturally lowers your profile. By simply stepping one foot back, the torso angles slightly, providing a smaller target for anyone who might be shooting at you.

The Weaver Stance and Recoil Control

When done properly, the Weaver imposes a “push-pull” on the handgun. As the shooting arm pushes against the gun, the support hand pulls it back toward the shooter’s body. This isometric tension provides a stable platform for aiming and helps you get your sights back on target quickly.

However, with both elbows slightly bent, much of the recoil is taken up by the wrists, especially when shooting in a close-quarters situation. This can be problematic when shooting a larger caliber handgun. It can also pose problems for shooters with weaker wrists (I’m talking about us, ladies).

The Weaver stance relies on arm muscles rather than the body’s bone structure to absorb the weapon’s recoil. This may be why this stance tends to be more popular with men. While there are plenty of women who have no problem with it (I actually love it), it can be difficult for some, especially ladies with a smaller build.

Disadvantages of the Weaver Stance

Although the Weaver stance has plenty of advantages, it is by no means perfect. First, the stance tends to fall apart during moments of extreme stress. During an adrenaline dump, as muscles weaken and coordination becomes sloppy, the shooter’s strong arm often overpowers the weaker side. This can cause bullets to hit high and slightly toward the shooter’s support side (That would be high and left for you right-handed shooters).

Shooters with cross-dominant vision (for example, those who are right-handed but left eye dominant) will have more difficulty using the Weaver stance. Because the shooting hand is mostly straight, the stance naturally aligns the dominant hand with the same-side eye. If this isn’t your dominant eye, you feel like you need to lean your head awkwardly to obtain a proper sight picture.

Many critics of the Weaver stance, especially those in law enforcement, claim it angles the upper body too sharply. This angle could potentially expose the gap in an officer’s body armor. As any deer hunter knows, the best place to shoot a deer is directly behind the shoulder. Human anatomy is not all that different from deer anatomy. A bullet through that body armor gap would punch laterally through multiple vital organs and cause a catastrophic wound.

However, Gunsite instructors point out that the torso should be at only a slight angle, which would minimize the exposure of the body armor gap to a head-on threat.

Some women also claim the elbow position of the classic Weaver stance feels awkward and uncomfortable. When done properly, the elbows of both the shooting and support arms should be pointed downward.  The proper elbow position can be almost impossible for some women to achieve without flaring their elbows, especially for women who are well-endowed (Sorry, ladies. The struggle is real.)

However, busty women aren’t the only ones who find the elbow position problematic. Some barrel chested men also have a hard time keeping their elbows from looking like chicken wings in this stance.

Although the Weaver stance has some major benefits, it may not be the best choice for every shooter. Here are the pros and cons of the classic Weaver stance in a nutshell. 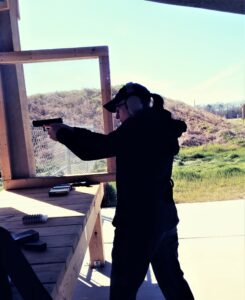 The Pros of the Weaver Stance

The Cons of the Weaver Stance

Thankfully, there is no one-size-fits-all formula for shooting. If the Weaver stance doesn’t work well for you or your shooting application, there are plenty of others to choose from. However, once you’ve settled on a stance, the best thing you can do is practice. Muscle memory is a valuable tool, especially when shooting in a high-stress situation. So drill that stance until it becomes second nature.