A quick how-to on shooting the Mozambique Drill. This is a great exercise to work on speed, accuracy and self-defense tactics.

“Two to the body, one to the head, is guaranteed to leave them dead.”

This little rhyme, refers to the Mozambique Drill. While catchy mottoes are easy to remember, the technique itself can be difficult to master. It takes focus, determination, and plenty of practice to pull off the Mozambique Drill quickly and effectively.

Although two shots to the vitals of an attacker will stop a threat cold in most situations, it doesn’t work 100 percent of the time. That’s why practicing the Mozambique Drill is so important. It’s a handy tool to have in your defensive tool box just in case shots to center mass don’t accomplish what they are supposed to do.

What Inspired the Mozambique Drill

Two to the Chest, One to the Head

Although the legendary Col. Jeff Cooper is credited with developing the Mozambique Drill, he had a little help. The drill was inspired by an incident encountered by Rhodesian mercenary Mike Rousseau during the Mozambican War of Independence (1964 to about 1974).

Engaged in a firefight at an airport in Lourenco Marques, Rousseau encountered a guerilla fighter armed with an AK-47. Relying on instinct and training, Rousseau delivered a double tap to the combatant’s chest with his Browning Hi Power pistol and 9mm ammunition. Rousseau then lowered his weapon to the ready position. However, the guerilla soldier kept coming, with two bleeding wounds to the torso, and still armed with his rifle.

After a quick assessment of the situation, Rousseau tried for a shot to the man’s central nervous system. Although he aimed for the fighter’s ocular cavity, the adrenaline coursing through Rousseau’s body caused him to miss. Thankfully, the shot hit the attacker’s throat, severing his spinal cord and eliminating the threat.

Upon hearing the story of Rousseau’s encounter, Cooper incorporated a three-shot drill into his training at the famous Gunsite Academy. He named it after the country where the incident occurred, dubbing his drill “the Mozambique Drill.”

The drill is also sometimes called the “Failure Drill,” as the third and final shot is made in response to a situation when the double tap fails to stop an advancing threat.

Modern zombie culture has also appropriated the Mozambique Drill. Don’t be surprised to hear the drill referred to as the “Zombie Drill” or “Zombie Check”. Apparently, the only way to stop a zombie is with a well-placed head shot.

Why The Mozambique Drill is Necessary

The concept of the Mozambique Drill is to ensure a threat is stopped even if the initial center mass shots fail to get the job done. If the target continues to advance despite two well-placed shots to the torso, the shooter follows up with a more precisely aimed (and more difficult to accomplish) head shot. An accurate shot to the T-zone (the area between the eyebrows and upper lip, also called the ocular cavity) damages the brain and central nervous system and secures instant incapacitation of the target.

This is an effective way to stop a threat that isn’t immediately stopped by two shots to the body’s center mass. Hitting the T-zone is a challenge. Heads bob around erratically and the effective zone is relatively small. Miss the zone, and the projectile could deflect off the bony areas of the skull without eliminating the threat. 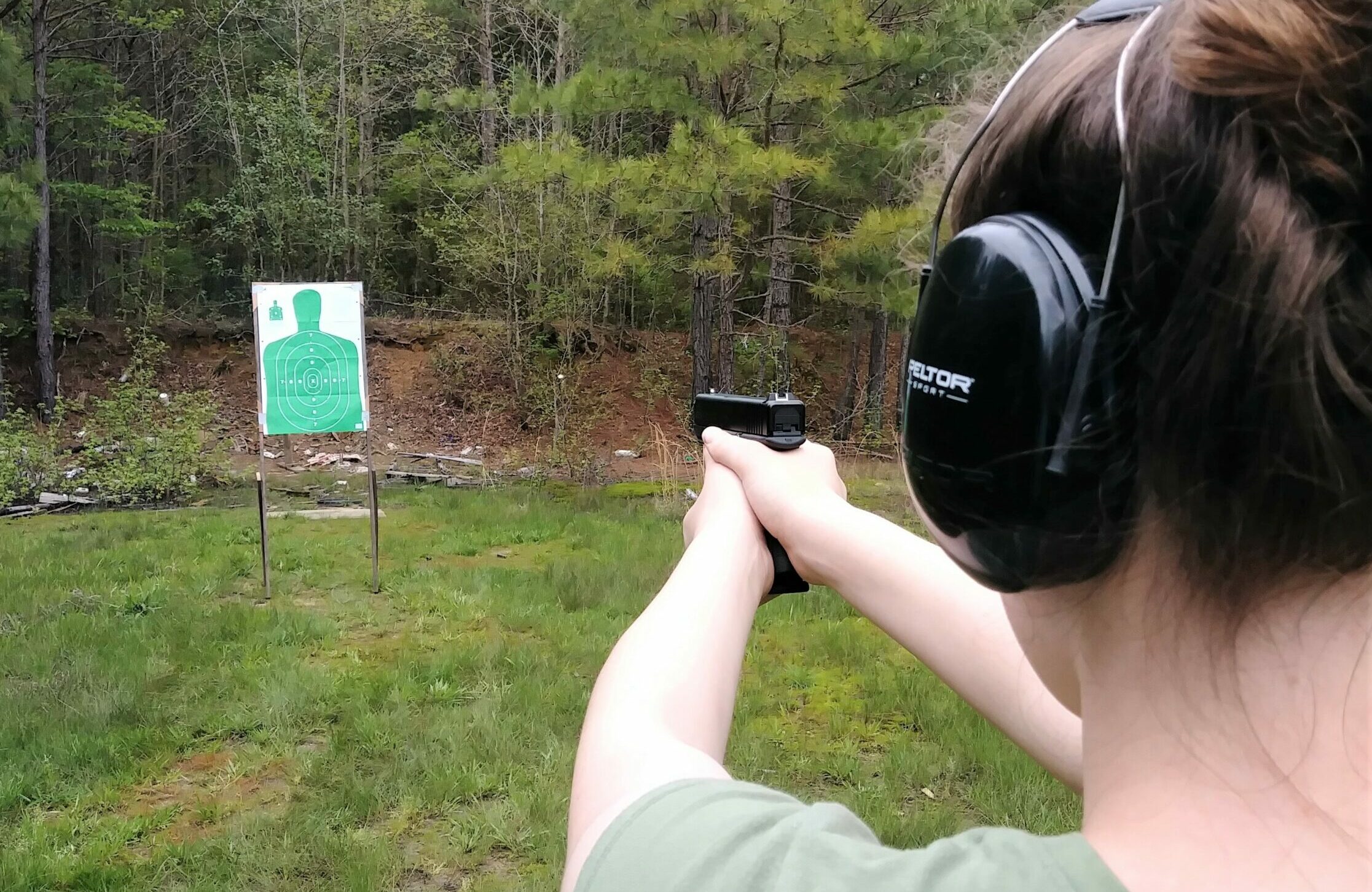 Although in most situations, the two perfectly placed shots to the chest should disable an attacker, there are several reasons they could fail. Body armor, extra thick clothing, psychoactive drugs, or even a massive adrenaline dump are all reasons those first two shots may not be effective on your target.

However, since you won’t have time to interview your attacker in the heat of the moment, the specific cause of the failure isn’t important. No matter the reason, the third shot should stop the attacker in his tracks.

So why not just send the first shot to the head?

The bottom line: Accurate head shots are hard. Center mass is easier to hit quickly, and in most cases will effectively stop a threat. Shots to the chest can also slow an attacker’s advance, even if they don’t completely incapacitate him. Therefore, the more difficult head shot should be used as a follow up to your double tap.

How to do The Mozambique Drill

At the start signal, draw your weapon and fire two shots to the chest (V1 zone), followed by one shot to the head (V2 zone). The Mozambique drill is performed for both accuracy and time. If any of your three shots miss, you have failed the drill. The shots should be fired as fast as you are able, however they shouldn’t be so fast that you miss your intended target.

Your goal should be three accurate shots in under four seconds. It’s much harder than you may think. If you can successfully perform the drill in under five seconds, you’re doing better than most law enforcement officers.

Under three seconds, and you’ve got some major skills. 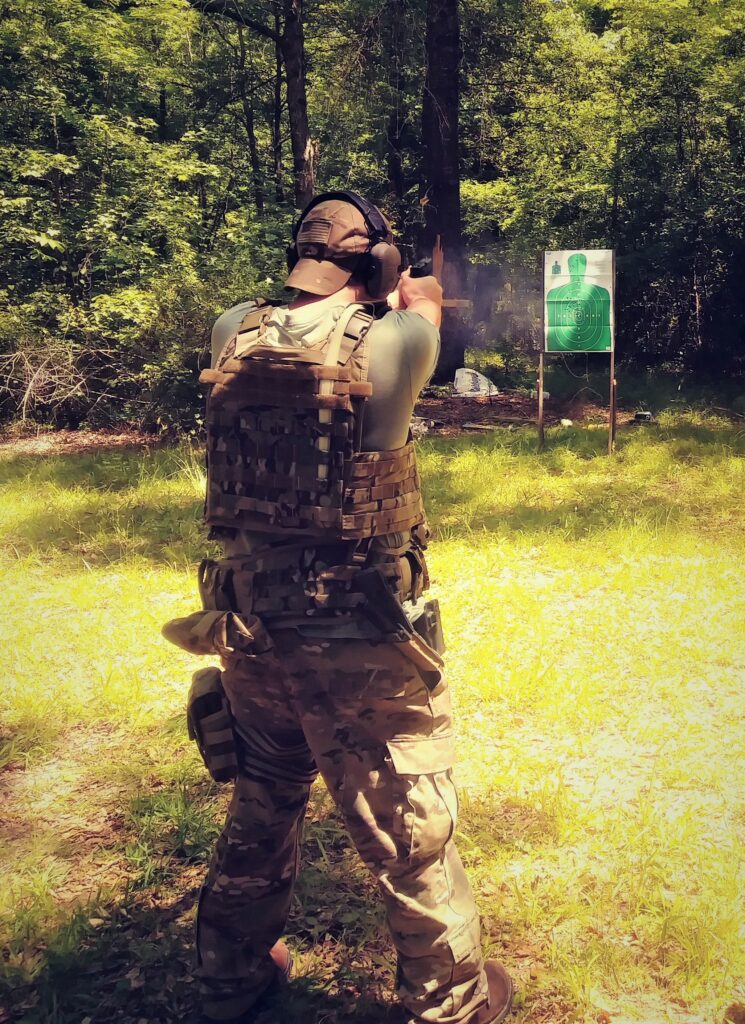 Practical Variations to the Mozambique Drill

Remember, the Mozambique drill is designed for a defensive situation where the first two shots failed to stop an attacker.

One of the earliest versions of this three-shot drill required law enforcement officers to fire two shots at center mass, then lower their weapon to the ready position while assessing the need for the third head shot. However, in a dynamic situation, the fraction of a second it takes to assess the threat could put your life in danger.

Today, most instructors teach their students to hold the pistol on target after the first two shots. Then, they can make a smooth transition to the third V2 shot if it is necessary.

If you’re looking for some variety in your training, one practical application of the drill is to fire the first two shots to the target’s center mass (V1), then take two steps back to create distance before the third shot.

You can also take two steps to the side to get offline of the attack before making the final head shot. Even better (although much more difficult), make the final shot as you’re moving offline.

These two additions to the drill could make a world of difference in a real-life self-defense situation. However, this drill is mostly concerned with improving your shooting skills rather than learning the nuances of self-defense tactics. Proper tactics can vary greatly depending on the circumstances and situation.

Although speed is definitely one of the goals of the Mozambique Drill, it isn’t nearly as important as accuracy. It doesn’t matter how fast you can pull off rounds if they don’t hit your target.

Transitioning between targets can take some getting used to, especially for shooters still trying to get some experience under their belts. If you start slinging your lead outside of the V1 or V2 zones, slow it down. Once you can achieve repeatable accuracy, then you can start to speed things up.

IDPA 5×5 Classifier Drill – How It Works