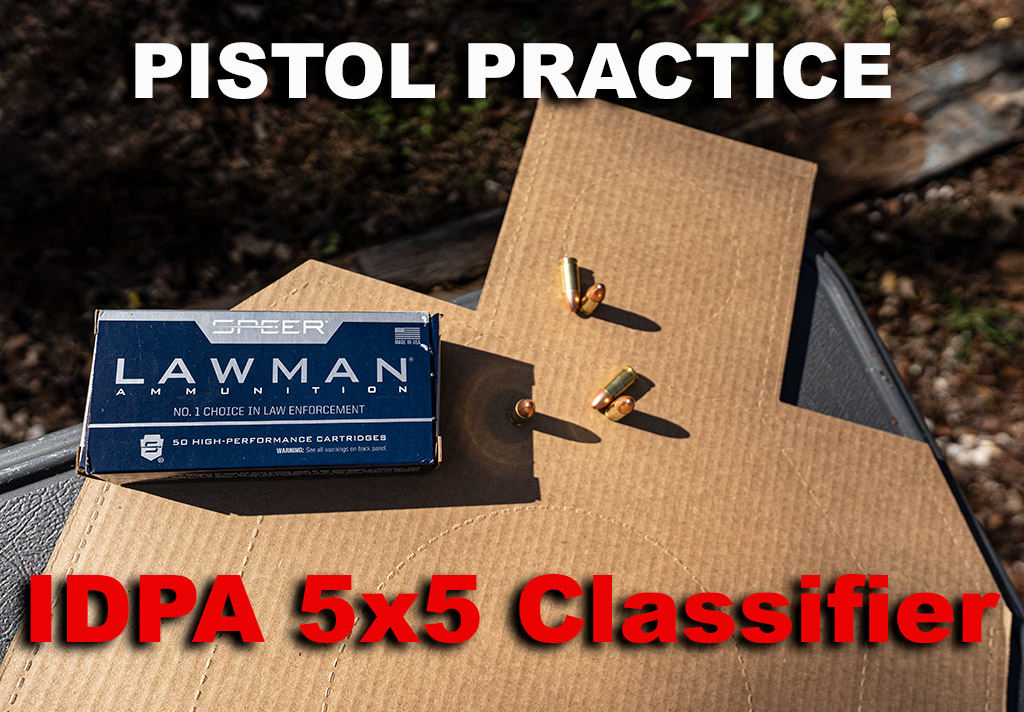 A look at the popular IDPA 5×5 Classifier shooting drill along with some tips and the reasons this drill is helpful for shooters looking to practice for self-defense situations.

There are a dozen (or more) drills out there to help you both build and assess your shooting skills. The IDPA 5×5 Classifier Drill is one among many, but it doesn’t get much easier (or more effective) than this. All you need is a target, a timer, and 25 rounds.

A Brief History of the IDPA 5×5 Classifier

Sometimes referred to as the Wilson 5×5, the IDPA 5×5 Classifier is a skill test originally developed by Bill Wilson of Wilson Combat. Wilson is also a founding member of the IDPA (International Defensive Pistol Association).

The 5×5 skill test was officially added as an IDPA classifier in January 2018. This short assessment replaced a longer, more time-consuming, and complicated qualifier. Unlike the previous classifier, the Wilson 5×5 requires zero stage props and takes place from a single, ten-yard shooting position. The drill is simple to run, but adequately measures the shooting skills essential to IDPA match success. Set up a standard IDPA silhouette target 10 yards from the firing line. The shoulder of the target should be 5 feet from the ground. (You can also use a USPSA silhouette. These two targets have almost identical scoring zones.)

The drill is divided into four separate strings. Each string has different shooting requirements.

First string: At the start signal, draw and fire five rounds freestyle. (Freestyle means the shooter may use either hand or both hands to control the firearm.)

Second string: At the signal, draw and fire five shots using only your strong hand.

Per IDPA rules, an “emergency reload” is when the magazine and chamber are both empty. Therefore, your initial magazine for this string should only be loaded with five rounds.

Fourth string: At the signal, draw and fire four shots to the center of the target, then one shot to the head freestyle. 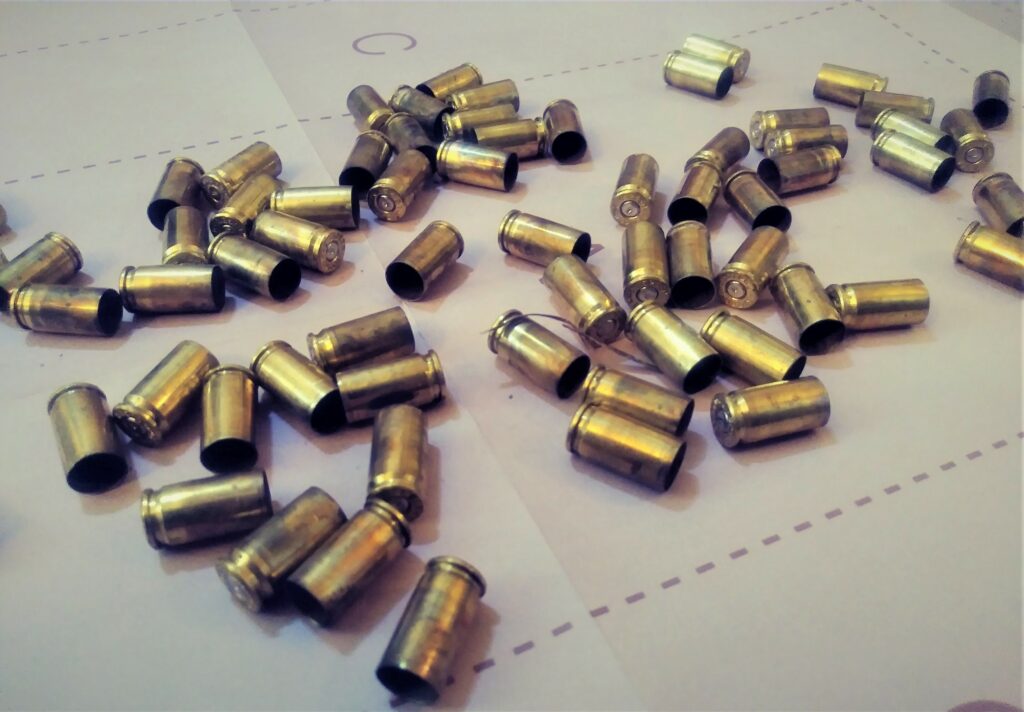 The IDPA scores the classifier using a combination of your time and accuracy. Each target has three different scoring zones – Down Zero, Down One, and Down Two.

The Down One zone is the perforated section that surrounds the center circle (Zone C on a USPSA silhouette). Shots in Down One add a second to your time. In some scoring systems, shots in Down One only add .5 seconds to your run time.

The rest of the target outside of these zones is considered Down Three (This is the D zone on USPSA targets). Shots to the edge of the IDPA target add three seconds (or 1.5 seconds depending on scoring methods) to your total time.

Each shot that misses the target completely adds 5 seconds to your time.

Your total score is the total amount of time it took you to shoot each string plus any penalty points for shots outside Down Zero.

This drill in particular, and the IDPA in general, places a premium on accuracy. Poorly placed shots can add precious seconds to even the fastest shooting time. In other words, slow and accurate will usually outscore fast and sloppy.

What It Means To Be Classified

The IDPA uses the 5×5 classifier to separate shooters into groups based on their shooting skill. By grouping shooters with similar skill levels together into the same class, the competition is more fun for everyone.

Tips for Improving Each String

If you want to improve your 5×5 score, here are a few things to keep in mind for each string of the classifier.

It’s really tempting to blaze through this string. It’s just a single target, after all. But if you pull a shot, the penalty can have a huge impact on your score.

Take your time, aim hard, and don’t take a single shot for granted.

Get into a good stance before the start signal. You don’t want to be fumbling your way into a solid stance (or worse, shooting from a crappy, unbalanced foundation) after you draw your weapon.

You also don’t want to pop off your strong hand shots haphazardly. Take your time and get a good sight picture before each trigger pull.

Fumble it, and it will cost you precious seconds.

Also, don’t forget that you actually need to aim that first shot after the reload. It’s easy to get caught up on the mechanics of the mag change and then rush the gun back on target. Don’t be that person.

Don’t rush. Take your time on that head shot.

As you can see, there is a common theme here. Yes, speed is important in this drill. However, accuracy is far more important. Fast misses are going to cost you big time. Only shoot as fast as you can shoot accurately.

The beauty of this drill is its simplicity. It doesn’t require anything fantastically complicated. However, it does incorporate all the basic skills you need for both self-defense and IDPA competition.

Most IDPA shooters DO NOT recommend running this drill regularly, at least not as a skill builder. The concern is that you may become too proficient at the classifier and end up in rank with shooters well out of your league. The 5×5 Classifier only tests some of the skills you’ll need for IDPA competition. While it provides a nice cross section, the 5×5 doesn’t test everything you’ll need.

During regular competition stages, you will be shooting from cover or while on the move. You will also need to engage multiple targets, moving targets, and targets at varying distances. None of these skills are built or tested with the basic IDPA 5×5 Classifier. However, if you focus on developing all of these skills, your time on the 5×5 should improve significantly.

That doesn’t mean you should throw the Wilson 5×5 completely out the window. It works fabulously as a basic skill test. You can use the 5×5 as a benchmark to gauge improvement.

Many shooters like to use the 5×5 as a warm-up to their regular pistol practice. Shooting the drill cold can be a real eye-opener and should shed light on your practical shooting skills. After all, if you ever find yourself in a real self-defense shooting situation, the bad guys probably won’t offer you a few warm-up rounds. You’ll be shooting cold.

Although shooting speed is definitely a major component of the IDPA 5×5 Classifier, accuracy is far more important. Each shot that falls outside Down Zero is going to cost you, so accurate shots are absolutely crucial. Just make those accurate shots as quickly as possible.