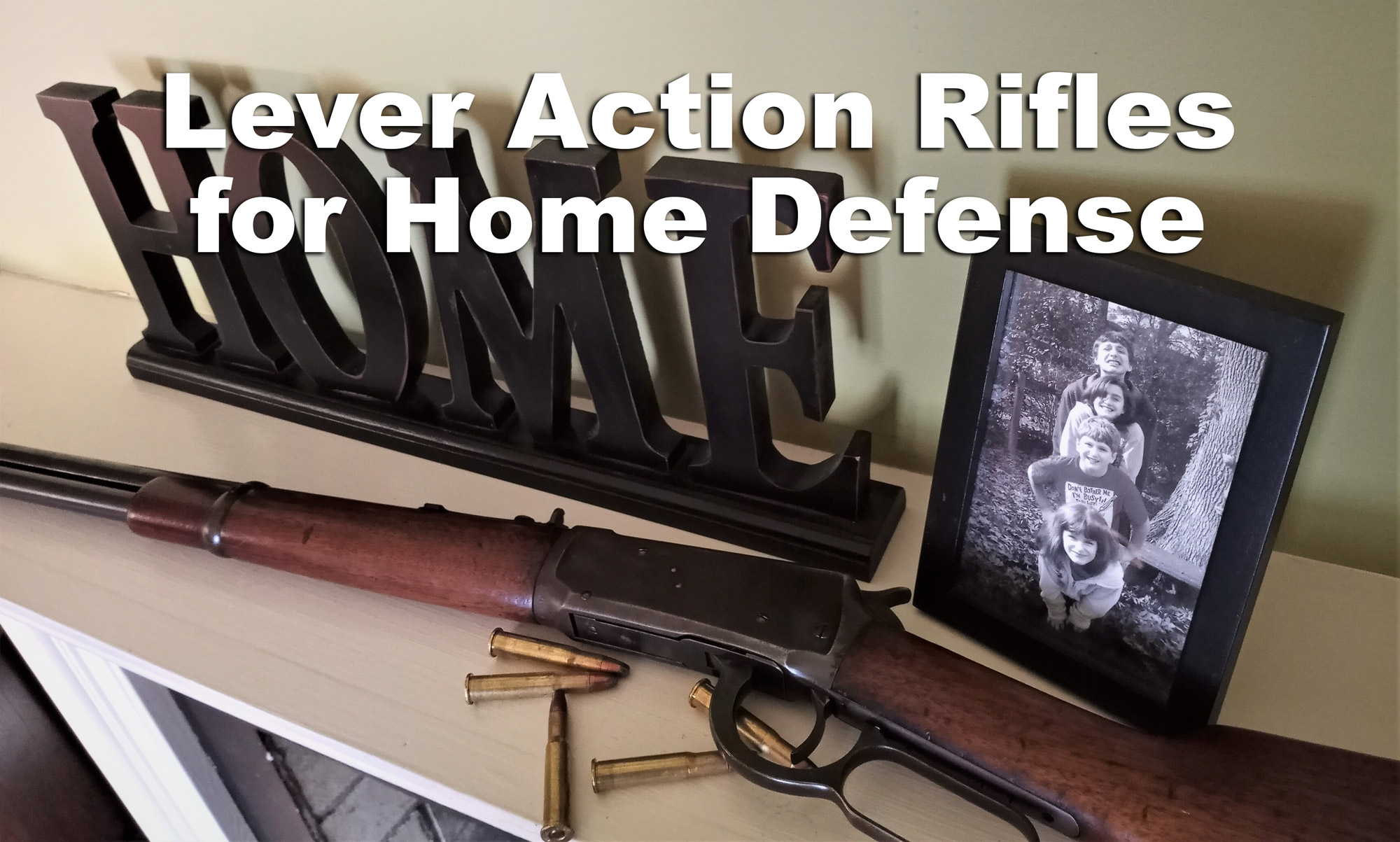 An in-depth look at the viability of lever action rifles for home defense. We’ll address their advantages and disadvantages over common alternatives.

Everybody and their brother seems to be in love with the AR-15 platform. But who can blame them? These lightweight, ergonomic, easy-shooting rifles are perfect for almost any shooting application. With this level of versatility, it’s no wonder the AR-15 platform is also a popular choice for home defense. (See our article Shotgun vs Rifle for Home Defense for more info.)

Despite its utility, sometimes the AR gets a bad rap. Unfortunately, it is often mislabeled as an “assault rifle” (It’s worth mentioning here that AR actually stands for “Armalite Rifle” and the name has nothing to do with assault). As a result, some states aren’t as AR-friendly as others (I’m looking at you, California, New York, New Jersey, Connecticut, Maryland, Massachusetts, and Hawaii.)

Also, with the current political climate, it’s hard to foresee what the future holds for the modern sporting rifle. It certainly doesn’t look like it’s going to get any easier for this often misunderstood rifle.

On the other hand, the traditional cowboy lever action conjures warm, nostalgic images of the Old West. Its old-school look causes most anti-gun activists to overlook lever actions and focus their efforts on “scarier” rifles with a more tactical look (Sorry, AR-15). Its antique appearance also causes plenty of gun enthusiasts to overlook the lever action rifle as a viable option for home defense. However, the lever action isn’t just for range-riding cowboys. There’s a reason this tried-and-true design is still going strong.

New threats seem to come out of the woodwork every day. As a result, American shooters are getting accustomed to demand surges for guns and ammo.

When firearms and ammunition fly off shelves in record numbers, manufacturers and stores have a difficult time keeping up with demand. As a result, some homeowners are forced to make do with whatever they can get their hands on for self-defense. For some, that means relying on an old, hand-me-down vintage firearm.

While any gun is better than no gun in a dangerous situation, readers may be wondering if they can use Grandpa’s lever-action deer rifle for home defense. While there may be better options, Grandad’s old Model ‘94 definitely isn’t the worst.

Let’s take a closer look at how these classic weapons fare in the area of home defense.

The lever action rifle is a truly American design. Every successful lever action ever engineered has sprung from American ingenuity. Most have been manufactured on American soil, as well.

The lever action is also deeply rooted in American history. It helped preserve the Union during the Civil War and tamed the western frontier. It has also fed and protected American families for generations.

Pair the legendary lever action with the famous .30-30 Winchester cartridge (America’s first cartridge to successfully use smokeless powder) and you have a team that has put more venison on dinner tables than any other combination in history.

The notable Spencer repeating rifle and Henry lever action were both introduced in 1860, just before the War Between the States. Union troops used both weapons. The Henry rifle was not-so-fondly referred to by Southern soldiers as the “Sixteen Shooter” or “that damned Yankee rifle that you load on Sunday and shoot all week”.

In 1894, Winchester released its famous Model 1894. More than 7 million Winchester Model ‘94s have been sold to civilian shooters over the past 125 years, more than any other rifle design in history.

America’s second most popular lever action, the Marlin Model 1893 hit the market around the same time as the Winchester ‘94. This one featured a single stage lever action. Marlin’s lever rifle also featured a solid top and ejected spent cartridges out the side. This helped keep the action free from dirt, debris, and water. It also allowed shooters to pair a scope with their lever action rifle, something previous, top-ejecting models didn’t permit.

Another notable development in the lever action design came with the Savage Arms Company’s popular hammerless Models 1895 and 1899. Unlike earlier lever actions, the Savage rifles featured a rotary magazine in place of the long tubular magazine design (later Savage models were made with a detachable box magazine). This allowed shooters to use more aerodynamic spitzer bullets, which improved ballistic performance and increased accuracy.

Even though we are well into the age of modern firearms, the lever action isn’t going anywhere. The famous Winchester ‘94 is back in production (after a brief hiatus) and the Marlin ‘93 has been reliably in production all along (although it has had several name changes). Shooters can even find options with a more modern, tactical feel (Check out the Marlin Dark Series and the Mossberg 464 SPX). The lever action rifle is definitely here to stay.

The Pros of Using a Lever Action Rifle for Home Defense

Modern gun culture often tries to convince us we need high-tech, mil-spec weapons if we’re serious about home defense. However, the average American is unlikely to need sniper-level accuracy beyond the boundaries of their suburban front yard. Nor is he (or she) likely to be involved in an extended firefight with trained military combatants. And (as depressing as it may be), the garden-variety homeowner won’t need to defend their split-level ranch from swarming hordes of brain-eating zombies. 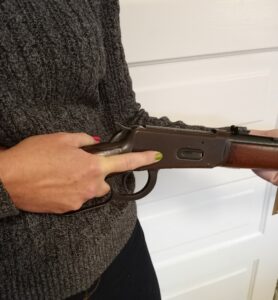 Most home invasions involve confrontations that are relatively short-lived and demand an effective close-range weapon. If you live off in the boonies, your needs may differ from the average city dweller or suburbanite (especially if you have dangerous, four-legged neighbors). However, the venerable lever action works surprisingly well in both scenarios.

In a self-defense situation, a lever action can be more intimidating to a dangerous threat than a handgun. It’s also substantially easier for new or infrequent shooters to shoot effectively.

The average lever action is also insanely reliable (there’s a reason these rifles have been around so long). The short, carbine-length barrels on most models make them easy to maneuver through the sharp angles and tight confines of hallways and interior rooms.

Remember, lever action rifles were originally designed for fighting and self-defense, and they still do those things quite well, even in this modern day and age.

Lever guns can be found chambered for everything from the rimfire .22 LR to the big, beefy .50 B&M Alaskan. While neither is a particularly smart pick for home protection, there are plenty of defense-worthy options in between.

.30-30 Winchester is the most common lever action chambering, followed closely by the .45-70 Government. These are fine cartridges for deer hunting. However, many homeowners prefer a lever rifle chambered in a pistol caliber for home defense. Not only will a pistol caliber lever rifle produce milder recoil, the ammo tends to be cheaper and easier to find.

A rifle chambered in .357 Magnum / 38 Special, .44 Magnum, or .45 Colt can be an excellent option for a defensive rifle. Pistol cartridges can also help reduce the over-penetration concerns that come with traditional rifle loads.

If you’ve ever watched cowboy action shooting competitions, you know the professionals can pop off rounds with blistering speed. However, even the fastest hands in the west can’t shoot a lever action as fast as a semi-automatic rifle. 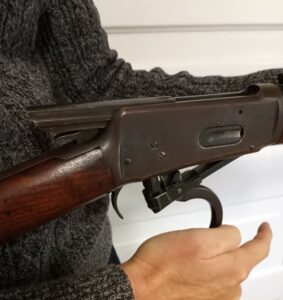 One problem that inexperienced shooters often face when shooting a lever action in a high-stress situation is short stroking. Short stroking happens when the shooter fails to push the lever all the way forward before pulling it back to the starting position. This can prevent a fresh cartridge from properly loading into the chamber. The best remedy for short stroking is practice. Familiarity with your weapon is always an asset, no matter which type of firearm you choose.

There are some lever action models that take detachable box magazines (like the epic Browning BLR). However, most models with detachable magazines are designed for hunting and come chambered for hard-hitting cartridges that can be problematic for home defense.

One of the major gripes about traditional lever actions for defensive purposes is their relatively limited magazine capacity. Most models only hold seven or eight rounds. Plus, these weapons aren’t exactly easy to reload. However, most home invasions don’t require massive mag dumps to neutralize a dangerous threat.

In a home defense situation, you should be topping off your magazine whenever you aren’t shooting, even if it’s one round at a time. With some practice, you can learn to easily load rounds without removing the rifle from your shoulder. A butt cuff with bands for holding cartridges makes a handy accessory, keeping extra ammo easily available for reloading.

The standard iron sights on most lever action models are adequate for most self-defense shooting.

Want to go one better? Replace that rear sight with a large aperture ghost ring. This will help get you on get your sights on target faster.

Mounting an optic can be problematic with traditional lever actions. Others easily take a receiver-mounted scope. However, a magnified scope is more of a hindrance than a help in defensive shooting. If you want to bring your lever action into the 21st century, consider mounting a red dot or reflex sight. You’ll probably need to mount it forward of the receiver (like for a scout rifle). You may also need to replace a solid cheek weld with something more akin to a chin weld. However, a red dot can help inexperienced shooters get shots on target faster and more accurately, especially with the massive adrenaline dump that typically accompanies a dangerous home invasion.

While a lever action rifle may not be the top choice for a home defense weapon, you can certainly make it work. It’s important to remember that these American icons have been defending homesteads for well over a century. In fact, these lightweight, easy-to-shoot rifles were really the AR-15s of their day. Let’s just agree not to tell California.